What happened in October 2016

I hope everyone had a nice weekend and you’re ready to hear the latest news about everything that has happened - in front and behind the scenes in the last 2 weeks!

Challenge #1: The challenge #1 has come to an end! Congratulations to both our winners @garry and @paulinuas! [For more info about everything check here] (http://dough.community/t/challenge-1-the-critic-review-tech-get-a-prototype/1680/37)

Keyboard: After china where the team could lock everything for our keyboard, @mike worked really hard the last few days to get all our requirements forwarded to the keyboard manufacturer! Look forward to more information regarding the keyboard after we’ve got the confirmation from our manufacturer!

China: On Monday the team came back from a very intense trip to china! After too little sleep the team made many preparations for example sorting out the shipping, locking down accessories that will be included in the box, like the charger & charging cable.
Most of the time went to polishing small details on every corner of the product and making sure that in every single detail the project “Pyramid Flipper” will with your help bring a device that will flip the market!

Naming: @nawthor came up with a great idea as a name for our project - V so the device would be called Eve V ! [What do you think of it? Make your voice heard here!] (http://dough.community/t/the-eve-v-a-flipped-pyramid/1763)

Confirmed Specs: As pointed out by @cane_prevost we were missing a overview which specs have been confirmed for the project “Pyramid Flipper”! [We’ve fixed this and you can find the overview here!] (http://dough.community/t/pyramid-flipper-confirmed-specs/1780)

And that’s all everyone! The china trip was intense and locking down everything took quite a while, but the team is happy with the results of the trip! Expect the next news in 2 weeks at latest - maybe next week as well depending on how many things progress!

Wish everyone a good sunday and a great start in the week!

2 weeks have passed since the last news - so it’s time again for me to bring you the news about everything that happened behind the scenes and in front of it over the last 2 weeks!

Gorilla Glass : @Alexandr_Smirnov (previously known as @Ivan) posted a very interesting thread that discusses that Gorilla Glass not equals Gorilla Glass. [Have a look over here and leave your opinion there as well] (Can a thin case really save OnePlus 3 screen from shattering? – Let’s talk about Gorilla Glass)

Corporate Nonsense : Another great thread by our awesome community - @AntonyTerence pointing out some of the corporate nonsense by Lenovo - this time with a battery that was roughly 30% smaller than previously announced. [Read it & state your opinion over here] (Corporate Bull$#!t, As It Happened)

Silence before the storm : And this is the main thing on this news regarding what the team did.
The last 2 weeks have been the “silence before the storm” which is why there were no threads from the team coming up - we were working on a huge amount of stuff behind the scenes. Working out the pre-production, planning and producing the video. 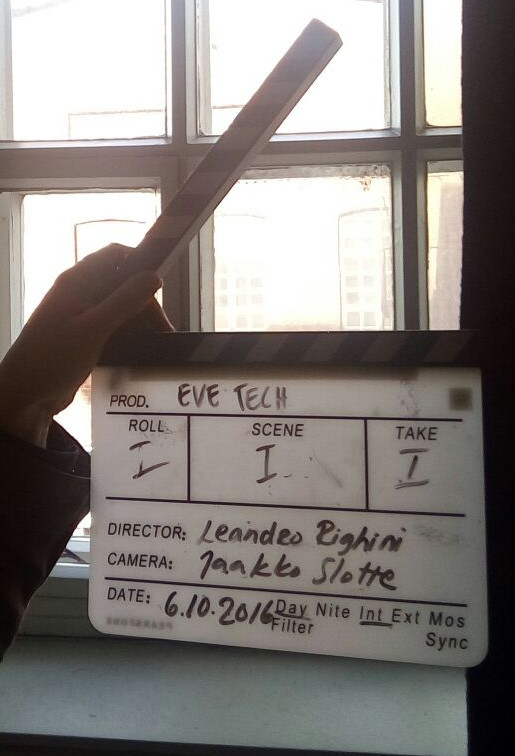 But, now a storm is coming - the next week we’ll bring you more infos for about our IndieGoGo campaign and more! So watch out over the next few weeks to catch all the news that will come out!

That’s all folks! Prepare for a slew of information until the next Eve-News in 2 weeks - and feel free to post whatever you see and are interested in for a chance to get a small highlight in the Eve-News as well!

I wish everyone an awesome start into the week & enjoy!

Q&A session has now ended. You can still find it here (click). 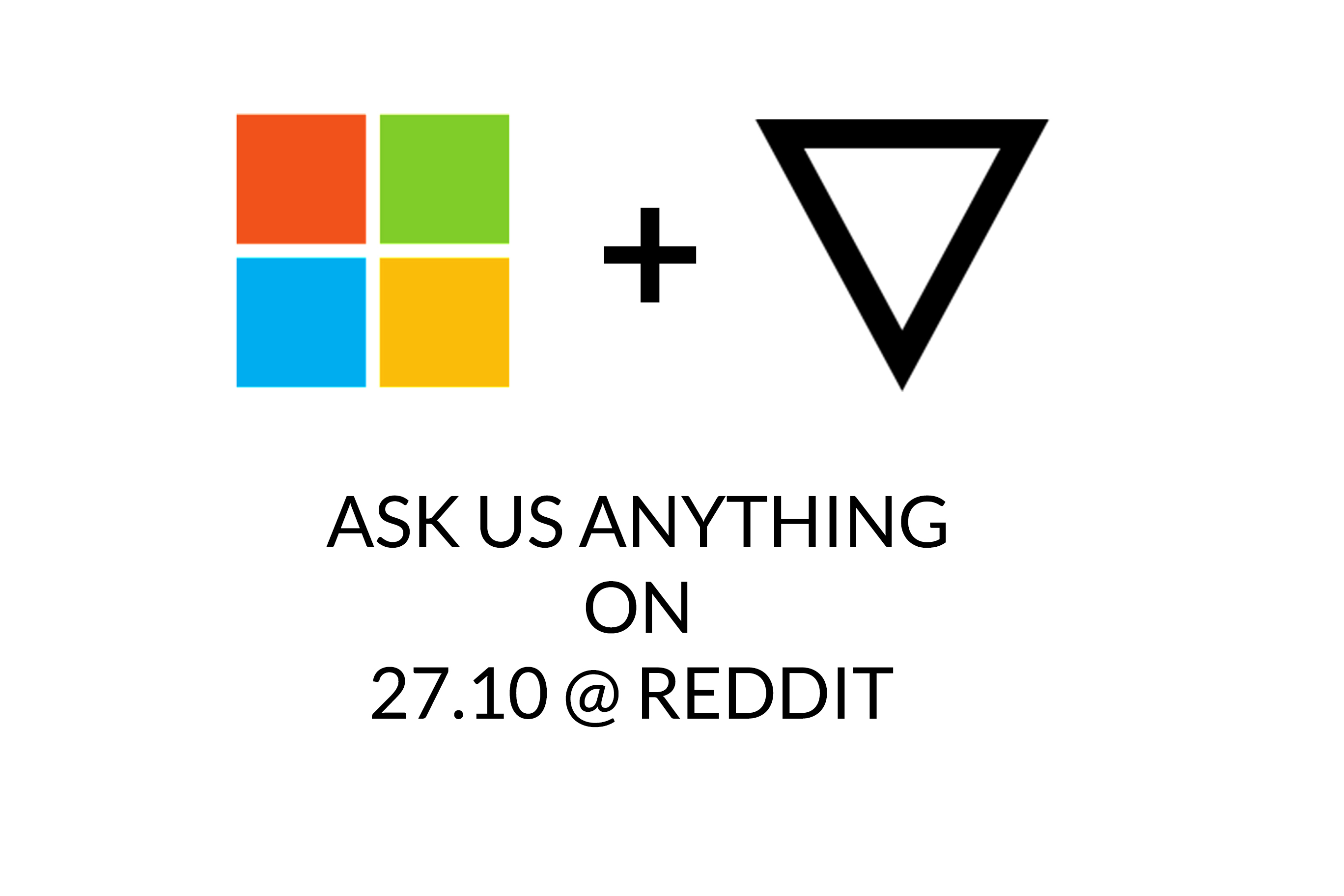 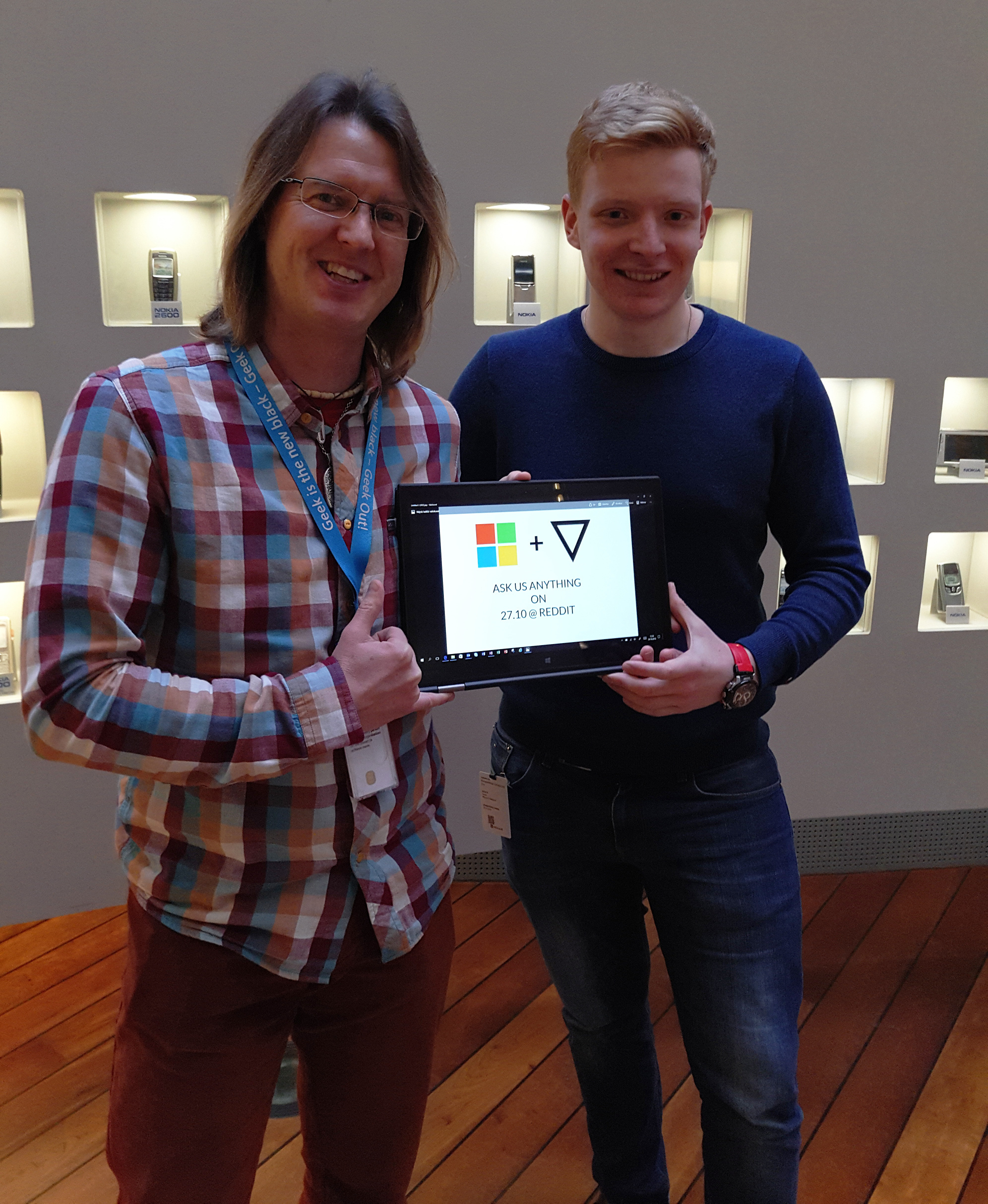 Prepare your questions you want to ask us or Microsoft (almost) anything!

Once the AMA is live, this thread will be pinned to the top of the community. Be sure to not miss it!

For example, if I buy a protective case from you, and after 4 years of using it I break it, I should be able to just buy a new one from your web shop. Or if the tablet breaks after several years, I should be able to easily get replacement parts. And not just you and Riku scavenging parts from unsold models, but… a way to obtain them through an official channel (like your website).

Hi Pauliunas. Thanks for the encouraging comment & good question.

As you know, we very much love to operate this business lean .

This would occur if, let’s say, the life cycle of the product is something like 24 months. After that the demand for the protective cases goes down significantly. No demand = can’t order big quantities. In that case your suggestion would require us to pretty much stock those cases for the forecasted after demand of 24 months extra.

Now to the second part of spare parts / repairs.

We’ve been very supportive to all our T1 customers. T1 had a 1 year warranty, which is reasonable considering it only cost below 159 eur. With T1 we carried extra amount of devices reserved for warranty cases. Exhanged T1s served as sources for spare parts.

This way we could re-use most of the components to repair old & broken devices. That we have done following this process very generously even for the people who’s warranty has already expired.

Coming to the the V, we intend to follow exactly the same protocol. With the V there is however many differences:

I don’t think you have anything to worry about. Why would we go all this way, spend all this time, money and effort just to disappoint our customers in the end

October 27, 2016: Should we implement a referral program?

Not so long ago one of our very active community members pitched us an idea for the referral program. We gave it a though and it actually sounds quite cool!

The idea is super simple. here it is below:

So every time your friend makes a purchase using your unique link (we would provide it to you) you get X dollars back (as amazon Gift card). Once your friends purchase X Eve V’s you get Eve V for free!

Why we think its an interesting idea?

As we discussed in some threads before we primarily rely on new and smart ways to spread awareness of the Eve V. Who could be better at spreading the word about Eve V than our community members who actually co-developed the device

? But we think people helping us spread the word should be rewarded. As to sell the device we need to spend X somewhere. It is better to give X back to the community than to some Facebook ad

As always we would not take such a major decision without hearing your thoughts! What do you guys think of it? So here comes the question:

Would you like Eve to try out a referral program?

Some examples of companies that used referral programs for marketing at start: 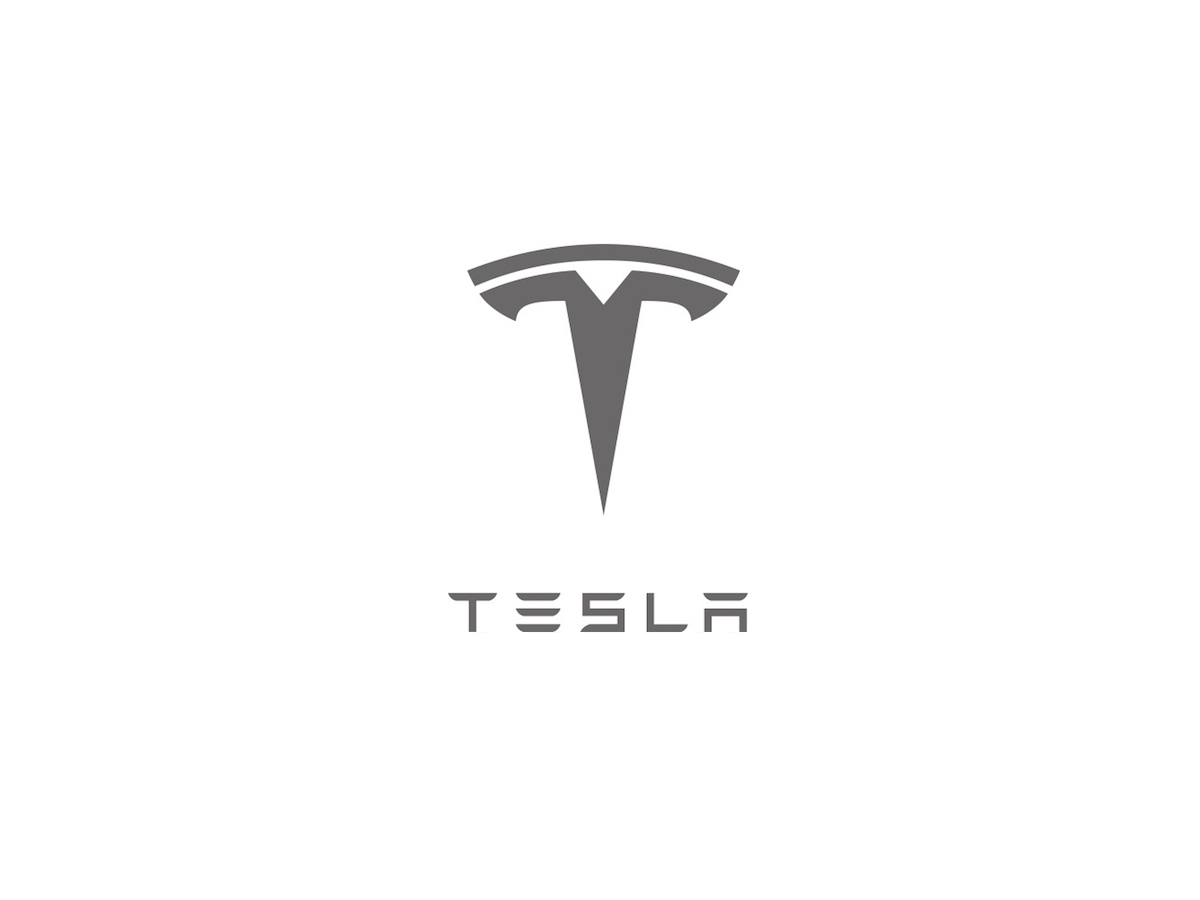 Tesla customers can give friends exclusive benefits with their personal referral code. 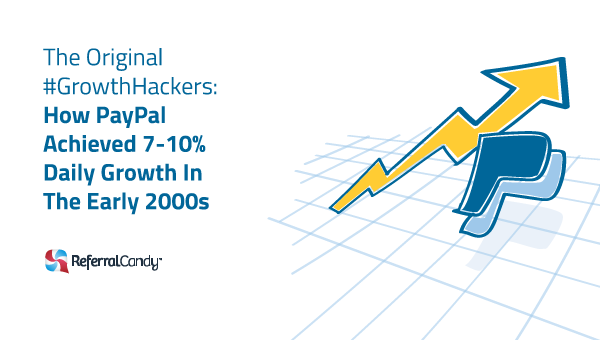 Not many people today know that PayPal ran a very successful referral program, long before Dropbox did. They literally paid people to refer their friends!

It’s been 2 weeks since the last news and many things have happened, so I’ll just cut right to the action!

Steps to Reveal: A new thread that we’ve launched just for you to summarize everything that has happened and will happen in the upcoming weeks. It’ll be updated on monday every week, [so be sure to check it out here every regularly to see what has been happening!] (http://dough.community/t/eve-v-steps-to-reveal/1918)

Eve V - IndieGoGo & Name Reveal: The first big announcement we made in the past 2 weeks regarding the V. We revealed the launch date for our IndieGoGo campaign, the 21st November and the official product name Eve V . [Click here to read everything in more detail in this thread.] (http://dough.community/t/big-news-indiegogo-launch-pyramid-flipper-official-name-intel-investment/1905)

Spec Reveal #1 - CPU, RAM & SSD: And the second big announcement that happened over the past weeks. This time official revealing the major performance components of the V and giving you a little insight why different components were chosen and also how you, the community , influenced the decision for those components in a major way! [Click here to read more!] (http://dough.community/t/eve-v-confirmed-specs-1-cpu-ram-storage-connectivity/1997)

Eve AMA with Microsoft: And the last major event that happened this week - our AMA with Vesku from Microsoft! We were overwhelmed by the amount of people that joined us and asked various questions about Eve, Microsoft, both of our products and more! [Have a read on this thread to find the AMA & read up everything that was asked] (http://dough.community/t/eve-microsoft-q-a-has-ended-thank-you-all/1969)

And that’s all folks! This time we had no real news behind the scenes again. Tomorrow, October 31st the Steps to Reveal will get the next update to show you what we’ve planned for that week, so maybe have a little peek at it later! Thank you all for your support and continued engagement in the community!

I wish everyone a great start into the week with a spooky halloween!