Hello. Community knows best, since here is a question of personal preferences.

So I ask you a very simple question:

Whose tech videos do you watch on YouTube? (if anyone’s)

This is naturally related to Pyramid Flipper. Once our gem materializes further, we must have unbiased, savvy people looking at it and showing it to the world. Also on YouTube.
And the best way to start scavenging this topic is to tap into your habits.

``
ps. I actually prefer reading over videos (yes they are a different thing, I know), but I do keep a close eye on the big usual suspects. Linus, Austin, Marques, and others. I probably should take a closer look on new and upcoming ones as well. Please hint me some!

Here it is, the spec-tacular name poll!
The sole purpose: Find the best name for our computer of project “Pyramid Flipper”

Read this message before you head out to the clicking part.

“Pyramid Flipper” is a crowd-developed, ultra-portable computer. A 2-in-1 with great performance. Namely, the unbeatable computer. You have done it. It is delivered to you by a global Finnish player Eve whose first product was “T1”. And the computer deserves a great name. That’s the background.

The upcoming name will hopefully: Embody the spirit of the device, include the community perspective, stand out in internet searches, differentiate from peers, be descriptive enough, create a positive/inspiring emotion… This can be too much to ask, but you’ve delivered diamonds before!

More help on product naming, and things to think about while doing it, can be found here:
10 Tips how to name a product 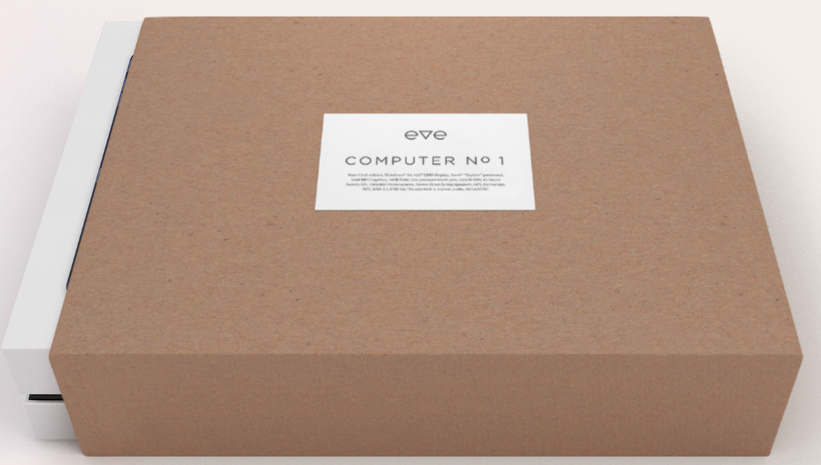 YOUR MANDATE IS CLEAR: HELP US FIND THE BEST NAME

Below you will find a massive poll, where we have listed all the name suggestions that were given in the previous thread (found here).
The suggestions have been divided into several polls since dough.community allows only 20 options in one poll. We can always count the exact number votes of a certain name candidate with simple equation
Count = % share * number of voters in that poll.

Now YOU vote for the best, one or more, suggestions. After next week, we will have the TOP5 chosen by dough.community. And then we head for the final naming stage. Please note that the suggestions in the poll can be reshaped later on, as in “Chimera” can be transformed to “Eve C1 Chimera” for example. So don’t be too picky on the exact poll options found there.
(You can use the “search” -function of dough.community to search for more background on any name suggestions, if the person posting it gave any. Or you can read the entire thread here.)

``
One more important thing to note!

Eve holds the veto right for choosing the name.
If something like Computer McComputerface wins, we likely won’t call it that. Or if for some odd reason the community ends with a name that is just completely “off” in our view, we might not go with that. This isn’t being mean, this isn’t disregard for your views. This is realism. What we want is to summon your creativity and intelligence, and help us find the best name for “Pyramid Flipper”! But we have to keep our head between our shoulders as well. This is a product that people outside the community also need to find and understand, for example.

Some examples of how names take their role:


``
And if there are more suggestions, type them to this discussion thread. One suggestion per message. “Likes” given to that name act as votes for that name. And further discussion also gives us all more food for thought.

GO AHEAD! (Polls will close after 17th of July. This year.)

I just came back from a vacation in Portugal I had with my family. I wanted to clear my head and prepare for the big battle ahead. I have been just updated on the latest project status and can tell you that we all managed to create an amazing product together. Thank you all for your help. We will soon show you latest renders, prototypes and not so far away is the actual device.

Sorry for the long Intro

I am actually writing this post in order to proceed with Pyramid Flipper Final name.

After @Riku ran a naming poll with whooping 117 option you all guys suggested it seems that there is absolutely no distinctive name winner(see results here http://dough.community/t/v-i-p-poll-decide-the-name-of-our-computer/). That is completely understandable as after all it doesn’t matter what the name is. It’s the actual product that matters the most!

As you know we are really tired by deceptive marketing messages by big corporations and our biggest fear of all is to deceive you guys. The name is something that you earn not give. Our name will be backed up not by empty words and promises but by an actual product designed by our enthusiastic community.

According to the poll, most of the people still like the name Pyramid Flipper but are afraid that it might not be understood by outsiders or is too hard to read/pronounce. This name is loved because it stands for something and actually has a meaning of changing the way products are developed forever.

So here is the suggestion:

We name our product Eve and add a.k.a. Project Pyramid Flipper.

By doing so we give it the same name as our brand and it would show that we are actually betting our whole company future on this device. We show that we don’t give any promises and ready to bet big. We keep the name minimal and clear so that other would easily remember it. essentially people will call it Eve 2-in-1 or Eve Computer.

We should not be worried about future product families as once we decide to create product family we will come up with the solution.

Some people say end users don’t know what they want. Some say Eve is vapourware.

It’s now or never we prove the world that people know what they want from the product! it’s time to create the Unbeatable 2-in-1 Eve a.k.a. Project Pyramid Flipper