What happened in February 2016

Thank you all for your feedback and participation in the discussion.

This Advisory Discussion Thread is now closed and the development continues on other threads.

Advisory specification of Pyramid Flipper is now released and we will begin sourcing for the components.

click here to join the discussion regarding the summary

Last time we talked about the Stylus pen and cameras. We’ll be shooting out a blog post summarizing the discussion so far. At this point we’d like to offer our thanks to all voters and participants

Today, however, marks the beginning of the discussion regarding the CPU.

Let’s remind ourselves right now what Pyramid Flipper is all about: 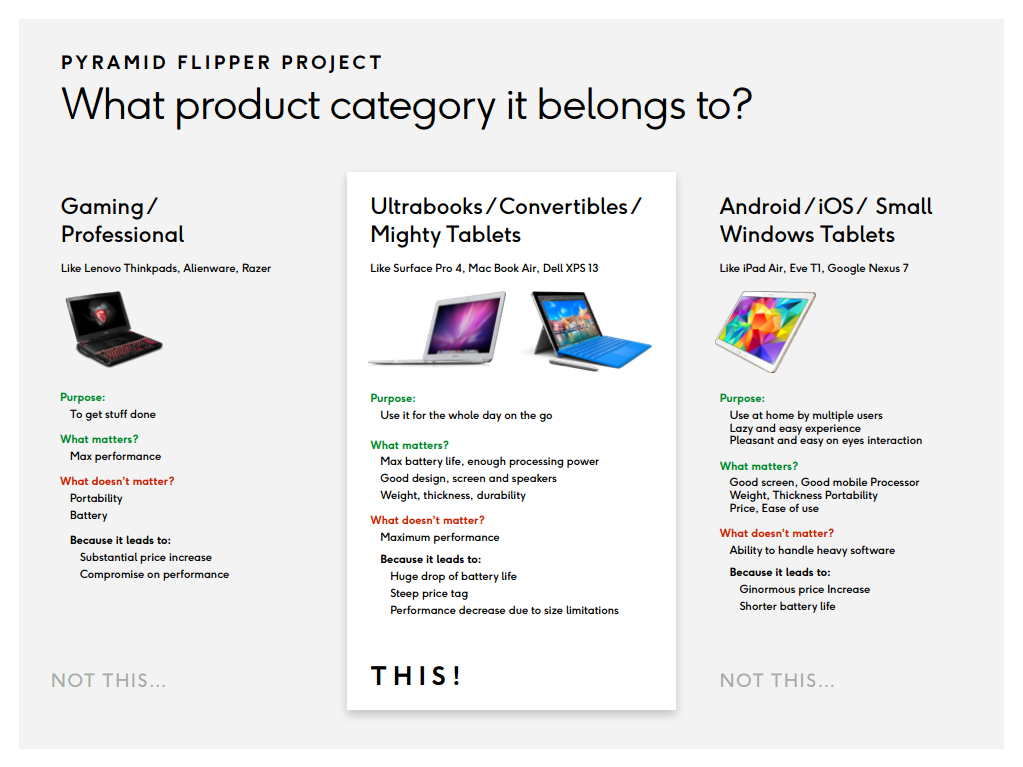 As shown, we are after a portable device that can do basic work and excel at media consumption.

Intel, which is the market leader of x86 architecture chips (required for Windows usage), offers currently a few different chips that we could consider (intel N / celeron, Xeon and similar “out of scope” chips are left out on purpose)

Atom series
Very low power mobile chips, with power consumption of 2W. Intended pure tablets and mobile phones. The latest generation of these chips were announced a bit before Skylake, and are known as “CherryTrail”. The most famous device equipped with one of these chips is Microsoft’s Surface 3 (non-pro, with x7 8700 version of the chip - the most powerful of the atoms). Geekbench score is usually around 800 for single core and 2000-3000 for multicore (depending whether an x5 or x7 version is being benchmarked).

After releasing the Core architecture, Intel finally beat AMD in an on-going arms race for CPU performance. Core is became the de facto performance standard for many hobbyists and enthusiasts.

What is also important to take to this discussion is the fact of benchmarks: Intel Core M vs. Intel Core i

The most important thing to know is that the difference in performance between core m and core i series is not as huge as many seem to think.

Have look at the benchmarks of Surface pro 4 with i5 and Lenovo miix 700 with m5 that we have reviewed last week.

According to the Geekbench test surface Pro 4 scored 5663 points for multicore performance which is only 12% higher score. In single core benchmark test the results were similar. Most of the basic tasks are done with Single core of a processor.

The difference would be unnoticeable as real processor intensive tasks require at least score of 10 000. Both core M5 and Core i can handle most work easily, exception being heavy duty work (such as 3D rendering, 4k video rendering, etc)

Basically Core i and Core M are equally good in most of the tasks and equally** bad** at heavy duty work.

A choice between a lower powered Core i and Core M would not effect the price of the device noticeably.

Core M, however, has over three times smaller TDP, resulting in significantly better battery life. Its fanless design also makes slimmer designs possible. Devices with Core M also tend to run cooler and quieter (because of TDP and not having a fan).

Now we talked a bit more about Core M, because it hasn’t gotten the attention it deserves through the massive improvements brought along with the second iteration of these chips. Read here, why Matt Smith from Digital Trends decided to take a Core M device for his mobile duty @ CES2016

Going with Core i

For above reasons the Team Eve feels core M will deliver the best experience.

Which one do you think is better for the Pyramid Flipper?

A deeper look at our new Eve V