I hope you don’t find these comparisons annoying. But that’s what we were guys able to achieve 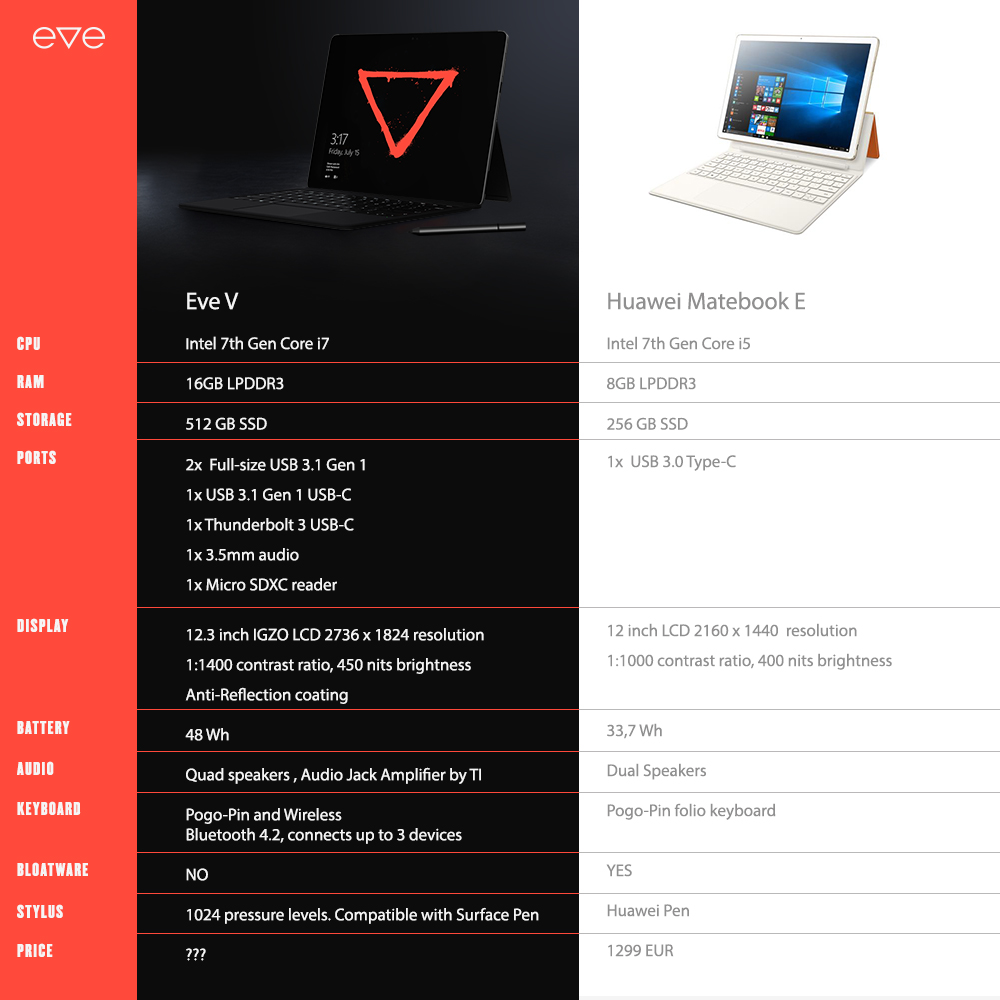 Maybe comparing the i5 versions is fairer

yeah, i5 may be a better comparison. unless the i7 model will sell for 1299 EUR

Huawei loses in every category, screen not as bright, no free angle, smaller battery, less ports, more expensive for comparable models, not available with 16GB RAM.

But hey, at least it has bloatware.

Is it possible to put together a single slide with all the new machines side by side, I think it will show where the V shines.

I think you will be asked this question over and over, is there a possibility for upgrades or trade ins as a version 2 or 3 of the V becomes reality. Expandability of the SSD, for example is one area, swapping the motherboard with an enhanced chip may be another, swapping the V for an LTE version may be a third,

I know I am thinking futures, given this group there may be an aftermarket swap meet site need, maybe it belongs in the community, maybe it doesn’t. I am not sure but that is the type of thing that will go very well with the crowdsourcing mantra of the V.

I like that idea. I would possibly be interested in upgrading from the m3 to the i5 model later on, I just didn’t have the cash flow at the time of the preorders to foot the bill for one.

as a version 2 or 3 of the V becomes reality.

Who told you there would be version 2?

Are you still undecided of the price yet?
You should definately release it for Computex, to have the people compare the price, which is quite important.

come on, there will always be a version 2

As an LTE version is predicted it’s only about the naming, but this will be a second version of the V (however it’s going to be called).

Just like with other tablets, it’s just another variant, not a whole new version. It’s like our M3/i5/i7 models - they definitely cannot be called v1, v2 and v3 because it’s the same design with only minor specifications change. Except that LTE launch is delayed.

Our three different processors don’t require any further adjustments. It again is wording, you are allowed to call it revision 1b if that’s more to your liking.
Plus, there almost certainly will be an adjusted version next year (as this is the easiest in regards of development costs).

But the day is just too nice to “fight” over wording

Don’t really care if they call it version 2 or 1b, there will be enhancements to the V at some point. The real question is whether the early adopters of the V (aka all of us) can benefit in some way from the enhancements.

Ehm, it’s honestly really not safe to say. If the team stays this size and they develope something like a laptop then it would be really hard to also improve the V during the R&D for the new device. I’d stay with the V being a one-time thing until we know what the future plans are. Right now it’s just not known and not particularly likely. Especially given eve’s hunger for something new

Plus, there almost certainly will be an adjusted version next year

There was no revised version of T1, so I don’t think they would just update it… The V will sell well because it’s revolutionary. If they make an incremental update, it’s not revolutionary anymore.

there will be enhancements to the V at some point.

The answer above applies to this too

There was no revised version of T1, so I don’t think they would just update it…

The V and the T1 are two total different animals. As you’re not speaking on behalf of Eve, your guess is as good as mine.

@SyrtakiVampir I agree that it would be a challenge, but still not impossible. Also -as Eve is a company after all- their intention most probably is to grow. But I agree, it’s to early to definitely say.

I don’t remember where, and thst was a long time ago, but either Konstantinos or Mike once said they don’t really want to grow. The beauty of Eve is in the small team and their agility, they’re able to change things on the fly and listen to the community like that. They want to make a living from it and create great devices for people by people, not to grow into a multi-billion company. Just relaying what I’ve heard

Sure our guesses are equal, but they’re not really guesses. My suggestion was a prediction based on what we know. So pretty much the prediction that’s based on more solid facts should win…

My point is that the biggest advantage of V is that it’s completely different than anything else. And that’s an advantage of not only the tablet, but also Eve in general. I don’t think they’d miss out on this and spend time on updating old products instead of using their community power to create something actually new and groundbreaking, just like Eve V