Hi there,
got my Spectrum today. I already updated the firmware to 104. Looks nice so far but as others already posted i got the black&white issue while trying to play guardians of the galaxy in hdr.
Beside this known issue i wonderes why i am not able to stream 4k hdr content via amazon prime? I have tried several movies and shows declared as 4k hdr in prime but always only get 1080p. Somebody got the same problem? After a bit of research i found out that win11 does not recognize this monitor as hdr certified… 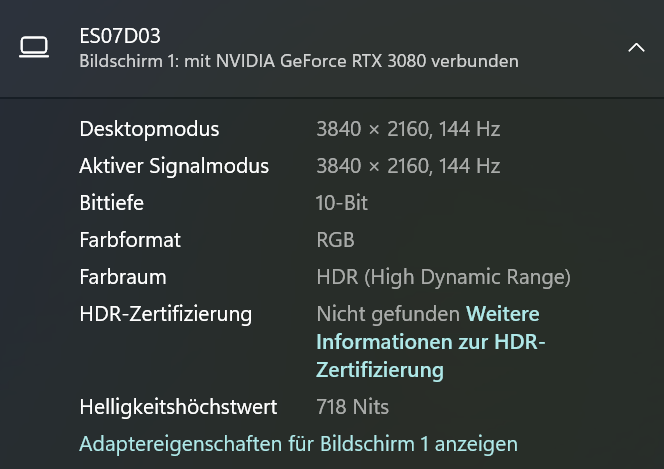 There is a bug with hdr on while playing games. Eve is looking into it. last i read they found a solution for AMD gpu but are still working on a solution for nvidia. i’m not having any of those issues luckily(rtx 3070) and i can play 4k movies fine on amazon. i’m running on firmware 104. Vesa has the monitor certified. Certified Products - VESA Certified DisplayHDR™
you can try the previous firmware. some users are having less issues rolling back to the previous version until eve comes up with a better firmware update. previous firmware file is here. Safely rolling back to 102R875 from 104.zip (dropbox.com)

You are watching Amazon prime via the app/website on Windows 10/11 and see it display UHD/HDR content?

I’ve never seen it stream beyond 1080p and zero HDR support (even when content lists both of those features as available). Only via dedicated streaming devices (roku/appletv/built in tv app) have I seen uhd/hdr.

What is the fix for AMD?

AMD having black and white issues (greyscale). They did tests with hdr & color tone mapping to which helped fix the greyscale on AMD. So far no solution for nvidia which has similar issues.

The AMD will come via a firmware update at some point in the future. No idea when that’ll be though.

I’m hoping a firmware update to be released in Dec. Right before christmas. Eve way of saying merry christmas to everyone.

Hi,
thank you for the provided information.