I would like to reintroduce an Idea which was presented here multiple times ago in different forms, which has now gotten some media coverage again through a new product on Kickstarter.

Introducing the VS the V Screen, a mobile screen, using everything from the V, but the motherboard.
A mobile screen, with battery, touch input (finger and pen!), port expansion (USB C/Thunderbolt passthrough, USB A, Headphone Jack!, a micro SD Card reader), speakers and maybe even cameras (to be able to reuse the complete original case)!
I know the speakers are not that great, but still better than none.

I would simply try to build a new logic board for the V, without a computer on it and use the USB-C Ports as Video Inputs and connect all the peripherals included to the Computer via the USB Protocol.
This would be very cost-effective since the (really great) panel of the V can be reused together with the body and the battery.
The power button could be replaced with one without fingerprint reader and the volume controls could be used to control functions of the screen itself and volume of the internal speakers.

This would target creatives which would want to have a cheap display for their existing PC with pen input and nearly everyone who would like to take a secondary display with them on the go.
With the ability to connect the display via USB-C it could be used with phones too and could even double down as a power-bank for the device used. (Maybe via USB-PD)

Since most parts of the V can be reused for this, the development cost would dramatically decrease, since just display drivers and some Thunderbolt/USB-C dock parts would be needed to build the device.

Maybe it is even possible to get the screen working wirelessly, but that would require major development work.

What do you think about this idea? Would you buy/want a Product like this?

Older Posts about this topic

Some of these Posts suggest using the V itself as a display for a PC, which I am not suggesting, but it would be still relevant for people who would do this with their V.

Sorry if I forgot someone’s post, just ping me and I will add it to the list

Yes a great product that can be worked upon. Would love to see something like this materialize.

Room enough for a 12H battery I suppose.

This would be fantastic, but I have some concerns about the price tag as the $240 for the 1080p one shown in the aforementioned video is pushing the limits of what is reasonable to pay for a monitor. A quick google search yields a monitor at 144hz with a bigger display if portability isn’t a major concern. Don’t get me wrong It would be pretty awesome to have one of those shown monitors shown in the video, but I don’t think that the portability is worth the cost unless Eve can bring it down significantly from that monitor. Eve does have a history of shockingly more affordable products than competitors if the V is anything to go by.

I’m not that I’m saying that an Eve sized monitor is a bad idea, as a matter of fact I was hooked as soon as I saw this post and I am quite possibly going to try to pick one up as soon as possible when they come out.

Thanks for your Input.
But protability and touch/pen Input would be the USPs for this product. And important to consider too if you search for a competing product.
And after a short search I could not find any small displays with touch and pen Input. And keep in mind, that the Vs Display has excellent colors too and more than full HD.

If you need a Display for your desk this will probably be the wrong product for you, but there is still #development:monitor-development

It would be useful as a wireless second display for writing or touching as a presentation tool to a bigger screen or projector. The user could then walk around the room.

Personally I would like something like the HP Elite x3 Lap Dock. I recently got the S10 and a Lap dock would be a solution to replace my laptop by using Dex. Perfection would be to take the VS screen, attach a type cover to it, plug my phone in via usb-c and then I would be able to use it like a laptop.

Also I would like to see a battery in the screen to achieve true portability.

The Question is, if it is possible to have a smooth wireless experience while still keeping the cost down.
But it would be worth looking into it.

Do you know any wireless Display technology which is also able to connect peripherals?

Using the V keyboard with my concept should be possible, since the keyboard is just using the USB protocol via the pogo Pins. And it could be also used via Bluetooth.

How would you like to connect the keyboard to your Phone if not via Bluetooth or the pogo Pins? 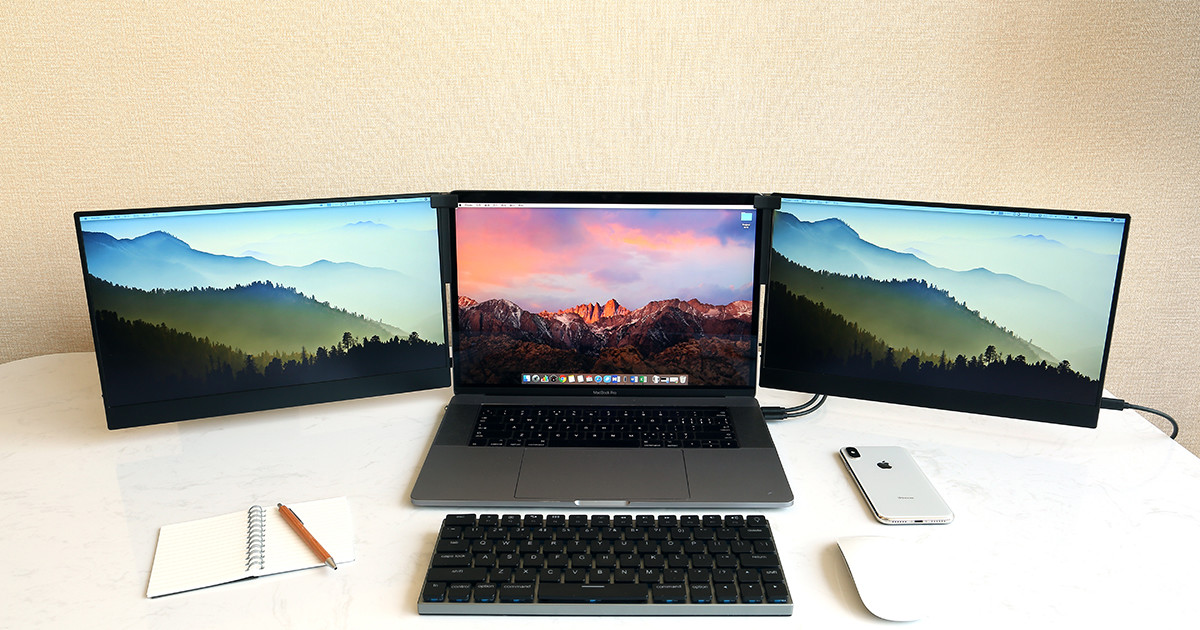 hmm could work if the keycoard is attached to the monitor - maybe even a “common USB” one - if the monitor can handle the connection to the device like via usb-c daisy chain stuff ?

The Vinpok looks great thanks for sharing. But it lacks an internal battery, which would drastically increase the screen-on time of the connected device. Furthermore it is bigger than the V sized 12.3" display I am purposing.

The USB Ports would just be connected via the USB C Port to the laptop and would effectively just be a hub inside the display where all peripherals connect to, including the Vs keyboard if we leave the pogo-pins on the product.

I personally like the idea of using as many existing parts/assemblies as it should drive do production costs while also hopefully driving down the cost of any Eve product using said parts. Maybe that’s just the accountant in me talking! I don’t imagine that these would be massive sellers for awhile so again the lower cost model would make producing possibly more viable making Eve a company that has a few different products to buy from which makes us look better.
I think the idea looks cool, but I think I would be looking to buy things like a dock, mini PC or backpack first. This would just be a toy for me and being disabled, my money needs to go elsewhere first.

I love the idea of having the V as a portable display, with batteries for portable use. However my main requirement would be that it should be possible to power an Orange Pi (specifically the orange pi zero 2 plus) or Raspberry Pi.
Full HD for display resolution would be more then enough, and if the plan is to deliver it with the Eve-V keyboard, then I don’t need touch input. (just to lower the price)

[As a side note: my main application is for using this screen with an external single board computer, in a portable way. And so creating a laptop without any WIFI connection. For security reasons I can only use devices without USB ports and without any radios. The USB ports would need be handled still. I’m now I/P on using the SuperBook for this purpose, but that team kind of gave up and they are definitely not PRO’s as the EVE team. They are hobbyists at best]

Thanks for your recommendations. Since changing the screen on the V itself was a bit of a hassle

I would propose to stick to it for the beginning at least.

I know it is kind of offtopic, but I am curious what you are trying to achive. Why do you want to get rid of radios and usb ports on your laptop for security reasons? I would imagine having the Raspberry PI exposed in another casing, would be insecure too if USB ports are a concern.
In older generations of laptops you would have a Mini PCI-e WiFi card which handles bluetooth and wifi. When you remove it, you would just achive what you are proposing, without the speed reduction of the Raspberry PI in comparison with an Intel processor. Furthermore you would have the whole PC in one shell making it better for on-the-go use.

Yes to all this but HDMI in seems like a noteworthy spec. I use an homemade portable monitor for programming but a friend of mine could use a better one for graphics usage. Even if usb-c is cool for the future but loads of device still use HDMI out.

Even though I would fully support hdmi on the V, I do not know if it would fit physically due to the slimness of the V.
If it is not possible to include it, I would rather see hdmi to usb-c cables as Accessoires than Mini hdmi or a similar sub-standard.

Hi Alexander, Thanks for your response.
You’re right, and thanks for that advice. Buying an older laptop and then removing the wifi/bluetooth card would do it as well. Let me first get my superbook with Orange Pi to work, and if that fails of works insufficient, then let’s see what model of Thinkpad I can find. (any suggestion as to what Thinkpad model in the 12" version still has this removable radio card? Or what compact other brand/model would have this?)