Visible Image Compression with a MacBook Pro 16 and TB4 Cable

Hi.
The tl;dr of the issue is this image:

This is not colour mismatch, but the actual difference when increasing the refresh rate - a greenish hue commonly characterizing compressed images (notice the m).
The setup is a 4k Spectrum running firmware version 106, fed by an M1 Pro 16 incher, with an OWC Thunderbolt 4 cable, both of which have full support for DP Alt Mode 1.4 w/ HBR3 and DSC 1.2 (on paper). The display naturally has USB-C bandwidth priority set to High refresh rate.

I did some searching here and Google researching, but can’t see a reason why I shouldn’t be getting a lossless image at 144Hz.
There are two points worth mentioning:

I’m thinking of trying a few USB-C to (alleged) HDMI 8k@60Hz/4k@120Hz cables, but at the current mess of HDMI 2.1 compliance, I’d love to hear from people having similar issues or from the developers themselves, before spending triple digits on wires…

Very interesting. I’ll give it a try with my own Mac setup. I already spent a bunch on cables trying to figure out other issues. I can hopefully get to it by this weekend and post the results. If there are any pictures or text you want me to take pictures of let me know. Also are you in the RGB, PCI3, or HDR mode.

It almost looks like the signal is dropping into chroma subsampling mode. There’s no obvious reason why subsampling should be needed, given that HBR3 and DSC are available.

I couldn’t easily find any way to check if subsampling is in use on a Mac. The best option appears to be on the page below, which contains a test image that doesn’t show correctly when subsampling is being used.

As part of the search that led me to this page, I’ve seen several mentions on Reddit that Apple’s external monitor handling is awful. One person also mentioned drops to subsampling mode for no obvious reason. Fun.

If its dropping into chroma subsampling, as NZgeek stated, I believe it does that automatically for MacOS to run at 144hz. Without DSC or Chroma subsampling 120hz is the highest due to DP 1.4. Here is a link on where this was discussed further!

There is apparently also a way to check for chroma subsampling in software. They are discussing it in the macrumors forum here: 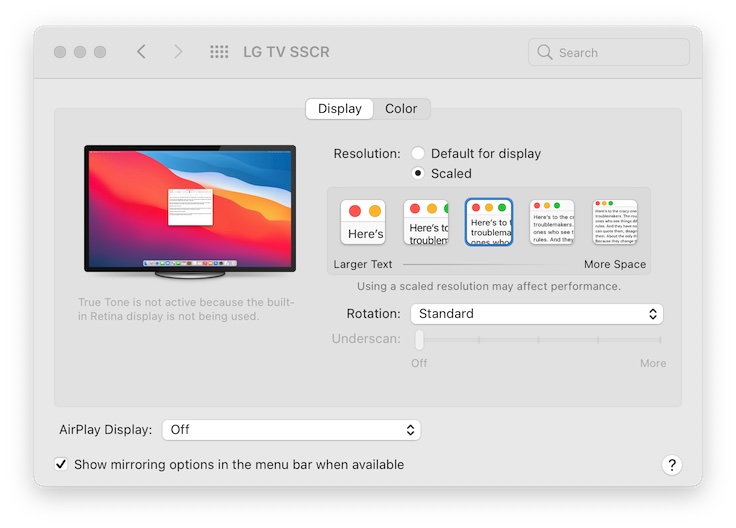 A lot of discussion exists on getting 4K @ 60 or 120Hz with 10-bit HDR and 4:4:4 chroma subsampling (YCbCr444) with an external monitor, but seemingly mostly on the M1 forums. And even then there's little discussion about how to actually get it to...

As for solving it, I tried SwitchResX to enable 4k@120Hz, but custom resolutions apparently aren’t currently supported on Apple Silicon. Is it the Spectrum firmware that sends available options to MacOS, or Apple trimming down the selection?

I assume the remaining immediate options are trying a few cables? I think I’ll buy this one at a local store (for science) and see how it goes.

You could try using BetterDisplay to set a custom resolution

The AGDCDiagnose tool can report whether subsampling is being used. However, I’ve also read that it only works on Intel-based Macs. There’s several mentions that it’s either missing or non-function on Apple Silicon machines.

I’ve noticed some interesting sections when running that command on my work MBP:

If I’m reading things right here, this would indicate why things are messed up over USB-C connections. There’s a mismatch between what the Spectrum says it supports and what it actually supports.

@nkyadav can you get the firmware team to look at this? If they can get both values to get set to HBR3, it’ll hopefully fix a few of the issues seen on USB-C connections.

Thank you for your work on this, it’ll help anyone else out who’s planning for a similar setup

@NZgeek @DeeKay
Have someone tried the 107 firmware?
One of the new feature is: “Added support for display stream compression (DSC) over USB Type-C.”

Firmware v107 is very similar to the PS5.Test5 build that was released a few weeks ago. Both support DSC over USB-C.

It doesn’t help at all on Intel-based Macs. From what I can guess, the graphics driver sees that the maximum supported link speed is HBR2, so it assumes that only DP1.2 is available and ignores the fact that DSC can be used.

For Apple Silicon Macs, it does allow 144Hz to be used. However, because the Spectrum is reporting that it only does HBR2 speeds, the graphics driver decides to use chroma subsampling to reduce the bandwidth needed. Subsampling can reduce image quality and cause visible issues in some situations.

I’ve been working with Eve to get this issue escalated to the company that makes the Spectrum’s scaler chip. Assuming that it is a real issue, hopefully it can be fixed and we can get full 144Hz HDR working.

@DeeKay
Just to be sure: what is the issue that was fixed? Have you witness that the image compression is gone?
What is your laptop model?

The image doesn’t exhibit chroma subsampling anymore at 144Hz. The font is not washed, and the Geeks3D test doesn’t have text bits missing.
The laptop is an M1 Pro MacBook Pro 16", 2021.

Can you update your firmware with Mac OS or Windows only?

At the moment you can not update your firmware with macOS. This is something the team is aware of and is working to creating a solution to this in the future

Would it be worth validating a Linux update path, or is that just way too much time for not enough user benefit?

Ideally we would have multi-platform updater, that way we won’t alienate some users. But the current priority is still macOS updater. Simply because the demand for Linux updater is much lower than macOS counterpart.

Curious to know if you’ve got anywhere with Eve/Dough on this topic? My glossy monitors are due to arrive tomorrow and wondering if there’s anything worth knowing re setup / configuration / firmwares etc to make sure it all goes smoothly. Already ordered a couple different cables to try… but I’ve seen you’re active in the community and wondered if you got anywhere with them on this point specifically.