Hi I’m new here. I’m a huge 2-in-1 PC enthusiast and have been lurking on these forums trying to absorb what I could understand. There are tons of smart folks here, it’s really quite impressive.

One of my passions is enabling folks to use their PC’s ergonomically especially when switching between mobile and desktop environments. One thing that always bothered me was having a laptop on the desk down low and a big monitor up high. I observed many folks straining their necks awkwardly going back and forth between the screens or squandering a beautiful laptop screen by shutting the lid or ignoring it completely.

What do folks think of a solution like this? 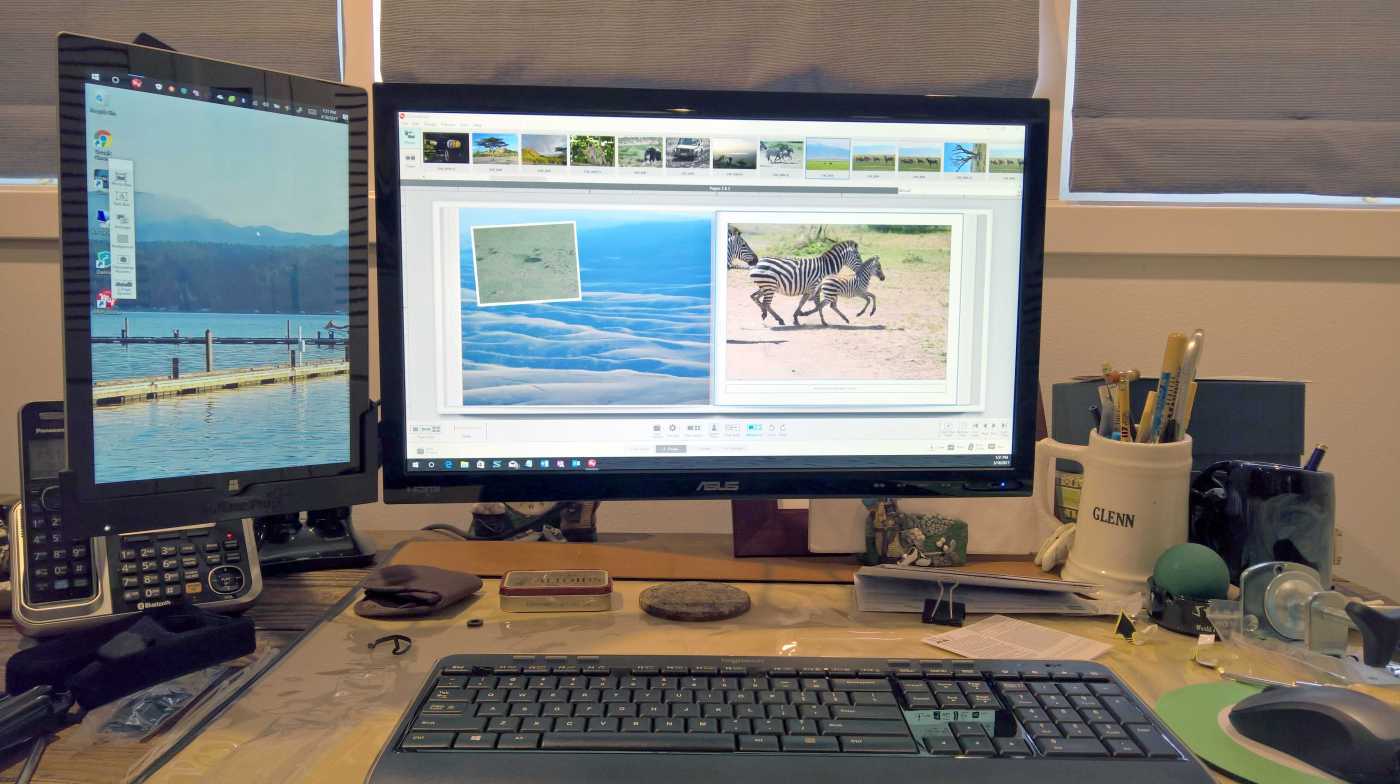 This is one of the workstations I built for a charity auction for an older gentleman who was sick of straining his neck. Now he can just drop in his tablet computer with keyboard folded behind (Surface Pro 3/Pro 4) and it seamlessly connects to his monitor and all peripherals in one simple step. And undocking is just as easy - just lift the tablet and go. No fumbling with cables.

Here is a demo video of an older design I did for a hackathon: https://youtube.com/watch?t=102&v=cXU4iK5-SNU

My design is open-source and checked into GitHub

I was thinking of designing the same for the Eve USB-type-C connection to give folks more flexibility in how they dock. Basically, a high-quality USB-type-C cable would be captured inside the housing I design to enable connectivity to any number of 3rd-party docks with or without eGPU. And the whole housing would have an industry-standard 100x100mm or 75x75mm VESA bolt pattern to mount on standard ergo monitor arms.

Would folks be interested in something like this? All I’m missing to get started on this is CAD drawings of the Eve V chassis and an EVE V test specimen.

I would be potentially interested. I’m not sure if the Eve V will be powerful enough to replace my desktop, but if it is, I’d definitely like something like this. My main computer’s monitor is on a mount like that with 6 degrees of freedom, and it’s really nice. After getting that, I’ve started tinkering with my desk and other accessories to see how much more ergonomic I can set things up.

I’d be super interested depending on price. One more thing, would your dock be able to charge the V as well?

If I understand it correctly, it is pretty much “only” a mechanical stand with an USB-C connector. This way you can use any dock you want - including ones that charge the V.
I would also be super interested as I planed to create one myself and print it on my 3D printer.

Great idea!!! I was looking about a VESA arm solution that allows me to move the V like on a hoverboard over my desktop. (Surface-Studio like). It will be perfect if I can move it from besides my big screen in front of me to draw on it and back. But first i need a VESAmount for the V which is not covering too much of the metal back to maintain the cooling.

In the youtube video, one of the special items that’s highlighted is having the same size on all screens using a SP3.

When I’ve used the SP4 with large screens using the MS dock, I still encounter scaling issues due to the new very high DPI screen on the SP4. I’m guessing your docking mount doesn’t address that issue. Am I correct?

This topic was already open here

I saw that “I have a dream” thread in my keyword search before posting and considered adding to it, but it seems my idea maps to a different scenario so I didn’t want to confuse the two given both have to do with VESA mounting.

That thread appears to be about mounting an egpu dock behind an existing monitor on the vesa bolt pattern much like Intel brix mini PCs I played with to save desktop space. Its a great idea! Please correct me if I’m wrong, but as far as I could tell, it did not address the issue of raising the Eve V screen off the desk and positioning it up high next to the monitor.

But like I said, I’m new here, so if you feel its appropriate to merge the threads please go ahead.

For the mis-matched dpi scaling issue you describe that is still not solved in Win10 Creator’s update, there is a viable workaround I devised for that video. Checking my web logs, the workaround regkey files have been downloaded about 70,000 times so it seems to be working for a lot of folks: https://blogs.msdn.microsoft.com/danchar/2014/11/01/hi-dpi-multi-mon-with-surface-pro-3-dpi-scaling-tweaks

Let me know if this approach works for you.

P.S. Should I file a ticket to have the Eve intel GPU driver accommodate scaled 3:2 aspect ratio resolutions? As far as I can tell, beta folks are just using a stock intel driver rather than one customized for the Eve and additional 3:2 resolutions beyond the native panel res are not enumerated.

I’m intrigued at the idea. I think this could be really useful.

I’m also interested in such a docking mount.
But I would use it to have my V next to the 2 monitors that are connected to my desktop PC.
In this way I can play a game and have Teamspeak and WhatsApp-Web open on the desktop and run something else on the V at the same time having all in sight. 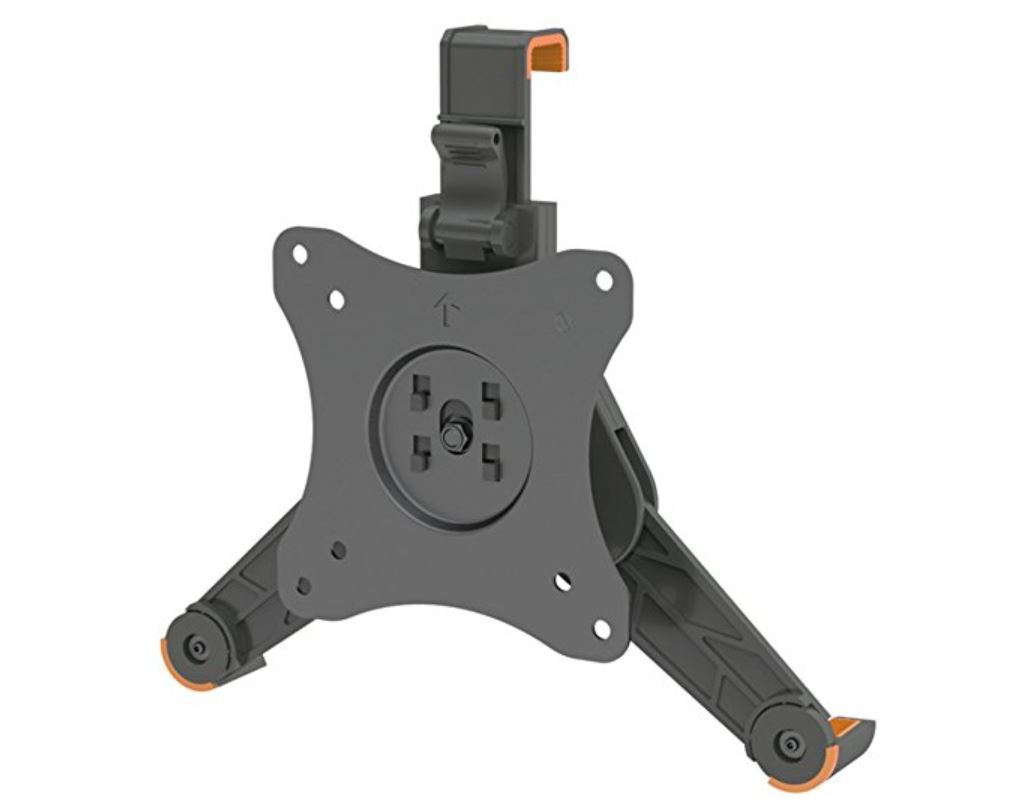 It should be something like that plus a flexible VESA arm. Here you maybe can even dock the keyboard to the V because it is only fixed at the corners. And there’s not too much of the back covered for passive cooling.

The universal tablet clamps on amazon/alibaba are compelling due to their low cost and ubiquity. But in usability testing, I found that these solutions are rather cumbersome. Operating the clamp mechanism requires two hands and is quite difficult for folks with disabilities.

I love simplicity so one of my goals with my approach was single handed docking - just drop it in.

Here us another photo showing my solution connected with a $15 generic vesa arm: 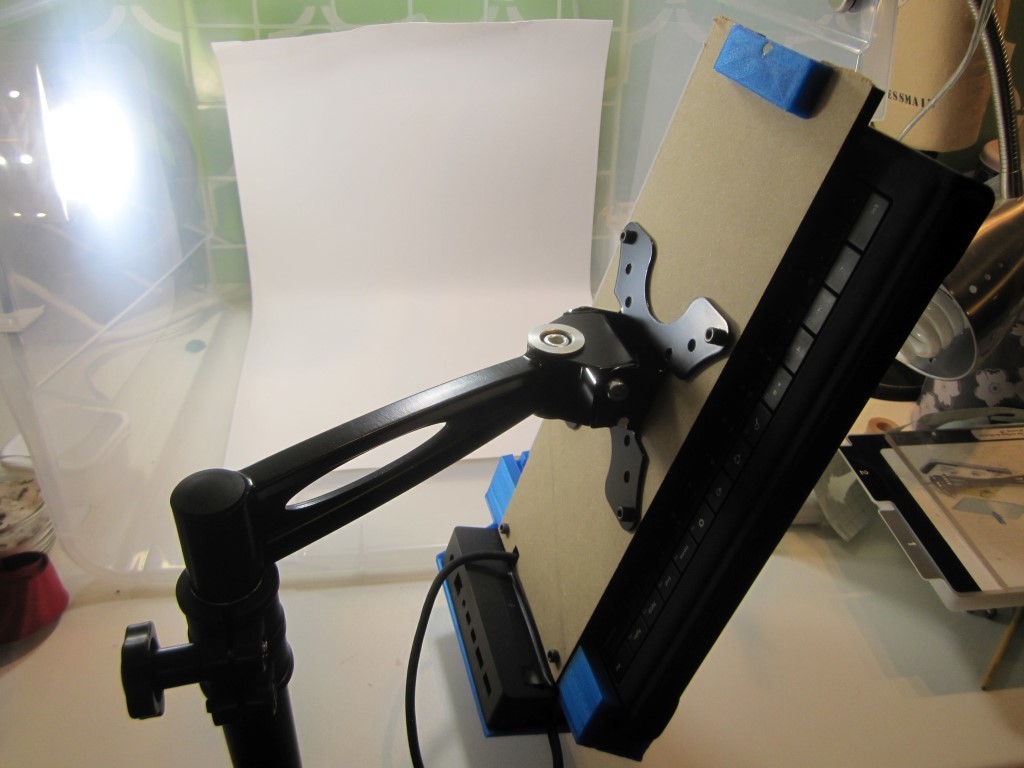 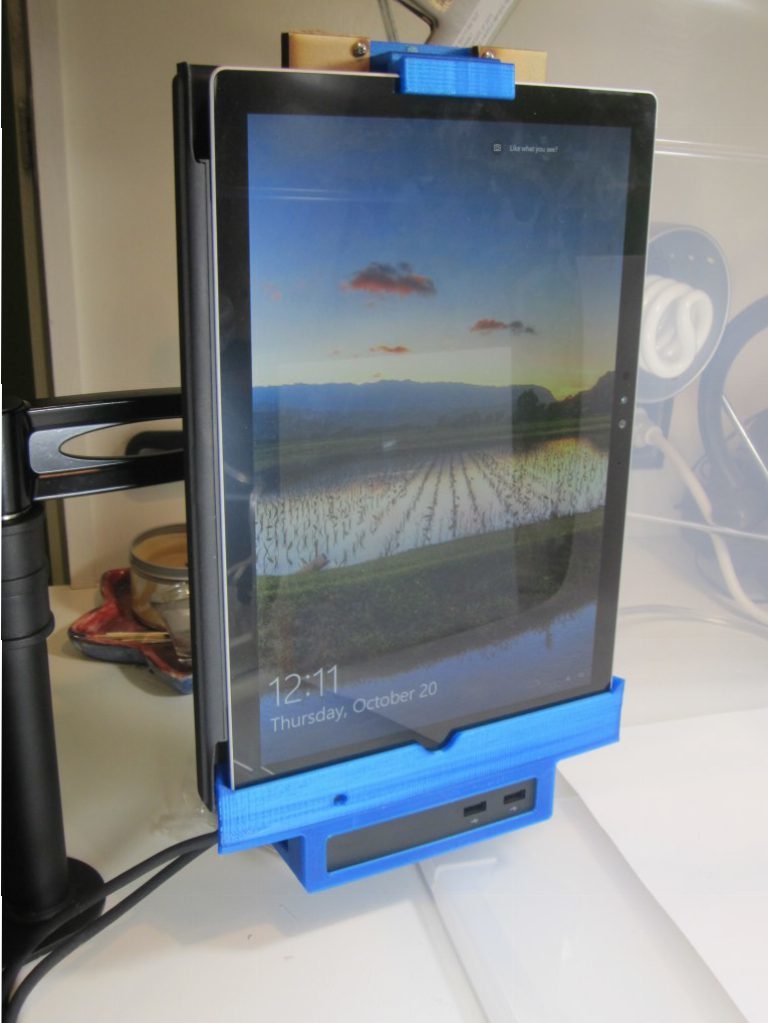 I’ve tested the approach with spring-loaded pneumatic $300 arms from ergotron as well. Ergotron arms are top quality and a great choice for enterprise bulk orders. But for individuals on a budget, the generic arms work quite well.

Cooling is not an issue with this approach even on an SP4 core i7 running DX12 workloads. The same throttling that happens without docking can be observed. I considered integrating a quiet blower into the housing to promote additional airflow, but it just isn’t necessary.

But the passive cooling system of the V needs a free backside.

I would be interested too because I would like to stream a little bit with my 2in1 if possible and it looks like a good set up to do so.

And as a saving place on desk, it is a good idea too. I have a small ikea’s one and I do my homeworks on it. I bet a lot of students would like this idea for their Vs.

But the passive cooling system of the V needs a free backside.

It does? I thought the Eve could be used as a tablet with the keyboard flipped around the back. Does the keyboard need to be disconnected in order to use it as a tablet? If so that is quite detrimental to the whole use case.

Changes my whole opinion of the product.

Well, part of the heat will go to the front, but most of it will be distributed to the back. If you use it normally, then I can’t imagine any case that would heat it up so much that you would need to detach the keyboard. But if you’re really cranking up the TDP and powering it up as much as possible it could generate so much heat that you need a completely open back (to stay at “top speed”)
Think about it this way: It can have a similar amount of power as the SP4 while being passively cooled! The SP4 cranks up the fans pretty much, if you’re putting it under a high load. The V will stay silent