Am i getting the retail prices right?
It’s ofcource okay if you want to go for this premium price and it looks like a awesome product but i thought the purpose of Eve was to make it have a “Unbeatable price” as well.

V: 1120 euro (including shipping) for 128gb, 8gb ram and core m3. so 4gb more ram wich might be useless for some people and a newer architecture of cpu (microsoft will follow at some point with same newest cpu’s at about same price scheme.)

So its not much about the Eve being afforable. Its about 320 euro extra for a new launched company/product with better specs then the surface although not much (may vary from person to person what is much)

With V you also get the keyboard and fanless design and much newer tech.

A few things to keep in mind. Official prices are not yet announce (I assume the price you are stating is the “MSRP” pricing from the IGG campaign?). I can only find US prices easily, so just to compare fairly, I’ll keep using USD. The price for the V was $999 US “MSRP” inculding the keyboard; currently the best price I can find officially from MS is $749 US with $100 off (and weirdly doesn’t include the pen?) 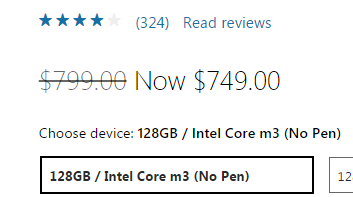 So to compare apples to apples, you would need to add $59 US for the pen, and $159 for the Type cover with the Alcantara. Which brings the surface back to $967 vs $999. If pen was included for the SP4, it would still be $908 vs $999, so it’s not a huge difference, espesciially given the features Eve have included! (edit, I can’t Math apparently; edit 2: price match)

The other thing Eve has been hinting at is that they will be below that “MSRP” price (because that was projected to include the markup of selling through a retailer, rather than direct).

The Surface Pen is bundled with every Surface Pro 4.

The Surface Pen is bundled with every Surface Pro 4.

The current M3 listing is excluding it (that screenshot is from the MS Store page). But probably a fair thing to say is that it will still be included at 3rd party retailers. So that brings it to: $908 for the SP4 vs $999 for the V, where that $999 would probably be more like $875 (as was pointed our by @Caspa). So regardless, I think even if they are just close, it is still a testament to Eve’s pricing, as it can be better spec’d but still be going up against the value of a product nearing End of Life discounting (keep in mind, the SP4 was released at $899 US with no cover, so the “MSRP” of the V is close to what the SP4 was sold at when kitted out).

Also, note that the shipping of the V includes VAT (or other sales taxes depending on country) for many countries. That in itself is a huge savings

I state here my own opinion about the surface situation:

Why is the price now lower?

Why did I choose EVE V?

I travel sometimes and need a portable for programming, Document/Photo/Video editing and the EVE V has a good display with touchscreen. Also the specs are great for such a small tablet. I tried the Surface Pro and wasn’t satisfied with it, the worst part for me was the display and the high price for the good one. Around 2699 $ in Switzerland. I got the same specs for the EVE V i7 1200 $ cheaper than the surface. (In december 2016)

And as a small company you also need a product to start off. You need to plan employees loans, development/manufacturing costs, licenses, prototypes, test runs and test production. For this I think EVE has found a very good middle price.

Where did you get that from? I got my i5 model for 1050eur on Indiegogo…
If you were looking at MSRP, that is not what they’re going to sell it for. That is what they would sell it for if they were Microsoft or Samsung or any other big player. It’s just a reference point

Furthermore, you forgot to add $100-ish for the Surface Pro 4 keyboard. Eve V comes with a keyboard by default, so it’s included in the price.

There is no such thing.

Let me repeat my mantra here: 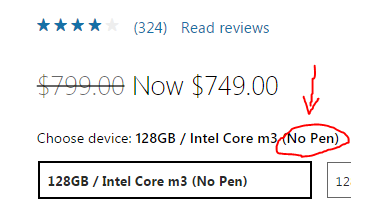 Oh and @andybotty the difference between USD and EUR is only 10%, that’s not enough to cover VAT in most countries…

It’s also funny because I just realized it was being "discounted"an additional $50 on the m3 ($749}, while the pen but being included basically evens out that change, lol. I guess they wanted to let the price of someone wanted a surface as cheaply as office and didn’t care about the cover and pen.

I don’t recommend any Surface Device, the new surface Laptop w/ “Windows S” or the new Samsung Book.
All them are overpriced with garbage specs. just look at specs for Surface Laptop recently released by microsoft it will give you cancer. But you have to buy what you need so its up to you.

Before purchasing a device make sure really know what you want from the device.

the problem is, that i dont need alot of specs or power. I am looking at 300 dollar chinese tablets and they would work for me…EXEPT for their SSD storage. most of them come with 64gb. Taking into account the file system that would drop available storage to ~59gb, then the OS to about 39GB… i need 256gb minimum…

Taking into account the file system that would drop available storage to ~59gb, then the OS to about 39GB…

That is not true. I have a 64GB tablet, and 64-bit Windows 10 leaves me less than 10GB of free space. Sure they write “20GB” on the box, but my desktop’s 100GB partition always has dangeriously low free space. Without any apps installed in it.

I suggest looking for a tablet with microSD card, then buy 128gb microSD card also take into consideration about internal gb storage because on tablet certain apps don’t get install on micrSD card but I’m not too sure about this.

The reason I recommend microSD is for any reason you don’t have internet and you not able to use any cloud storage service an microSD will save you the day. Plus you can always switch device and keep you files available with downloading stuff from online and what not.