I’m the new kid here at Eve having joined just before Christmas. I’m Taalyn (or Shane) here on the community and you will see me here - helping you find answers to your questions and getting you in touch with support or other behind the scenes team members when needed. I’ll also be involved in some other exciting online changes at Eve but that is a story for another topic.

This is my first topic on the community and it relates to a question I have seen posted multiple times both before and after the early access release of Spectrum firmware version 105.

The news on the macOS firmware update tool is not ideal. However we can’t keep saying “an update is coming soon” indefinitely.

We’ve been nudging our development partners to create a macOS firmware update tool since before ES07D03 was mass-produced. However, through these conversations, we learned that they are unwilling to program such an update tool from the ground up due to the amount of work involved compared to the relatively small user base that exclusively uses macOS. Nevertheless, we plan to have an in-depth conversation with them to find out what they need to get this developed because many of you have voiced your needs to us. That said, feature addition and improvement as well as bug fixes have always been the priority and will continue to be in the foreseeable future.

This leaves us with the unfortunate announcement that, while we want to offer a macOS firmware update tool, we cannot give a firm date as to when it will be made available. Currently the time frame is closer to months than weeks. We understand that this will be disappointing particularly to users who do not have easy access to a Windows computer to complete the firmware update process, the team and our development partners have to prioritize the development hours available on the updates that will benefit the most users.

You can read about alternative methods of updating your firmware in the popular Four Methods of Upgrading the Firmware post. Beyond these four methods there is also a process for the installation of an ARM version of Windows 10 onto an M1 Mac - but the process is not as simple as it was using Boot Camp on Intel Macs.

As stated in the Four Methods post there is a risk of rendering your Spectrum unusable. While other users have reported success none of these alternate methods are recommended or supported.

We will keep you updated on the progress of the development of the macOS firmware tool in the future. Our current advice is to rely on using Windows as the primary and recommended firmware update procedure.

@Taalyn any plans to open source the Eve firmware update software so the community could work on the macOS port?

Excellent question @lucastadeu! It is something that has been brought to the team in the past and unfortunately releasing the tool as open source is not an option at this time.

However, open-source firmware is highly unlikely at this time, as the scaler manufacturer is exceptionally unwilling to share their code with even our team.

If this changes we will certainly welcome the opportunity to announce the availability of an open source firmware tool - for macOS or any OS.

we learned that they are unwilling to program such an update tool from the ground up due to the amount of work involved compared to the relatively small user base that exclusively uses macOS.
Nevertheless, we plan to have an in-depth conversation with them to find out what they need to get this developed because many of you have voiced your needs to us.

This is absolutely unacceptable, EVE needs to own this failure, not pass this on as some sort of viability concern from their partner (??) as they have a duty of care to a non-trivial portion of their customers, and they are burning goodwill the longer this goes on.

As a result I’m now sitting on a bricked device that I am unable to update, with what appears to be no visible resolution on the horizon. Extremely disappointing stuff.

Sorry that you are unhappy with current developments.

We are working our best with all our available resources to eventually bring this available to our end customers. Remember, we never said it would be impossible; all we said was that it would take more time.

Now, what happened to your Spectrum? You mentioned a bricked device, but can you please explain more about it?

Thankyou for the prompt reply. I hope the OSX firmware update is not too far in the horizon.

I received my spectrum last week, and have been running into screen blanking issues every ~30s when it is connected via USB-C to my iMac. (display port was running fine, however I will be switching to a laptop next week so need to have a functional powered usb-c port) In an attempt to resolve this I changed the usb-c preference to prefer refresh rate instead of data from the device onscreen menu using the joystick to see if this would resolve the blanking issue, however doing so caused the monitor to no longer display a picture for USB-C or Display Port connections.

This is further compounded by a poor design decision to only make the display menu accessible if a picture is coming through, leaving me unable to revert my change, as the monitor is unable to display a picture from either USB-C or Display port.

I was hoping that the new firmware may have addressed this issue…however, I now have to track down a windows pc to load this, and I’m not sure that I can even access the picture menu to perform the firmware update process.

Hopefully there is a resolution to this, otherwise I will be forced to return my spectrum.

So, from my understanding, you no longer have any devices active at the moment to even allow you to revert the setting on the OSD. But then you used DisplayPort after you changed USB-C preference but it refuses to recognise the connection as well?

There are alternative methods to update your firmware, as has been mentioned above, which is currently the option if you don’t have any Windows devices around.

Luckily i’ve tried my co-workers MBP and it does work with the High Refresh mode under USB-C connection, so I have now been able to revert the setting change, and subsequently restore displayport functionality. I will endure the blanking issue, until I can ship my pc from home into the office to attempt a firmware update this weekend. The other options are not really an option for me at present…

Updated to latest firmware by shipping in my windows box, frustrating that this will be the required process moving forward.

Blanking issue persists. Will move discussion to a relevant thread

Thank you for keeping us in the loop; we are glad that you managed to proceed with the update.

We will keep the community updated once we have confirmed a working MacOS firmware updater in the future.

We have a separate topic for blanking issue. Kindly fill in the polls as well! We are collecting data as we go so we can finally put this issue to rest.

Is it possible to have one of my friends with a PC come to my house and update my monitor’s for me?

That should not be an issue. Spectrum will stay updated after you upgrade the firmware, regardless of whatever computer you end up using.

I heard of some peoples Spectrum’s freezing mid update, is this still an issue with the latest firmware or has it been fixed? The same people also said their monitors were rendered useless during this issue.

Be aware that firmware update is a risky process, so you need to make sure you follow the instructions carefully. Do it at your own risk!

Do power cycles when asked and perform as intended - unplug the device from power, wait 15 seconds, then plug and turn power back on. Based on feedbacks I have gathered so far, you may need to perform this a couple of times. Just make sure you give enough time between cycles.

There might a moment that the monitor may seem “stuck” even after a long wait. Performing a power cycle will help.

I don’t think they realize that they will be losing a lot of potential customers, including me. I was all set to place an order for a Spectrum monitor for use with my M1 Pro MacBook Pro, but found out that there is no macOS firmware updater.
As a result, I won’t even consider buying an Eve Spectrum at all. Not good on their part to alienate a large part of the market.

If the updater utility was something that Eve themselves could create, I think we probably would have seen something come out by now.

Unfortunately, anything to do with the scaler chip used in the Spectrum is controlled by the maker of the chip, Suzhou Lehui. It’s been noted in a thread somewhere that Eve can’t make any modifications to the scaler firmware on their own; everything has to be done by Lehui.

With the Mac firmware updater, I would imagine that the conversation so far has been:

Eve:
Can you please create a Mac-based tool for updating the firmware? We’ve got quite a few customers who don’t have access to Windows.

Lehui:
We’ve got too much other work to do. Making a Mac utility isn’t important to us. We might think about it later.
or
We don’t have anyone familiar with writing software on Macs. We’ve have to hire someone or get a contractor in, and that’s not something we want to do right now.

Whatever reason that Lehui give, the only thing that Eve can do here is keep asking. Lehui ultimately control if/when a Mac updater utility will ever get released.

Maybe Eve shouldn’t have sold a monitor with the promise of a MacOS update tool if they didn’t have control over the creation of it.

They make so many mistakes like this. It’s why their reputation is appallingly bad.

They never promised it. Read again. 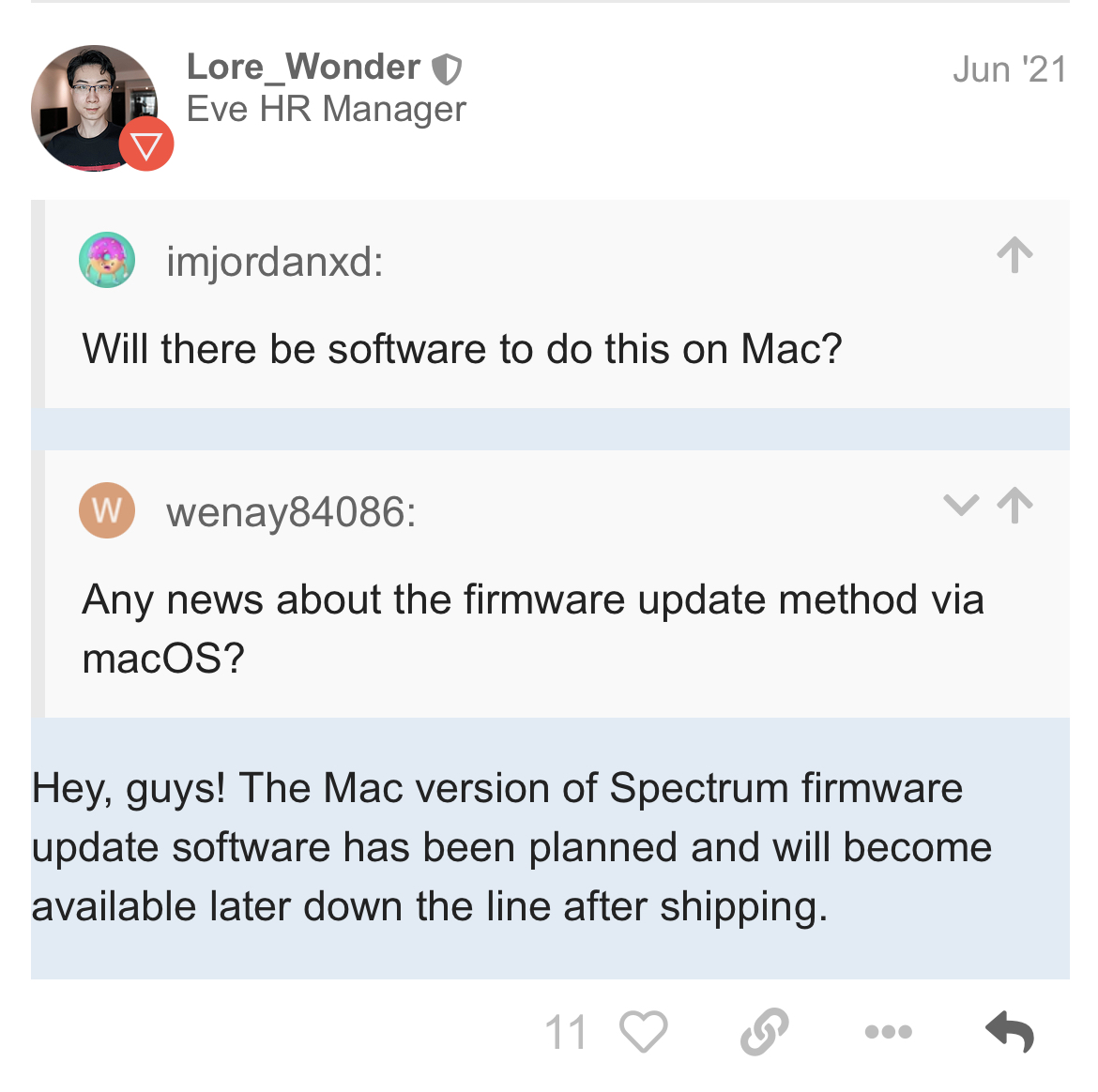