Is Quick Media Switching (QMS) supported on this monitor? If not can we get it added in a future firmware update?

QMS eliminates bonks by using the VRR mechanism to change frame rates, allowing rapid, smooth changes from a nominal 60Hz rate to any media rate below it (down to 24Hz). HDMI 2.1a

I got a confirmation that this feature is not possible to achieve on the current Spectrum lineup.

Thanks for the quick reply. Too bad it isn’t coming. Hope it is looked into for future products.

So wait, you mean to tell me that we can get a quick response regarding QMS, but there still isn’t news about v108? Not to seem impatient here, but it’s very interesting that there hasn’t been any news or updates on it since the New Year started…

I wouldn’t expect anything before CNY tbh

“My Spectrum 4k monitor has started behaving in a way that makes it effectively unusable for me for the purpose that I bought it. Multiple times a day at random the display will go black and stay black until I turn it off and back on again. This issue persists across every version of the firmware. I bought this display for gaming on. When your screen goes black and takes 30 seconds to turn off and on again and then your game switches to a different monitor altogether because you turned your primary monitor off and on, it makes for a rather terrible experience. Especially when it happens multiple times per day.”

Maybe I need a replacement (hence messaging support) but hopefully someone here can help in the meantime. As noted in the message above, my screen randomly goes black and stays that way until power cycling the monitor. Also unable to access the OSD when it does this, but the backlight stays lit and the computer sees the monitor just fine (can blindly move windows off of it.) I’ve had infrequent screen blanking issues since owning the monitor and it wasn’t until updating to 107 that this issue started occurring. I have since tried reverting to 106. Problem persisted. I reverted to 105. Problem persisted. Reinstalled 107. Problem persisted. Managed to get my hands on the 108 beta firmware (currently installed). Problem still persists. At this point, I think my monitor is just broken. Anyone have any advice?

I’m just a customer so I’m guessing, but here are a couple of things you can try:

Please elaborate on what input you are using, what device is driving the monitor and what settings you are currently using

Certified HDMI 2.1 cable, RTX 3090, g-sync is and has always been on (I’ve had the monitor for over a year now) and I do not consider disabling vrr to be a solution. The monitor is advertised to support it and I have had no issues with it until recently (not including the previous infrequent momentary screen blanking)

HDMI has always been somewhat problematic. I remember that there were huge issues getting HDMI 2.1 to work at all, which caused production to slip from Feb 2021 to May 2021. It was some issue caused by the scaler chip.

It’s highly likely that HDMI still has issues, particularly when it comes to things like VRR support.

One thing you could try is switching to DisplayPort instead of HDMI. DP 1.4 has been around a lot longer than HDMI 2.1 and it’s much more stable on the Spectrum. You’ll still get 4k @ 144Hz with HDR, and the compression used by DSC has basically zero impact on picture quality. (In other words, even in a side-by-side comparison with uncompressed HDMI 2.1, you almost certainly wouldn’t notice a difference.)

That’s not to say that DP support is perfect - I still see the occasional quick black screen with some games. But it should hopefully be a lot more stable than HDMI is.

And make sure that your HDMI 2.1 cable is certified to handle 48Gbps. The HDMI 2.1 certification was watered down recently, which has resulted in a bunch of poor quality cables hitting retail that can’t handle 4K@144Hz or VRR, consistently. I use two of these to connect my consoles to my Spectrum. For my PC I use a DP 1.4 cable, as NZgeek suggests. None of them have ever let me down.

make sure that your HDMI 2.1 cable is certified to handle 48Gbps

It is. I bought the ones that I did specifically because they were 48 gbps certified

Try running at 120hz. I think 144hz is the thing that’s causing these issues.

Running higher vertical blank fixed blanking for me. You can try this custom resolution if you don’t mind reinstalling drivers with clean install incase it doesn’t work for you. Also you need to have 10bit enabled when making the resolution. 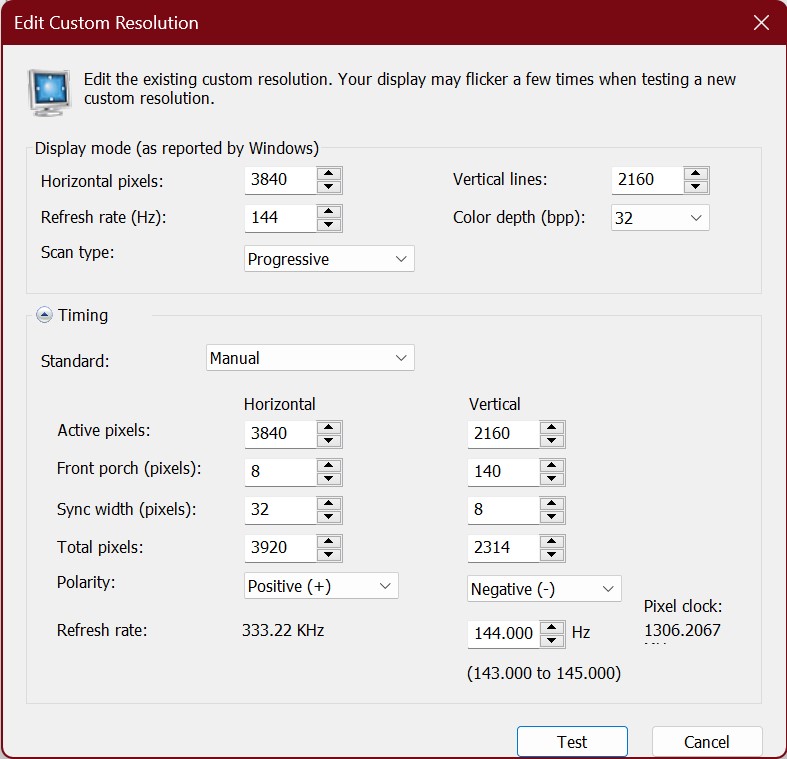 I changed to DP 1.4 and everything is fine now.

Same here. Both my HDMI cables were supplied by Eve/Dough with the monitors.

When will we be able to switch the backlight dimming on/off and change its level in the settings menu, especially when using HDR? It’s always greyed out.