Should my Samsung s7 be louder than my Eve V?

Something that I was partially sold on was the quality of the speakers and as I was told with caution by Eve, that they would be loud. The speakers are really poor. In fact my Galaxy s7 speakers kick the arse out of them.

I also have another issue with playing videos the audio will go out of sync with the video, eventually jumping ahead. I read that this was a common problem and re-installed the Realtek software, but the problem still seems to be there. Anyone else had similar problems?

I don’t have a V myself, but I can potentially offer some insight to the speaker issue.

With audio design, you have the speaker itself, and the acoustic design, or how the sound echoes and resonates inside the device behind the speaker.
Samsung has access to good speakers, and has experienced engineers to design the acoustic cavities to make the most of those speakers in the small device.
The V has speakers which, are on paper, really good. But the acoustic design isn’t as good due to lack of experience, and potentially even the people designing the audio solution not realising the importance of acoustics. And acoustics is a pretty complex thing to get right and do well. Especially in a thin device like a phone or tablet, and is the part of the reason why TV speakers have been getting progressively worse over the years as TVs get thinner.

But as for the sync issue, that’s a really weird and shitty issue that can hopefully be fixed with a future software or driver update… Though it could be a decoding issue, or an issue with your media player. Does this just happen with one program, or all of them? Because if it only happens, with, say, Windows Media Player, you may be able to fix it by switching players to something like VLC, or any other alternative.

That’s quite fascinating regarding in built acoustics and it appears to be something that Eve need to learn and probably not up selling if what they say doesn’t ring true.

Well I watched something on Netflix last night and there were no out of sync issues, which it had done before, but I’ll need to just check on the others. I’ve had notification for a windows update but the last time I did that it broke my Eve and I had to wait months for a replacement. I’m too nervous to do it now as they have seemingly frozen their accounts.

The sound quality of my V through good quality earphones is quite good. In comparison the V speakers are above ‘tin can’ level, but fairly poor.

The V has speakers which, are on paper, really good

Why do you think so?

One of the targets for the design of the V was good audio. 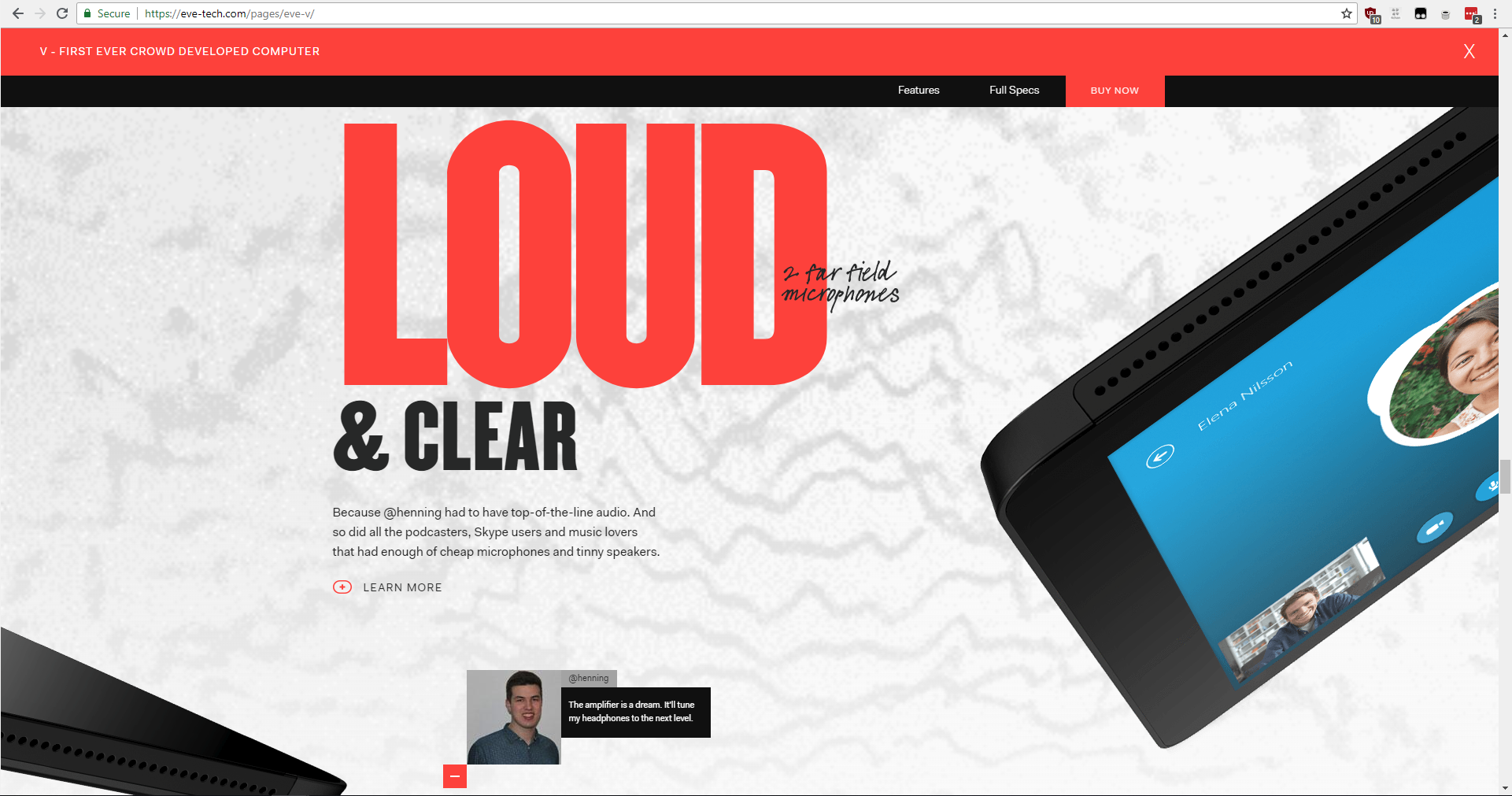 And I remember some talk on the forum early on, when it was realised how bad the audio was, that they were good speakers physically, but the acoustics and orientation weren’t great. There was talk of improving drivers and EQ curves to fix it up, but I don’t think it helped much, and I don’t know how long they spent working on it. I doubt they would have been too focused on audio improvements when they still had 35% of orders unfulfilled after many months…

That sync issue is really strange. It must be a software issue. I know that when using bluetooth audio solutions, the audio needs to be played slightly ahead of the video to compensate for the compression, transmission, and then decompression time delays, to keep it in sync. Maybe there’s some sort of bug which is making it think bluetooth audio is being used.

What I mean is, how do you know they were good speakers physically?

I found the post! I knew I wasn’t crazy

Obviously, they won’t be the best possible speakers on the market comparable to large diameter drivers from studio monitors or anything due to the VERY limited space inside a tablet form factor, but the actual speakers themselves, the physical hardware made from neodymium and copper wire, are [supposed to be] pretty good.
But, resonance chambers and acoustics have a big impact on audio quality, and isn’t as simple as buying good hardware.

Hey, @CJAitken84 , have you seen these at all? I don’t know how much it will improve things, but it may help.

There’s a driver or something for audio in the downloads section of the supports page.
https://eve-tech.com/pages/support/

And an old forum post which I believe is related to it.
https://dough.community/t/eve-v-audio-improvements/13287

I think the speakers on my V sound great. No distortion and the volume is fine. Sometimes it appears that I can’t get enough volume but I think it’s really just how the speakers are oriented. Since they point away from you their sound can get drowned out by other sounds in the room. But anytime that happens it’s a situation where I would switch to headphones no matter what device I was using so I don’t think it’s really a problem.

Thanks. I’ll give that a go some point soon. Thanks for going to the lengths that you have.