Should EVE roadmap include a product with the 8th-generation H-series CPUs?

So Intel just announced an interesting twist to their 8th-generation H-series lineup. That twist is integration of AMD dGPU within the same package with the CPU via an embedded silicon bridge. 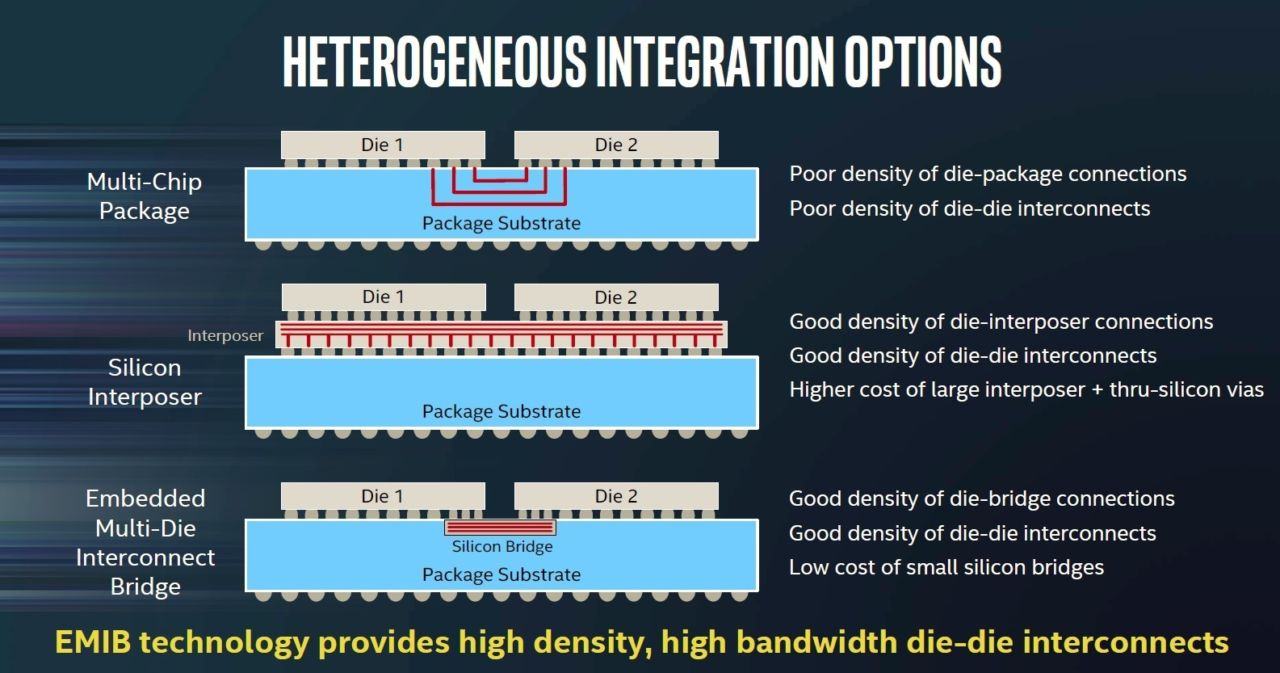 Please note that within the same package doesn’t means that the overall package will stay the same size of the 7th-generation H-series. It will inevitably be significantly larger than CPU alone, however the biggest benefit of this is that the overall packaging of the motherboard could be made smaller. Then there is also a benefit of additional power savings from the integrated power management systems for the chips.

What does this all give us you might ask? Historically mobile devices with higher power CPUs such as H-series are not very portable, but with a dramatic improvement in packaging we might just have stepped over the barrier where mobile workstations could reach new heights of portability.

Since EVE is on the mission of crafting exceptional and market shaping devices, do you think that EVE should include a product with the 8th-generation H-series CPUs on it’s roadmap? And if you do, what do envision this device would be?

Please share your thoughts in the comments. If there is enough interest in this thread I will keep an active summary of suggested specs and other characteristics.

It is hard to know without knowing the details of this new H CPU. The biggest affecting factor would be the TDP and general thermals of the whole thing alone.

I would personally love a very slick ultrabook with smartly designed and robust cooling solution that can cool this properly and not throttle.

But to establish if that is even feasible at all we would need to know what thermals are we looking at here.

If Eve is going to make an ultrabook, it has to be one that is truely without compromise. All the other ultrabooks on the market are making some kind of concessions, be it camera placement or battery or screen technology.

it’s time to put the ULTRA back into the ultrabook

Its one of the most “holy shit” moment in the PC hardware world. Intel collaborating with AMD? Say what?

Anyway, for Eve, I would say it depends on the integrated GPU. If its something like GTX 1060 / RX 580-level of performance or better, then it would be a great option. Otherwise, we would need to add a dGPU anyway, and the priority of the iGPU would then shift from performance to power consumption, as the dGPU will handle the heavy load anyway.

While I would love to see the something this powerful in Dell XPS13 chassis size, my guess the minimum chassis required for this build would be something of the Razer Blade 14

Triple digit heat output is monstrous. The width of anything in 13-14 inch size has to be big to provide some way of dispersing this. I think I will rather have my V than whatever is attempting to be cooling something like this, and settle for older games. Luckily my requirements are mostly RAM and SSD and a bit of sprinkling in CPU department (hopefully V will be OK here, it really should - I know core i7U 4th gen is OK here), GPU is just for fun.

Hoe lee sheet… That’s some crazy TDP
btw I don’t need a 13" screen, I just want a machine that’s as densely packed as cooling allows, and if we can do it at 13", that would be some innovative sheet.

Plus, if we go for a uniform thickness design instead of tapering everywhere, I expect the chassis to have much move volume, no?

It would actually be quite a remarkably low total TDP for the systems in this class and cooling should be doable. It would be really awesome to fit it all in 13" chassis. Or maybe 14" chassis but with massive battery?

Btw does anyone know if airlines have 100Wh limit for single battery or for cumulative power available inside laptop?

If we want thin-and-light PCs with decent graphics grunt, we’d be better off looking at Raven Ridge.

This kind of thing isn’t even feasible on a Surface Book-type device.

Raven Ridge APUs are reported to be delayed in 2018 so that puts things at a bit uncertain, but do think that Raven Ridge APUs would be able to come close in computing and graphics power to H series CPUs with something comparable to gtx 1060 for graphics?

This sounds interesting indeed. Although, how would you propose putting the camera on TOP if there is no bezels there?

Btw does anyone know if airlines have 100Wh limit for single battery or for cumulative power available inside laptop?

Based on my recent travels, they do.

I think HP does it with their ultrabooks. Plus, camera modules are tiny, considering the breadth of the screen panel, it shouldn’t be too hard to pack a camera at the top with as minimal bezels as possible while integrating the circuitry to the sides of the camera.

I think HP does it with their ultrabooks. Plus, camera modules are tiny, considering the breadth of the screen panel, it shouldn’t be too hard to pack a camera at the top with as minimal bezels as possible while integrating the circuitry to the sides of the camera.

Yeah sure it works if the condition is bezels as small as possible, I just misunderstood you meant that they have to be exactly as with Dell’s “infinity edge”

No, obviously not.
But we’re talking about something that sits in a 12-25w thermal envelope vs something that could push near 100w at full load.
That’s a significant difference in what you can build with each respective part, and that’s before you factor in cost.

We are all on the same page here, right? IF Eve were to build one of these, it would have to be a bulky “mobile workstation”/“gaming laptop” style device.

This I can agree with; was about to ask why not use Raven Ridge, in the future? Would at least have more cores, right?

It might not be “gamer” levels of powerful, but if I can play some old titles from 2010, even at low settings, that’s good enough for me.

It would be sensible to decide on a product first, then what technology it needs second.

There is a limit of 100wh but the question is if it’s the limit for one battery OR for one device. Like would a laptop rocking 2 batteries with 100wh each be accepted by airlines?

Sounds nice, but why not use an Nvidia GPU there? I’m pretty sure a 1050 or even 1030 would still be much better than AMD integrated graphics.