Screen blanking after firmware 104 while gaming?

Is anyone else experiencing the screen randomly going blank for a second or two while gaming since the latest firmware?

Normal desktop use has been perfectly stable and only happens in games (multiple games, variable frames as well as locked solid 60). This issue never existed prior to the firmware update.

Firmware update completed successfully plus I did a full restore to factory defaults in the OSD after to ensure a fresh start. Even did a full reinstall of latest Nvidia drivers (3080FE + Windows 10 + certified hdmi 2.1 cable).

10 Likes
Will rolling back to 102 help or shall I switch back to my old monitor?
Screen Goes blank a for a couple seconds while playing Nintendo Switch
LoneWolf September 28, 2021, 5:20pm #2

i am not having any of those issues during gaming nor desktop. You should try and see if your gpu manufacture example evga has a firmware update on their site.

It’s an NV branded 3080FE. Fully updated firmware wise (only update pushed out so far has been for resizable bar support) and latest drivers 472.12.

No issues existed for me on the previous firmware. I rolled back today to 102 and everything has returned to working perfectly. No blanking experienced. On 104 the only way to guarantee no blanking was to disable VRR in the OSD and disable G-sync in the NV control panel.

I have adaptive sync off and vrr off. I have gsync on. Butter smooth. No black screen issue. Hdmi certified 2.1.

You mean the VRR (sorry meant adaptive sync, these are interchangeable terms) setting in the OSD? Why do you have that disabled if you are using g-sync?

Have you tried a display cable with firmware 104?

G-sync compatible is Adaptive sync (and Freesync).
As per the D03 manual: https://imgur.com/a/bQ5jiCb

G-sync with the hardware module inside a G-sync monitor (not the D03) is the original tech. We are not using that with the D03. I upgraded from an actual G-sync monitor to the D03.

i have it off and G-sync still functions by enabling it in Nvidia control panel. My games are maintaining 120fps. no flickering, no screen tearing. 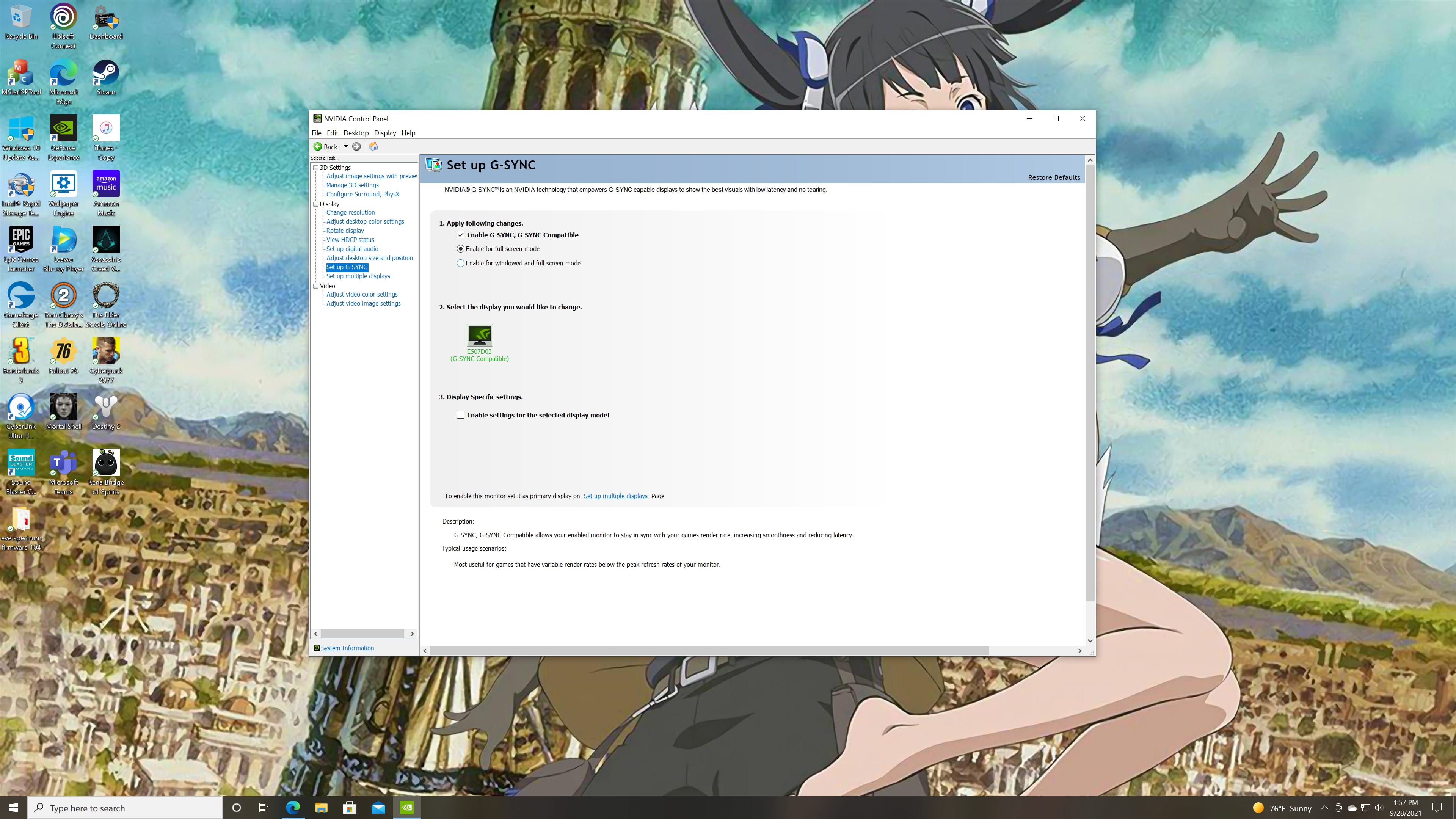 I agree G-sync compatible seems to remain functional with the OSD setting off. I just tested with the G-sync pendulum demo Download NVIDIA Tech Demos and the OSD setting doesn’t stop it from working.

But this doesn’t make sense to me functionally. It also explains why sometimes when I enable Backlight strobing (adaptive sync off in OSD but G-sync compatible on in the NV panel) and experience rapid flickering of the backlight. The two techs as currently enabled on the firmware (we don’t yet have VRR+strobing) can not coexist.

This makes me wonder if the Adaptive sync setting in the OSD is not functioning correctly?

i had adaptive sync on via OSD and G-sync enabled via Nvidia control panel which the issue I had before was my frame rates wasn’t matching my display refresh rate. while gaming my frame rates would drop. With Nvidia recent update it listed spectrum in the driver notes since then I’m maintaining 120fps while gaming with no screen tearing or black screen flickering.

I’m going to reinstall 104 later and test again with the OSD set to off. I am pretty sure I tried that already but it’s easy enough to test again. I’ll also toss in a test with DP cable and see if the blanking returns.

Either way something is off with the way the OSD Adaptive-sync setting applies. Adaptive/gync shouldn’t function with that set to off. I can now easily recreate the flickering issue with Adaptive OSD off + backlight strobing on + G-sync compatible on + pendulum demo (it rapidly varies the frame rates). I mentioned this issue a few weeks ago to the BlurBusters person and they just assumed I stumbled into an unintentional feature not yet enabled (Adaptive + strobing). But now it seems it’s actually a conflict of two features on at the same time.

i have backlight strobing off. adaptive sync off. g-sync on, response time overdrive set to 23 user defined. im using a certified hdmi 2.1. gpu asus rtx 3070 ko oc. yeah try different cables with the 104 firmware and change hdmi ports as well to see if anything works. also in windows graphics settings i have gpu accelerated gpu scheduling turned on. to help with performance.

One more question Lonewolf - in your NV CP screenshot above, you don’t have the #3 checkbox enabled. That means g-sync isn’t actually enabled for your active display (that setting exists so you can turn on/off g-sync per display in a multi-monitor configuration). Is that how you are currently using the D03?

You can verify if g-sync is enabled by turning on the g-sync compatible indicator in the NV panel.

In the nvidia control panel g-sync section. section 1. i have the first box checked. section 2. i made sure the spectrum is my display of choice. the third section 3. i left it unboxed. then i click on Apply. G-sync is enabled. step 3 is SPECIFIC SETTINGs. g-sync is still enabled without it.

Test with the pendulum demo, you won’t even be able to enable gsync in the test. The onscreen g-sync indicator will also not show up. You should see very noticeable tearing as the frame rates vary.

Your guide basically stops before that checkbox.

Nvidia says you need to enable it:
https://www.nvidia.com/content/Control-Panel-Help/vLatest/en-us/mergedProjects/nvdsp/To_use_variable_refresh_rates.htm

Please test with the OSD indicator. Do you see a green “g-sync” indicator show up when in any full screen 3d app? The pendulum demo is a very easy test because you also will not be able to click the g-sync radio button within the app (nor will the g-sync indicator display on the top right).

i have the first 2 boxes enabled in section 1. section 2 i have spectrum set as my display monitor.

UFO Test: G-SYNC Demo of Variable Refresh Rates (testufo.com) this test i’m 120fps and 120hz.
step 3 in control panel you click enable when a display is not g-sync validated. the recent nvidia driver update did validate the spectrum as g-sync compatible. no longer need that to be checked.

I’m pretty sure that UFO test is only a simulation as described in the 101 section (using motion interpolation to simulate how gsync looks): G-SYNC 101 | Blur Busters

I can fully disable g-sync in the NV panel and that web page looks exactly the same in its ability to simulate stutter free movements above ~40fps.

This is why I am suggesting you try the pendulum demo or at least enable the overlay to see if you see g-sync in any game. The pendulum test is very simple and you can define the frame rate range you want to test (D03 supports 40-144hz) and see if g-sync is functional.

I’ve been getting occasional screen blackouts since 104 as well, connecting through HDMI 1 with a certified HDMI 2.1 cable from an RTX 3090. I didn’t get this prior to 104.