Eve V - If OnePlus Made A Laptop - YouTube
Hey, I have been seriously stalking the V on YouTube especially and I came across a lack of presentation of some features.

Firstly, approximately 60% of the reviews do not specify the wireless keyboard. This is pretty wired why they choosen not to.

Secondly, not so seldom but the fingerprint sensor was also forgotten in some reviews. This is also a major feature that should br mentioned.

Moreover, the V pen missed the landscape sometimes and the fact that the pen and keyboard are included in the price.

I would say that these features can make the difference between a future V user and a Surface user.

and I came across a lack of presentation of some features

Has Dave2D done the same? I would check it myself, but I don’t want to spoil me the unboxing.

I also want to add that compatibility with the Microsoft Surface Pen is very often missed. Usually reviewers that do this also add that the V isn’t good for artists because the included pen isn’t great.

He did a clean review (as always) including all the features and I loved his review despite the fact that he seemd a bit doubtful as he reviewed a prototype product at that time. Therefore he couldn’t make benchmarks for gaming ,and some more specific parts( themal throttling) and it woud be really great if he could rereveiw

You deserve thanks for noticing and pointing that out.

That’s a very good and important point you have raised and made for Eve to be aware of in their marketing.
The reviewers don’t choose to miss these items, they forget or don’t understand the important difference about them.
BTW I also modified your heading a little more to have some extra impact and clarity.

It appears obvious to me that these “Unique Points of Difference” you raised are most likely not being made very clear and articulated strongly enough in the introductory paperwork or blurb being sent to reviewers.

I’m sure many of us here would love to see Eve become very successful as it assures us all in the long run of more good things to come.

I think the battery blurb on the web page should read:-

Another feature that got me was the 10 Point Touch screen. I have such a screen on my laptop for the last four years and rarely use it. But it’s handy when I need it. Great for artists and photographers I guess.

I’ll try to make a list of features here, I’m not sure how to format text in the forum.

If it’s not done already and I doubt it is then I think the letter to reviewers and the list presented to new customers should be formatted something like the list below to better highlight some of the more distinguishing features and benefits of the V. 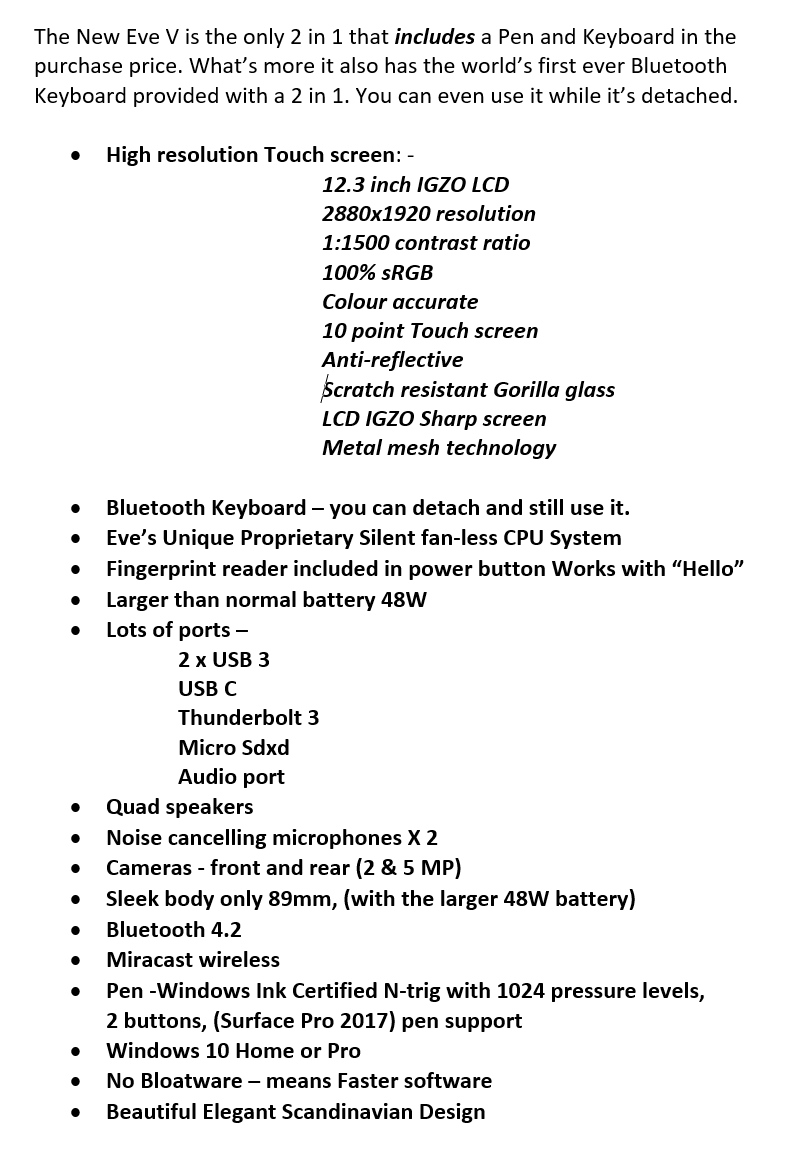 I think we should stop highlighting the quad-speakers. It leaves us open to criticism, as they are at the low end of the spectrum as quad-speaker setups go.

Otherwise, the keyboard/pen and fanless are definitely features to mention.

I am merely pointing out actual features.
I say nothing about performance, nor do I infer that it is superior or better.

BTW someone recently said on here that the sound is now considerably better now with the s/ware changes than the original V’s. And I’m pretty sure they said it now was as good as a Surface.

That’s your personal perception. You know the history and a new customer will read it differently to us.

It has a 48W battery but I don’t say it gives more running time as well.

I forgot to mention the fanless CPU, you’re right. What’s really distributing is that these two examples are the most viewed ones relating the v. This means a bit of a misleading for the at least 2.5 M People who’ve watched it now. Their conclusion it’s a bit disappointed for me as they’re saying that the V almost acts as a Microsoft surface. Yet this mircale has way more features which the Microsoft surface won’t have yet…

I hold to my statement, that as quad-speaker setups go, it is at the low end of the spectrum. If we claim they have quality speakers, I’d go for that. The Surface Pro has great speakers. With the quad-speaker claim we’re leaving ourselves open to criticism because they simply aren’t that good to the active user compared to other quad-speaker setups, and they may just match a good dual-speaker setup. It makes us look like we’re reaching, and spouting marketing fluff that has no real-world application.

It is bad for Eve’s image.

I’m still waiting for my first experience with a V, but I’d like to think this is fairly accurate based on all community feedback.

Fair call, I can agree with your view about the perception given by using the word “Quad”.
I was including it as another point of difference that’s all.

However I reserve my final judgement when my V arrives as well.

I never used the “Quad” speaker bit as part of my decision to buy.
I would always use a headset if sound quality is an important part of my listening experience regardless of the environment I’m in.

My intention was to assist Eve to create a stronger and hopefully a preeminent position in the market place.

So, how do we solve these issues as media consumption will get bigger and these reviews will be more absorbed!