I want to request that Eve develop a new, simple non-Bluetooth version of the V Keyboard. I have had issues with mine and would pay for a new one that won’t break because the magnets are too strong. I’d forgo Bluetooth because then it wouldn’t have a battery and would be lighter. I don’t like to annoy the team but @Team.

Suggestions for an updated design:

If people are interested, can this be done? Perhaps team can make a V update accessories kit, with V cleaning cloth, bottle of anti reflective coating, etc.

Can you add some sort of “other” option? I like the my keyboard but would like to see a redesidng. I want BT to work better and have a few other improvements as well. For what its worth though I don’t see a new keyboard being high on the priority list right now.

In my experience the only flaw of the V is the Keyboard. I had to wait a long time for a replacement and the new one isn’t perfect either.
I’d like to see a keyboard like the one from the surface, without BT (nice gimmick but is just not worth the hassle and extra weight since it needs a battery). But with the layout and appearence of the V Keyboard.

The only thing I need really

I voted “OTHER”
I want the opposite : a ONLY BT keyboard

without pogo pins and all that nonsense, without the whole part above with the
pogo pins (so it is shorter) BUT
with a port to charge it and with a control light to see how much it is charged

I was thinking about a small adapter to get the SurfacePro Keyboard working at the V. Someone has to align the magnets and the pins inside a small plastic strip and you can use a SP keyboard with the V … but it’s more likely, that we have to wait for a V redesign next year or in 2021. I’m sure there’s absolutely no manpower at eve for side projects beneath spectrum and muse…

As someone who has to use a BT keyboard for the past three months while waiting for the replacement, I’d say that the keyboard also acts to protect the screen during storage and transport. Regardless of BT-only or BT-less, the protective function cannot be overstated.

Hello,
I am also waiting for a replacement of a v keyboard not working any more.

I am now using a foldable Bluetooth keyboard which includes a stand for a tablet as well.

Even by really liked to work with the eve team before as a beta tester I am really concerned about their service. They dont have spare parts and so a lot of customers like me are not convinced to go for a new eve product by knowing that afterwards if there is anything wrong you are lost…

I’ve had good luck with my keyboard and overall I like it. I’m not sure that I’d really be interested in anything other than an improvement on the original design because it would be best if Eve could use as much of the old design as possible. I’m fine with the weight and basic layout. Sure, it would be nice to have other keys but that seems like opening a can of worms.

The things I really want-
Better BT function- Solid connection and the ability to change things like scrolling orientation. I want to have BT for 2 reasons. 1)Convenience of a more flexible workspace. 2)Backup in case the pogo pin connection fails.
Smoother/more responsive touchpad. It’s not terrible but it could be better.
Indicators for CAPS, Scroll Lock Num Lock, etc.
More robust internal cabling. I haven’t had any issues yet but it’s obvious that its a problem for quite a few V owners.

Things that would be nice but that I can live without beacuse they mean case changes-
Larger trackpad.
The keys that some people wish it had…right Ctl, etc.
A non-Alcantara option.

I haven’t had any issues yet

Interesting, I think we all can learn something on how you handle your kb

What I really want is a new keyboard that I know I can rely on for a long time that directly connects to my V. In the end, Bluetooth and battery aren’t issues with me, but preferences.

I probably just don’t use my V as much. I’ve only had one or two “violent” disconnects from the V falling or getting pulled away from the keyboard. I quit using it in BT mode after 2 or 3 times due to poor function and I don’t use the V in tablet mode alot so I’ve had a minimal amount of connects/disconnects. My V is always carried in a sleeve.

I haD (emphasis on past tense) many issues with the keyboard. Often, the CTRL key would hang (hovering over the screen with the pen would show a tiny “ctrl” around the pen-cursor… - banging, sorry, clicking the ctrl-key once, twice… would fix it),
after disconnecting and switching (ctrl and BT key) to BT, often the track pad would respond but NOT the keys (no typing)… etc etc.
I sent a letter to support. They told me to make videos of the issue…
I never had my camera ready when Keyboard acted up.
So…
I’ve had enough, I put the keyboard away and used my old only-BT keyboard (which I had bought for the SP4) for a while.
After another few weeks (months?) I decided to take the V-keyboard for another try.
Had this ctrl hanging ONCE since several weeks. No other problems I mentioned above. Nothing. Strange. Curious.

Did the keyboard and the V needed to learn to know each other better like in a new relationship?

Who knows…
Now I’m happy with the V&Keyboard…

ps: (Sent another letter to support telling this above story…)

Another suggestion for the keyboard version 2:
page up / page down button in the empty space (!!) above the left and right arrow… I do not know why - even though there is room - page up/down are not there…

A lot of people actually prefer arrow keys to have gap so that they don’t accidentally click on other buttons
But I would like their inclusion, perhaps somewhere else

Hi first post here,
after getting a super fast replacement of my first keyboard, which had Bluetooth issues, the second keyboard has been working flawlessly since. I ordered a standard Qwerty international english keyboard, thinking it would be easier to replace, which was a good move.
I need a Qwertz german keyboard on a daily basis and french keyboard would be sweet as well.
Unfortunately at the time being, one cannot purchase a keyboard without purchasing a V.
Keeping the actual design would not involve any creative resources from the team.
A new design (something sturdier, maybe with BT5, without pogo-pins to expand potential customer base) would be welcome.
Most important make the keyboard available to purchase on the shop.

If EVE needs cash for the keyboard production, especially other language layouts, set a minimum production quantity and let customers make a prepayment.
Just my 2 cents.

I am writing in German a lot, in French sometimes, too… so… I don’t know how you manage to type in either language, but here’s what I do:
I downloaded the other languages in Windows keyboard settings AND I have this picture on my desktop if I need to know where what is

…
Especially the punctuation signs and other little things… 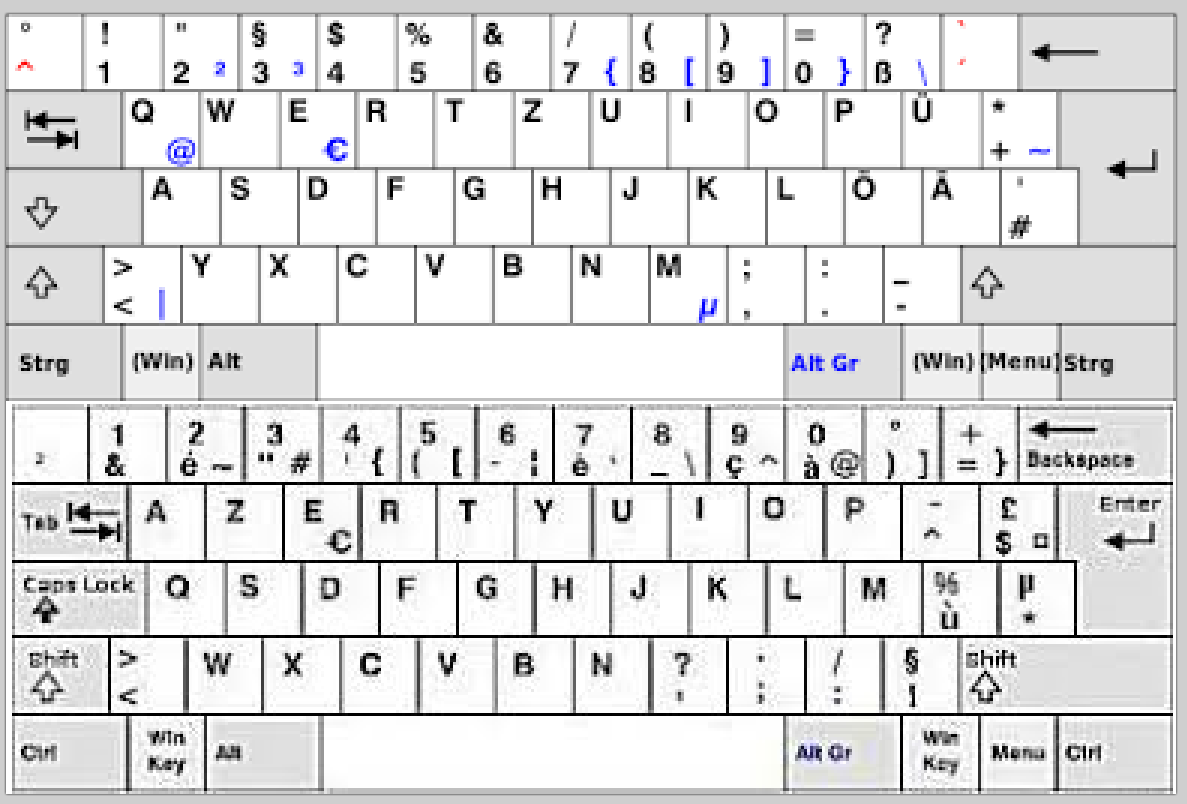 Iirc the UK English layout (instead of US English) is very similar to those French and German layout, so that could be an option