Project: V | Through The Darkness

Our team in China celebrated the National Day Holiday during the first week of October. Typically, now it is when our partners here should pick up their progress in the production phase of V (2021). But, unfortunately, the resource capacity of our packaging supplier has been considerably reduced due to the ongoing local regulation in power consumption. As a result, our time buffer in place for Project: V has elapsed. So this is when we need to adjust our timeline accordingly and reach out to you with the latest status.

Although electricity supply to private residences is untouched by the regulation, affected factories continue to comply with the rule by reducing the number of workdays to 3 or 4 per week. Oftentimes, they have to work and have lunch in the dark, as illustrated by one of our co-workers: 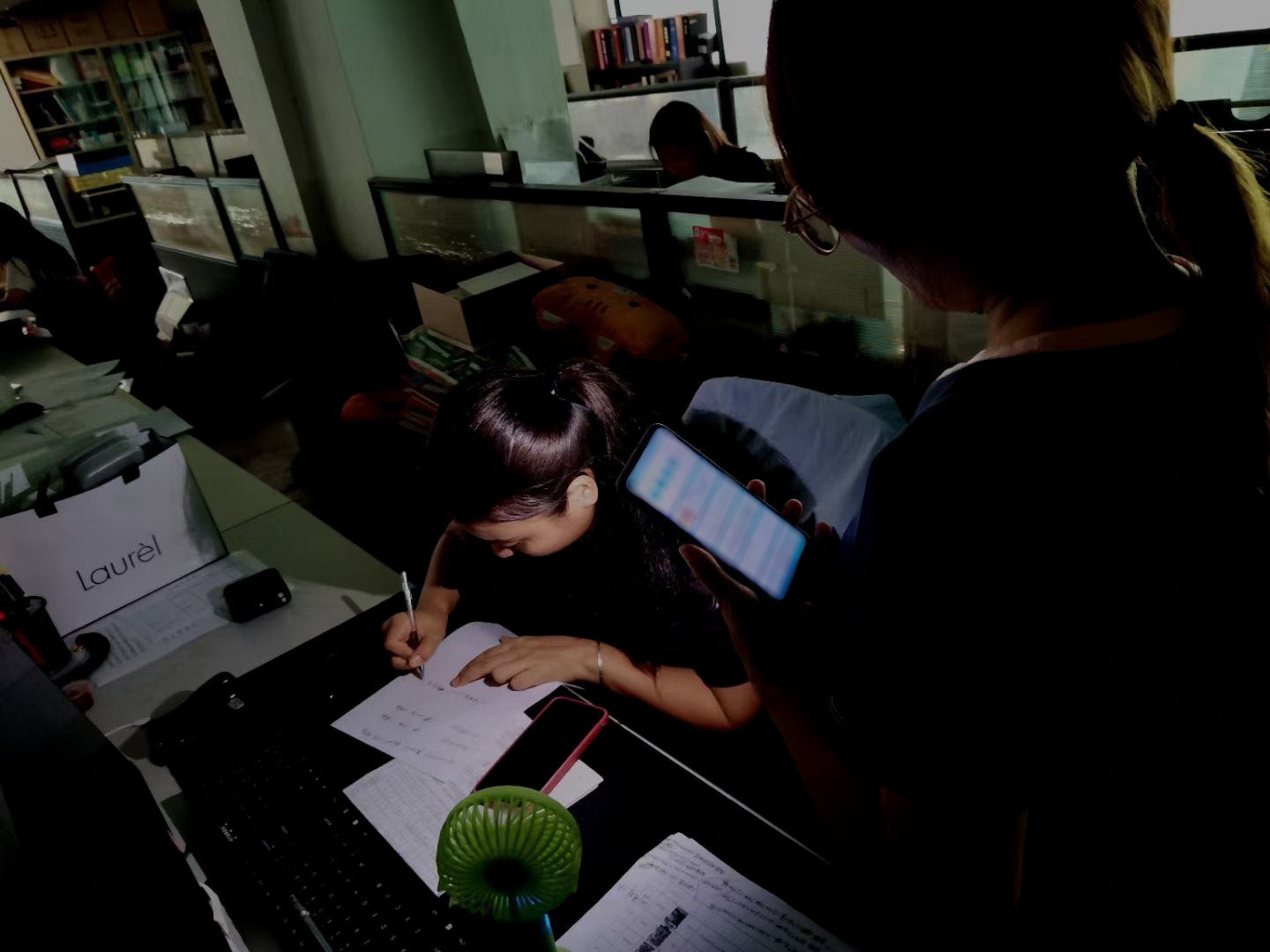 Snapshot by our packaging supplier.

In addition, we learned that the income of operators and factories took a direct hit due to the reduced resource capacity.

Taking into account the continual situation, V is currently estimated to start shipping at the end of November 2021. We are unhappy to bring this unfortunate news, and apologize for the added wait time before shipping commences. As always, we will continue to monitor the situation and keep you updated.

How difficult would it have been to give a simple reply to my message and to those message of several other early backers who have asked over and over about the timeline? Even if you were to say, ‘there could be delays but we are monitoring the situation and will come back to you officially with a revised delivery timeline’.

There is no way that you couldn’t see an entire month of delay coming at the very least, 3 weeks ago.

We are all perfectly aware of the challenges in China and this is why many have asked before if the semiconductor shortages or the blackouts are likely to affect the shipping schedule.

Nonetheless, direct and more responsive communication with your community members, especially those who have been here for years would have been the difference between my order being the first of many from my company and the cancellation of my order being added to my list of things to do.

And, of course, Eve continues to state that the V ships in “October 2021” on its order page, when it’s now going to be December at the earliest. 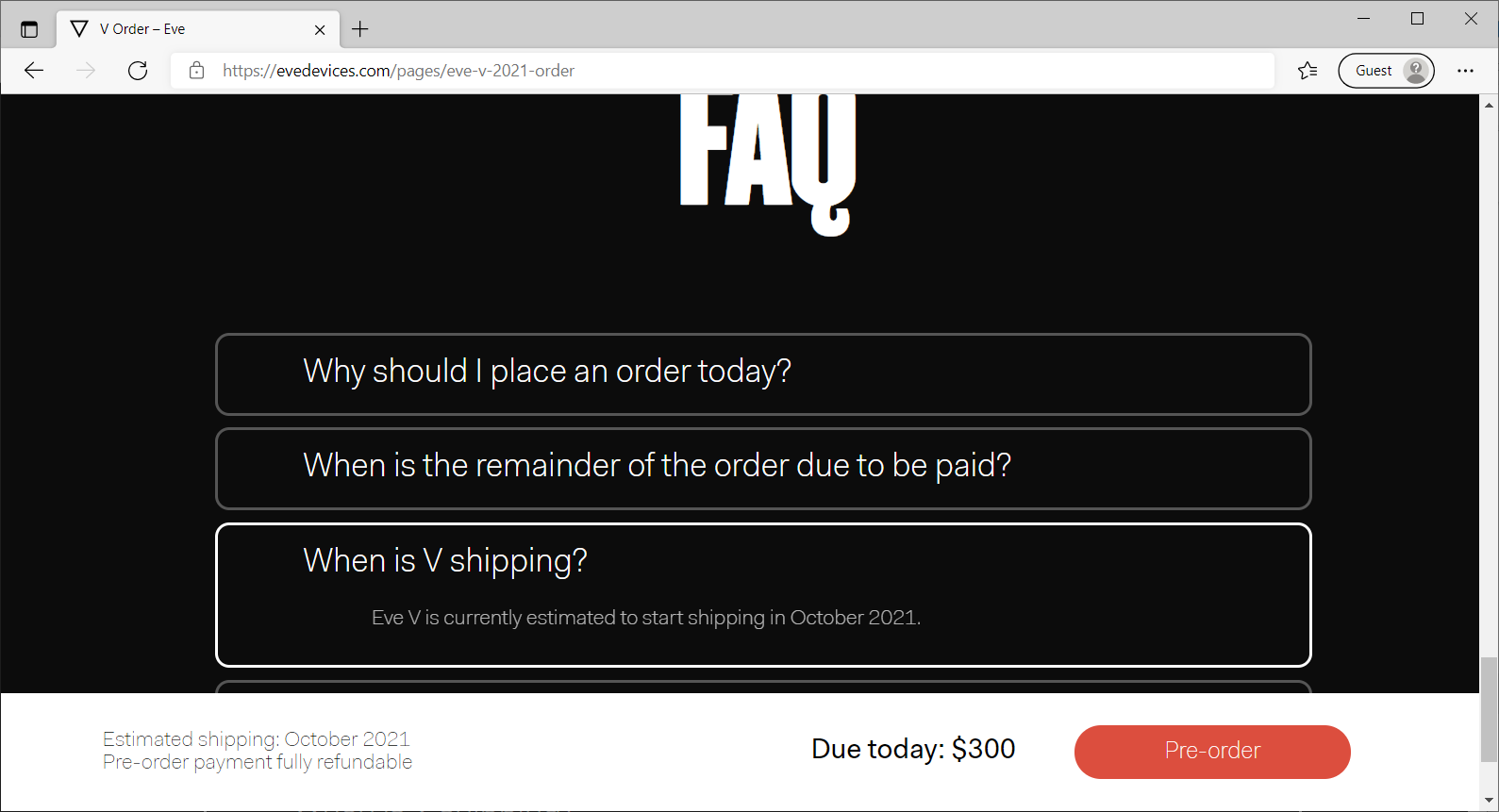 Rubbish. Stop lying! 13 days ago I was told production was going as planned:

Hey, @apgray, I just wanted to let you know that the production stage for the V 2021 is going as planned. We are monitoring the situation, and will continue to do so.

Now all of a sudden you figure out that power rationing in the factory is going to impact your production? Now you’re just insulting our intelligence.

You could have been upfront and told us this week’s ago that there will be a delay and declared force majeure.

It’s not the delay itself that I’m annoyed about. It’s the radio silence till the last minute.

It would imo have been far better if you’d simple had said as soon as there were reports outside of China of potential widespread rationing in China:

“Looks like there will be widespread power rationing in China. We foresee this will impact our ability to produce. We’re not sure yet how long of a delay this will cause but there probably will be some delay.”

Eve could have said that months ago.

The way Eve treat customers, especially one of the first 250 early backers is shameful.

Thats just 2 months of delay. Thats nothing against the time we waited for the old V. Please don’t start to doubt… I’m still happy if the new V lies under my christmas tree (although my SP6 is actually starting to behave like “I will die soon…”)
Stay strong eve staff…

BTW… I would be ok with a V which is delivered in some bubble wrap and a cardboard pasted with 100meter of tape. I don’t like the package design anyway…

To each his/her own @dibadibadu but honestly, I am not willing to accept the same conditions in 2021 from Eve Devices that I accepted in 2017 when they were just figuring things out.

I am certainly not going to trust anything produced by a company that can’t come straight with its supporting community about something as simple as delivery timelines or the screw-up around what is actually included in the ‘early backer’ deals etc… especially when this is not their first rodeo.

…it’s not about 1 tablet, or a bonus Christmas present… I need to be able to make a decision on the information I am given by the company/companies I pay for goods or services.

If Eve Devices wants to be taken seriously and treated like a real company, then it needs to act like a real company. Right now, this all feels like a dodgy Kickstarter campaign run by amateurs… and that is coming from someone who has backed them since the beginning of 2017.

It doesn’t appear to be that the delays are due to changes in the plan itself but for change in the delivery and shipping schedule. How that will be affected is another cause for concern.

I love the design but would not mind if a simpler but secure method of packaging could be used to maintain the shipping and delivery schedule. You could forward the original at a later date.

So it’s only packaging that is affected? So you can keep this promise and show us the mass production line right?

Hey, @apgray! We will show it off at once when the Vs start to roll off the mass production line.

your SP6 is ok, he’s only jealous…

I was going to sell my old V but thinknig about the battery life of the new V, I think I will keep it so I have a backup if the V-21 battery is hungry after 3 hours…

There are disgruntle funders. And silent anticipating ones. IMO it would benefit Eve to show something/anything of the progress made since the last video.

I don’t think we expect a well edited video or high quality. Just a video from a mobile to show what’s going on. Anything to show in good faith.

A delay is a delay. I don’t care why.

Anyone else wanting one of these V units made in the dark? What is Eve doing to ensure these units are of sufficient quality given they were assembled, you know, IN THE DARK?

Hi there I need help regarding a refund request for a down payment I made, as I am not able to continue with this order. I emailed on 27 September and was told the refunds will be made in 10business days. I have not gotten any emails since.

Definitely getting frustrated here and agree it would have been nice to get a notification sooner, especially since we have now all paid the full price for the device.
I would be nice to get something back for our patience, like a refund for the shipping costs, some sort of accessory thrown in, or something else along those lines.
I’m not trying to haggle for free stuff, but there are ways to keep people happy before you have another damage control situation on your hands.

I would be nice to get something back for our patience, like a refund for the shipping costs, some sort of accessory thrown in, or something else along those lines.

I think the early backers could be appreciated with a free pen, keyboard and a discount on the shipping costs.

Worth checking out how Eve have dealt with early Spectrum backers. They were promised that their devices would be shipped in first come, first served order and Eve did not honor that promise (a mistake, naturally). They have been asked repeatedly to provide some osrt of compensation to those backers (along the lines of what you suggest) and have repeatedly said they will not do that.

Although technically, this is pretty much what most of the early backers thought they had signed up for anyway.

I figure it’s the LEAST they can do