With all the Spectrum news, it’s been a while since we’ve talked about Project: V. That doesn’t mean we haven’t been working hard at it behind the scenes! We’ll soon have great things to show you, but we have a few quick questions about the pen before we get there…

We went more in-depth about our choices for the touch and pen experience of the new V in a previous topic. But that was a while ago, so let’s start by refreshing everyone’s memory about our pen:

We’re using Wacom’s Active Electrostatic (AES) 2.0 technology, which offers 4096 levels of pressure sensitivity as well as tilt support. We are already working with Wacom to make sure we get you the best performance and precision out of your pen.

The tip of the pen does what you expect the tip of a pen to do. But what can you do with the other end? The Surface Pro Pen makes use of a Windows feature called the ‘shortcut button.’ Pressing the button at the end of the pen can launch your favorite drawing or note-taking app, which can save you precious time between deciding you need to take a note, and actually taking it.

The downside of a button like this is that its wireless signal takes power, which will reduce the pen’s battery life. Also, because a pen with this feature transmits radio signals, it will require various certifications around the world, which has implications for the cost. 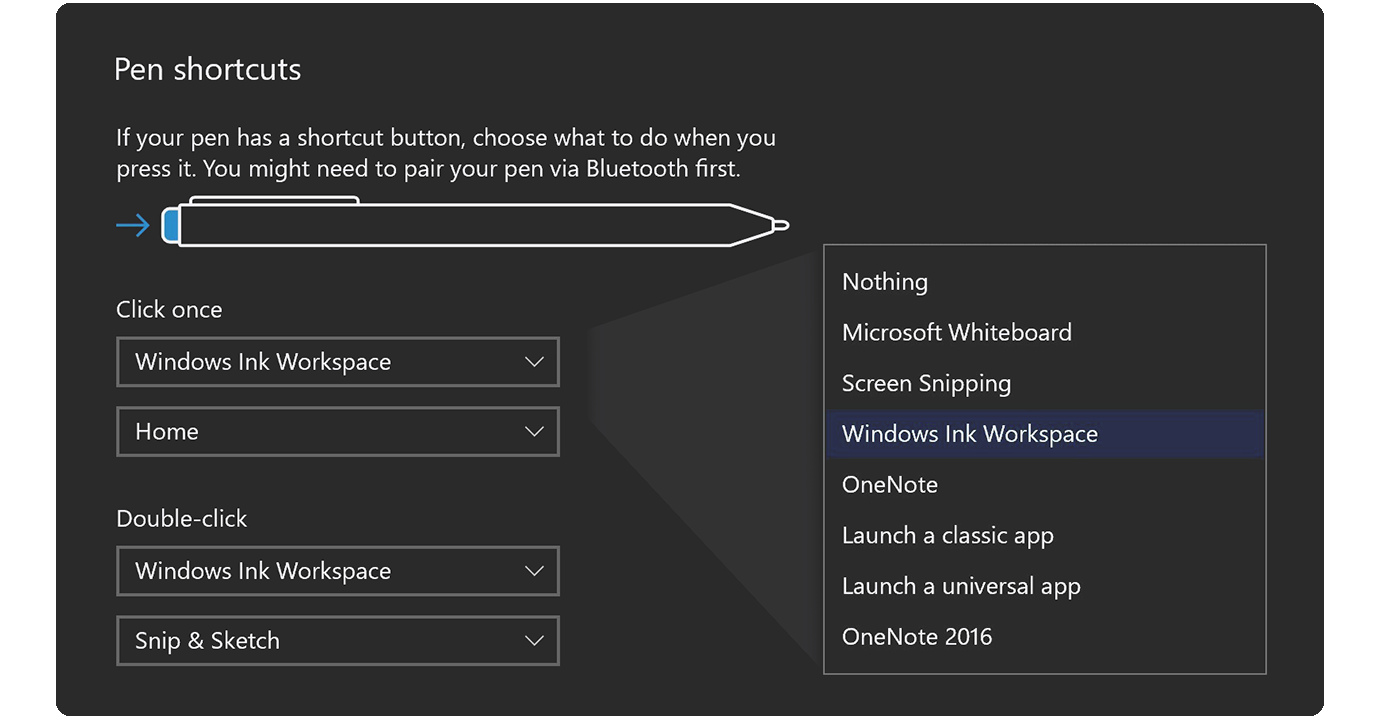 How do you feel about this feature?

Ever find that you know you have many pens, but there’s not one to be found when you need one? There are different ways to keep your pens pen from disappearing, and that’s what our next question is about!

Clips should be familiar to anyone who’s ever held a pen. They can be used to keep a pen from slipping out of your pocket, or to keep the papers you’re working on together. Or, you know, just to fidget with during class.

Tethers are a common method of attaching things to key chains, lanyards, or wrist straps. When signing or filling out forms in public, they’re also commonly found when companies don’t want you to steal their pens.

Finally, we want to ask: Where do you store your digital pen? When you’re not using it, is it stored with your tablet, in your bag, or in your pencil case? How do you carry it around? Be sure to let us know with a reply!

Doesn’t the Surface Pen operate using Bluetooth? How hard is it to meet radio certifications when operating according to Bluetooth specs? I’m curious.

There was a major issue for the V1 pen clip in that they broke off. So If a clip is chosens, with our without a shortcut button need to ensure quality manufacturing. Hence I voted tether

From experience, I would suggest a Wacom compatible pen with a tether. These are easy to lose so having the option to tether it and using a standard that allows easy replacement is the best way forward.

As someone who has been using various types of pens/stylii since the late 1990s, I would say that active pens with bluetooth support or battery powered pens in general are an unnecessary expense tbh and not compatible with every OS that may be installed on the system.

Wacom compatible pens/stylii work and are available from everywhere and from multiple manufacturers.

I want to store the pen with the tablet. I like the Surface Pro X method.

Don’t have room for magnets?

The same. It is a comfortable and safe way to keep and recover the pen.

I store my pen with my surface, with it magnetic holder.
I think it is a safe way to keep it when you transport your tablet.

I’d prefer the magnetic holder like the surface pen

I have a Lenovo Thinkpad and a Dell 5290. The Dell has magnets that let me attach the pen to the tablet. The Lenovo does not and I don’t have the pen when I want it or I have to hunt for it. I would say the only way to store the pen is with magnets on the body of the tablet.

I really prefer the pen to be inside the device so that I can get in the habit of storing it when done. I really like the way the Surface X hides the pen in the keyboard. I hope something can be designed that does not make the device uglier for non-pen users.

A clip is mostly used, as mentioned, to attach the pen to paper. But a Laptop with a digital pen is supposed to replace paper. So I certainly don’t need an ugly clip that can break off.
I would really like to store the pen with the laptop. Currently I have an extra pencilcase just for laptop accessories but I would love to store the pen more directly with the laptop.

Magnets are one of my favorite ways to keep things where they are. They magically clip into the place they need to be in yet easily come off when you want to use them.

I definitely want two or three buttons on the pen for ctrl-z, crtl-c and crtl-v. Not having at least one button slows down all my writing or artistic uses as I always have to move one hand to some on-screen button.

To be useful these buttons should be near the tip of the pen, not on the back.

Having to replace batteries sucks so a rechargeable pen would be great (either with micro-USB or better USB type-C).

I want to store the pen in the device, the place is safe and I know were it is.

I am currently using a Galaxy Tab series tablet, I purchased a case that allows me to keep the pen with my tablet at all times. I don’t see any reason in the world I would want to risk losing the pen carrying it in a pencil case or in a bag.

I have had 3 Wacom tablets- every stylus had to be modified in some way to stop them rolling off unlevel surfaces and falling. So, while I don’t necessarily want a clip, I would opt for a clip as a means to an end. Realistically, I would probably wind up buying some Sugru and moulding a lump somewhere on the barrel as I have always done in the past. The only problem with doing this would be if you provide storage within the V for the stylus- any modification would probably mean it no longer fits. :-/
So I guess my vote would be for a clip, but one that doesn’t snap off later!

I carry my pen in the case with my V. I would like to be able to store it with/in the device though and also be able to magnetically attach it to the side of the tablet while using it.

I don’t want a clip…they break. The tether just gets in the way. Round pens roll so don’t make it perfectly cylindrical.

I like the idea of a shortcut key. However, if putting it at the end of the pen comes at the expense of being able to have a rechargeable pen then I don’t want it. If it can be placed on the side without hurting ergonomics then that’s great.

Please, please, please, give us magnetic attachment to the side of the device. It is SUCH a useful feature on the Surface, and something a bunch of reviewers complained about with the first Eve V

If the pen doesn’t attach to the device in anyway I lose it everytime and then have to deal without and use another device instead of getting a replacement pen. If it attaches magnetically I’m less likely to use it but my track record with this isn’t stellar either. If it fits into the device I never lose it and is by far my preferred option.