It has been a busy couple of weeks here at Eve, including redefining the box design, adding and refining laser etching designs, and testing a prototype of the pen loop. Despite the power cuts in China, we are still moving forward with preparations for the mass production run, and that means we’ve got more updates for you. So, sit back, relax, and stay a while, as we play catch up on our latest progress.

As many of you may remember, in the Aesthetic Protection topic I did last month, we presented our choices for the front and the back of the box. We received valuable feedback in that topic, and I also want to cover a few things that were brought up there.

Fast forward to today, and we got a test print sample to look at in our hands. 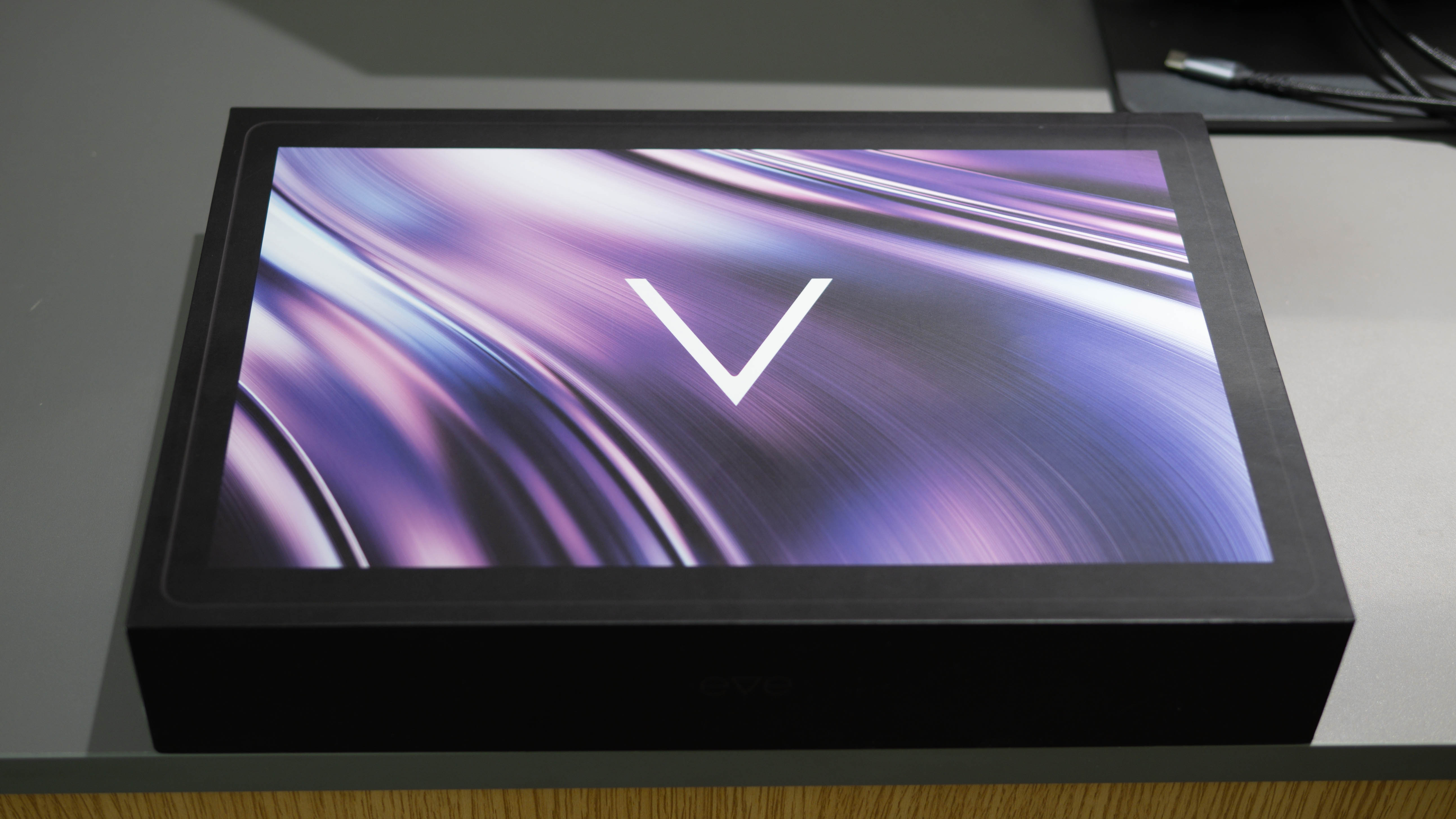 The earlier design for the top in a test print. Unfortunately, this design does not display the V well, in part because the bezels are too dark, and in part because the originally selected wallpaper was simply not sharp enough to begin with. Interestingly enough, this print illustrates the timeless idea that good designs do not always transfer well to real world samples - it looked fabulous during the design phase, but not so much in our hands.

Because of the above noted issues, @Joni, our industrial designer, went back to the drawing board. He details the following changes:

With these changes in mind, here is a look at the new proposed box:

New box, both top and bottom parts. Note the different image, the colors of the V on the front being black now, and the rest of the logos, model and icons on the back being a much more subdued gray, a more direct throwback to the first gen box. Now we will create a new test print with the new imagery and evaluate it again.

Laser etching on the kickstand 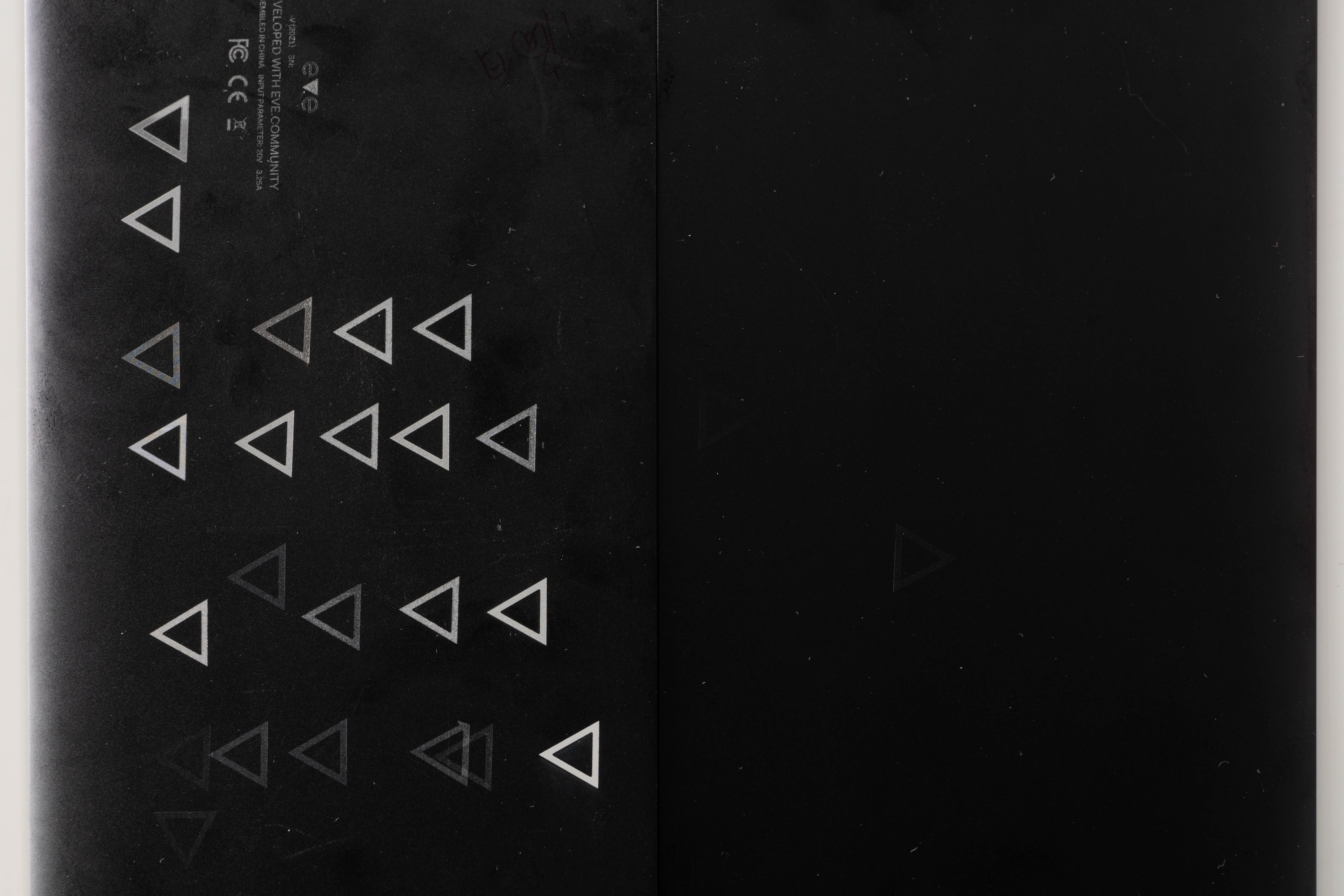 And now, for your viewing pleasure, here is a video of the laser etching process. 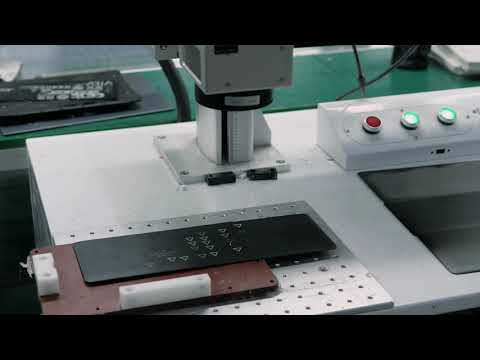 Our last look is at the pen loop prototype, with our feedback incorporated from the earlier samples incorporated:

The prototype pen loop is now a much more functional yet aesthetically pleasing product. The tightened loop now holds the pen much more snugly, as Grant (@Lore_Wonder) noted in replies to my previous loops topic, while the fabric matching, the loop color and the size all look good and feel great to touch. 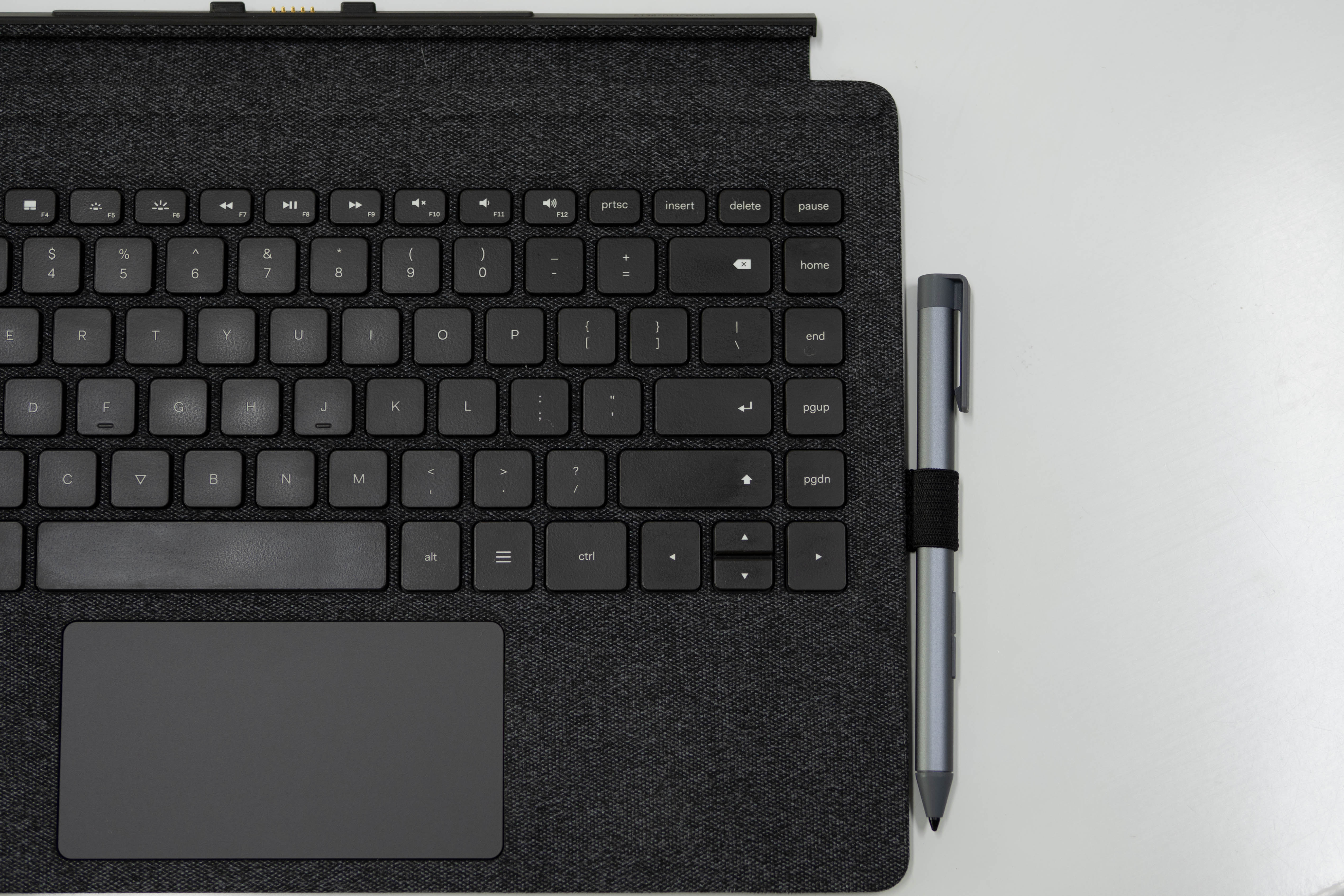 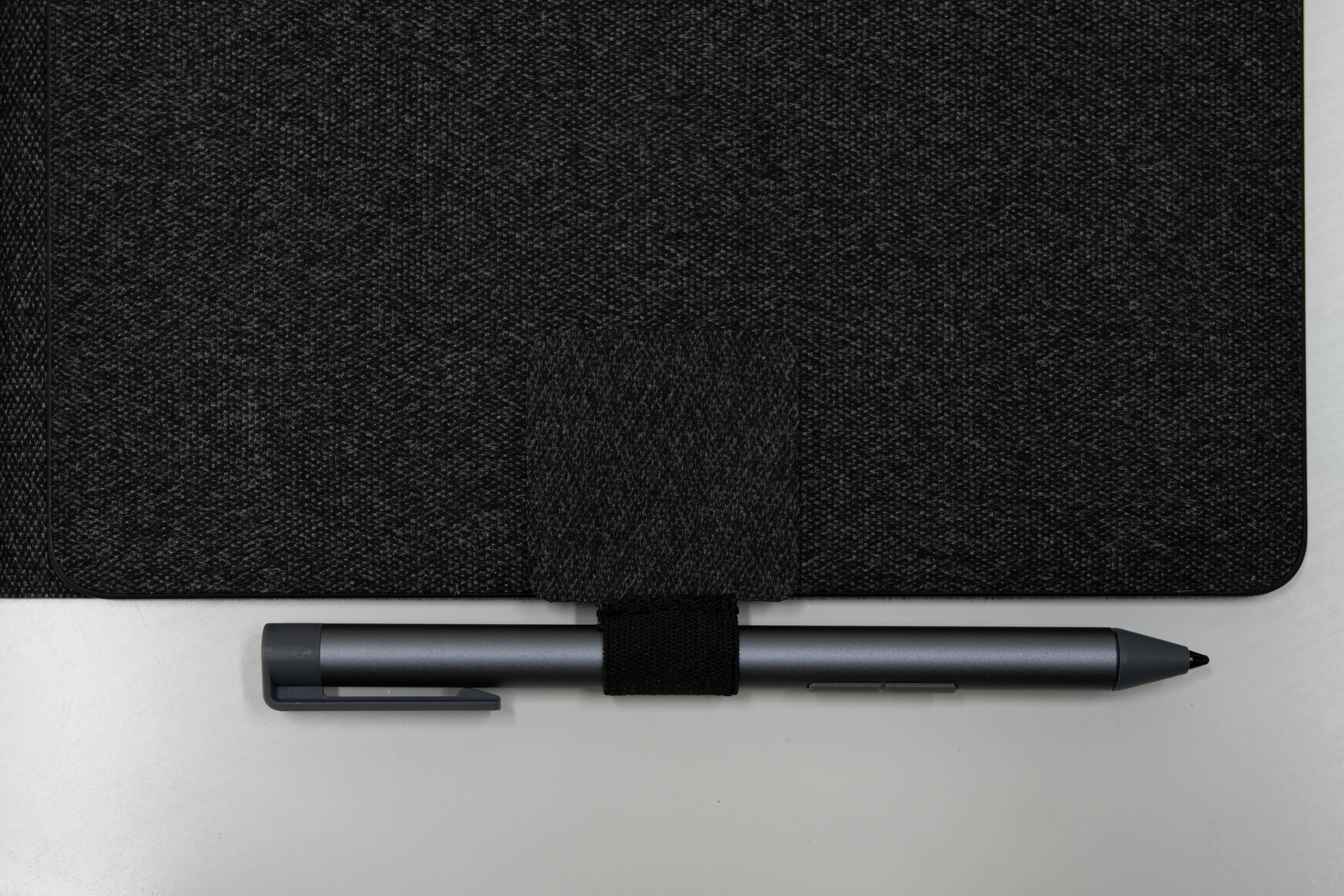 Rear view of loop. Note the matched fabric on the tab. 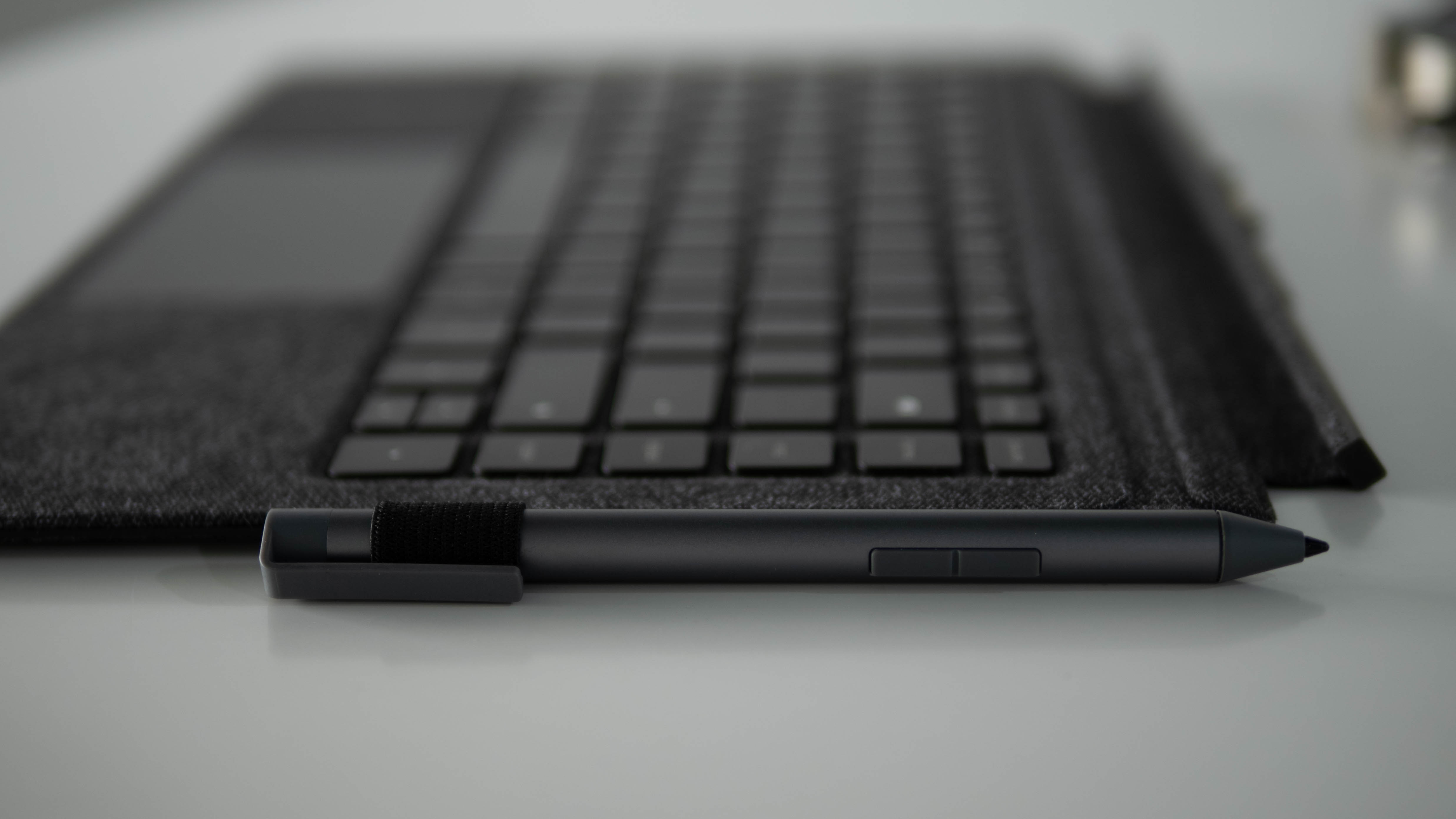 The pen slid all the way to the clip.

So, there you have it. We have been working hard going through testing, sample analysis, and conducting our own, internal testing to iron out small issues. We still have a way to go:

Thanks for reading and have a great weekend!

Is the reason the units won’t ship on time, a result of the persistent power cuts or because they are not yet in production?

If you are still sending box samples to be test printed, then you couldn’t possibly be packaging the units for shipping at the original date, which means your persistent power cuts reason doesn’t add up!

Second of all, how were units ever going to ship on time when kickstand laser etching and keyboard loops are not even finalized today… in fact, how will you even ship in 4 weeks for that matter?

I wholeheartedly agree with this response. I would interpret these conflicting updates as Eve saying that there are production issues while also saying that parts of the product are still being finalized.

At best, these contradictions represent poor product management and communication. At worst they represent a lack of integrity.

sorry for my Bad English and Hello

its device not like note or pen
it need time for QC but your company till today processing about box, loop and kickstand lasering?
its not important about box design with loop
box? it just need safty for device not important design
it just in trashbox after opened
loop? pen is just boxing my bag even my pocket
so its not important
kickstand logo?
before china power cut and we know that that cut is not long ago time its nearly this month
so your team should have done already about device made and QC with boxed this month for shpping.
but your team till today for box and etc…
is it my christmas present?

Agreed! Eve are focusing on the wrong things

good luck I ordered the 1st version and never recieved it, or a refund.

If the design is still in discussion I would add this to the front:

Come on, based on the other threads, we all thought you are done, and devices would be getting in the hands of reviewers soon! In fact, we are waiting for updates on when we can expect independent reviews, but now you are saying that the device is still unfinished? never mind the box, but the loop is part of the device LOL…

Why purple? Why not stick to that vivid red being Eve’s signature? That white V doesn’t fit, at least for me (my bad, apparently it changed to black, it looks better)

For all the messing about and waiting we are paying only slightly less than a surface pro 8 that we can’t open to change anything.

Will NOT be a repeat customer. Just not worth it.

Still waiting for a response to my emails. Have waited 1 month and still no response. This is really poor customer service

I actually liked the 1st version, the difference between the two does not justify the delay unless the delay is the reason why further refinement is possible. Ultimately products are known for performance and longevity everything else a consideration made possible by the success of the product.

The power cuts heavily affected the resource capacity of our packaging manufacturer. Without mass-produced packaging, shipping cannot start even if your devices have been assembled and tested. In light of the reduced packaging development speed, we adjusted the pace of the production phase to allow even more refinement to the device. For example, we will look into further improving the pen loop beyond what is shown in this topic, and the addition of kickstand laser etching.

@Lore_Wonder, Grant, please be transparent regarding this issue. Power cuts are indeed out of Eve’s hands, but the information you provide regarding their implications IS. With the information regarding these power issues and how long they will continue, does this have the potential to push back the V2’s release date even further?

The impact of power cuts does have the potential to push back the project even further. We’ll provide the communication as soon as we can if it becomes the case. That being said, at the moment, the end of November is still our best estimate for the start of shipping.

Sorry, I still don’t understand:
If power cuts only affect the packaging, that means the laptops should have already been manufactured (at least a certain initial batch), and are waiting somewhere to be packaged.

That’s what logic says, but if you are toying with Laser etching and loops, that indicates to me the design hasn’t been finalized, much less that a first batch manufactured - which indicates to me what you said, is not a complete picture - how can they start packaging once they are able to, if they aren’t produced yet, and you are still toying with the nuances of the design?

In theory, the Vs could have been manufactured as the packaging has no direct relation with device assembly. However, it would have been without the kickstand laser etching and would not accelerate the shipping start as the required packaging for shipping to commence will take longer to finalize regardless. Therefore, to efficiently use the added packaging development time, we are looking to add laser etching, refine pen loop, and implement other relatively minor but nice-to-have improvements.

maybe a little sticker-set for the worldwide users who have to deal with the one and only US-keyboard layout could be one of these improvements?

We could make a poll about these things… Or do you stopped asking the community for input?

I’m sorry to say that the pronunciation of the letter “V” is in fact different from the word “we”. I realise they sound similar to (German) learners of English and can easily be mispronounced or confused. Please be advised, not offended!

This was discussed in another thread. The US-ANSI keyboard has different sized keys to the ISO keyboards used elsewhere, so stickers would not work for counties that require ISO keyboards. If Eve provided an ISO keyboard, then stickers could have been a possibility (though they don’t work with backlit keyboards).