It’s Theo, the Community Reporter! I am back for more updates on the development front. This week we bring news on ES07DC9’s quality control (QC) following the road test that took place following the conclusion of our first mass production run.

We start by preparing the shipment pallet of ES07DC9 for easy access by our third-party QC team. 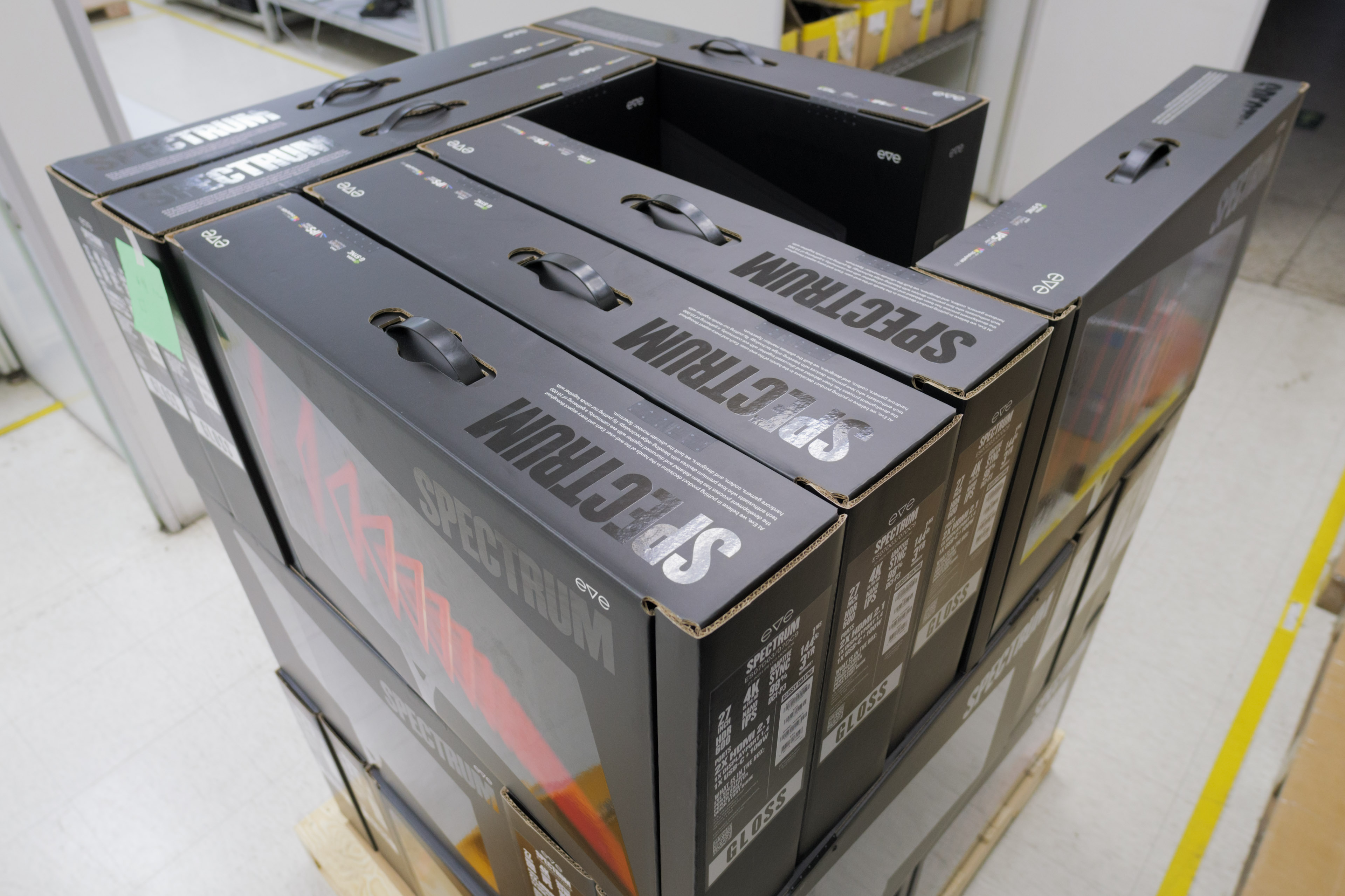 Half-complete pallet of ES07DC9. Here, another half of the units are already on their QC check.

Then, we unpack the monitors. This happens in a dedicated room, next to where the pallet is. In this room, we are not only doing the unpacking but also repacking post-inspection. The stands are checked as well, albeit in a separate process. 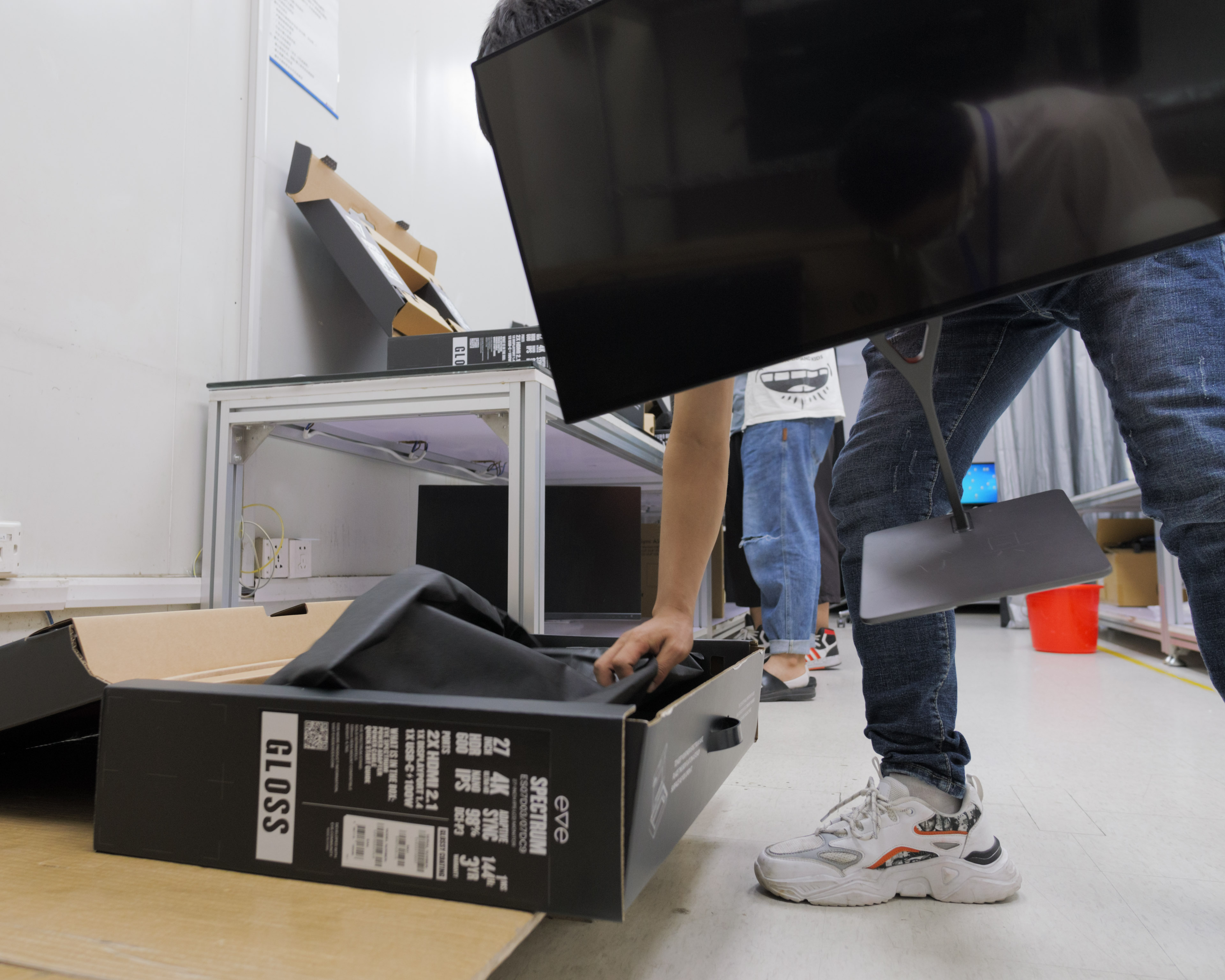 ES07DC9s are unpacked and attached with their separate Spectrum stand. If you pay attention to the base of the stand, it is written “testing stand”. This stand is not our retail unit and is only used for testing.

Unpacked monitors are then sent out to another room, where we have them set on the inspection desk. We have the monitors inspected not only for their physical integrity, but also for port functions, and the image quality.

Next, we go to the video. In the video below, you will see how the core QC check is done. If the unit passes the check, then it will go back to the original room to be repacked. If not, it will be sent yet to another room for further investigation.

In the video, we managed to document a few retail stands that made a creaking noise. Our mechanical engineer disassembled the stand to find out the cause of the noise and fix it for our next production batch. We will talk more about the findings for the ES07DC9 units in a separate section towards the end of the topic.

ES07DC9 units that passed the QC check are being repacked. The boxes have their own section, so as not to have them mixed. It is important to not mix the boxes because each unit has its unique serial numbers printed on the box. 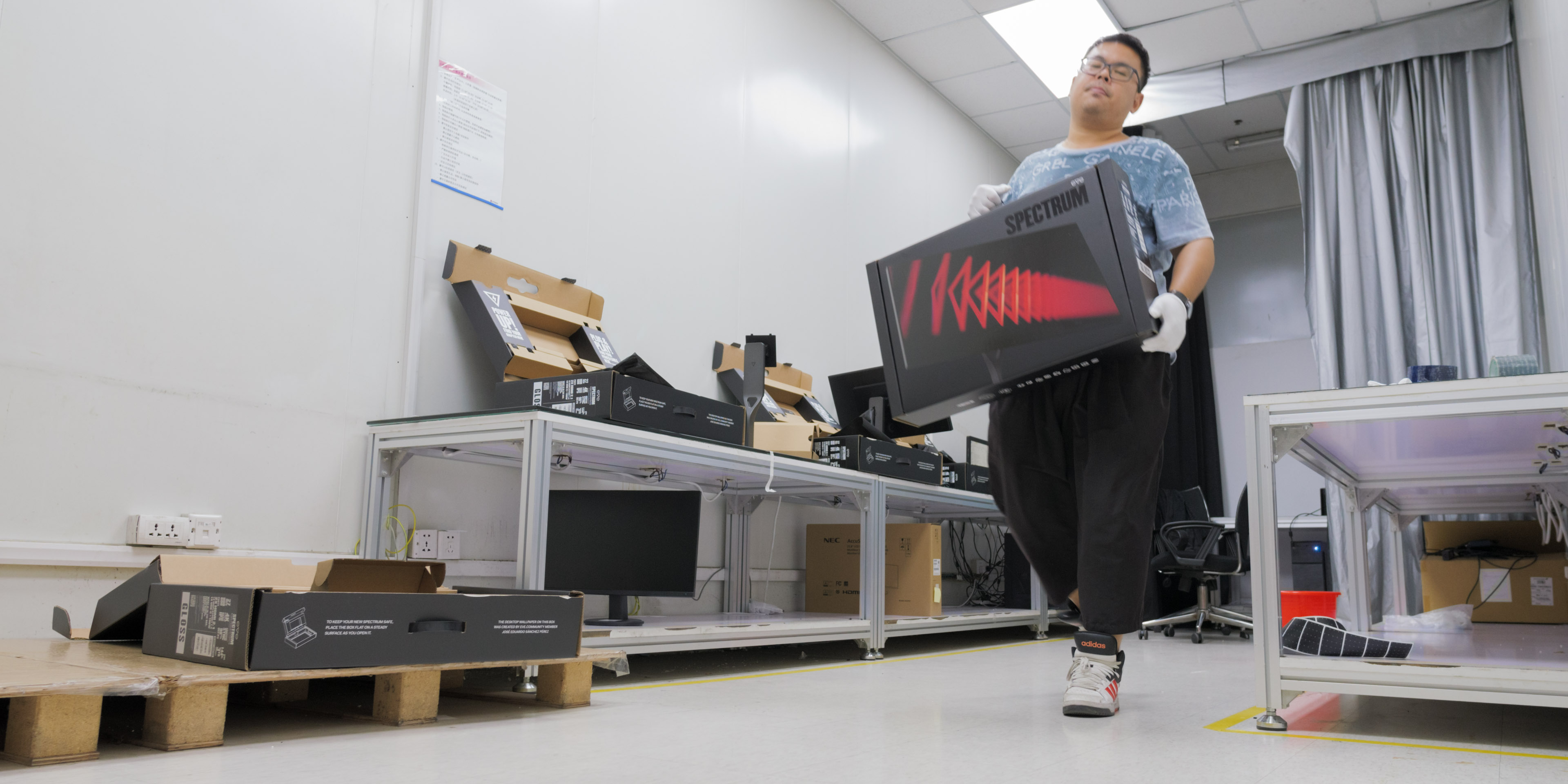 Monitors repackaged and taken out of the room, back to the pallet.

As a last touch, our inspection team scanned the barcode of the units that have passed its QC check to document and mark the unit as “checked and good to go”. 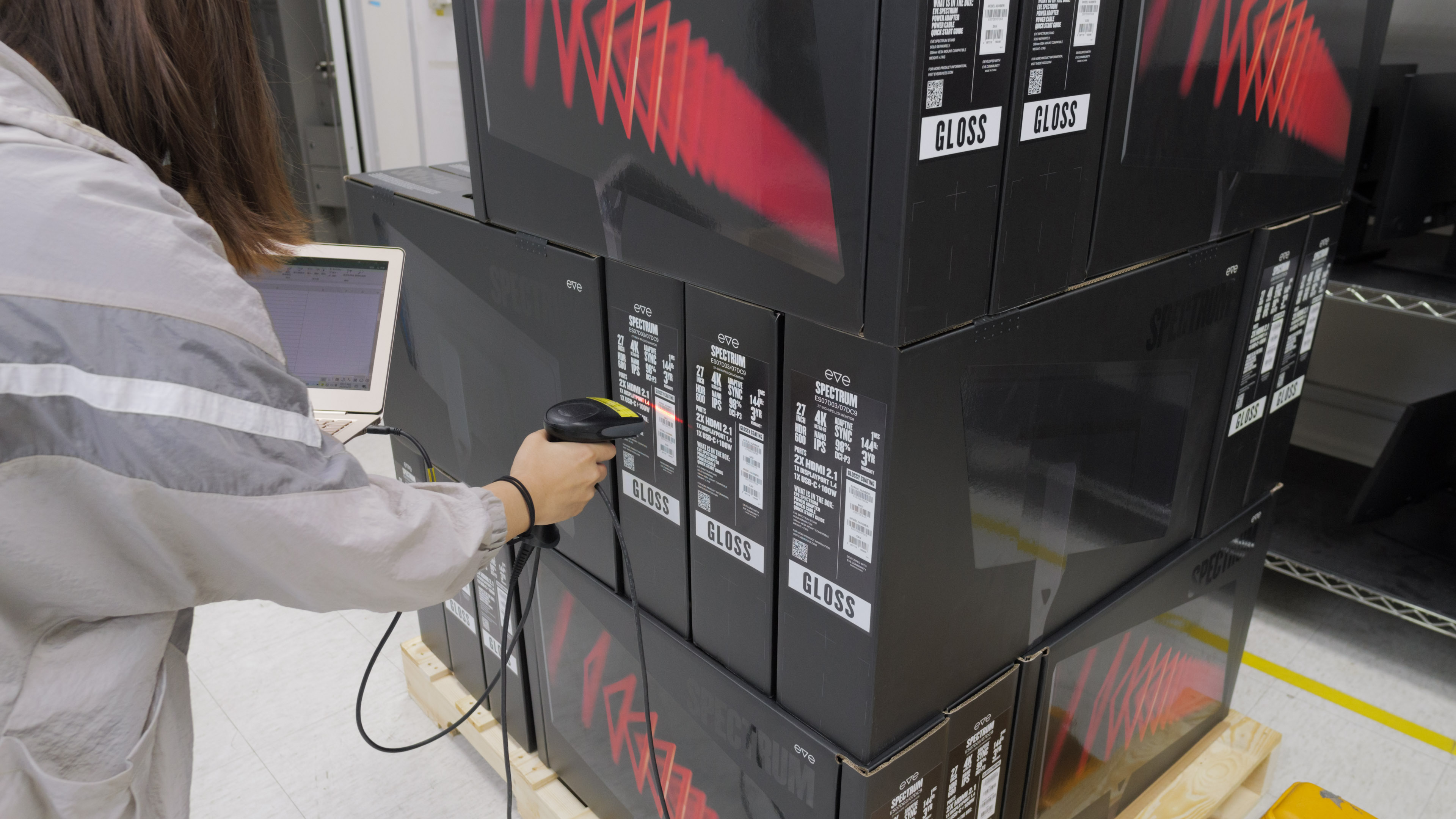 After repackaging is done, the units are stacked again in the pallet and have their barcode scanned.

Now that we have done repackaging and preparing the pallet stack, we discuss the findings of the inspection. 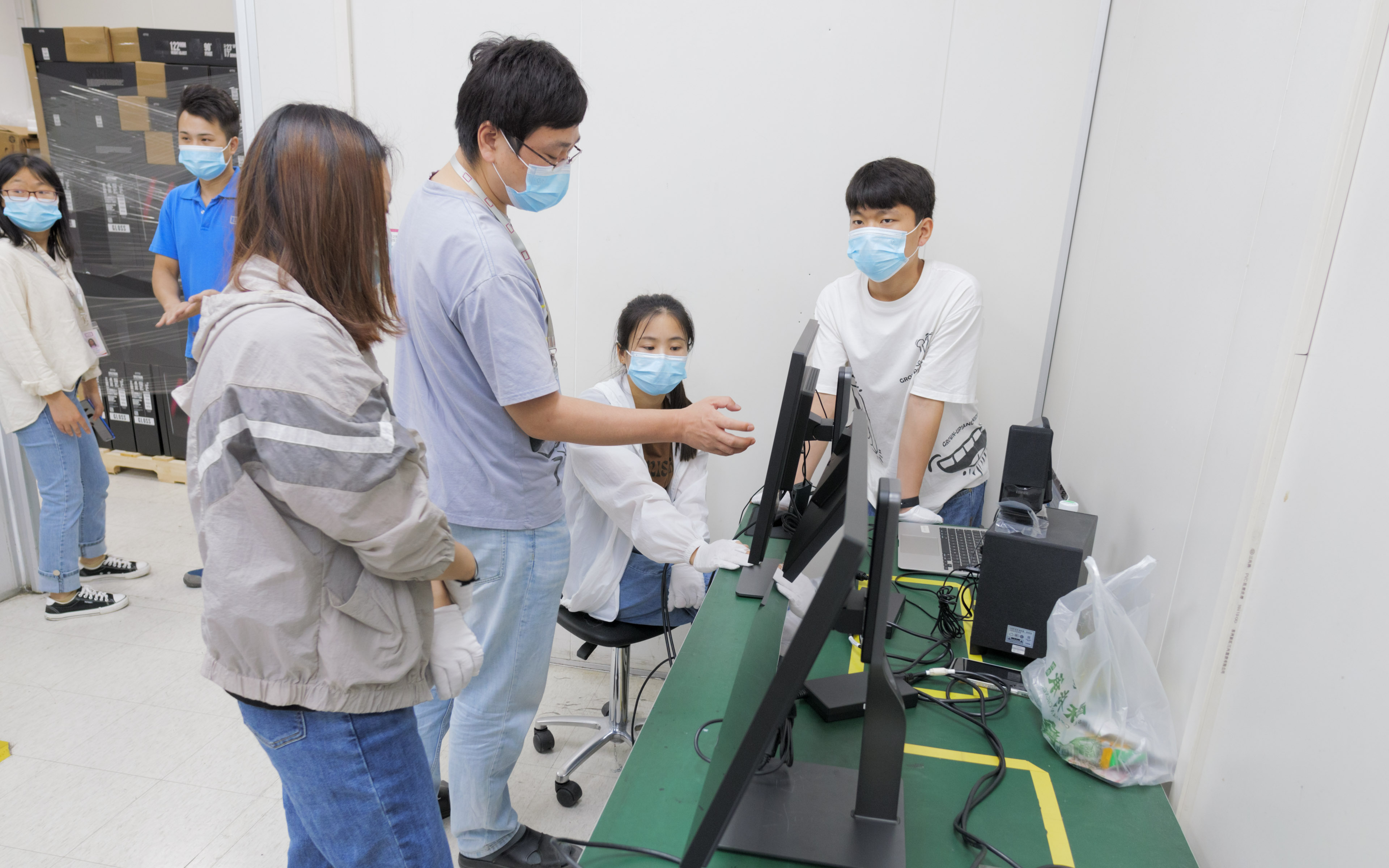 Our production engineer (the man standing in the middle with light gray shirt) discussed the issues on the failing unit(s) during the inspection.

While most of the units exhibit no issues, the yield percentage is not good enough to be considered a successful run and for us to commit to bigger-scale mass production. This means that there are a few things that need addressing at the production level and possibly vendor (supplier) level as well.

While we are aware this is not a really welcome development, it is important to note that ultimately we just want to make sure that the units are of the best quality possible when it arrives at your door. This QC check is very important for us to rule out possible issues that might arise, and address them sooner than later.

Let’s talk about the findings!

The additional adjustment and investigation to increase yield percentage obviously will cost time, and with that comes the delay of mass production of more units. This also means that we will have to delay the production and consequently, expect shipping of the rest of the units to commence in July 2022. This estimate is based on the time needed to iron out our production nicks. As always, we will keep you guys in the loop.

As you are aware, we have 90% of the units that pass the inspection. These units are going to be shipped out first along with more ES07D03 units going out towards the end of the month.

Thanks everyone for reading! Feel free to drop your comment below.

Regarding warranty - in case if I will receive a faulty unit, I will need to send it back to HK from EU?
I’m asking as even 97% yield is not something that fills me with the confidence.

When will I know if I’m among those who will receive one of the monitors that passed the QC?

What is the development status of the glossy 1440p display???

While it’s a bit disappointing the production didn’t meet the 97% QC rate, I applaud your efforts to ensure every product is functional and free of defects. Hopefully it’s a small setback and these issues can be easily and quickly resolved. Thanks for the update!

I haven’t, im still waiting for my matte 4K and a real ship date. Nothing personal to the glossy orders, but I want updates on the first monitor you offered not glossy.

Regarding warranty - in case if I will receive a faulty unit, I will need to send it back to HK from EU?
I’m asking as even 97% yield is not something that fills me with the confidence.

The key word here is “at least”. 97% is the least acceptable QC that allows us to continue with next mass production. Even so, that will depend entirely on the kind of error that is found. Even 98% yield with a major finding is enough to put a pause on the production.

When it comes to warranty - regional warehouse closest to your location will act as a hub.

When will I know if I’m among those who will receive one of the monitors that passed the QC?

You will receive a tracking number once it is on the way. The order is being sent on first come, first serve basis.

What is the development status of the glossy 1440p display???

Another topic will go live next week for ES07D02 (Spectrum QHD matte) and I am still preparing it as we speak. Until just recently that we have a significant progress since the last update.

Now, back to your question, the timeline for ES07DCA (Spectrum QHD glossy) is not established because the development of the model it is based on is not done. Looking at the schedule, we are still looking at October 2022 shipping date.

While it’s a bit disappointing the production didn’t meet the 97% QC rate, I applaud your efforts to ensure every product is functional and free of defects. Hopefully it’s a small setback and these issues can be easily and quickly resolved. Thanks for the update!

I understand the disappointment. At the end of the day, we want the products to ship out with no issue at all. We are not taking any chances that will cost us and our customers more money down the line.

I haven’t, im still waiting for my matte 4K and a real ship date. Nothing personal to the glossy orders, but I want updates on the first monitor you offered not glossy.

If we have much more concrete information on shipping we will definitely share it with you guys, but at this time we simply don’t. We have plans laid out as we reach the end of the month and we will see how it turns out.

I am still monitoring the shipping for the monitors (no pun intended). Once I see any movement, I will post it here.

You will find out of you are one of the first ones to get the unit once you have a tracking number shortly after I confirmed the movement.

hey @Cas would you pls kindly follow up with my order too? My order shipment is in HK. I’ve DMed you my order number previously.

Yes I’ll check for you. I will continue communication through DM

Why QC after final packaging? Should have been performed on the production line no?

As mentioned on the 1st MP topic, QC was done after packaging because we have a road test that follows after that.

Specifically for 1st MP run, QC is done for both the units after the road test and also on the packaging when subjected to shipping conditions. We can tell how well the packaging does its job when the unit inside is well protected from such conditions.

That makes little sense to do QC only after a “road test”. How would you know if a problem that arose after this test was a result of the shipping or something that happened in production? Maybe I am misunderstanding what you are trying to say.

That’s a great question and you do bring a valid point.

To put it simply, there are criteria on which issues are caused by packaging errors, and which ones aren’t. So distinguishing the source of the issue is not really a problem. Packagings are carefully and intricately engineered to do their function, and to make it easier for inspections to rule out the cause of issues, should there be any issues.

Next, to say that we did QC only after the road test is inaccurate! Many kinds of tests were done during all development stages and even during production. We don’t necessarily call them QC, but they are quintessentially QC measures. We always need QC in this scale of production and especially for the kind of product we are trying to make

To better understand this, all of us need to be aware that each production run is not free. Material and labor cost money. Any error that prevents us from bringing a functional product to our customers will cost us money. Products that are shipped and fail as soon as it arrives will still cost us money and even worse: a dissatisfied customer. So it is imperative for us to avoid, minimize, and in the best scenario, eliminate the possibility of error. I said it before and will say it again: we need a certain degree of QC on all stages to achieve that goal.

If we go back to the 1st mass production topic, you can see several testings were actually happening on the line. Units are inspected before being put on the box as well, so it is not just made, packed, and forgotten.

What is unique about the QC we are basing this topic on is how it emulates a customer’s unboxing experience. Hence why we conduct it after the road test. We do all of this because we want to get it right not just for us, but more importantly, for our customers.

That sounds great! I hope all the errors are able to be promptly ironed out and look forward to an update next month for full scale mass production and dispatch of this product!!

for those passed units will be shipped right?

totally understand QC control will impact the cost of the product, it would be a continuous process to improve the passing rate while delivering as long as it’s not a major defect in the production line

for those passed units will be shipped right?

Yes, the units that passed QC will be shipping along side with ES07D03!

Yes, the units that passed QC will be shipping along side with ES07D03!

When is this happening is the question. If shipping was to happening in June, we should be hearing something this week