The day is finally here… the first mass production run for our first glossy gaming monitor! ES07DC9 (Spectrum 4K glossy) has officially entered the mass production stage, and we are super excited to share the news with you!

Remember, this is a very important milestone not only for our Spectrum lineup but also for the whole gaming monitor industry! For that, we want to sincerely thank everyone for the support and enthusiasm for our glossy lineup. So, let’s dive in and see how things went on the production side!

To start, we have also put together a video quickly explaining the ES07DC9 production which will complement the points we are going to discuss. Please take a look!

This progress supersedes our previous report on ES07DC9’s production, with approximately one week gap in between. Having a smooth outtake on the mini build means that we were more than ready to commit to the first mass production run. Our team member Grant (@Lore_Wonder) visited the factory and did the documentation for us to get a sneak peek of what was happening! 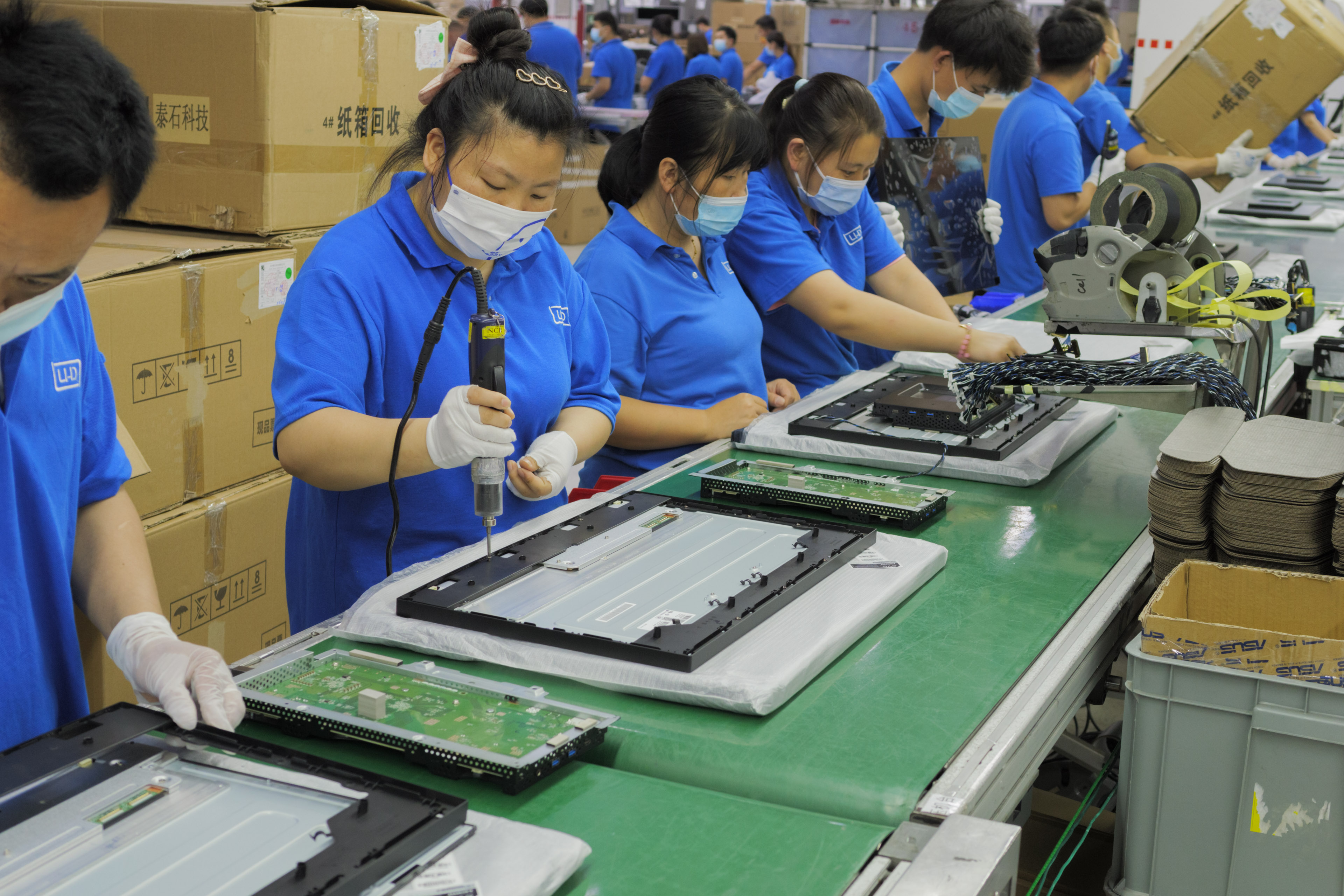 Our factory team was assembling ES07DC9. The metal box and liquid crystal module (LCM) were secured and connected with the middle frame. The metal box contains a pre-assembled logic board for our unit. 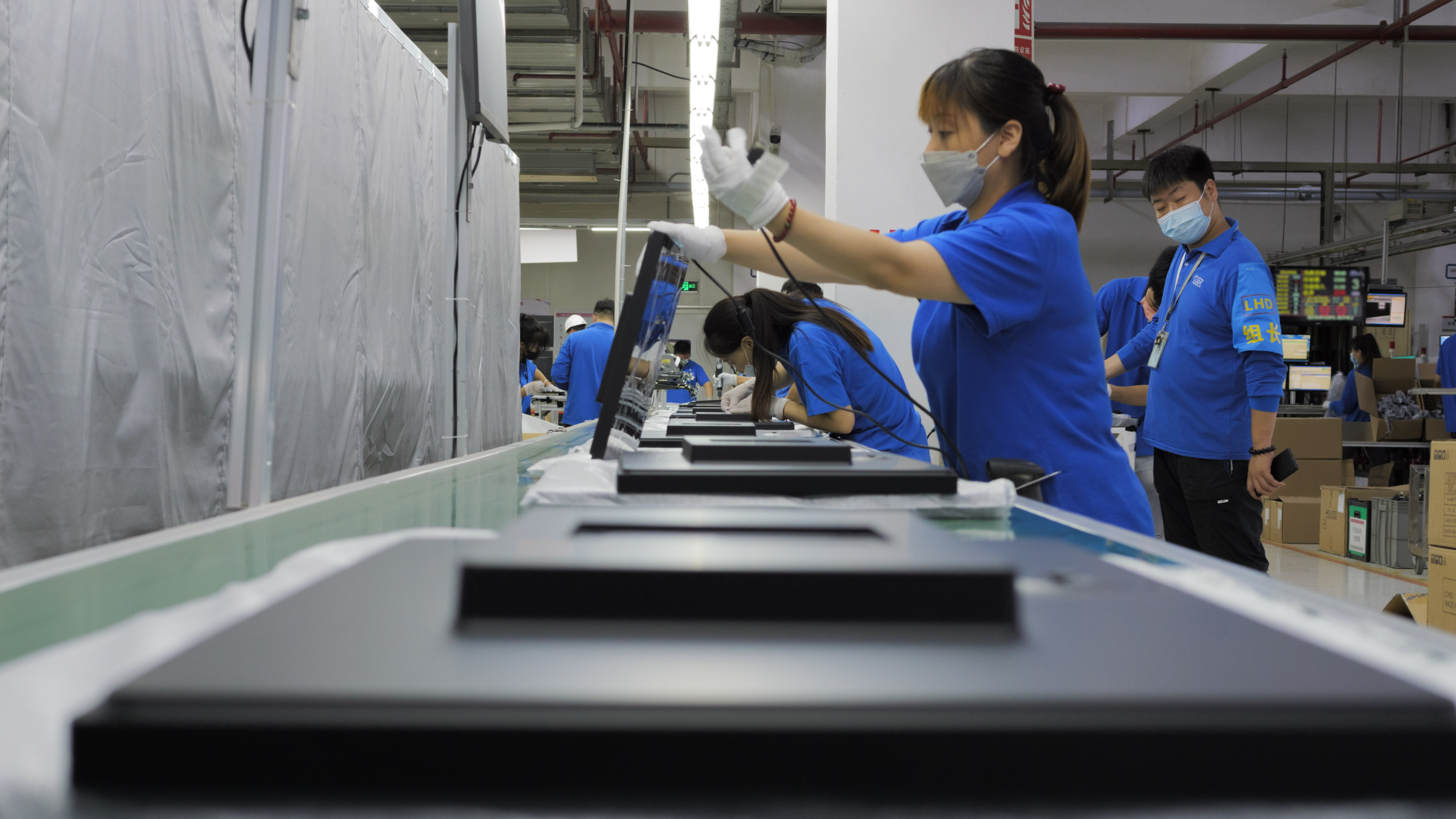 Product safety and barcode stickers were then applied on the back of the stand mount, followed by a preliminary video input test to test the basic functionality of the monitor: which is to display video signal.

Going into the dark (room)

After going through the first part of the assembly, our units entered the dark room to do their next phase of testing: burn-in test. This test involves subjecting the units to display a set of bright-colored images that shift after a long period. Early failures that might show themselves here, for example, are dead pixels and artifacts such as aberration. 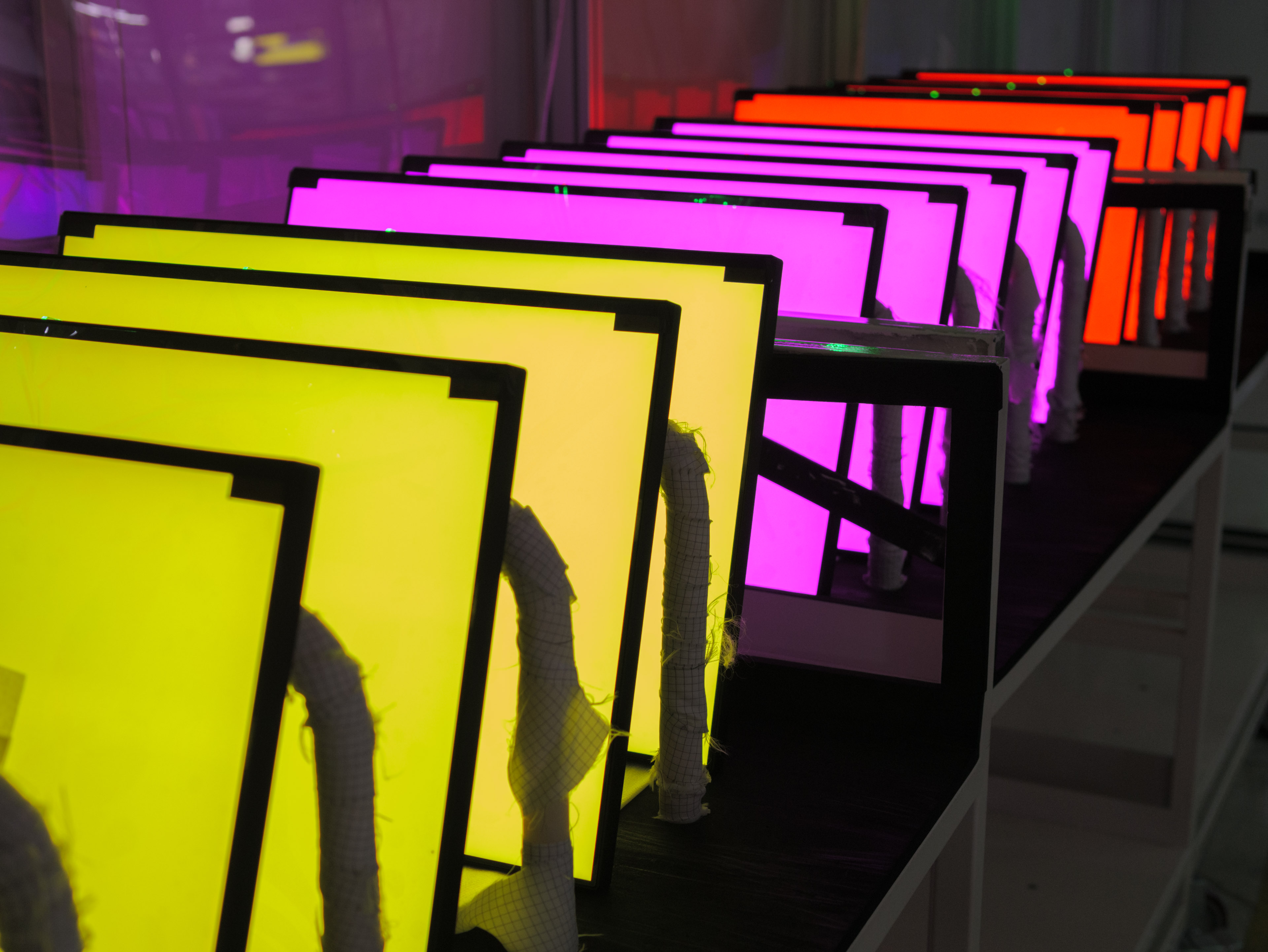 ES07DC9s on the burn-in test. The test involves displaying a spectrum of colors (excuse the pun). 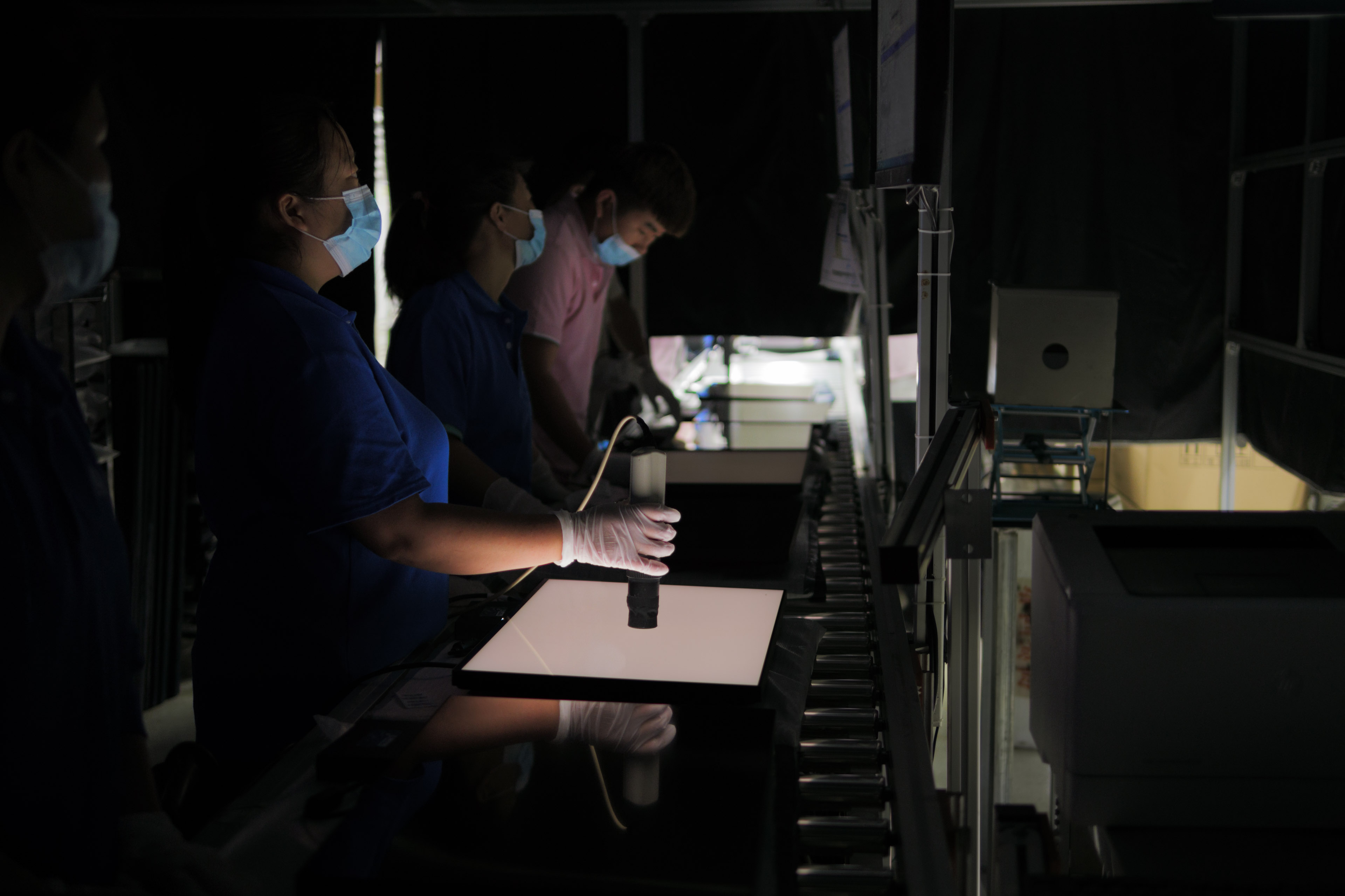 Subsequently, the monitors went through Delta E calibration, followed by white point calibration in the dark room. With a colorimeter, the monitors were calibrated on three color temperature presets: Warm (5000K), Normal (6500K), and Cool (7500K)

Back into the light

After the processes in the dark room, the units went through another test phase called “video and USB input test.” Like what the name suggests, here we test all the ports for video input and all USB ports to ensure they are functioning as they should! 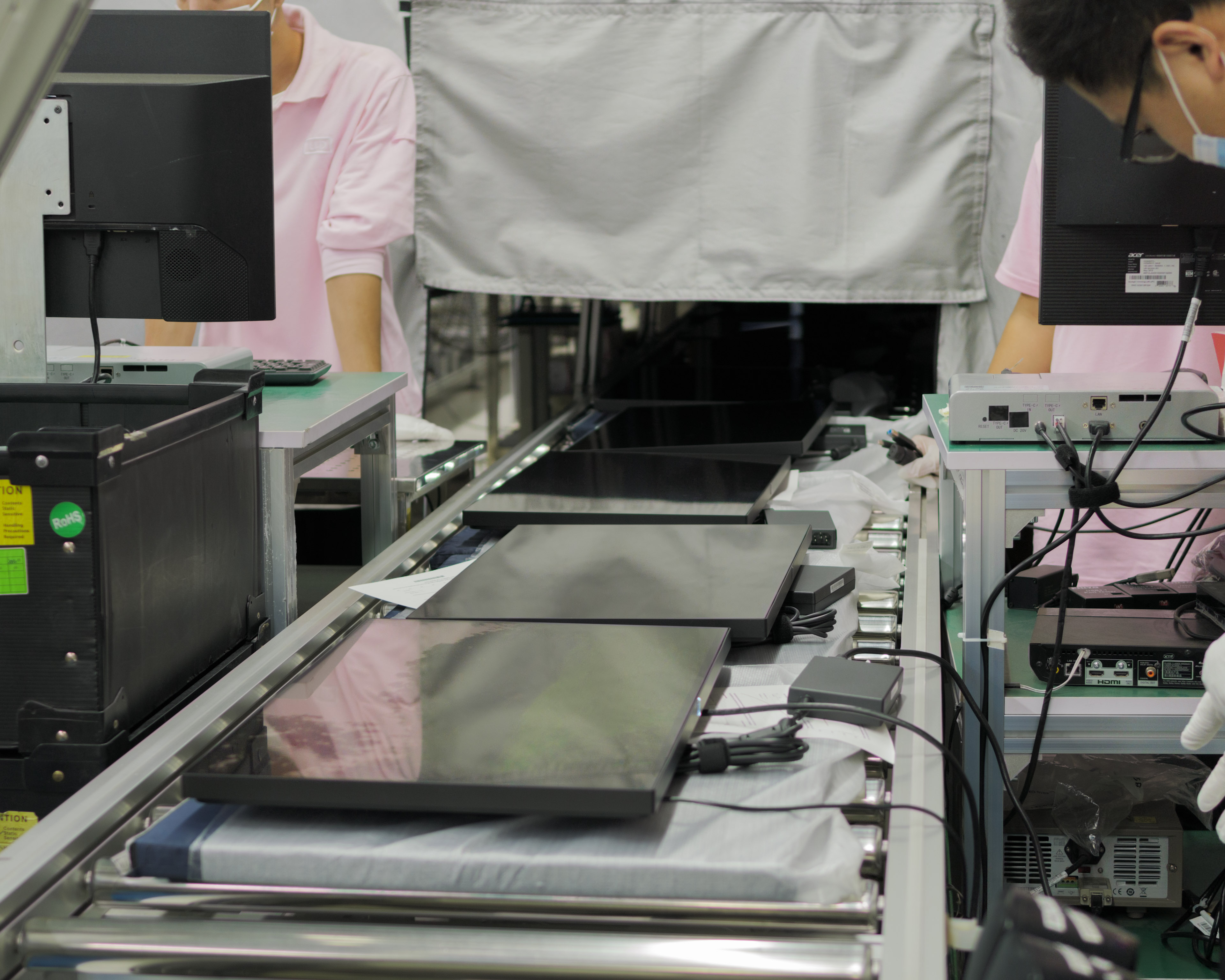 After this first mass production run, the units did a road test to assess the stability and safety of our Spectrum stocks on pallet stacks. The aim is to see if the products can withstand the hazards involved with the distribution process such as vibration and shock. Obviously, the packaging design and placement of units on the pallet play a very important role here. Having already done a similar test on ES07D03 past mass production means that we can use similar guidelines to find the right balance between safety and shipping efficiency. 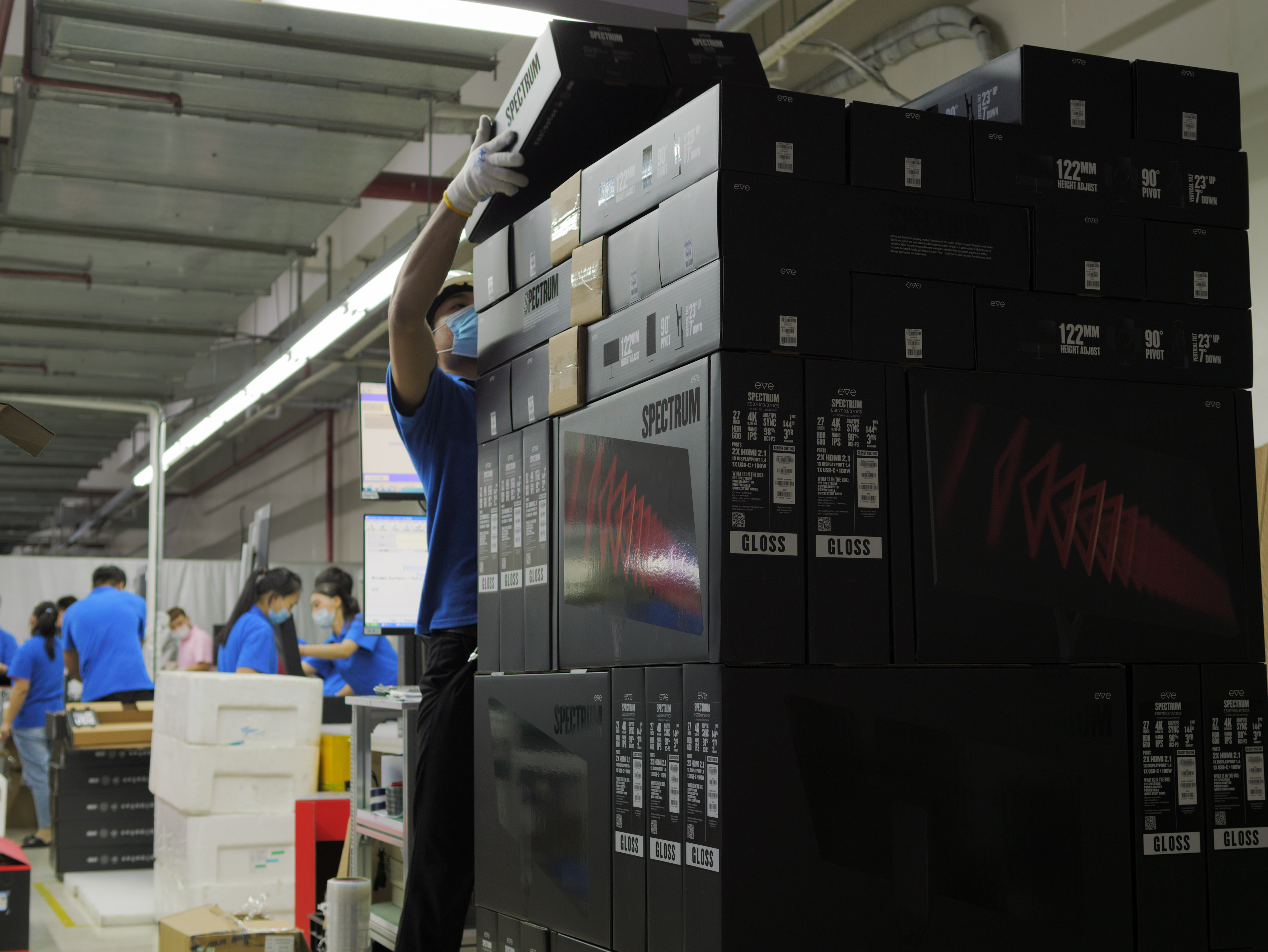 ES07DC9, all packed up and stacked on the pallet. As per our logistics manager’s request, we added the word “GLOSS” on the label to easily distinguish between our Spectrum matte and glossy models while they are still on the box. On each pallet, we can place 30 pcs of Spectrum, and 30 pcs of Spectrum stands.

For the road test, the Spectrums were loaded into a distribution truck, then subjected to a road trip for a full day duration. Our team then needs to do a full QC check for all units after the road test to see if they are well-protected and functioning normally.

After our units pass the QC check, we will commence the bigger-scale mass production. The time that we need will vary on the results of this first run. If there are no issues, we will undoubtedly start the next stage of mass production not long after this first run to get the units ready and shipped sooner than later!

With all that has been said, this concludes the update for our beloved glossy Spectrum! Feel free to drop your comment below.

!! well said @Cas thanks for providing such an update! Excited to see what the future holds!

Great news, but what does this mean for us still waiting for the matte version of the 4K monitors. I’d imagine you would ship those starting this week right?

Great news! Looks like Spectrum 4K Glossy will be ready to ship very soon! I’m very excited to finally see that beautiful monitor on my desk! I wish the production of the matte displays and V’s went as smooth as this one. I really hope there’s no problems for it when they get shipped out. Are the 1st 100 monitors going to be sent to regional warehouse and then to the customer or are they shipped directly from Hong Kong? Thanks for the update!

I will have to check with the team on this.

Great news, but what does this mean for us still waiting for the matte version of the 4K monitors. I’d imagine you would ship those starting this week right?

I am not entirely sure about the timing. If any happens this week then it will be our ES07D03 stocks only. Regardless, this ES07DC9 will not ship any sooner than the current ES07D03 which is already in stock. I am sure you know already, but for those reading who don’t, we have a dedicated topic for this. Any updates related to shipping will be posted there.

Great news! Looks like Spectrum 4K Glossy will be ready to ship very soon! I’m very excited to finally see that beautiful monitor on my desk! I wish the production of the matte displays and V’s went as smooth as this one. I really hope there’s no problems for it when they get shipped out. Are the 1st 100 monitors going to be sent to regional warehouse and then to the customer or are they shipped directly from Hong Kong? Thanks for the update!

With the problems we encounter using Hongkong as our hub, we instead arranged another warehouse in mainland China to bypass the issues. The ES07DC9 stock will be shipped via regular means: to the regional warehouses, followed by last-mile delivery to your address.

Regardless, this ES07DC9 will not ship any sooner than the current ES07D03 which is already in stock

While I’m not one with a 4k order (I mention to say I have no horse in that race in a sense), is it really genuine to call the D03 ‘in stock’? I’ve been keeping up with the shipping thread as of recent and have only seen people with orders from months back not being fulfilled yet which is supremely unnerving for future orders. I’ve yet to see mention of second round orders being fulfilled for that model which does conjure some ill deja vu about the original Eve V which I heard had only it’s first round of manufactured units fulfilled to then leave the rest of it’s customers out to dry.

I say this not to be solely cynical, but in hopes that Eve doesn’t just ignore the rest of these orders in favor of shipping out the new shiny device for fresh press and eyes on Eve. I truly hope these months late orders can be addressed responsibly and accurately.

In stock may not be the right term. What I meant is that we do have stocks to fulfil the backlog of orders.

As far as I know, the main issue with the fulfilment so far is shipping, which has frustrated us as much as our customers.

Hope all is sorted out soon and we get to see the true results of the new shipment operations.

What’s really missing here is some sort of guidance on timing windows. All of this is great, and love to see the progress, but at the end of the day my question remains - will I have my Eve Spectrum Glossy sitting on my desk in the East Coast of the US this month?

Is new firmware available yet? Having so many issues…

I am interested in the Spectrum but will hold off until some definite information on the V2 development, specifically delivery, is forthcoming. But, yes do keep me informed.

I sure hope so. I’ve had nothing but problems since upgrading from 104 to 106.

@Cas I’m one of the first 100 glossy orders. Im expecting it to be on my desk in Hong Kong by this month. Mainland China to Hong Kong, I guess it’s not that difficult yea?

I’ve been waiting since October last year when Hong Kong was still your main shipment center, but I waited for months and months until you guys released the glossy one and I upgraded it right away. Please don’t disappoint me again! It’s just across the border from china to hong kong man!!!

Can you please send me your order number, so I can have it checked for you?

Does this mean my order will ship this month? I ordered 3 glossy monitors on March 29.

I am not 100% sure yet about the shipping. The estimated shipping time of both ES07D03 and ES07DC9 has been pushed to July 2022 as per the website, but as far as I know, that applies to new orders only.

At the moment, we are still observing the new shipping plan to see how well it goes. Once we have the units ready and the shipping plan has proven to be working, we will ship it out as soon as possible—no reason to delay it even further.