Power Slider in W10 in creators Update. Will it work with the V?

Hi guys, todays i saw a really useful feature for me that will be released in Windows 10 creators update 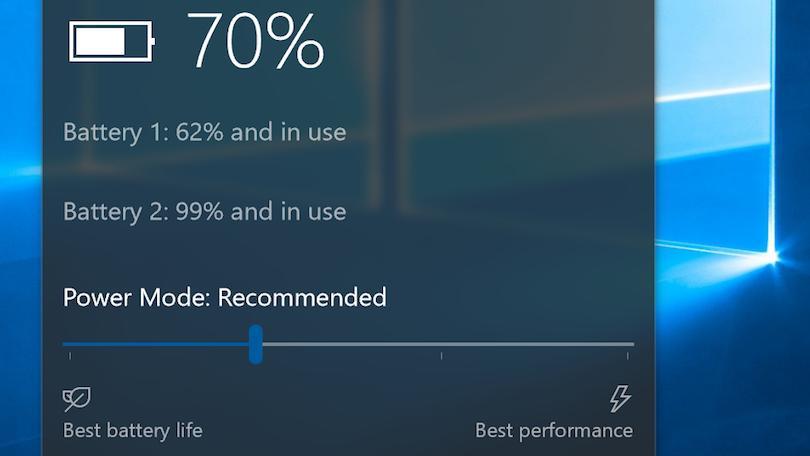 As i will use my V on the go, i’m really concerned about battery life. I know i will be able to change the TDP maybe in the bios or something not really handy. But with this settings under power settings in the taskbar it would be really useful and easy. Example if i’m home i could let this setting on best performance (i think TDP would be set at 7 W), if i’m on the go for the day i would let it mixed performance/battery life, and if i travel and just want to watch movies in the plane during a long flight, i would set on best battery life.

So my question is do you know if this feature is totally handled by Windows 10 or if EVE by a firmware update will be able to set this setting for us to get the best power mode possible?

I think it controls “standard” power features. Changes to TDP are BIOS level changes and probably not controlled by Windows 10 or the slider.

I think they best they’ll be able to offer is power saver → high performance (as an analog option) - keeping same TDP.

Just my guess from something that often plays with the registry to tweak power options.

As @Kirk mentioned, I also think that the slider is just for the inbuilt power-features of Windows. To my knowledge we don’t have access to the TDP within Windows.

@iKirin
Manufacturers need to define which position of the slider does what. The only position that is pre defined is the position at the left (best battery): it activates the battery saver mode, but only if the device has one. All other positions have no effect without the manufacturer doing additional work.

Read the English source, doesn’t say anything about manufacturers needing to implement any extras.

Furthermore, it wouldn’t really make sense for separate manufacturers to make their own battery saver algorithms, since it’s all software-based and they’re all running pretty much the same hardware nowadays. It’s much more logical for Microsoft to build this power optimization feature straight into Windows.

And last but not least, Windows already has quite extensive battery options, and you can have custom power modes. There’s just no easy access to them and I believe that’s what they’re planning to provide with this update.

As to why the slider is not fully functional yet, they probably plan to make those power profiles pre-configured for various levels as opposed to relying on the user to configure them himself, and they’re still working on the profiles.

Well, that was what the German source said: manufacturers need to implement it otherwise only the position on the left is defined as best battery mode. But apparently Microsoft does not yet fully know what to do with the slider, so time will tell, I guess.

To me it seems similar to the the power management programs from asus or msi. Don’t think it manages the TDP but more as a simple over all one click power adjustment gadget.