Power button, wake up, and a few other issues

Dear all, I hereby welcome myself back from a 2 month abstinence that was basically caused by me having received my V at the beginning of march and loving it, except for a trackpad and keyboard issue that unfortunately hasn’t been resolved to date. But that’s between me and customer service (for now), so I won’t get into it.
First of all I apologize if I’m about to raise issues that have previously been raised and maybe even solved - I will blame it on my absence. So:

You may want to start by updating the V-drivers.
By the way, which version of windows are you using?

Oh well shame on me, could have taken a look at the drivers page. Will try them and report back. There are no drivers there that will improve BT keyboard and trackpad though, are there?
Windows: still on version 1709 if that’s what you’re asking

There’s no problems if I just go through the entire driver download list and just install them all right? And obviously the next step would be to restart V after that right?

There is a v-driver update package available.
You’ll find it here: https://eve-tech.com/pages/support/ and hit download.

Try one, restart and see if everything is ok, got to the next one and so on.
For the moment keep the 1709 version of Windows and wait on the promised bug fixes before update to 1803.
hope it works out ! 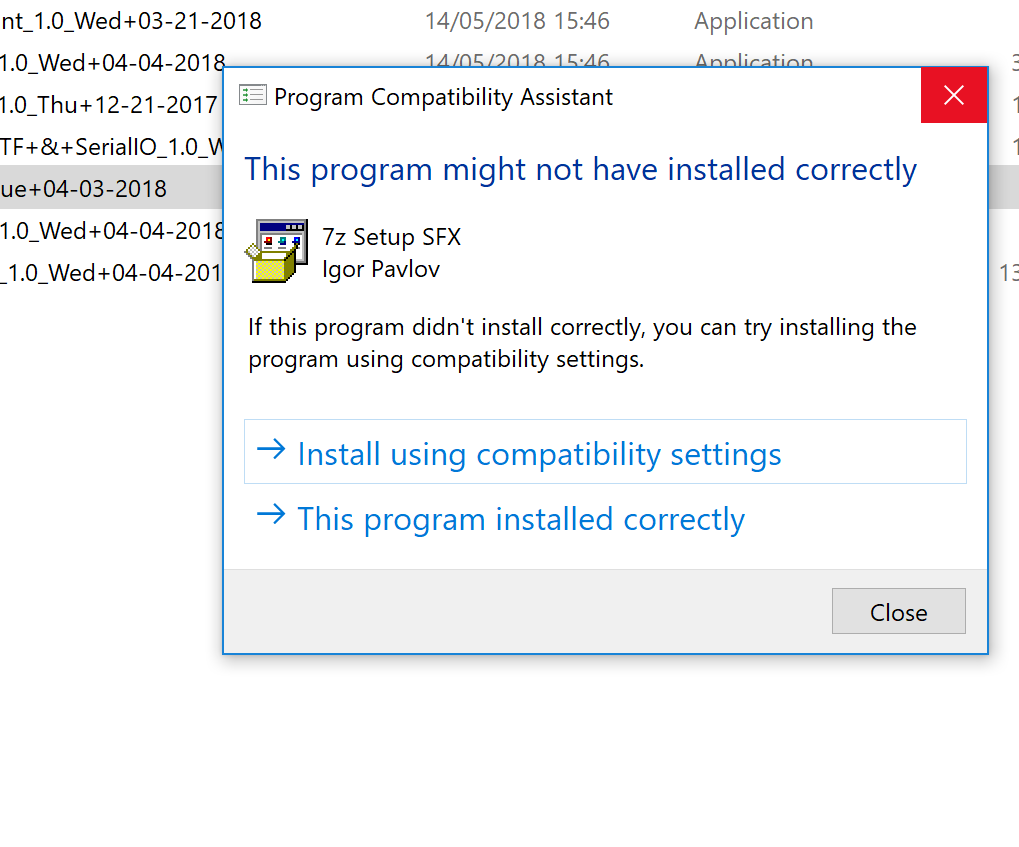 keep getting this message, what does it mean?

There is a program called 7z setup SFX does not install correctly.
Do you still use it?
If not, you why not delete it (through the uninstall apps setting -winn+I)?

a) provide driver updates more quickly, as we just have to package them
b) give a very easy way of installing them

@uwetieforrest Which installer did give you this prompt? I’ll later check for the reason it’s not showing it’s installed correctly (but I’m pretty sure it did install correctly as I’ve tested all the drivers before pushing them to the website)

Thanks for the necessary update.
Sorry for the blind spot.

@iKirin sorry I’m not sure I get your question. If you mean which one of the drivers left me the message, I don’t know as AML’s advice rached me too lat and I jus went ahead and installed all of the latst drivers one after another. The window just came somewhere in between and I don’t know when exactly…

OK now I was lying. Haha, out of laziness. I had installed all the drivers in the list except the last two/ I just tried installing the second to last one (Sensors_1.0…) and got the popup again

Updated the audio driver on the V: got all lost volume -update to 1803- back.
The v sounds much better than the spouses Ipad.
On has to setup the sounds to his likings off course

Ok thx I’ll check it out later what was the issue with that!

Sensors. Lol iirc that was the one with the funky cmd script in December.

@uwetieforrest If you’re kind of handy with computers you can just open the exe as an archive and do it yourself, as far as I know the exe just automates the unzip —> double click process.

Will the upcoming Vs have all these built-in updates?

unfortunately i am not handy with computers

They should have all of them, yes!

We’ll however have new updates that you’ll have to install to further improve your V experience!

This is really something that I appreciate a lot, many companies do not bother to to it , yet you are. Thanks again!

I personally find that when i press the power button the wale my V. It unlocked in less than a second then lock the device immediately again. Its frustrating.