Finally the Time has come that I was able to unbox my own Eve V yesterday. Here is my Review and my Impressions (Please forgive me for grammatical errors since english is not my mothertounge):

Unboxing (No Spoiler):
The package came with the inflated protection (so i guess the Airpump from 4px is finally working

) and the unboxing experience was just awesome. The Box was pretty noble and i cant remember the last time I was so excited to open a package. Everything I ordered was inside (Sleeve, the right Keyboard Layout etc.) as well as the goodies.

I guess this should’ve been the invoice.

The Screen/Housing:
As a graphic designer i was hyped about the new Sharp Screen and had a lot of expectations and I have to say ITS F***KING AWESOME I love the colors, its really nicely calibrated, really bright, and it just one of the best screens i ever had. I couldn’t stop watching 4k Videos for testing

also I turned off the calibration tool for testing and there is a very noticeable difference. Also in tablet mode the “Touch” is working good the only thing is that you see all of the fingerprints on them and on the back of the housing. I washed my hands before using the V and you still can see them. I also found that the engravings (ID Number, special HEB Engraving etc.) is really hard to read (I needed a flash light at the right angle to be able to read it).

The Keyboard/Trackpad
The first thing i recognized (coming from a Surface Pro) was the weight of the Keyboard. I guess it comes because the Bluetooth and Batterie. Its not that much more but noticeable and it probably takes a few days to get use to it. The Typing experience is OK I love the travel distance but with some of the keys i have the same issue as described by others. Some Keys are more “clicky” than others especially the “ENTER” Key which is really annoying. Also when using the Keys right at the edge they are not working and tend to get stuck. The RGB Lights are a really cool feature and i have no Problem at all with the V and the Opps Key. They Keys are aligned really good i especially like that the arrow Keys are “normal” and not aligned like the surface keys. The Air mode Button for me is useless since i hardly need it and if i do i can change it in the info center pretty fast. Would be cool to if I could change the settings for this Key (for example open info center or something like that). As for the Trackpad after changing the Settings it works fine, a bigger one would’ve been better but i can work with it sufficiently.
The Bluetooth Function is really cool and I found it easy to set up. I noticed that while using it the mouse is sometimes jumping a bit i guess it comes from the connection/data transfer speed. Over all i think the Keyboard is the most i can complain about and I’m not too happy about it right now.

Questions @Team or other V Owners:

Speakers/Sound:
I was really afraid to test them since there was a lot of bad reviews on them but i have to say they work just fine. I’m not a sound engineer but both of them are working and the volume is also ok. Sure there is not a lot of bass going on but i think for a 2in1 i cant complain at all and i guess teaking them could improve them a lot. Also with Earplugs I have nothing to complain about.

Pen:
Well let’s just say it works OK for taking notes and for basic stuff. The magnets (from the Batteries) is OK to attach the pen but wouldn’t hold shaking the device a little or walking around with it. I can confirm that this is an issue with the V Pen not the device my Surface pen is attached a lot stronger. Sadly the Buttons on my Pen tend to get stuck while pressing them so i have to press multiple times to “unstuck” them. I guess coming from a Surface I expected more. As for the Palm Rejection etc. I had no problem at all.

Ports and Batterie Life:
I tried every Plug expect the Thunderbolt 3 since i have nothing at home right now were i can test it. Charging works good (on both USB C Plugs) didn’t had a chance to test out the battery Life since i always used the charger. As for the other ports its cool to have them. There pretty tight so you have to use a bit of force to plug and unplug them but i like it since my other devices tend to be to loose and the cable is falling off.
I noticed that my USB Type A are built in the wrong way. Normally when plugging in a USB they have this little USB Sign on the Cable which is facing towards me (or up) at all my other devices, with the V they have to faced down. Not a huge deal just have to get use to it and as info for further production.

Sleeve:
The Sleeve makes an really good impression. The Zipper (which model i got) works fine and has some kind of rubber protection above it (i guess Waterprotection). I have to admit i was so excited to use the V I didnt try if it fits in there nicely but i will update this threat as soon as i try it out.

Software:
I messed up the Configurations while starting and Updating the V (my fault

) So i did reset the V (which i read in the Email ive got about the instructions isnt a good idea). I did a hard reset (also personal settings) and it worked perfectly. Also the Screen Calibration (which i obiously saved beforehand) stayed on there. So no Problems there for me.

Conclusion:
I love the Eve V Im glad that I ordered one. Most of the negative things i mentioned are minor hick ups (since this is 1st gen) which i can live with. The only thing which I can really complain about and i would like to see changed is the Keyboard since i use it alot. With the Pen im not happy either but I didnt expect alot from it and its nice to know that i can switch it with a different stylus (although it costs extra money).Other then that I can recommend the V to everyone who is thinking about an 2in1 System.

If you have any Questions feel free to ask

Thank goodness for a friendly and rational voice.
I am very happy to hear about your experience so far.

You are a breath of fresh air in a sea of impatience and overreaction.

Your descriptions and feelings are confirmation of the good judgement of those who bought a V.

Great review. Glad to be seeing more people sharing their experiences. With all of these experience, support should be great going forward with fixing a lot of the bug

The paper sheets in the box are supposed to protect the goods from clumsy ppl that use the cutter with 2+cm blade to open the box or to prohibit dust entering the box.

thanks for the clarification

I have a similar issue with the keyboard. I noticed, that the keys are not placed centrally in the alcantara/housing, causing this “sticky” feeling. I have a small gap on the left side of the keys and no gap on the right side. What do you say? 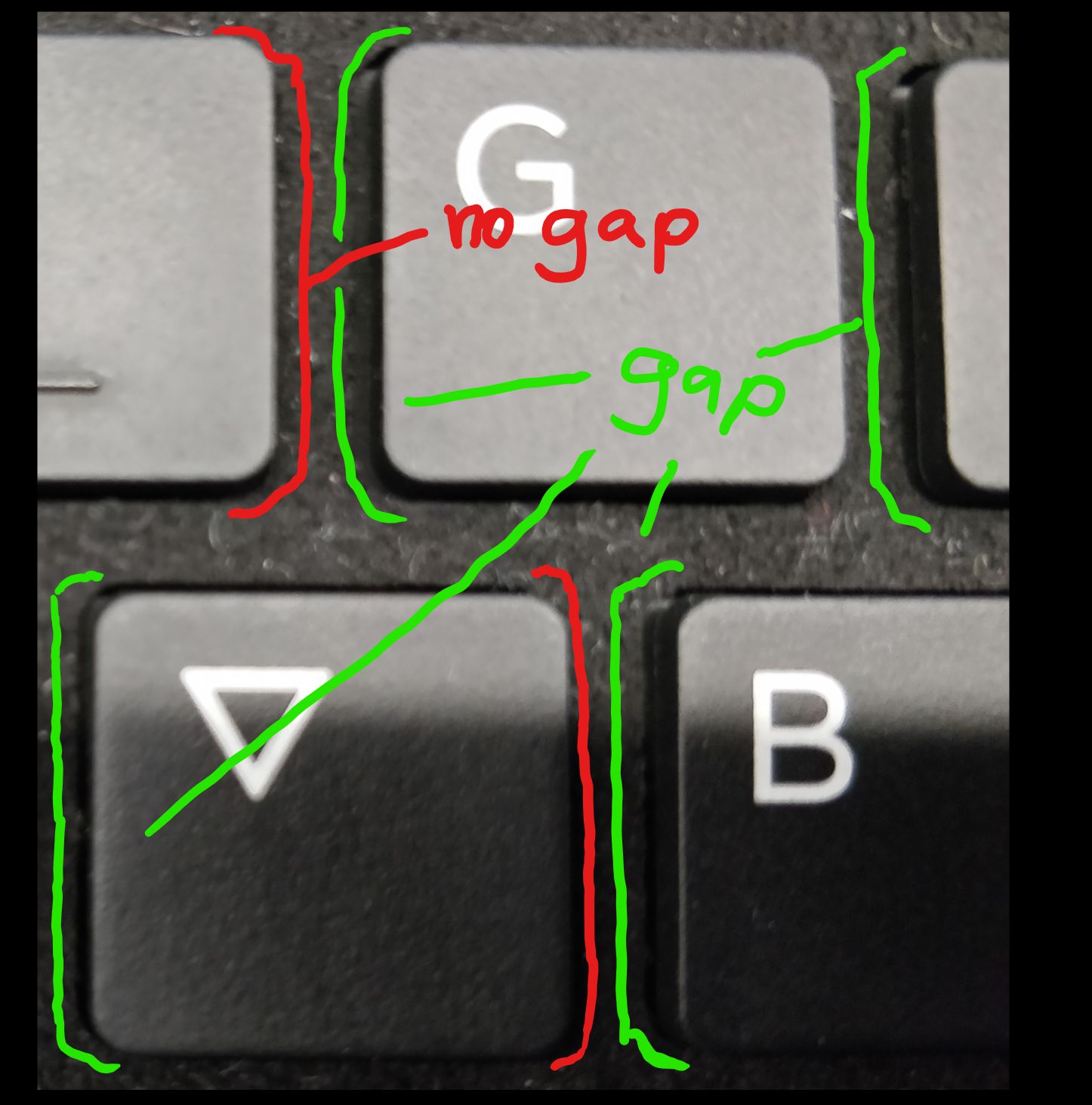 Did you note them with your v pen? Just wondering .

The gap you say you have don’t have my V yet, 2nd batch sure you saying the keys are raised higher than others? Gap from top to bottom of the key is what your sayin? Just wondering if I understood right
=^o concerned

Can someone tell me what the F9 Key (Image) is for i recon it is for taking Screenshots but it seems to be not working (or am I doing it wrong?)

f9 is indeed screenshot. But in w10, it just puts the screenshot onto the clipboard. You need to paste it into a viewer I learned. wierd.

But you can also set it up to save it to your onedrive too, I believe.

I have the same issue with the keyboard. I really like the travel, but sone keys feel sticky because there’s some friction between the side of the key and the surround - those keys also make quite a loud clicking sound. Even so, these are minor niggles for me, and so far I’ve been very impressed with the keyboard.

Before these kids started shooting their screens

I took a picture with my phone and edited it at the V with my pen.

No the height is ok, the keys a not central in this gap(housing)

The keyboard is OK and appropriate. Have so far no problems with it. For this zickt my SD card slot and does not want to recognize the card (128GB Samsung EVO Plus MB-MC128D). I will try another tomorrow.

Someone had a similar issue, and solved it by maling sure it “clicked” in to place. Sorry if you already tried that.

yes I know the “click” when it locks. He showed me the SD in the file explorer synonymous only he does not let me access this.

If I may address one of your questions? The reason it’s better to have a key combination is because a single key can easily be pressed by accident. Otherwise if you put your keyboard anywhere but a flat surface facing up, you may end up turning it on, eg. Schoolbag, back of chair in airplane/train/bus, etc.