Still happening w/ dp cable. I may have to either return this or RMA it. The DP is the more stable of the two. I can use that for far longer without issues.

Our firmware team is looking into this as well as I will contact Shadib about this as you stated you were talking to him about this issue as well.

In future posts, feel free to just edit in information instead of making a new post just for organization reasons

We will get this checked out and get back to you with more information when we have it!

Thank you. Ill just add that the issue seems to be primarily the HDMI ports. The issue is not as present on the DP. Im not sure what causes it, but the DP seems stable ATM, so im using that as the primary connection point now. Make sure you talk to him about the sharpening bug that im experiencing too. Any time i shut the monitor down or change certain settings the sharpening setting gets lost and i have to reset it again.

I have noted down your feedback along with the sharpening setting bug.

Can you tell me the max refresh rate the HDMI port supports? Does it use DSC?

Also would there be any reason this monitor wouldnt support 4k 144hz? IM also going to try to purchase a few new HDMI 2.1 cables over the next few weeks. So far the DP seems solid. Im gonna keep up with it for now and let you know how the new cables fare.

Can you tell me the max refresh rate the HDMI port supports?

It uses HDMI 2.1 standard and it supports the highest refresh rate ES07D03/ES07DC9 is capable of running: 144Hz

Does it use DSC?

No it does not. HDMI 2.1 standard is capable of running uncompressed 4K 144Hz (unlike DP 1.4, which require DSC to do so). In case of DP connection, yes DSC is supported

Also would there be any reason this monitor wouldnt support 4k 144hz?

Few things came to my mind:

Yeah its possible there is some kind of cable issue. I purchased 2 new cables (from different manufactureres) and will test the HDMI further.

But it doesnt really make sense that my GFX card would only output 4k at 120 hz only and then give me the option to output at 144hz too. Thats not really how they work.

Ive experienced this motion issue on both 120 and 144 hz, so the refresh rate doesnt seem to be the limiting factor here. Im going to continue trying my DP to see if i get the same problem over time and will try the new cables when they do come in. Ill report back here if i have anything new to add.

For now could you explain the process to RMA this monitor? How much it would cost me? Do i have to ship it back overseas? How would that process work?

But it doesnt really make sense that my GFX card would only output 4k at 120 hz only and then give me the option to output at 144hz too. Thats not really how they work.

Yeah that’s what I thought too. Do let us know how the new cables work for you.

For now could you explain the process to RMA this monitor? How much it would cost me? Do i have to ship it back overseas? How would that process work?

You will have to contact support for this. Usually you will have to ship it to regional checkpoints (depending on the country you are in). But I don’t have any details on this.

OK i have a new bug to document. At this point if the new HDMI cables dont fix the issue i was previously having im going to try to get the monitor either returned or RMAd. This thread will be primarily here for me to document the so far several bugs ive encountered while using this monitor. Its possible that some of them are my GPU, so im going to be in touch with MSI for now to see what they think and if a FW update is in order or another RMA.

The new bug happens with my MSI RTX 3080 ONLY and not on my MSI 6800xt. It happens on displayport and not the HDMI port (so far). If i reboot the monitor I either get lucky and get a bios screen splash showing up or i dont (for the most part i dont). I discovered this issue on my MSI X570 unify and while loading into the BIOS main menu I got several of the following garbled pages on screen: 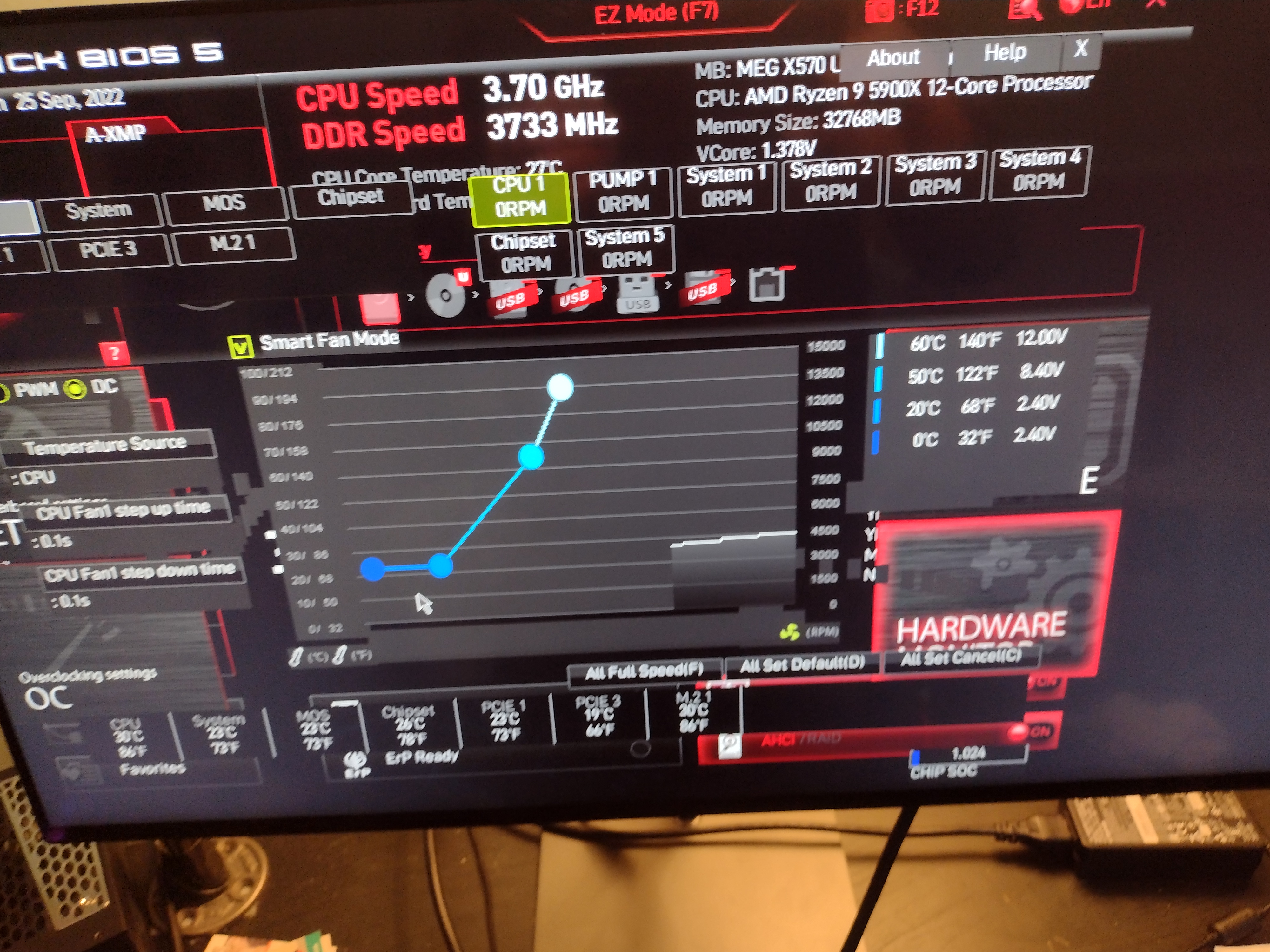 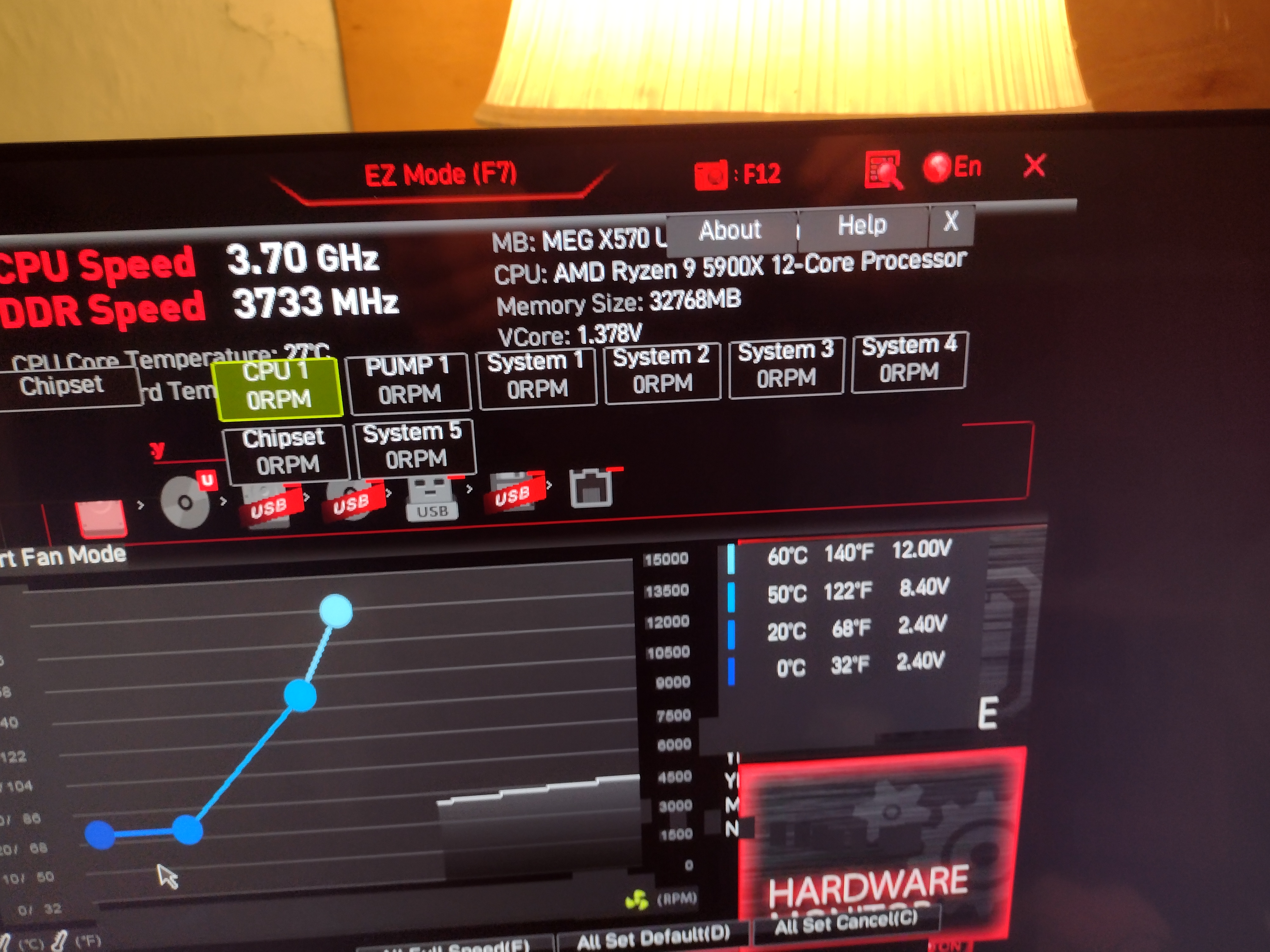 When i tried to set my fan curv i got: 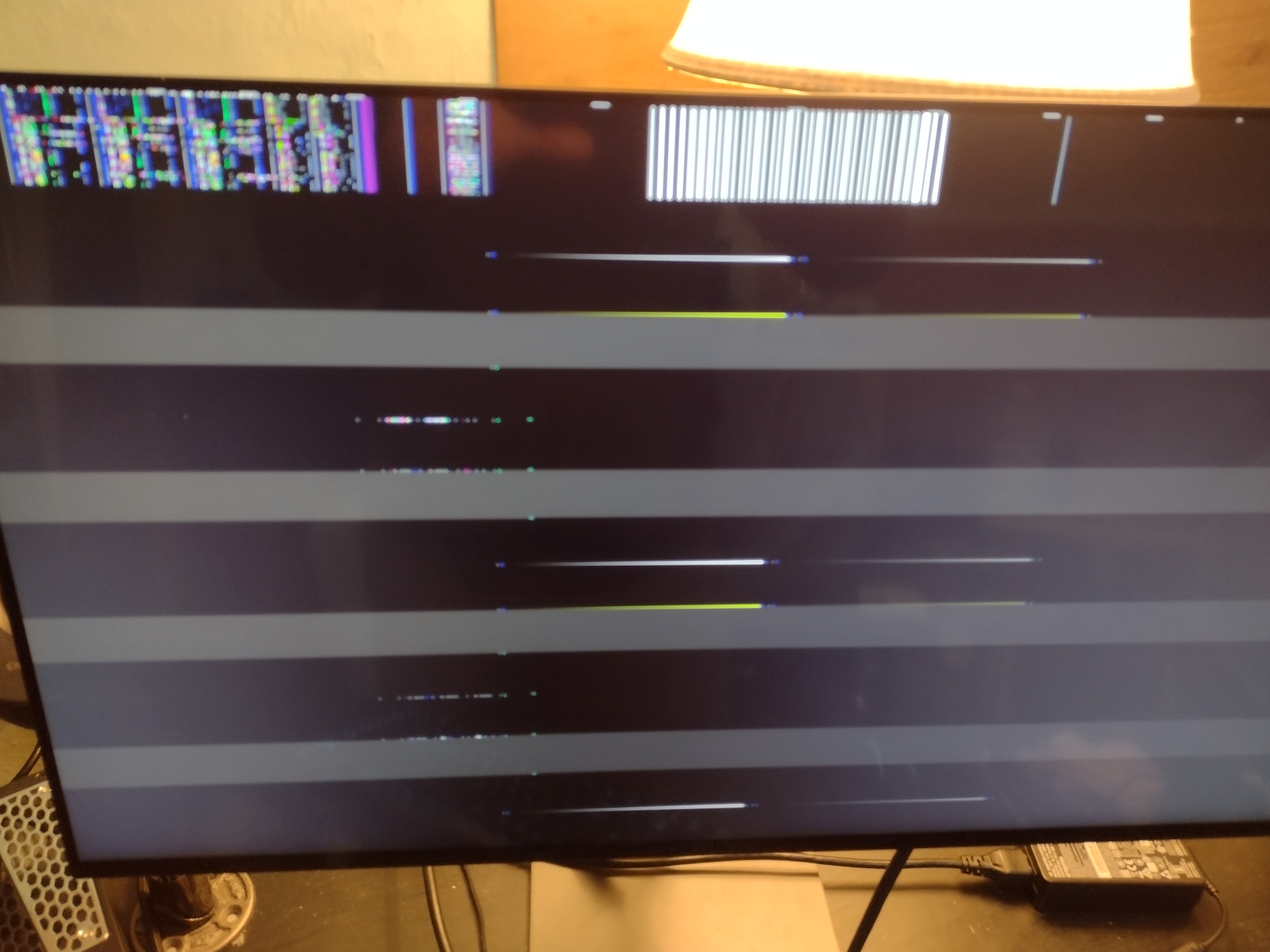 Then the screen turned into this when i let it boot past the BIOS: 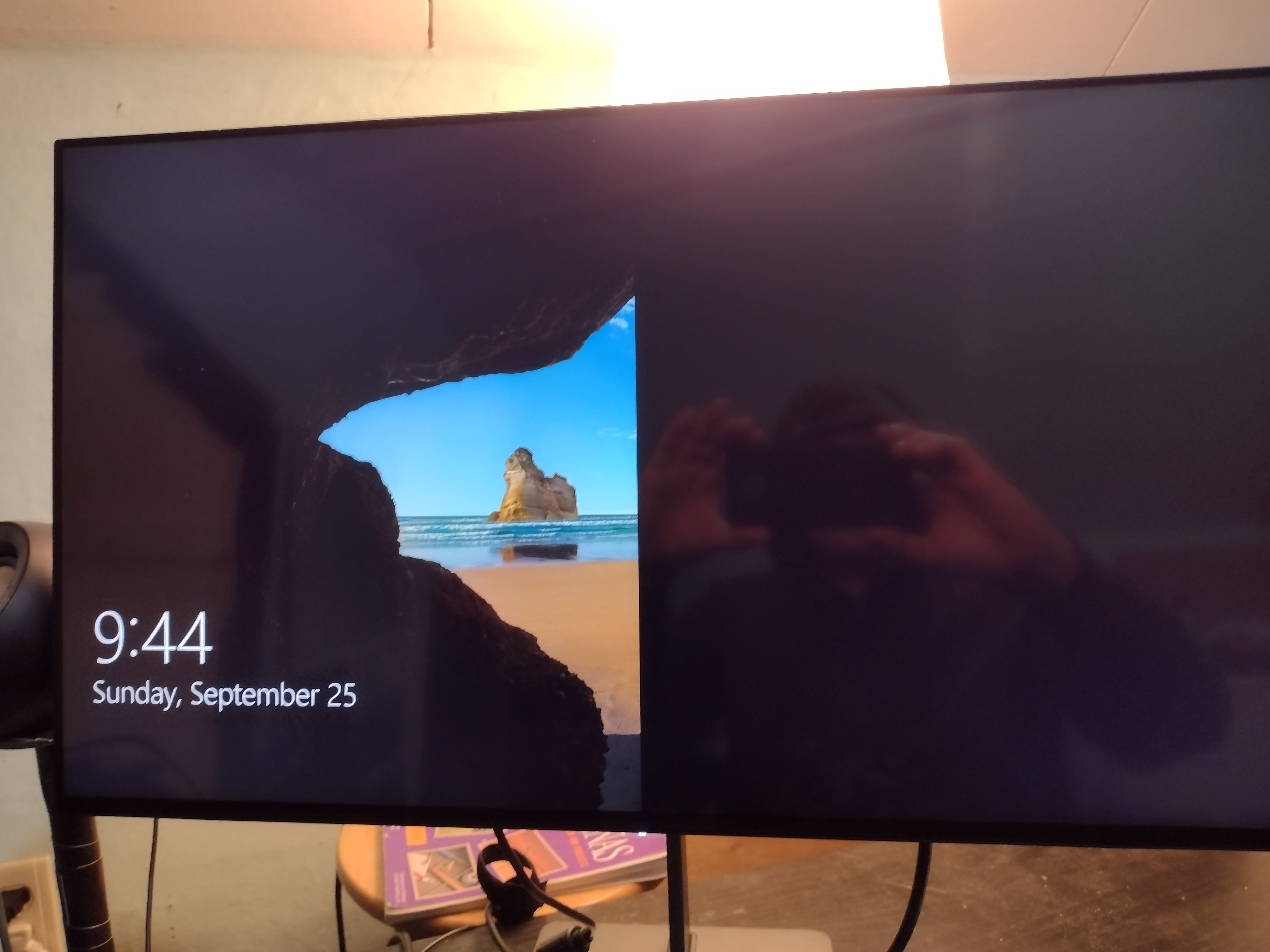 Another reboot fixes the issue and it will display the whole screen.

If i reboot the splash screen eventually shows up but its way past the time i have to enter the bios. If i press the DEL key at the moment im supposed to, either i get the garbled screen above, or i get nothing at all until i reboot and finally i get some post BIOS boot screen when its simply too late to do anything about and i am forced to continue into windows.

At which point i usually get an OK boot with the exception of the one screen you see above.

If I boot on the EVE, i get this bug. If i get the bug and hot swap the cable to another monitor, i get NO SIGNAL either if there is no signal or the bios is garbled. If i boot with another monitor and enter bios correctly, and then hot swap the cables, the EVE shows the correct bios screen with no garbled text and i can make changes, save them and exit correctly. To which i again have a very low chance of not being able to get back into bios w/o switching monitors again.

A strange issue is the monitor appears to be trying to boot into 1280x720 @ 144hz (i noted this resolution when i finally as able to boot it correctly). Any other monitor boots into bios just fine at usually either 2560x1440@60hz or 3840x2160@60 hz. Both my AOC AG241qx and my FI32U have no problem booting with the 3080 card. And strangely enough the 6800xt boots just fine at 4k 60 hz over DP with the EVE (though ill test it again in the coming week), with no garbled text at all. At some point i was even getting chinese text on some of the menu with the garbled text.

This issue DOES NOT happen on any other monitor. I own an FI32U and i do not have ANY issue booting in on displayport on the 3080 GPU.

The issue is either my monitors really really borked somehow, or the 3080 has a finicky issue with it that would come down to either an MSI firmware update or an EVE firmware update.

ILl be contacting MSI In the coming weeks to see if they think i should also be RMAing my 3080 at all.

Another bug that i think is the monitor. I will sometimes randomly get no adaptive sync enabled even if the monitor has VRR enabled. I boot into windows and dont even notice it until i find the frame rate counter in games are sticking at 144 hz and not moving. At that point i return to windows and check and find this: 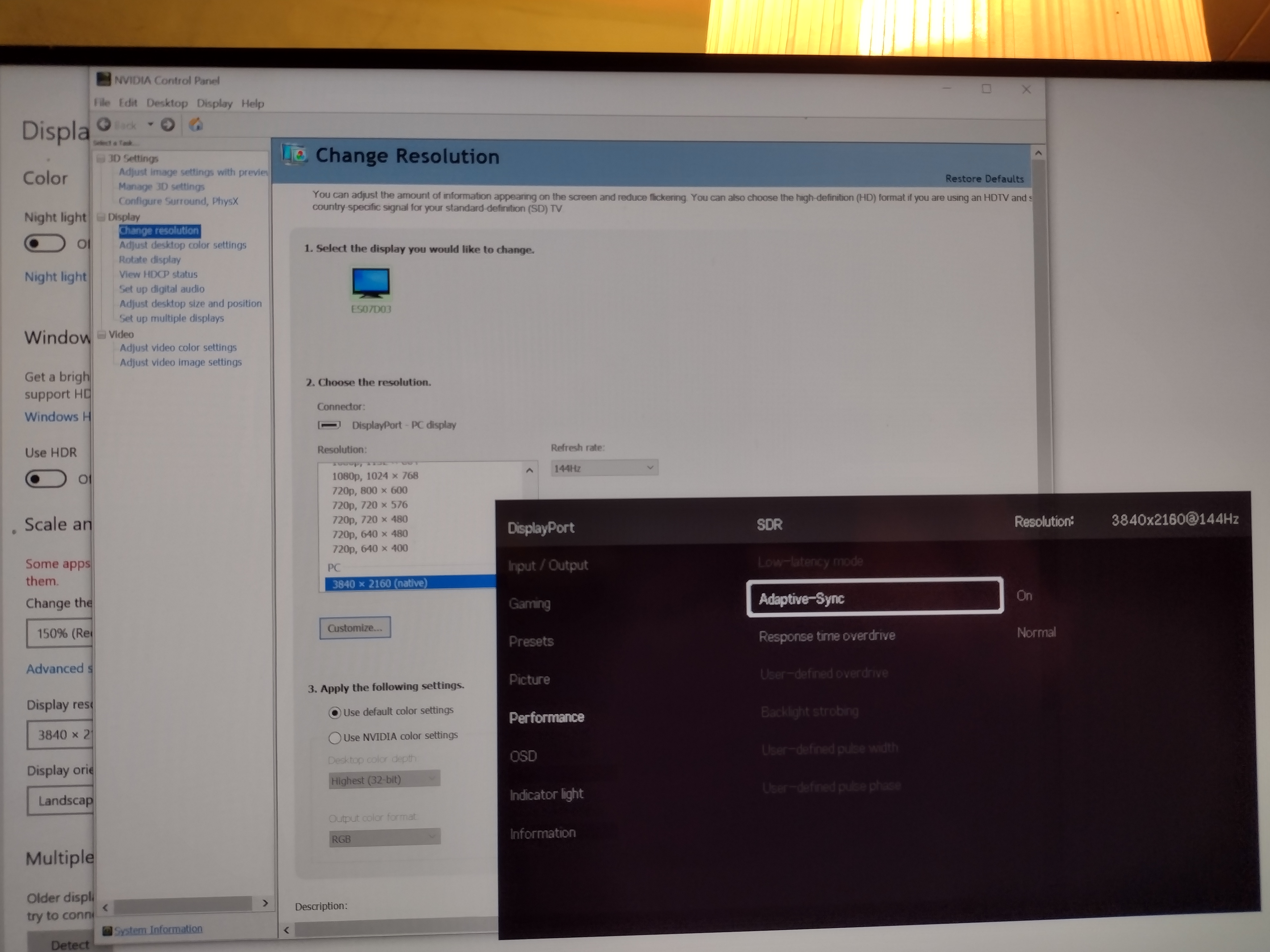 Note how the gsync menu isn’t listed but the AS is enabled in the menu.

The fix is to disable it and reenable it in the monitor menu. Then everythings ok.

So i seemed to have fixed the bios issue (at least on my gigabyte board) by enabling CSM support. Now i can boot into the bios w/o any issues and it displays at 1440p60 and not 720p144. It doesnt skip the splash screen like it did before and allows me time to hit the DEL key to load the bios settings. Does this monitor support UEFI? It seems like it sees it (at least on the DP) as a legacy device?

UPDATE: This is a NVIDIA issue. Not a monitor problem at least. For some reason you have to have legacy mode at least enabled or set to auto for the MB to allow it to boot w/ DP enabled. Not sure why that is.

This is the exact problem i was having here: https://forums.evga.com/RTX-3080-TI-FTW-ULTRA-Cant-see-BIOS-post-screen-w-DP-port-m3410892.aspx

The gsync issue is another problem that seems to persist. Ill keep trying to see if i can’t figure that one out next.

Glad to hear you got the BIOS/UEFI issue resolved! You can check to see if your BIOS mode is legacy or UEFI by going typing “system information” on the search bar for windows and look for the selection that says BIOS mode.

OK One issue then ill answer your question.

I got a new HDMI cable and it hasn’t changed the issue. The HDMI Port is entirely unusable for me, so im gonna be talking to support at this point to inquire about an RMA or return.

Thanks for your help up to now.

Just curious if you’re running multiple displays? I noticed that when I disconnected my secondary 1080p monitor a lot of my issues went away.

I have tried to do so, but this happens with a single connection regardless.