After getting your Eve Spectrum, have any of you experienced any issues?

My monitor on v102 was having flickering issues while watching Netflix and upgrading to v104 this is no longer happening but had a issue a moment ago where the screen was just black.

Would be able to navigate the menu for a few minutes but then nothing, just changed to video input changes while using the navigation button. Changed all cables on monitor and computer but nothing worked. After a few minutes of struggling and switching over to my secondary LG monitor the Spectrum started to work again.

before firmware 104 I too had screen flickering and moments of my screen turning black for a few seconds. How i fixed mine was changing my hdmi cable to a certified hdmi 2.1 cable, changing hdmi ports on my rtx 3070 card and updating nvidia drivers which stop black screen and flickering for me. Now upgrading my pc, updating to firmware 104 and to windows 11. i am no longer getting screen flicker and black screens. double check if your drivers are all up to date and use a certified hdmi 2.1 cable. if you are still having issues via hdmi. try a displayport cable.

Thanks for the reply @LoneWolf but using both hdmi 2.1 and DisplayPort cable bought from Eve’s store. All drivers updated on my computer and still on Win 10 but yeah might try another DisplayPort cable lying around if I can find one.

I’m still having this issue and it’s pretty intolerable - were you able to find a solution to the monitor flickering? I’m using DisplayPort 1.4

I had this issue for a while, turned out to be a bad batch of certified DP1.4 cables that didn’t perform. bought a new set of cables (using the same type and length for both my monitors) and the spectrum worked again. now, a few months after this issue first came up it has come back, aside from updating drivers and such (as you do) nothing has changed in my setup. but the screen blanking issue has returned. doesn’t seem to relate to the content on the screen as its happening sitting idle on the desktop, and in game. my other monitor, an old acer 2k display is fine and doesn’t blank at all. just the spectrum. this is almost certainly an issue with the monitor

man that really sucks, I’ve been trying to reach out to their support team but no luck. Switched over to HDMI and now I’m seeing more problems. 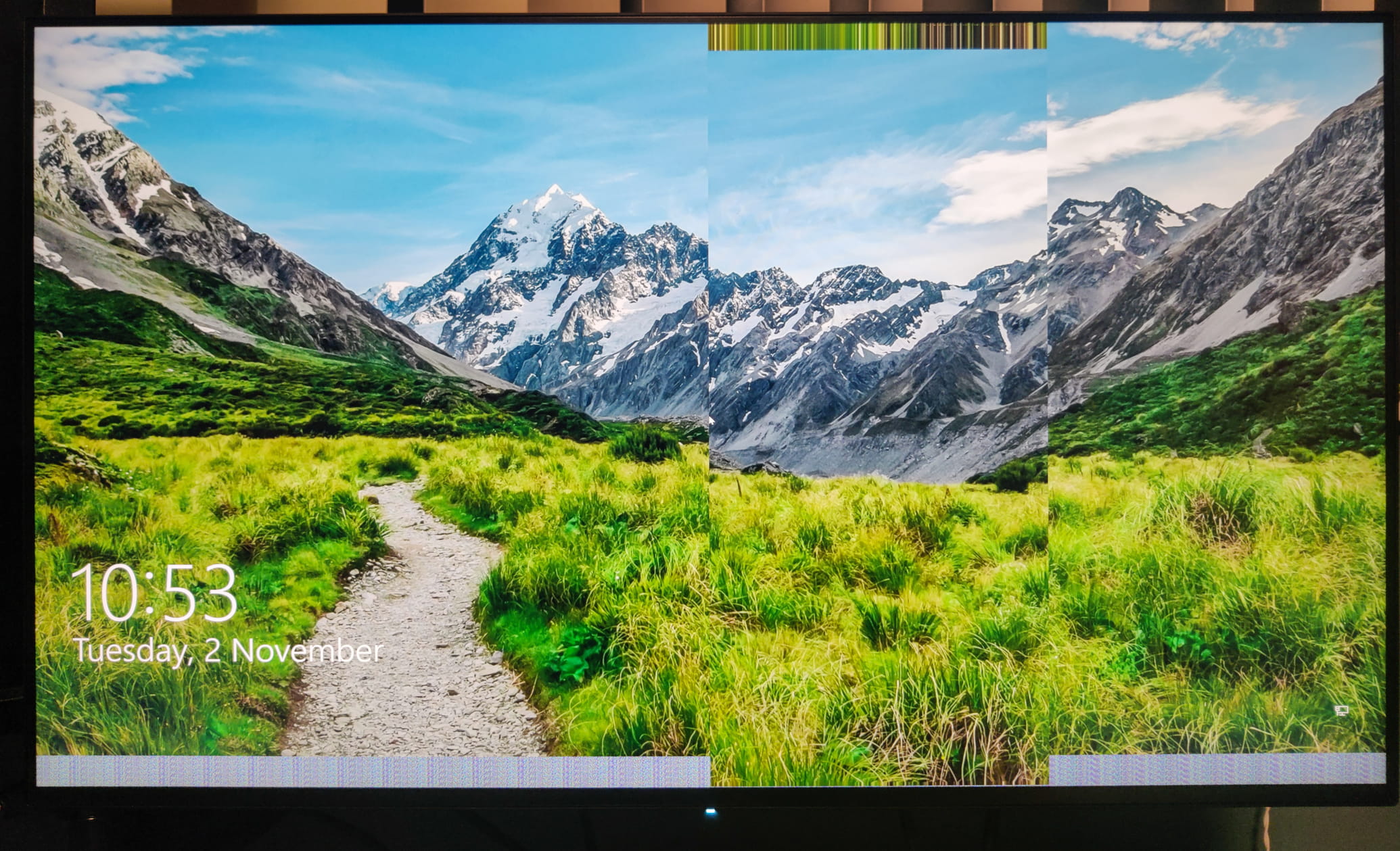 Hi,
Could you provide some more infos from your setup?

Did you use the 102 version from the forum or from the official download section?

Hi this is happening on my Razer Tomahawk Nuc,

I’ve been advise to try a factory reset, and this issue has only happened twice so far. I will give this a try next time the issue occurs.

I am also seeing some bad flickering and other issues.

I’m using the HDMI 2.1 port on my 3080 with an HDMI 2.1 certified cable. On the desktop, when set to 144Hz in Windows, the Spectrum flickers badly. When playing games the adaptive sync means the framerate is rarely ever pegged at 144Hz, and I don’t notice any issues.

My solution, for now, is to set the refresh rate in Windows to 120Hz. I’m not seeing any flickering with this setting.

The display also seems to have trouble waking from sleep sometimes. It will sometimes wake and connect, and other times wake and not connect, while the menu is also unavailable for 10 seconds or so. Other times it will connect and disconnect several times until it finally connects permanently. Yesterday it woke and parts of the screen were all jarbled. Turning it off and on resolved that for now.

Only solution I’ve found was to switch from DP to HDMI, but having the messed up screen image at times from HDMI and only way to resolve it is by powering off the monitor and turning it back on.

Went back to DisplayPort cable and screen is flickering again, hope this gets resolved.

I have noticed an issue with flickering and loss of display and black screen on 104. I notice this when I am on screens with a lot of white, for example, excel, word and windows explorer as well as this very web page. If I revert to my home page the issue goes until I return to the white page that I was on. I have tested this with a DP 2.0 and DP 1.4a and the results were the same. Does not affect gaming etc.

I have another issue which I have noticed in Halo Infinite and Battlefield 2042 where the screen will go black for a couple of seconds then return without HDR. A quick monitor reboot brings the image back with HDR enabled again (using monitor power button).

Early testing shows that this issue still persists using Outlook, excel, word and websites etc after updating the firmware to 105.

Yeah been hearing its a problem still in 105, reason I haven’t upgraded. Sorry to hear your also seeing this problem, having the same black screen issue for 1-2 seconds without HDR.

I have the same problem, also with EVE DP-cable. Bought a new certified dp 1.4 that seems to help a little, but not compeletely (also it makes other distortions to image sometimes, need to replace).

However, it seems that disabling adaptive sync from monitor settings seem to help even more. Maybe this is still firmware related…

Running currently with NVIDIA 1080ti (until able to get reasonably priced upgrade).

cool thanks for the info, I’ll give that a try. Yeah also using EVE DP-cable as well.

Sorry to hear you are having issues with the Spectrum.

This is a known issue and we are working close with the firmware team for a solution.

I’ve recently taken over the Firmware Liaison position here, and I’ve been working with the fw dev team a lot to both get more issues resolved as well as get them resolved more quickly.

That being said, this is one of the most troublesome issues that we’ve run across. One of our community members, @barron, has done an extensive writeup in this post Screen blanking after firmware 104 while gaming? - #234 by barron detailing his findings, which has also allowed us to take new data to the firmware team to look for a resolution to these issues.

I’m curious about a couple of things:

If you could give both a shot, that would give us more data to be able to present to the fw dev team to try to help them narrow down the cause of the issue.

Please give them a shot and let us know.

Just completed the NVidia driver update to 511.23 but hesitant on the spectrum v105 since lots of people are still reporting that the black screen flickering problem is still a ongoing issue. I will wait till you guys release another firmware down the road.

I also wanted to say I’m seeing a flickering problem on the PS5 I own as well, its not a black screen problem. The flicker retains the image and happens when viewing media, its very subtle but problematic as it will happens multiple times in one viewing. I do not think it happens when gaming.

Both my PC and PS5 are using your Eve cables.

@nkyadav looks like latest nvidia drivers have fixed some of the flickering issues. 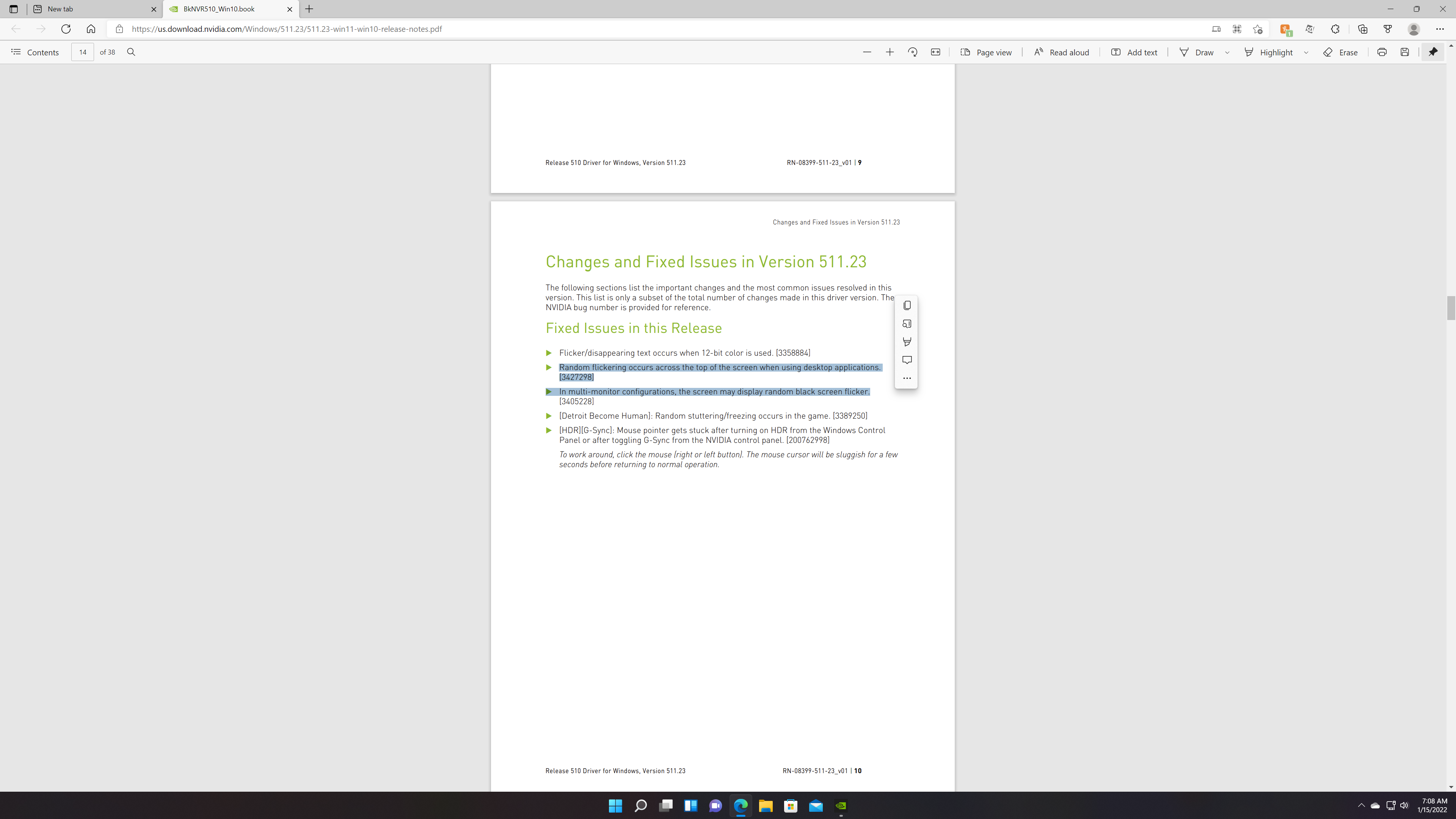