[Merged] Is OLED an excellent screen choice for the new V?

Here you can find an enthusiastic discussion about OLED panels!

We extracted the following posts from ‘New V: The hard choices’; we hope you find them easy to follow!

Will the new V have an OLED screen?

We are looking into various screen options from our suppliers. We will provide more details of our display choices for the new V once we are ready.

It’s a purely physical side effect of the way OLED technology works. The pixels in OLED display have different rated lifetimes depending on color and decrease in brightness at different wear rates. All OLED screens will eventually show signs of burn in, it’s not avoidable with current technology. Phones happen to be an excellent use case for the technology because they often display for shorter periods of times and with a very wide variety of content. That said, it’s likely your X1 has detectable degradation in the area at the top of the phone that always displays status icons. You’d never notice it in every day use, and it might not even be obvious to the eye, but it’s there. I don’t know who exactly the panel in the X1 was made by, but no production OLED panel has been able to avoid these side effects, nor Sony’s phones.

The original V was released in 2017. Considering the use case for a computer (with highly permanent display elements at the top and bottom) they would likely be showing noticeable burn in with full screen content. I have laptops 10 years old that still are perfectly functional. If they had OLED displays they’d be unusable, their brightness would be below usable even if they didn’t have uneven burn in. I have a 3007WFP monitor from 2006 that still works just fine. I expect my computer electronics to last. With MicroLED not being an option and OLED having a downside when used for desktop applications, I would recommend sticking with a less expensive panel for the V.

Respectfully, understanding things theoretically is one thing but I’ve evidenced this in person. I used to own a Samsung phone which used AMOLED and the burn in was very obvious.

The problem on the internet is that there are far too many regurgitating the same thing over and over again. In reality, the burn in is not present on my phone for which I’ve owned for 1 year. I use my mobile phone everyday at maximum brightness. Rather than dismissing my experience, it would be better to investigate and ask why the Sony Xperia 1 has no signs of burn-in issues after 1 year of use.

Now, I am not saying to take my word for it. I am merely suggesting Eve and other people to investigate this first hand. A Sony representative confirmed to me on the week of release that the Xperia 1, are not using Samsung or LG panels.

I am absolutely not denying that your Xperia 1 does not have burn in. I am merely stating reasons OLEDs aren’t traditionally considered for use in desktop applications. You’ve given a reason for using an OLED, I’ve given one against. I would be interested to know if Sony sources their small panels to outside manufacturers and how they would compare pricewise to an excellent IPS-type panel.

Did some more research and it turns out that Sony had released the Xperia 10 II which costs £319 (GBP) for the handset and it has 6" OLED display so I am assuming that it doesn’t cost a fortune to use an OLED display even at the price point of £319.

This guestimate is assuming linear price scaling by display area - which may or may not work, OLEDs are only built in certain sizes which is why you don’t see 42" OLED TVs - and I’m not sure if 12" is one of them. Anyways, you’d multiply those earlier numbers by four for the 12", you are looking at roughly $112 [OLED] and $74 [LCD] before the markup for sale, which is probably somewhat naive as I’m sure there are other cost factors at work. Not a huge delta but definitely something to consider and interesting information.

Edit - one other thing is you’d want an OLED panel with low black smear - it’s not super obvious on a phone sized screen but on a laptop (or a VR Headset) it’d definitely be noticeable.

Except for burn in, OLED display have some cool features :

The biggest drawback is and will be for the next 2-3 years, the burn-in.

Average use of a phone screen it is 4h per day, maybe if you are gaming it will be 6h per day.
TV screens have roughly the same usage time and they are not that high PPI.

Now, a tablet/monitor it is expected to be used for 10-12h which is more than double the normal OLED usage. Additionally, the content (except the taskbar that you can mandatory hide despite that I hate it) would be the same for an average of 50% of the time.
This would create burn-in effects in whatever manufacturer you choose to use.

To put some number down:
The TV that is low PPI has an experimental 4000hours burn in risk. 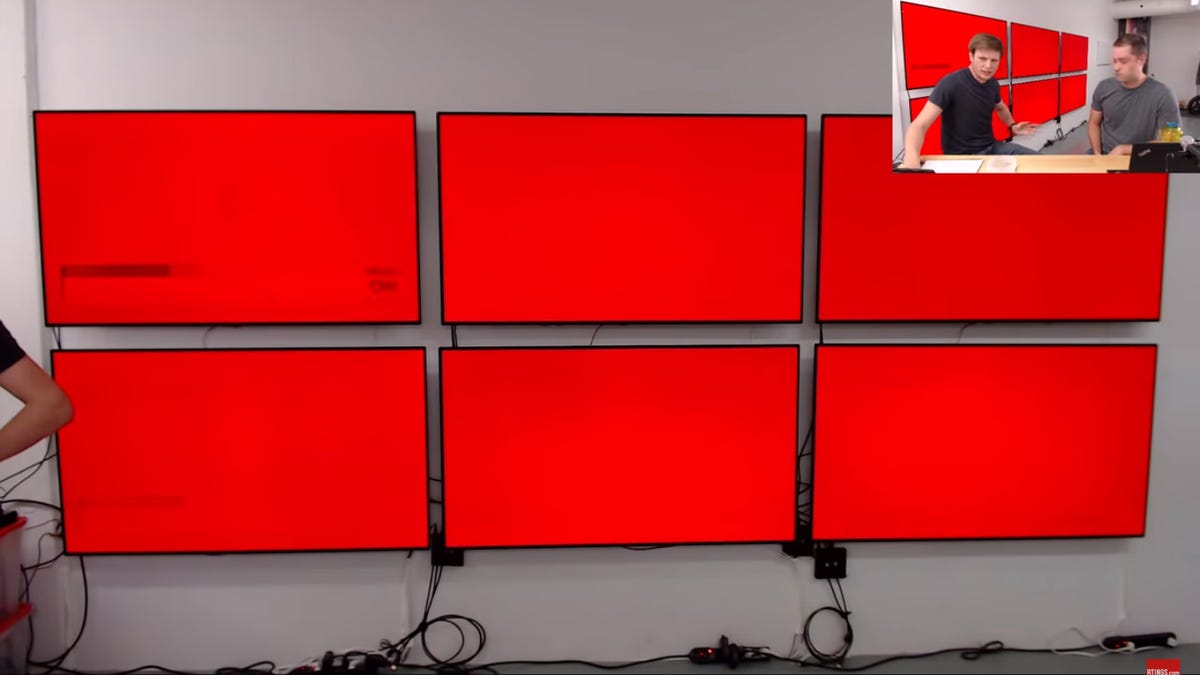 A months-long OLED TV burn-in test on LG models show that after 4,000 hours, logos and static images were vulnerable to permanent image retention, much less than the South Korea electronic company's assertion of 30,000 hours.

I don’t know about you, but I do not want to change my laptop every 3 years because the screen is burned. 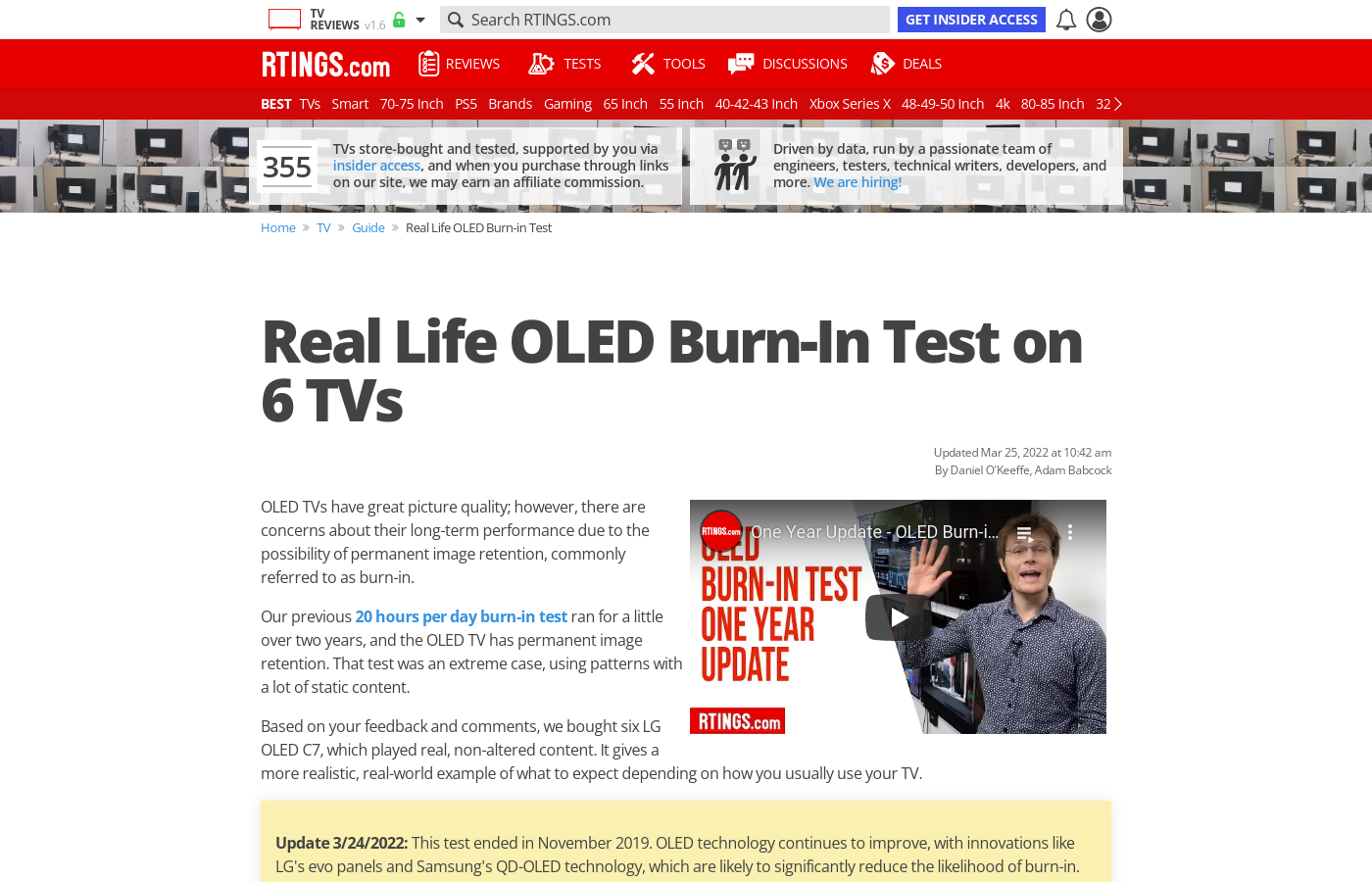 There are concerns about OLED long-term performance due to the possibility of burn-in. We bought 6 LG OLED C7 to play real, non-altered content. It should give you a better idea of what to expect depending on what you watch on your TV.

“To see how the results at this 5000 hour point compares to your usage, divide 5000 by the number of hours you watch each type of content per day to find the number of days. For example, someone who plays call of duty or another video game without bright static areas for 2 hours per day may expect similar results after about 2500 days of usage. This corresponds to about 7 years.”

This is the most sensible answer and test conducted by the reputable RTINGS.
Let the community vote on what they want to see in the product IPS or OLED.

I totally agree on that but, they must have in mind that TV have less density which affects burn in hours.

It is a good practice to have some numbers on your poll to explain the pros and the cons.

I really like the idea of OLED but we have to be 100% sure that the screens will be fine after at least 3 years of normal use (8h per day).

I agree we should have some sort of numbers however, not everyone uses their tablet for a whopping 8 hours per day. Additionally everyone’s use cases would be different so I am not so sure it would be a good idea to mandate the 8 hours per day from the get go without conducting any poll.

For example, I only spend approx 2 - 4 hours per day on my tablet at most therefore, the V could represent a better investment for me than it does for others. Therefore, it is impossible to ensure that the screen will be fine for 2-3 years of use for everyone.

There needs to be multiple polls posing questions such as:

I agree on the fact that not all people use their tablets for 8h per week but when you manufacture a product you must be sure that the product will not have a problem for at least 1.5x the offered warranty under normal usage. At least if you care about your reputation…

“When you manufacture a product you must be sure that the product will not have a problem for at least 1.5x the offered warranty under normal usage.”

This is a very dangerous area for any brand to determine and define ‘normal usage’. Rather than giving a blanket statement of “requires 1.5x the offered warranty under normal usage”, wouldn’t it be better for Eve to extensively test these displays in-house in order to better protect their customer’s investments?

In doing so, Eve would be providing both their customers and the market something different and unique. Are there any other tablets out there that extensively test their products to better protect customers investment?

Now if that means ditching OLED in favour of IPS then fair enough.

Below are the various types of IPS panels on the market.

These below were all developed by Hitachi

Super-IPS (S-IPS) - 1998 has all the benefits of IPS technology with the addition of improved pixel refresh timing.

Advanced Super-IPS (AS-IPS) - 2002 Improves substantially on the contrast ratio of traditional S-IPS panels to the point where they are second only to some S-PVAs.

These below were all developed by LG

I didn’t originally know this, but IPS is actually a trademark, so Samsung PLS panels and AU Optronics AHVA panels (despite the VA at the end) are also IPS-type panels. There are some small differences, but nothing that would prevent you from including them in an IPS panel lineup. Threw me for a loop a few years back because I though they were a form of VA panel.

What about two layer IPS? Can improve blacks a lot, while not having problems with burn in, wish eve spectrum also has this feature.

I think the point of an OLED is for the brightness mostly, the thickness and the power consumption…

Having double IPS, I think will not improve any of those areas…

I would love for the next V to have an OLED screen since I’ve been waiting for OLED to come to desktop for a while now.
There have been some OLED monitors released now but with a huge markup in price and I don’t think burn-in is the reason for that rather than marketability and the tooling that already exists for phone and TV screens and yields.
If the team is going down the route for an OLED I would help they conduct sufficient research and in-house testing since an one OLED isn’t necessarily like another.
There exist more ways to combat the OLED burn-in issue than has already been stated (like the sub-pixel movement).
For example:

Also it highly depends on each owns usage, like if one uses stationary monitors or always the built-in display, the duration, what content is displayed, etc. There may be options offered for OLED and LCD or at least customer replaceable screens in the case the OLED display becomes unusable (burn-in, pixel defects, etc.)
I hope these are points that could help bringing OLED to this tablet. I’ll certainly am glad there are like-minded people and hope the team being V can realize this ambition.

not actually, OLED is very expensive, it need to consider.