Kickstand Attachment for Comfortable Lap-top Use

Possibly my biggest concern with replacing my laptop with an Eve (or any tablet / 2in1) is the comfort/stability of using it on my lap or any uneven surface. To that end I have been dreaming up some sort of attachment that would give it additional rigidity for such scenarios.

Given an extendable element, it could probably slide closed in such a way that it’s length and width would be the same as the Eve and therefore could be stored in the normal Eve sleeve (or similar).

It could be designed to fit multiple Tablets and would be sufficiently light so as not to ruin the weight advantage the Eve + Keyboard would have over a conventional laptop.

Before I sketch this up… does anyone have any thoughts or have you seen anything similar?

I can’t say I’ve seen anything like it, but could it be designed as a sort of cover, so the V would fit in this lightweight attachment when not in use? Just a thought, although I’m not sure how feasible it would be. A folio case, depending on its design, might also fill this need.

What you’re referring to is a folio cover:

But I have to say that I used a Surface 2 for quite some time and I find it very lapable even though it has just two kickstand angles. But that’s just personal taste, of course.

Well… here’s a suggestion: why don’t u 3d print a “plat base” that sits imbetween the keyboad and the V. Or you could just put the laptop sleve on ur lap and then use the V ontop.

Hmmm… I guess it could be a kind-of extension to a folio cover as the cover (like the one you linked to) provides no means of attachment to the keyboard. (I don’t know how important this would be when in use)…
… but for me the cover (and the protection it provides) is not necessary and adds weight/bulk.
I’m kinda thinking of something thin that could just be used as required rather than being permanently attached. After-all… the whole lot should be readily detachable for tablet-style use.
I take your point about the ‘lapableness’ of similar devices… I guess time will tell.

@tld8102… If I had a 3D Printer I’d make all sorts!.. but I’m not quite sure what you mean by something that would sit between the keyboard and the V. Maybe you mean something to maintain the angle between the two in a rigid way to provide more stability…? I have seen some of these… and they only hold on to the bottom c.5cm’s of the tablet… but they look quite bulky.

This is the first and very reason why I first refrained to buy a Surface!!! I bought another 1 in 2 with an only capacitive touchscreen so I was (even though I knew it beforehand…) kind of disappointed… then bought a Surface, (pro 4), now, I am using both of them, the other 1 in 2 and the Surface alternately because of the not sturdy way the Surface sits in my lap. When painting, I use the Surface and the keyboard only when I type a lot inbetween (like chatting).

What you are suggesting seems to be a light & thin metal aluminum board with sliding parts like having rails on each end or sth like that…? I would suggest it would be ALSO possible to leave it attached when you carry it around from desk to desk…

unimportant ps: I did not buy the microsoft keyboard, I bought a much cheaper but satisfying keyboard later, which is Bluetooth and backlights like the one which comes with the V ;)…

Hi @adt… yes, that’s what I’m describing.
I appreciate that it wouldn’t be for everyone.

I’ve searched the forum and found mentions of but no actual technical drawings of the V. I’m about to start designing ideas for this Kickstand Tray thing. Are then any ‘publically’ available (preferably Sketchup) files of the V with attached keyboard?

I was thinking of using the Eve sleeve as the base to ‘extend’ my lap providing it was stiff enough.

Place a piece of cardboard inside the sleeve or thin hard plastic sheet and you have a simple cheap solution.

I have used a magazine or book for this purpose in the past.

D@mn, Eve, you made this thing hard to draw!
So here’s the base model on to which I can hopefully add my idea…

Ok, well this is the tray. It could sit flat against the back of the keyboard when in the sleeve.

The upper two strips would slide out of the tray on legs.

The areas highlighted green would be magnetic and, when in use, would attach to…

I’ll try to knock up additional pictures to bore you all with later.

… and with the tray under/attached to the Eve…

Now, if only I had a 3D Metal Printer!

These are nice drawings, but I doubt that this will work. There are weight issues if you push the V so far to your knees to write comfortably on the keyboard. You have to implement lead into the front part of the folio to avoid flipping over and falling down…
The center of gravity is anywhere between the Kickstand and the lower part of the V. The angle of the V has to be more flat to have a 90° view angle to the display when sitting. The gravity point moves farther away from you and to avoid falling down you have to move the device closer to you. But then writing on the keyboard becomes uncomfortable…

Hi dibadibadu and thank you very much for taking the time to reply… especially valuable as it sounds like you actually have an Eve (prototype presumably) so you know what you’re talking about.

Unfortunately, I can’t follow your logic. If you have the time, would you be able to rephrase so that I get it?

I don’t know if you read the whole post but are you aware this is just a bolt-on to the Eve… ie, it’s not a full folio case… the kickstand is the original kickstand that’s already attached to the Eve. To that end, any angles/positions are those that are already achievable with the V. Because of this, there should be no change in the balance characteristics of the device and I assume (wrongly perhaps) that it will stand happily at any angle ‘out of the box’…?

For what it’s worth, having now designed/drawn it… I’m not sure it will work either… but more for reasons of cost/complexity than anything else.

What he means to say (I believe) is that for any 2-in-1, and by that it includes the V, the weight distribution is very different from a laptop. In a laptop, most weight is in the base underneath the keyboard. (Additionally, in a laptop you have a different mechanism how the screen part is connected.) Here pretty much all weight is in the tablet part (the V keyboard is heavier than competitor’s due to the contained battery).

Based on that, the center of gravity is over your knees, not over your legs. Pushing it further or without additional weight closer to you will make it tip over based on simple physics.

On your last picture, pretty much all weight is on the right side of the slim line. If this line symbolizes your knees it should make it clear that it is not possible without additional weight left of the line.

Ahhhhh, sorry, right, yes, I get it now. If that’s what you meant @dibadibadu, I understand fully and, if you positioned it that far forward (with the bottom of the kickstand on your knees) I totally see how it could be likely to topple… even when using the ‘Lapable Tray’ (though the tray would help to some extent as it allows the (albeit small) weight of the keyboard to have a positive effect on balancing the device forward).

Coming from the more lazy disposition (where I tend to have my legs stretched out supported by a foot-stool or similar) I wasn’t thinking about it from a true sitting-position perspective. I was also considering how well it would behave on general uneven surfaces… ie, beside you on a couch/cushion etc. Maybe my use case is a bit specific/unusual.

Yes exialpho was right. It’s always hard for me to describe those things because my english is not engineering-proof… 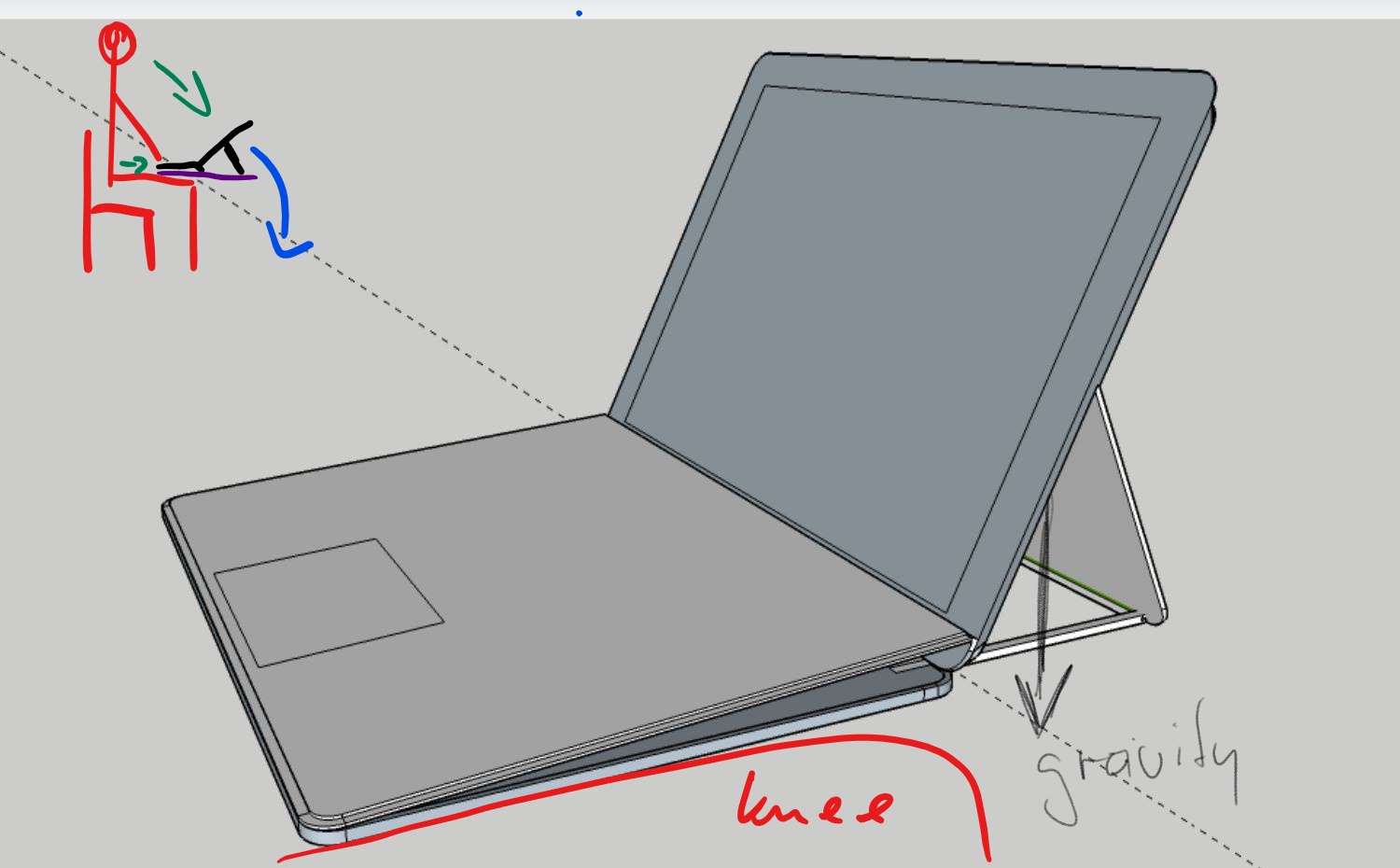 Ha! Great picture @dibadibadu
I’ll have to try a basic tray (possibly including some tape or something) with a real V (instead of the Surface Pro 1 someone leant me) in order to see how the knee-effect would affect the idea.
I’ll also maybe post the pictures on some Surface Pro forums to see what opinions Surface lovers might have.

Hey @Dario… after what you said in your ‘Hello, Dario here!’ topic I wondered if you’d seen this one of mine? Any comments gratefully received.