hey there,
call me nerd, pedant, nitpicker, I don’t care, but I need to know the exact hex numbers of the keyboard backlight so I can match it to the windows accent color.
Yeah, first world problems, but I am shure that there are more out there desperatly trying to find the fitting color.

Well all the colours are cool colours.

If I remember correctly (it’s been a while since I was hyped and drooling over the V, and I am one of the unfortunate many who still doesn’t have one), the keyboard has 8 RGB colours (anyone who owns a V, feel free to correct me).
This means that they are using 1 bit per colour channel (either off or on), so each RGB channel can either be 0 or 255 (0 to FF) on a standard 8-bit colour system.

So keyboard colours should be:

Hope this helps a wonderfully co-ordinated colour theme for you :3

Impressive, but please give some “how to apply” hints for us dummies

Colours on screens and stuff use a combination of red, green, and blue (RGB) light, mirroring the red green and blue receptors in the human eye. When they’re all off, you get black. All on, you get white. Most of the time, you will have 8-bit colour, where the brightness of each colour channel is set to an 8-digit binary number, allowing for 256 brightnesses or intensities for each channel of R, G, and B. You’ve probably seen this when playing around with colours on a computer, where you can set the red green and blue channels to different values between 0 and 255. The number for the red channel controls how red the colour is, and so on for green and blue. The more one of these numbers is larger than the others, the more the final colour is like that channel with the large value (so small value for green and blue, but big value for red will give a very red colour). The more similar the values are, the more pale the colour is. The bigger the numbers, the brighter.

(getting closer to explaining hex colours, bare with me)

There are a few different ways to represent the colours, typically using decimal (base 10, the number system we’re all familiar with, with the digits resetting back to 0 after getting to 9, and the next digit increasing). This is usually done by either having red = [a number], green = [a number], blue = [a number], where the number corresponds to the intensity or brightness of that channel. Sometimes it’s just done using R G and B, sometimes with a colon ( : ) rather than an equals sign ( = ). Sometimes the channel labels are omitted, and you just get a list of the intensities of each channel inside brackets, such as (200, 100, 225) which would be quite a bit of red (200), a bit of green (100) and a bit extra blue (225), resulting in an unsaturated violet.

Now, I’m sure you’re thinking
“hang on, we only have 10 numbers (0-9), how can we have a number system where each digit can go up to 15 before resetting to zero and incrementing the next digit?”
and
“What are with those F’s in the codes. Aren’t they supposed to be numbers? ‘F’ isn’t a number”

Red, Green, and Blue can mix to make any colour, all that matters is the proportions.
Good things to keep in mind is that the bigger the values, the brighter or lighter the colour.
The more similar the 3 channel values, the paler the colour (if they’re the same, you get grey, black, or white).
Conversely, the more different they are, the more saturated or vibrant the colour.
Red + Green = Yellow
Green + Blue = Cyan
Blue + Red = Magenta
Red + Green + Blue = White

Ignoring dimming the keyboard (which will universally reduce every channel value by a constant factor, so half brightness means halving the brightness of every channel) the V keyboard basically has each channel being on or off, so the value will either be 0 (00, off) or 255 (FF, fully on). Just add a 00 if the channel is off, and an FF if the channel is on to get the hex code of the keyboard colour.
So if for some reason you chose yellow backlight, that would require the red channel to be on (FF), the green channel to be on (FF), and the blue channel to be off (00). Putting it all together, RGB-wise, gets you the hex code FF-FF-00 or as the computer prefers, FFFF00.

Well, that became a giant wall of text with excessive detail.

RRGGBB. Just remember each channel gets a 2-digit hex number from 00 to FF, and they’re listed RGB-wise, and you shan’t go wrong

Well, that became a giant wall of text with excessive detail.

Glad I could help

And thanks for the likes

He got one more from me

And now the basic “we are dummies” question: “Where do we enter these codes”

I know where to put colours into Photoshop, Paint, and Google, but not sure about Windows Colour theme

I will investigate. I do like some RGB colour coordination n.n

Personalise → Colours (on the right) → Custom Colours (below the Windows colours)
This will open the colour dialogue, giving you the typical colour selection box and slider for hue, saturation and brightness.
Then click the “More” option which expands the colour value selector. You can enter each channel intensity individually in decimal, or enter the hex code after # in the box immediately under the “more” button you just pressed. 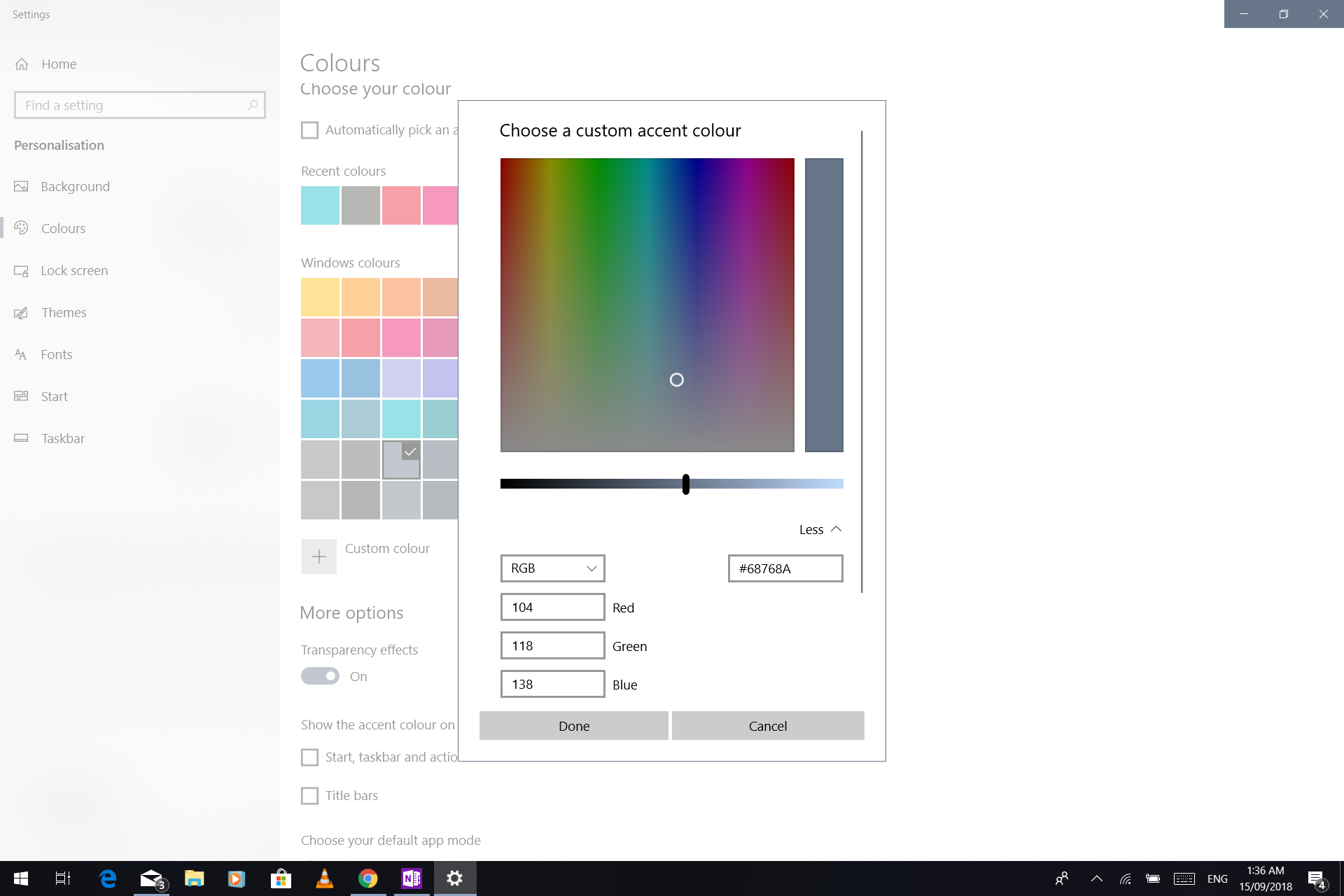 Though it doesn’t like all colours, so you may need to tone down the saturation a bit rather than the pure colour of your keyboard (like a blue keyboard with blue-grey rather then pure blue theme)

.
Thank you for all this work, it is really appreciated

I’m all about sharing the knowledge

And I’ve been lurking on this forum for a while, so I figure I should contribute

It’s a great place, and I don’t want it to fade away and die, or become completely toxic because the production side of Eve suffered some major obstacles.