Getting ready for the new V

Man, its hard waiting for my V to arrive as I am a LEB and I hope it will arrive soon.

I am already ready for the V as I have reconfigure my desk for it. It seem like the V is like a new born baby and I am already getting it all ready for it.

I am almost ready though, got my 2 new 27in 4k monitors, hooked up to monitor arms, and a new Mantiz MZ-02 Venus EGPU with thunderbolt charging, USB and Gig network, and also an extra Sata connection internally.

If you want to know about the EGPU, check it out here https://mymantiz.com/collections/shop/products/mz-02-venus. I can’t say it will work as I don’t have the V, but once I do get it, I can let you all know.

I am still missing my Video card, but still deciding on what to get as I do not know which Video card would be good with the V. I am thinking about AMD RX 580 series, or Nvidia 1070. I think the 1080 are too expensive and may not be worth it. Can anyone who has the V and an EGPU give some guidance on what seems to be the middle ground.

I have the same egpu. Don’t a card for it yet. Waiting till the last minute for a deal. I’ll probably go with a rx 570. The 580 would probably bottleneck hard

I didn’t think the RX 580 would bottleneck the thunderbolt port, but I am unsure about it. I am just hoping that it can handle the 2 4k monitor I got with some casual gaming.

The cpu won’t be able to feed the card fast enough. You can get a better idea how it would run. Check out www.egpu.io and look around there. It helped me a lot to better understand

Thanks, didn’t think about the CPU not being fast enough, I was thinking that the GPU should be faster so to limit the amount of lag/degradation (may have use wrong term) that may happen.

You’ve gotta have a balance between processor and graphics card, beefing up one without the other is just a waste of money.

I think the better thing to do would be to get a mid-grade graphics card, like the GTX 1050ti or 1060. You won’t be able to play games on max graphics, but it’s a solid card that should complement the processor in the V quite well, while still being at a good price point.

Pretty much, I just lean towards Nvidia usually. Something around that
price point would be ideal I think for the V, brand doesn’t matter much.

https://screenshots.firefox.com/XSFNJrBjki6TyHdO/null Here you go: ran the in-game benchmark in For Honor. Its the most recent title i have lol. i7 V XG Station 2, Strix 1070 OC 8GB game loaded on external SSD connected by USB 3.0 Output to 3440x1440 monitor edit: i’ve installed the 3Dmark demo, running timespy - i figure that’d be a decent comparison point. Beyond that, let me know if there’s anything specific i can try.

Still pretty good benchmark even with the bottleneck. Running the game at native resolution. Running at a lower resolution and settings would do the performance quite well

This Notebookcheck.net article gives some indications what kind of eGPU setup is suitable for the V. 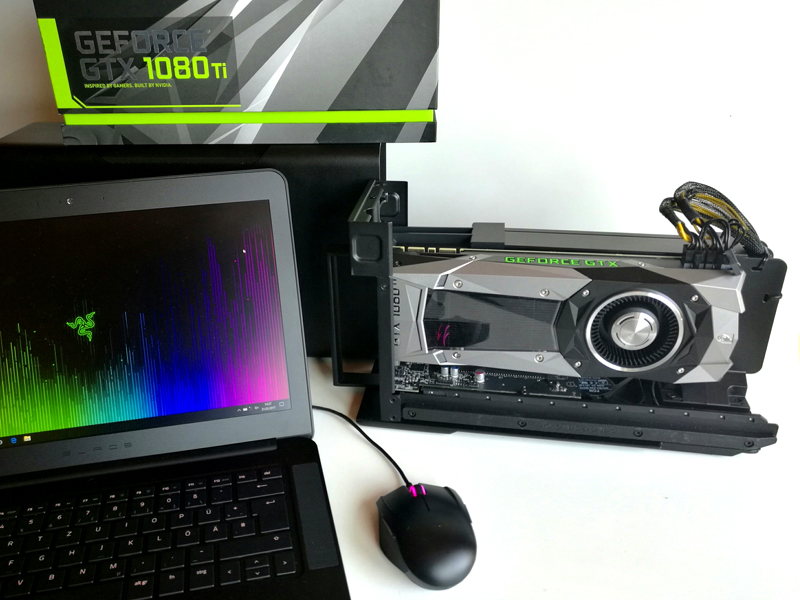 Razer Core Benchmarks, Analysis, and Compatibility: Is it Worth it?

We review the external GPU dock Razer Core, equipped with the latest desktop graphics cards from Nvidia, like the GTX 1080 Ti, in combination with the gaming laptop Razer Blade. We check how much performance the Blade can get out of the Core – and...

Personally I would prefer nVidia GTX 1050Ti as this setup can be quite small in size. But you have already an eGPU enclosure, so nVidia GTX 1060 / AMD Radeon RX570 is probably a good match.