First return progressive experience of my V i7 1TB

This is my first comeback after receiving my V (I plan to do more on topics like Zbrush and drawing)
I received it on 02/03/2018 and since that day I did a lot of testing. I also specify that it is the model i7 1T (ssd PM981) 16go

I am part of 10% who had to wait for an additional delay. I think 4Px is not trustworthy. On this point I am very disappointed because it has been a lot of waiting every week. I do not blame the people of Eve, but I think that on this subject he will have to find a reliable partner.

I am very satisfied with the packaging. As many who have already said, it came in a box that had a bag inflated, which had a white packaging and the box of the V. Finally the box of the V and very well arranged and protects the product. I had the right to all my accessories, except for my additional charger or he had to have an adapter for the country of destination (in my case France) and this is not the case. At the moment I am waiting for the response from the support (support contacted on 02/03/2018) I received the 04/03/2017 telling me that this is sold separately, out during the campaign and backerkit several of we had asked if the extra chargers came with the country adapter, the answer had been yes (@Konstantinos) . The support kindly told me to buy an adapter in France, which is not possible because we do not have an adapter that closes like the charger received. We have only adapters that are often of poor quality. So I sent back a message and wait for a return on this subject. This point makes me a little upset because it’s pretty stupid to sell an extra charger that can not be connected. For the TB3 cable I was expecting a 40Gps cable, it is only 20Gps strange.

The parent tablet is very good. Only point annoying the bottom edge back which is rather sharp. Which means that when you have in hand the tablet it hurts a bit in the long run. The charger and fine too, and I can load either on usb ports c. USB connectivity is good, I think there has been a correction after the return of the first Backers. Which proves that you listen to what you say. Like many I hear the hissing noise when charging (however it is not permanently, it is during operation (example backup))

The screen and whaou. On him nothing more to say, I find it perfect, the calibration and top, and I looked at many of the pictures that I took it out very well. I even want to say that I prefer this screen to what I had on my mac.
For the tactile aspect, it responds well, not found for the moment of problem on the subject.

I did a quick first test with the stylus. It works pretty well, there is the problem of rejection of the palm that causes problems, but just have a glove suitable for this situation and you no longer see any problems (I use this glove http: // Mazo Black V2 Pro — DokiWear). The digitizer when we designate slowly makes the jitter, which is annoying. Hopefully there is a software enhancement or pen firmware.
I also tested the stylus from the last pro surface on it, no big difference between the two. But the test was so fast.
In writing it worked without difficulty or slowness or missed.
I plan to deepen my tests with ZBrush and drawing.

In bind mode, you just have to be careful when you clip it so that the pin is well connected. Otherwise it works perfectly, I love the capture and noise and very good.
The backlighting and largely sufficient for a keyboard of 2 in 1 it allows in the dim light to see the letters of the keys.
In Bluetooth mode the sync between the tablet and the keyboard goes without worries, no problem of key for the moment, namely that I typed half of this return with the keyboard in Bluetooth.

The touchpad meanwhile is very nice enough to my taste for the size of the machine. There is just the position for cliques that can be a bit confusing especially when we come from Apple.

Ssd samsung PM98 & is very good, autonomy level it is very well placed. After that I hope that the eve team will update the firmware when it will be necessary (when samsung publishes optimization or correction)

So I just want to say that it will have been better not to have any. Quality and so bad that you can not do anything. Noise galore regardless of the light conditions. It will have been better not to put some. I know that the choice of the community was to have a basic camera. But from there to put something totally unworkable and therefore that will serve no one so much not put.

The battery meanwhile at the moment makes me a day but with only about 6 hours of various activities (netflix, surf, a little test zbrush, word). To see on the longer term.
I noticed when doing the following command :
Powercfg /energy
I have 3 errors in the report:

I think the @Team should look at that. (I enclose my report file in French sorry)
I think there are problems to settle on the subject to gain autonomy. 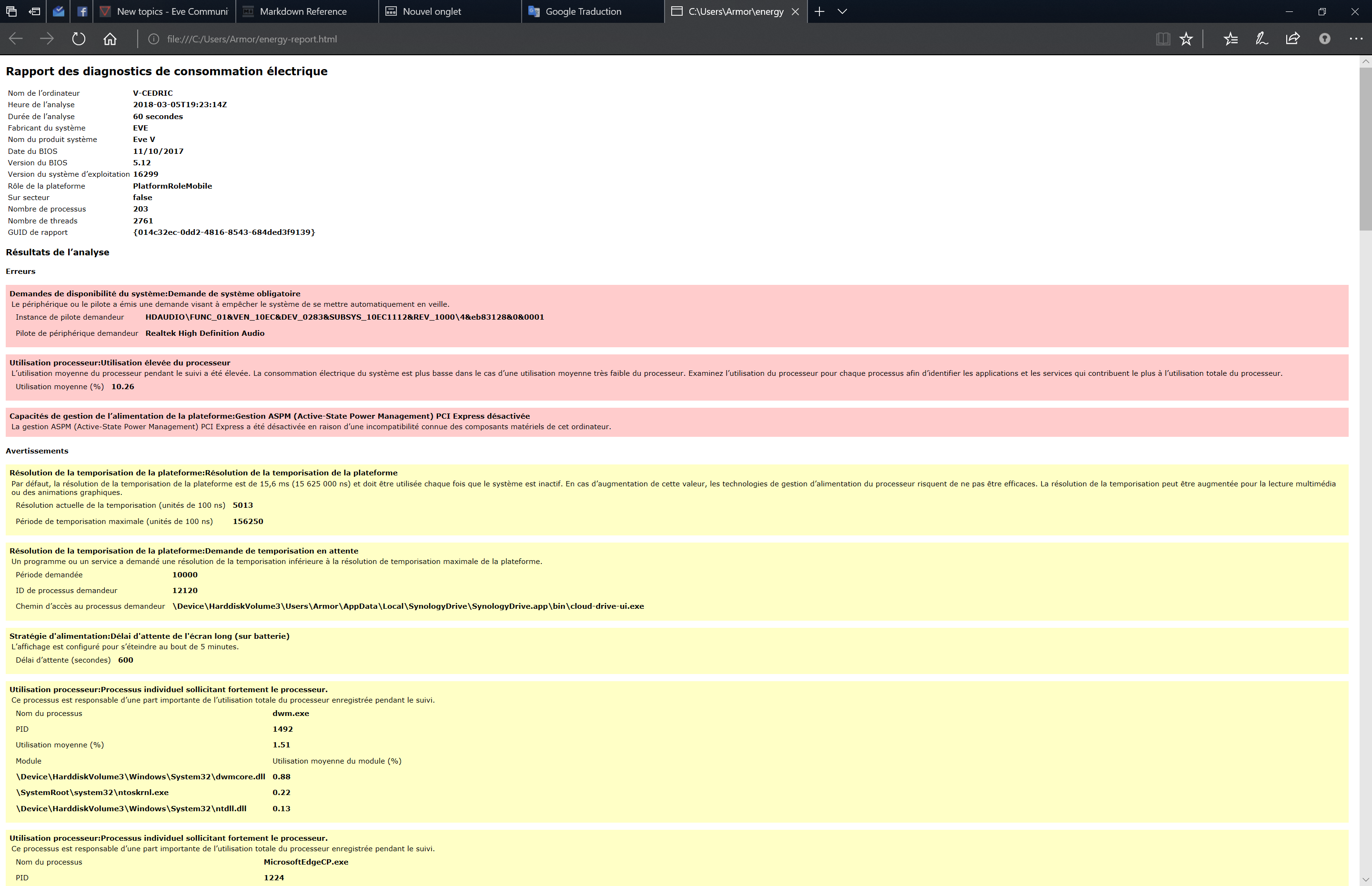