EVE next project and why it should be a laptop (update)

Next Step, Next Big Thing, What Should be Done and Why My Idea is Better Than Yours:

So. Laptop it is!
Now, I see two roads and here I can tell you about them. I though about posting before, but I’m always scared that Big Names will notice an idea that could be EVE’s idea and they will simply steal it. :3
That’s ridiculous, obviously, because ideas are the cheapest things there are.
So!

Now, because we are talking future - I would propose a guideline. A base configuration, if you may. I assume making a proper design would take a year and a half. That’s with time buffers already.

Take all that. Imagine a matte, slick design. You’ll get XPS 15, oh shit. You’ll get a V successor. Eve-L. Geddit? Heh. Building on what Eve already know: that the best marketing is simply a good product.
And that they know how to make one.

That’s my proposal. Wanted to write about it for few days now, especially after hearing from my work colleagues about possible workstation from EVE.

Thank you for your attention : )

29 Likes
What is the Graphics Card Specification?
The V blew me away but whats next?
Why the next project should be an Eve Pro Notebook
A device like the Surface Book
fanoftech4life April 15, 2017, 9:26pm #2

To me it should be more than a laptop. It should be a convertible (not detachable but with a 360 hinge).

Use V as a model and through the commcommunity I think we can get the best device possible.

Loving this idea. So something blade-pro-ish in style (as in sleek, matte, good keyboard), but not quite as extreme in the specs.

I think so. Flagship, yes, halo product - sure, but one for people, for us, with reasonable choices on every step of the way.

Also a matte screen is a must. I assume Eve can play the connection card for the current screen built in the V to get a screen adapted to the community needs…

I know a lot of artist friends who would love something like this.

Obviously, it would be amazing if we would have everything and a reasonable price. Unfortunately, product development is a matter a compromises and balancing, and because of that “everything and kitchen sink” approach may simply result in yet another super-expensive niche-but-not-really product. I’m sure @Team knows much about the possible drawbacks of digitizers, convertibles, touch panels and other things I have no bloody idea about, because I did not ship a complex hardware product. : )

I’ve come around on 360° hinges; not because I want a giant tablet, but because I want the keyboard out of the way when docked. My work MBP 15" frustrates me in this regard.

On the topic of keyboards, there were compromises made with the V keyboard due to its smaller size. I’d be very happy if we can get a dedicated column for navigation keys, like the HP Spectre x360: 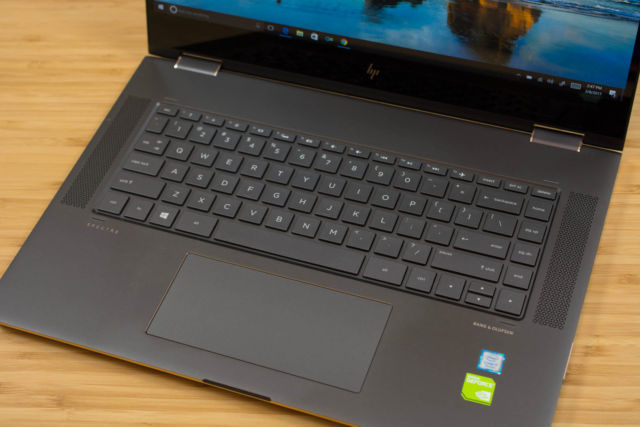 The display can be a differentiator. Matte would be awesome, as would a taller resolution like 1920x1280 or 2160x1440. Small bezels could reduce the overall footprint, and personally I’d prefer as small a screen as possible while still adequately cooling the internals. A little extra thickness I am fine with, but I find a hunking 15.6" slab to be unwieldy. AMD is an interesting angle; would they do a 4C/8T APU?

I understand your reasoning, but I’d say that we should think about the best possible first, then calculate the price/what-it-gets-you-ratio and how to implement it. I don’t know how big parts of the development part here worked, but I have the feeling that the V really is 99% the best thing out there for 99% of the people looking for a tablet 2-in-1 at that price and with what’s out there and I thought that reaching for the stars got Eve there. If not, then ignore my post

you were here way before me

Edit: @Ryan a good keyboard really is key IMO so many people I know do all their writing in laptops

Either of them might end up in my possession if developed, especially if there is a 14" variant (which is more realistic for the middle class laptop), as this is my personal sweet spot regarding size.

Maybe we have a different understanding of “middle class”, though here I feel discrete graphics might either make a workstation out it or just be ridiculously weak for the price’s sake. I assume we are talking about a device priced in the area of 600 to maximum 900 €.

So for the sake of a competitive price I would rather suggest to use a 28W CPU with Iris Plus (formerly Iris Pro) graphics such as i5-7260U, i5-7267U or i5-7287U. Since the price/performance ratio tends to be better with i5 processors, I’d leave it at that, though of course also a corresponding i7 (like i7-7560U) could be used/offered as high-end model.
Iris Plus graphics would go beyond everydays’ needs (for non-workstation-users, that is ;)) and allow some light gaming. I would expect anyone who desires to play anything more ressource-hungry than Counter-Strike or even AAA titles to buy a device with decent discrete graphics anyways.

While I personally feel in a non-convertible laptop those are out of place, I do understand there’s quite different views on that. Maybe a cheaper non-touch version can be offered in any case.

Totally second that. A powerful workstation doesn’t need to last forever, as it is likely not something you are carrying along all the time due to size and weight.

edit: whoa! Just wanted to share the first things coming to my mind, didn’t realize the post got that long…

The problem is, for artists, there really are no devices that suit our needs - the wacom mobile studio pro probably comes closest - but it doesn’t have a keyboard (only an accessory one - not an attached one) and a terrible battery (some say 2-3 hours!) Plus, it weighs 5 pounds without a keyboard.

I’m not saying it’s something that Eve should make, but I am saying if someone built one, I would buy it. Basically, I want exactly what you listed, but with Wacom tech and a 360 hinge.

Theoretically: why not 180?
Either way, I seriously think it would complicate the design, bump the price ~10%+ and add little.

A little extra thickness I am fine with, but I find a hunking 15.6" slab to be unwieldy.

Absolutely. I assume some clever engineering would be very much needed.

AMD is an interesting angle; would they do a 4C/8T APU?

I have a soft spot for them. I think they will with their APU Zen-based line, yes.

I don’t believe it’s a good idea. The cost is silly. If the rumors are true and if Intel will really implement AMD GPU on die, then we would have something interesting.

Absolutely, as you wrote. I am under impression that crossing 35W baloons the dimensions, which is not something I would be very interested in.

The problem is, for artists, there really are no devices that suit our needs (…)

I’m not saying it’s something that Eve should make, but I am saying if someone built one, I would buy it.Basically, I want exactly what you listed, but with Wacom tech and a 360 hinge.

Understandable. iPad Pro showed that there’s a good place for proper art tools on the high-end. Well, I don’t know Eve ideas about the future, but I’m sure they understand their customers and they will, once again, propose some things to discuss when the time will be right. Hell, we nearly had Wacom tech in V. : )

When is the dual pen protocol debuting?

No exact date just that it is “soon” apparently.

I think the 360 degree hinges are a double-edged sword. I never used it since I never had a device with it that had a pen and without a pen it is kind of silly… But a pen is also shitty without a 360 degree hinge IMO. And it sells from a marketing perspective. So, I’d be pro pen + 360 degree hinge, but one of them alone is useless and nothing of it is pretty retro and I don’t know, if many people want that. But a touch screen is a must for me. I use it so often since sometimes it’s just easier than reaching to the trackpad

I don’t believe it’s a good idea. The cost is silly. If the rumors are true and if Intel will really implement AMD GPU on die, then we would have something interesting.

of course the difference in OEM prices may be bigger, I have too little insight into that to judge properly.

But of course I’d also be happy with the AMD GPU on die or even a (hypothetical) decent APU.

Just as like other said I’d definitely go for a 360° hinge solution. That’s why:

Could be retro compatible with V pen, so it would start to create a coherent Eve ecosystem

Could be, but will not be, if we’ll go with more expensive and maybe problematic Wacom tech, right?
I don’t think going all in for ecosystem is the right way to think about a product. Let’s make a good standalone thing - that does not count on anything external.

In some case working with a “tablet”

Wait, so it should be detachable? That takes design problems through the roof.

that’s the type of thread I like to read and discuss about! Well done man;)

Thank you, but I honestly don’t think I’ve done much different than any other thread like this one.

Pretty sure that he meant “tablet” as screen with the keyboard (plus insides = everything else) folded back. At least he was making a point for the 360 degree hinge

When is the dual pen protocol debuting?

No exact date just that it is “soon” apparently.