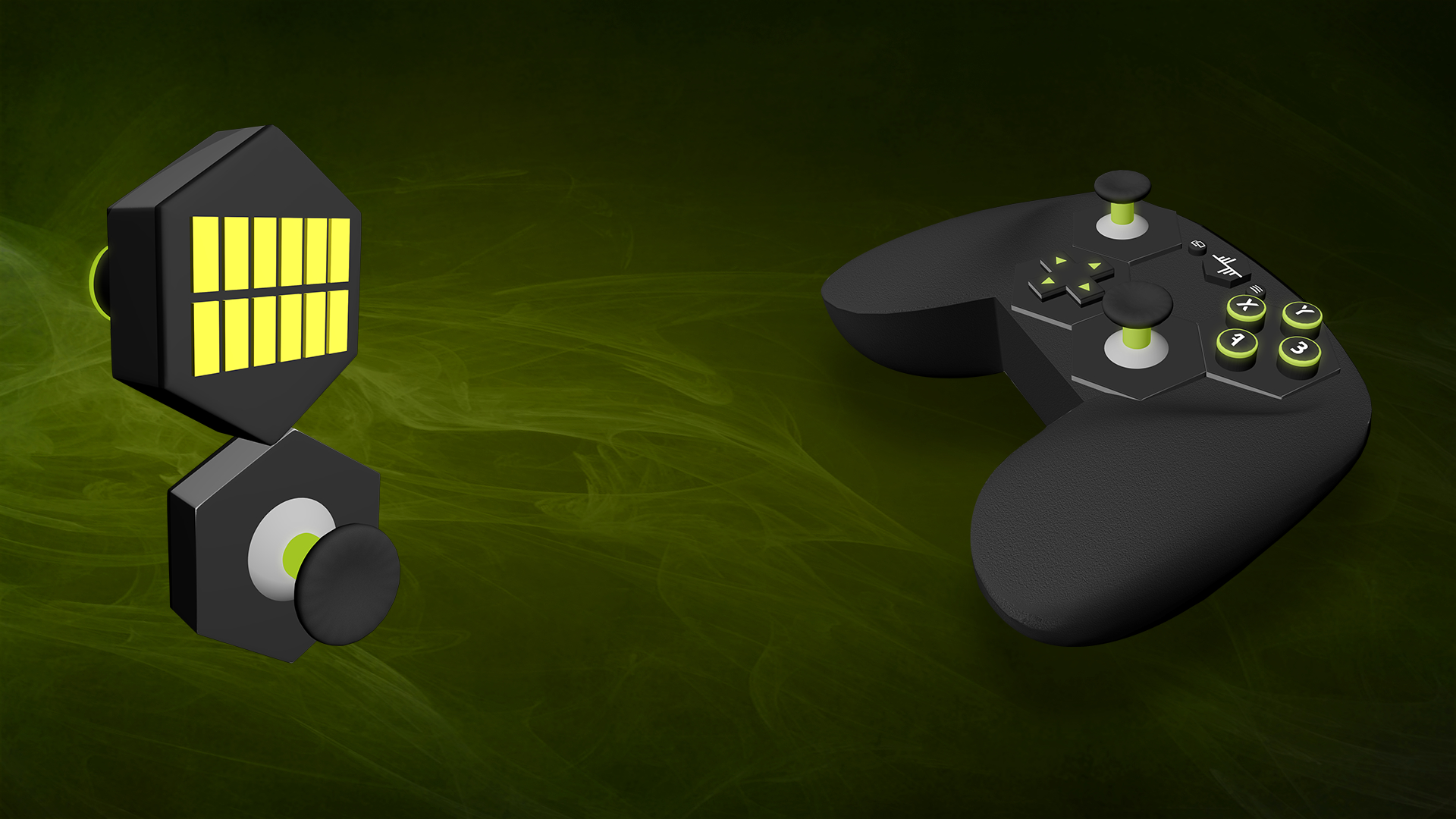 I didn’t make this for Eve, but I’m not going to build so why not.

A while ago I did a specialization course for my bachelor degree. I chose a specialty in “Product Concept Development” and “Product 3D imaging”… Or something like that, we have to assign our own names to it.

Anyway, I ended up with designing a new game controller, with many new features. Some quirky, impracticable or maybe even impossible. Some that should exist.
Maybe it’s an idea for Eve to enter this market? While not profitable at all, at least I gave my ideas about it.
I made the product sketches in illustrator, so they are not exactly a flat design version of the 3D 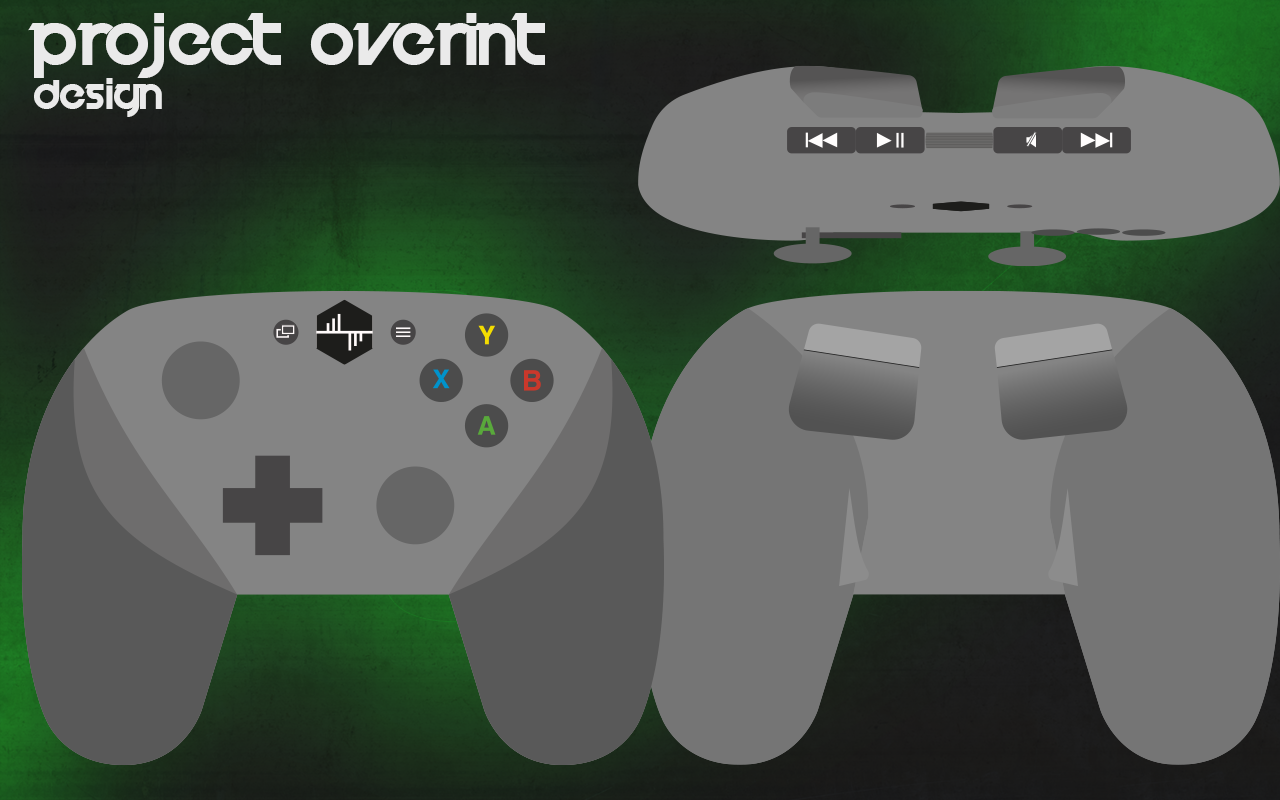 Starting off with it’s design. It’s not that very unique. I’ve spend several weeks claying and molding several materials trying to come up with the perfect ergonomic fit for a controller. My conclusion was that any of these generally will fit good. Exact dimensions are a bigger issue. A thing to notice is the angle of which the “feet” are sticking.
The more they are sticking outwards, the more you need broader shoulders. I don’t think it’s the best position to be in, but you can try it yourself.
The thing that needs the most attention when coming to production is the outer curve. That sits in the palm of your hands, so that’s the most contact. Besides that, the “body” (with the buttons etc) is a little bit inwards. 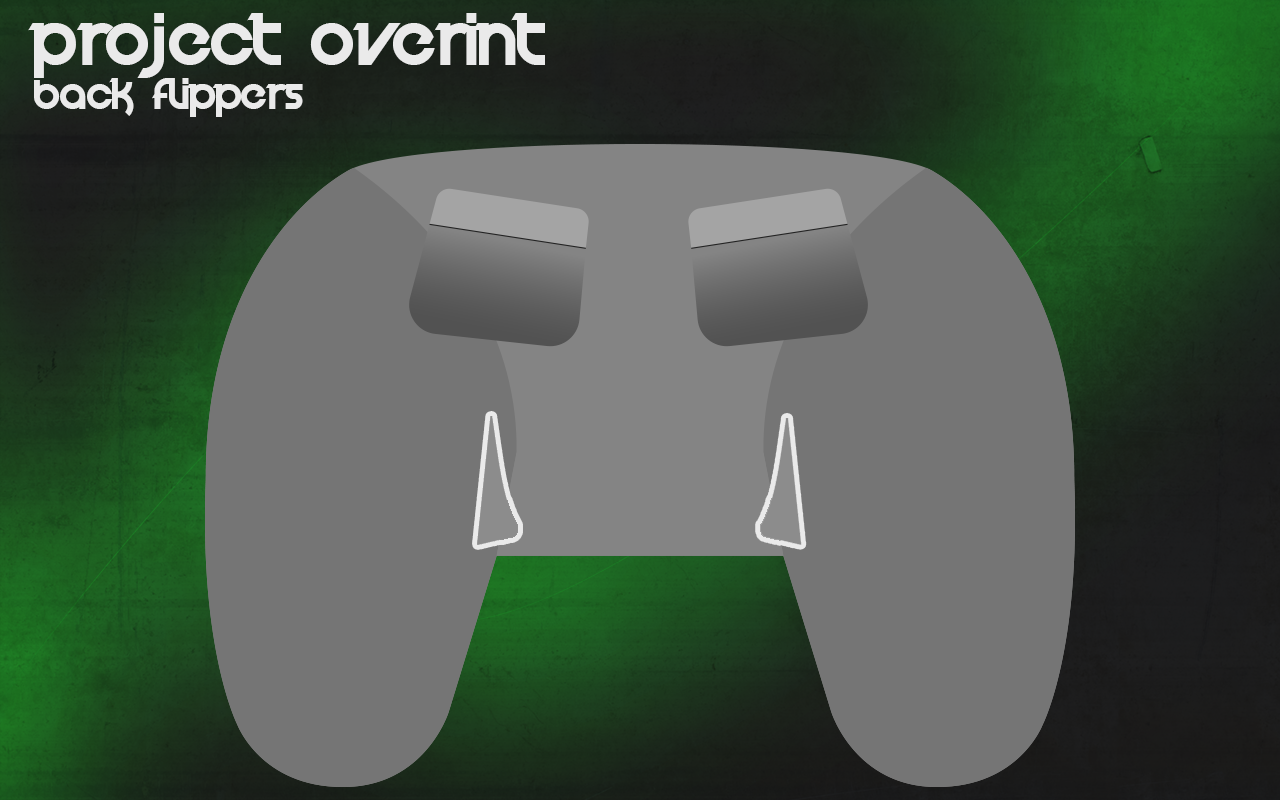 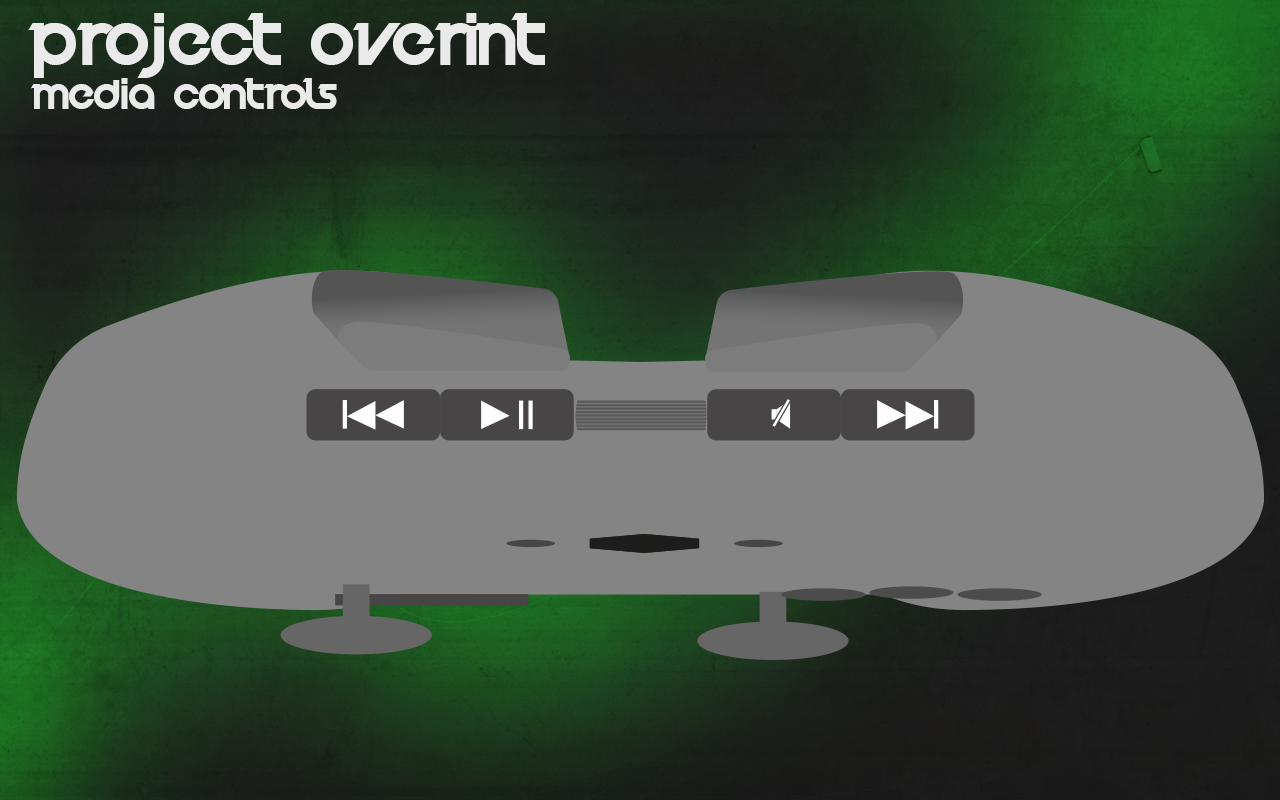 Media controls I don’t know about you guys, but with certain games I like some music to go along. It’s also nice to be able to adjust the volume at all (with a volume wheel).
Exact position of this is going to be tricky though. Alternative solutions might be better. But the functionality should be in the controller. 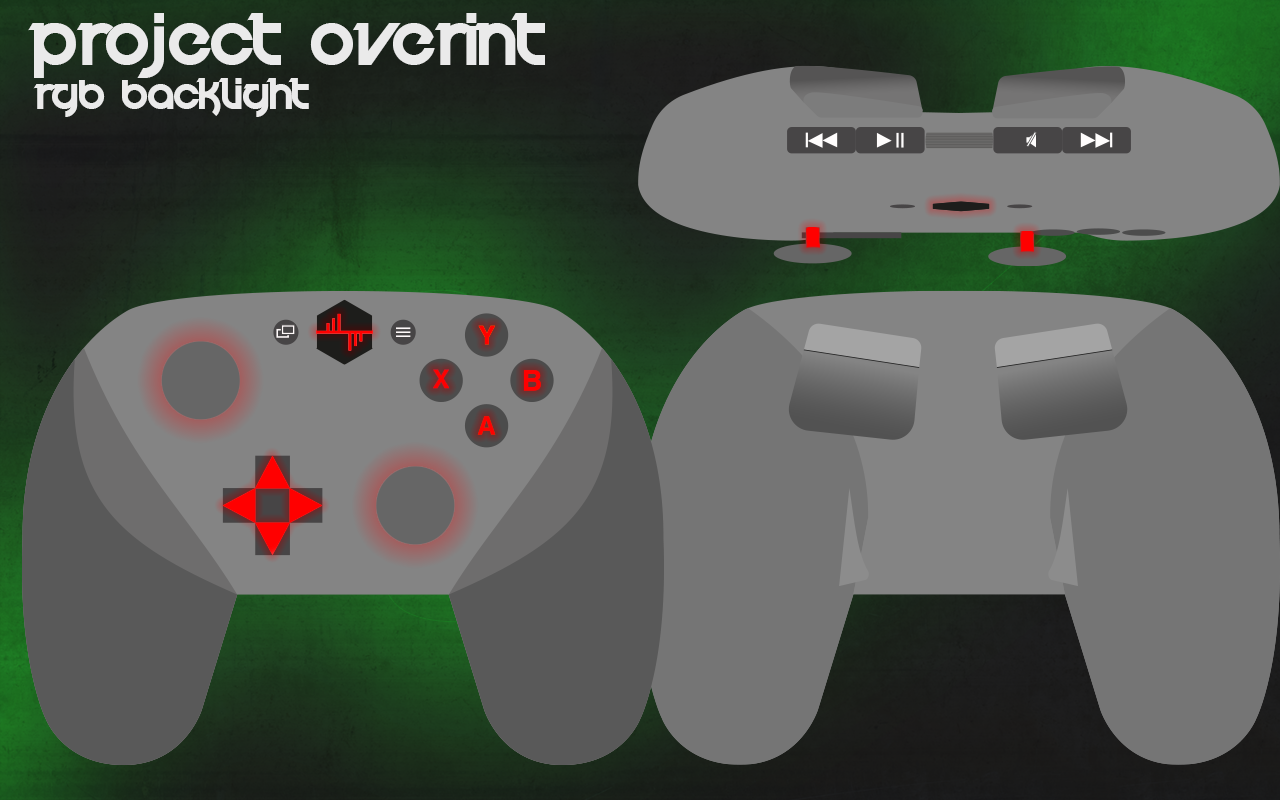 RGB Everything! It’s a gaming device… What do you expect? 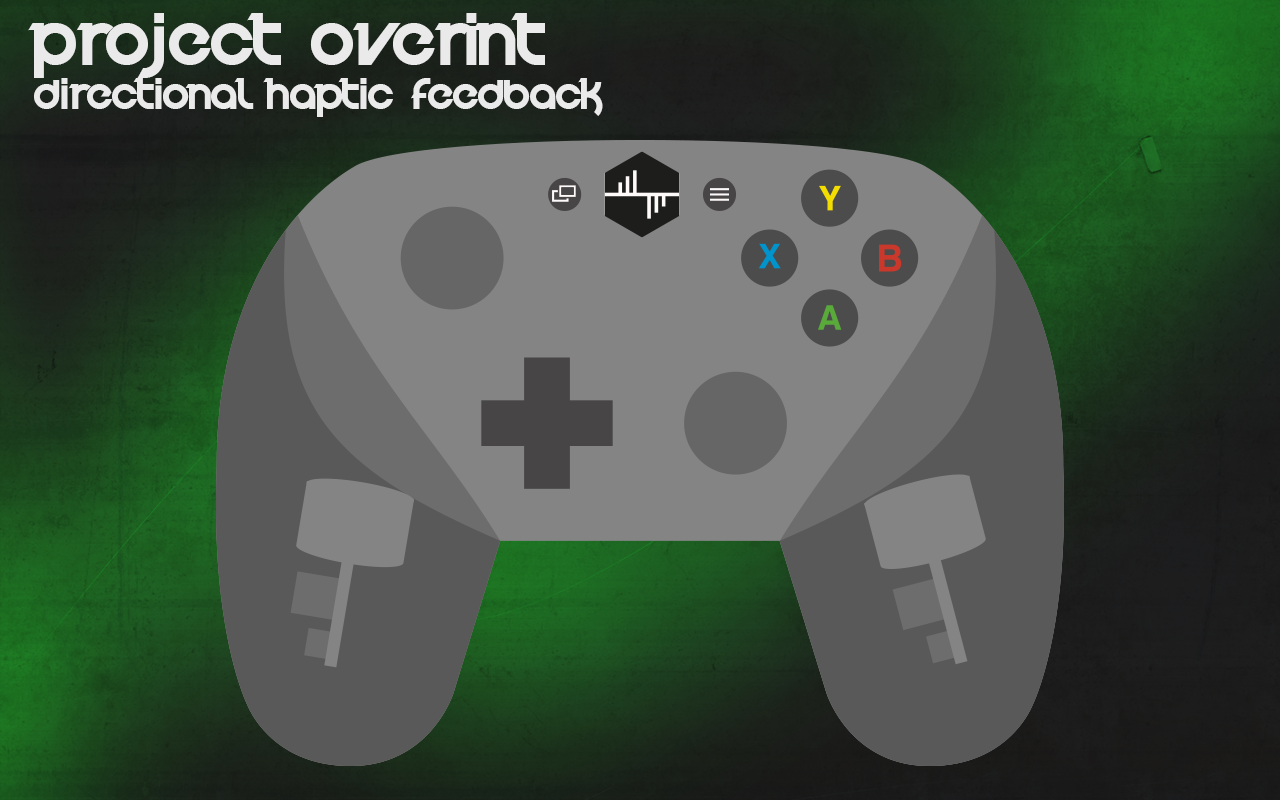 Directional Haptic Feedback Well… I’m unsure if this even works. But the idea is that both legs have their own soft and hard vibration motor. The xbox one controllers have a heavy one in on leg, and the lighter one in the other. The idea is that, if vibration is used for something directional like being hit, On part of the controller shakes more then the other part. I think some more constructional adjustments need to be made for this though (like vibration dampers in the middle of the device). 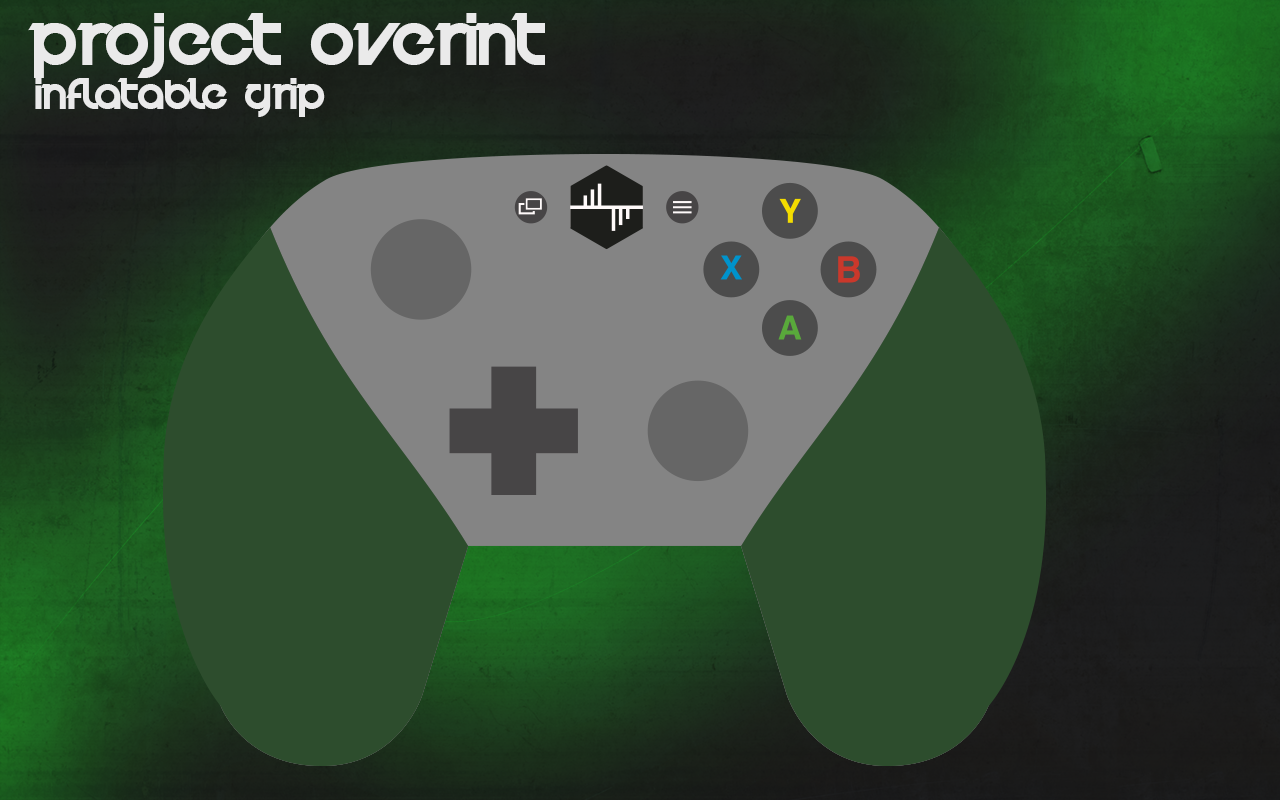 Inflatable Grip. I told you some where maybe impossible and mostly gimmicky. Well this is to give users with a real big hands something to hold. No idea how to make it function properly, how the vibration will be veld if done with air or liquid. I think it might be possible though. Any ideas anyone?
Also possible to be sold as separate accessories? 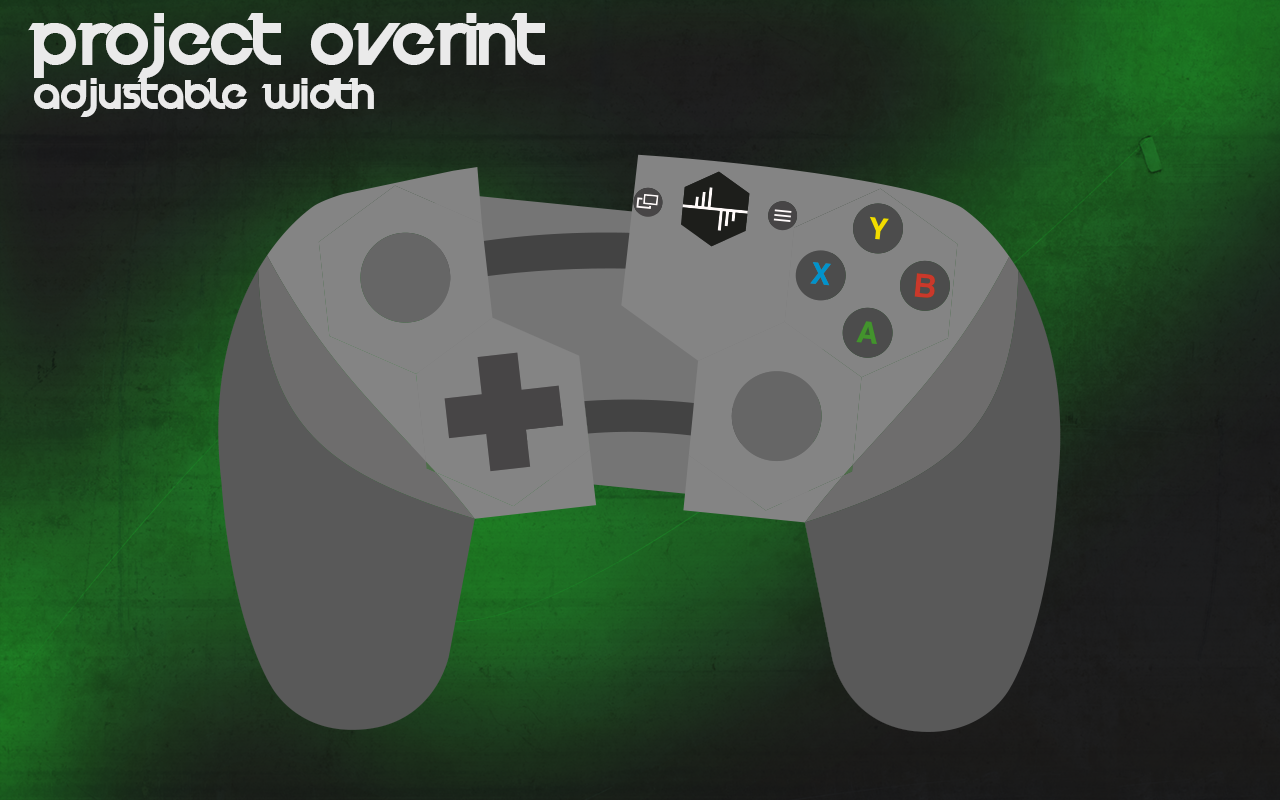 Adjustable width I know this is possible. A similar system like headphones have could be implemented. Maybe with a button to force the controller to stick a certain width. Mainboard needs to be protected with hard plastic/metal of course, it makes the entire device less durable with aggression in mind. But those with real broad shoulders can use it!

And then the most awesome feature. 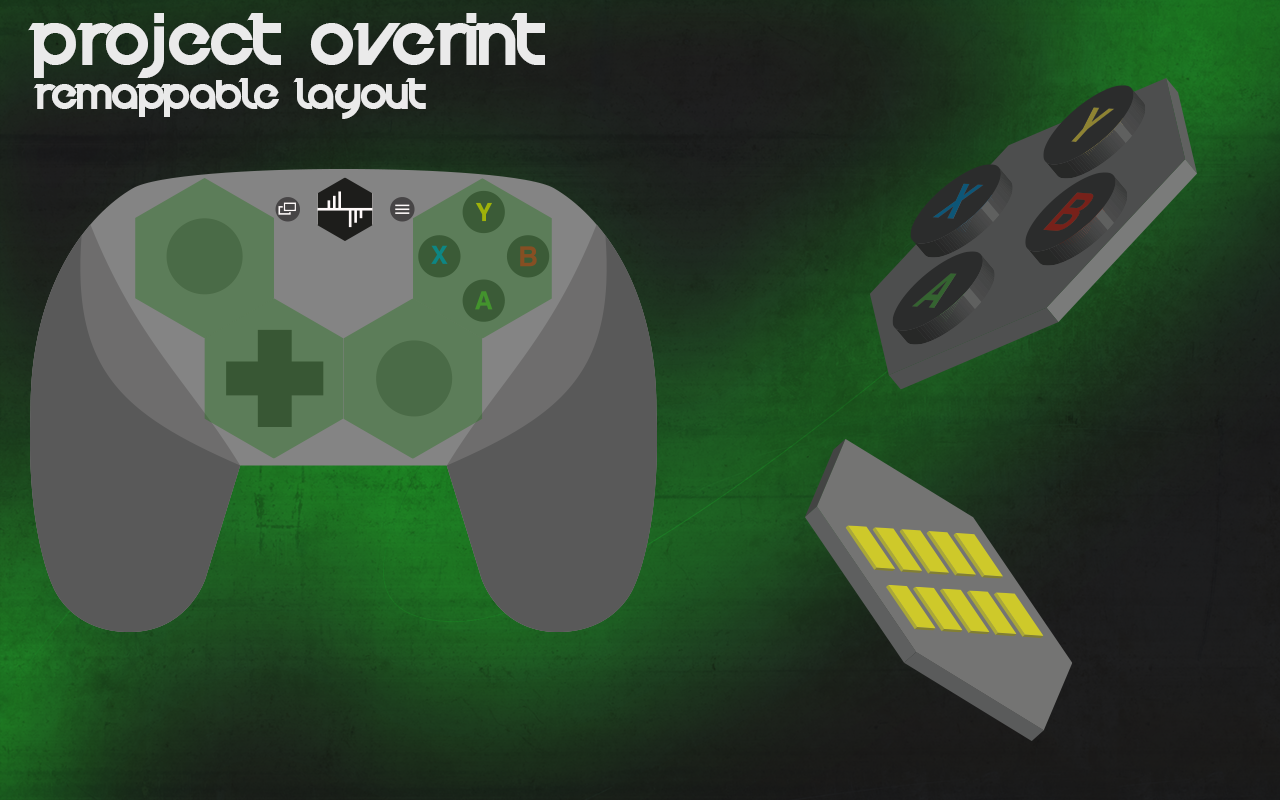 Remapable layout! You can change where what hexagon is. Or maybe invent entire new ones? Maybe something like a track ball? Or pressure sensitive button? You could even make a component that spans multiple of these places. Seeing that pogopins work, I couldn’t really see why this wouldn’t work. The exact mechanism to keep them in place and connecting etc is of course not thought out that well, but I can’t imagine that is why it can’t happen.
Do note, that the plates will be a LOT thicker, I hadn’t fully realized that when making the graphic. But even if it’s just for the normal ABXY buttons, there needs to be a lot more depth.

But there you go. My thought about a controller that Eve might be interested in making… I hope. What do you guys think? Is the idea at least something? Got any feedback (positive or negative).

I used my own personal logo as the center, but it can easily be swapped for Eve of course

Getting into the controller game is a bit too hard. MadCatz did a surprisingly good job, but even Steam can barely get people to buy the controller. XBox, PlayStation, and Nintendo have it pretty much sealed.

The steam controller isn’t something that really competes with the regular controller. It has some legacy interactions. That thing has it’s own place in the controller industry with its touchpads.

XBox, PlayStation, and Nintendo have it pretty much sealed.

there are a lot more that make gaming peripherals then those. Especially nintendo is basically a non issue outside their own ecosystem. I dont’ even know if they allow third parties to develop (primary) hardware for their ecosystem.
Other names are Logitech, Razer, Horipad, Power A, Nacon, Hori, Big Ben to name a few. There are also a load of controllers for PC, Android and even for iOS and Apple TV. Or controllers specifically targeted towards “pro” gamers, such as the xbox elite, several razer controllers and scuf gaming controllers.

Of course some market research has to be done before committing. But there is a chance!

The flat designs are done in illustrator. The 3d design is done in Maya.

What if we could extend the controller even further to contain the tablet itself, like controller accessory the Razer Edge (Project Fiona). It could be made adjustable to support various other tablets like the Surface, because I think our graphics chip is already capable of outputting PS3 level graphics, which obviously is very low end by current standards, but still playable.

The problem is you need to always carry a mouse and use the keyboard, and at that point there is no advantage in a tablet over a regular laptop. This controller design would give tablets the immersive gaming experience (think Nintendo Switch) that laptops cant give you

Directional Haptic Feedback Well… I’m unsure if this even works.

If you get the chance, try the vibration experience on the Nintendo switch. AMAZING things are possible in terms of haptic feedback with today’s technology.

Wouldn’t that get pretty heavy? I can’t imagine holding a controller for an extended time with the V attached.