Does EVE V have a blue light filter switch on it

very important question to me does EVE V have a blue filter on it.

The V comes with only Windows 10 (with drivers) and the screen calibration software installed. If Win 10 comes with a filter, then yes, if it doesn’t, then no. I use f.lux myself, it’s a lightweight program for Windows that does the filtering.

Yes, it has a night light mode which is found in every Windows 10 device after a certain Windows update.

In one of the most recent updates of Windows 10 a feature called “night light” was added. It is a blue light filter and can be customized from the settings pane.

edit: @AntonyTerence beat me to it

f.lux still work way better and it is free.

Can you elaborate?
Is it because of features like gradual fade in and adjusting to your local day/night cycle, or does f.lux work better on a technical level?

As the others stated there is a build-in Windows program and f.lux who do the job (and f.lux is the better one of the two).
It may be interesting to know that photo color editing is flawed during the time those programs are active.

Night Light shows in the Setup Display area, but is grayed out and doesn’t seem to work. I have all the latest Windows updates installed so something else is not working. I sent a message to support asking about this.

Did anyone manage to solve this without installing f.lux? For me all night light options are greyed out like this so it stops me using it: 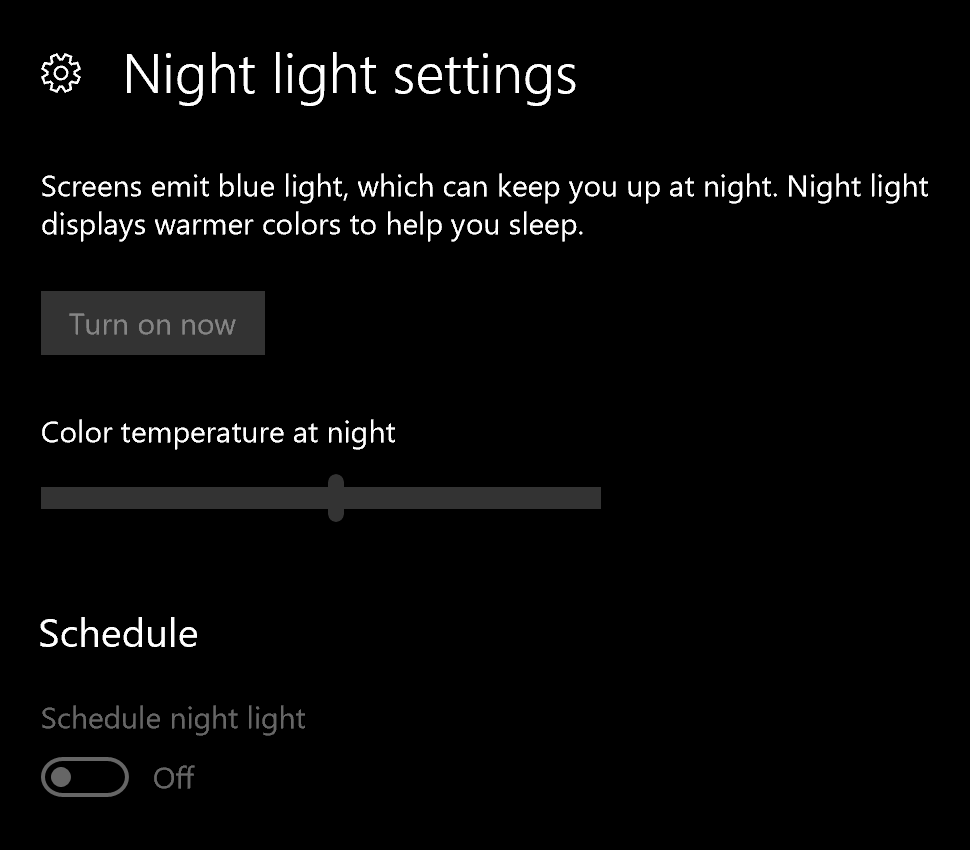 Intel HD Graphics 615 display driver is installed and I have all Windows Updates.

Restart the V 74 times. At some point, Windows should fix itself. Otherwise, just poke around the settings a bit, but don’t actually change anything - the last time I tried to “fix” the gyro on my T3P,
I “fixed” it by deleting the registry key for autorotate.

…Also, have you tried toggling it at night?

Instread, you could try this:
https://answers.microsoft.com/en-us/windows/forum/windows_10-other_settings-winpc/night-light-blue-light-setting-is-disabled-greyed/b8393c20-9bf7-4721-8beb-ee6b2f575c29

Thanks! Adding those registry keys made the option unlock so that I could enable it, however enabling it doesn’t actually do anything, it just looks the same.

That’s strange. Even when you click on “night light settings” and select “Turn on now”? You might need to reboot if you haven’t already done so to fix it.

Yeah strange, I guess it forced the option be available but didn’t fix whatever was causing it not be to begin with e.g. drivers or whatever it is… yes I used turn on now, scheduling off, and it was the same after a reboot (still makes no difference)

I’ve installed this driver: Download Intel Drivers and Software rebooted, still doesn’t work, thanks for your help though, will post here if I figure it out. Perhaps it’s something to do with that colour calibration software (so far I just tried exiting it)

It shouldn’t be, as I have not touched the calibration tool (it runs on startup) and I have the same Intel driver as you and I’ve never had any problems with the night light feature. Must be something strange with your configuration.

Hey this has fixed it!

In light of these problems, I just want to bring up f.lux again. It’s a wonderful software for light filtering that has many more options than the built in filter in Windows. It’s free, it’s lightweight, and it should almost always work.