My son is starting Year 13 and the school want them to provide the own device , the preference being a Chromebook since they are heavily tied into Google Education services. We could buy him a Windows device but I feel the cost of a laptop may e more than we want to pay specifically for hi schoolwork since he doesn’t require much storage as all there work is cloud based. They also need a device with keyboard that will not require charging through the day. many Chromebooks appear to have battery life at approx. 10 hours so would fit the bill for a school day.

He has specifically stated he doesn’t want an Google branded machine as the school have a batch and he felt they were not up to spec for their purposes. Does anyone use Chromebooks that could advise as to any latest devices that they could recommend?

I would probably get 4gb RAM models to be sure it has enough memory to cover any apps he may be using and to be a bit future proofed. Any other spec information I should be looking for e.g. processor?

The good thing is that Chrome books with 4GB ram are already available.
Example Amazon:
https://www.amazon.com/Samsung-XE510C24-K01US-Chromebook-Pro/dp/B071LB1GG4

The bad thing is that they are not very cheap anymore.

You may find a lot of information on Google.
Clever son you have

I mean there are a lot of 4gb things around:
https://www.amazon.com/s/ref=nb_sb_ss_sc_4_12?url=search-alias%3Delectronics&field-keywords=chromebooks+with+touch+screen&sprefix=chrome+books%2Celectronics%2C527&crid=U4MMJMGT4TVJ

looks like the Samsung chromebook is not available in the UK. Will compare the spec to other devices and see if there are comparable specs. Thanks

If there still is time, you might want to consider waiting until Google has its event beginning of October.
It’s rumored that a new Chromebook will be revealed during that event as well.

Here’s one from Acer that was just announced, looks pretty good 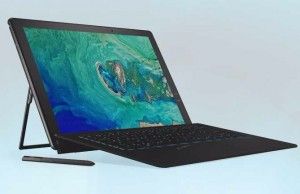 The Best Acer Laptops From IFA 2017

Acer's laptops from IFA 2017 include a Chromebook and some stylish 2-in-1s.

Seeing the Google Assistant make its way to Chromebooks really isn't too much of a surprise. Google has opened the SDK to any party who wants to embed the Assistant in their devices. So, naturally they would want to bring it to their own operating...

I recently bought the Samsung Chromebook Pro for my wife who is an educator. She loves how small and light it is. Battery is reported as not lasting long enough…but she’s thrilled with it. It’s a great machine that has been developed to run Google Play Store apps (i.e. Android apps). While all of them don’t load perfectly, she’s been able to make it really work well for her needs.