Can we help saving the environment just by switching browsers?

tldr: If you are using Google Chrome or Mozilla Firefox, you are contributing to the world’s wasteful use of energy that’s equivalent to the annual power usage of an entire country of Hungary, Ecuador, or Azerbaijan. Switch to Microsoft Edge (Windows) or Apple Safari (Mac) to reduce the world’s carbon footprint.

Based on this report https://wearesocial.com/special-reports/digital-in-2017-global-overview there are almost 3.8 billion of internet users, with around 45% of them are computers. That means there are 1.7 billions of computers online in the world

Based on this report Browser market share, 59% of those are using Google Chrome to browse the internet, followed by 13% on Firefox. Therefore, there are 1 billion people using Chrome and 221 million people using Firefox on their computer.

Based on this testing Browser efficiency comparison - Fullscreen Video, it is proven that Google Chrome uses 30% more energy to finish the same task than Microsoft Edge, while Firefox manages a whooping 70% in the same scenario.

The computer that was used in testing was a Microsoft Surface Book, which based on this specification sheet Test Microsoft Surface Book (Core i5, 940M) Convertible - Notebookcheck.com Tests, has 78 Wh battery. From the previous report, it was reported that Microsoft Edge lasted 16:41, Google Chrome lasted 12:54, and Mozilla Firefox lasted 9:51 on the very same computer. That means, Edge uses 4.6 W on average, Chrome uses 6.1 W, and Firefox uses 7.9 W for doing the same controlled task. There is a gap of 1.5 W between Edge and Chrome, and 3.3 W between Firefox and Edge.

Note that this calculation was done on computers based on Microsoft Windows operating system, and the Edge browser is also only available on, and built-in, Windows. However, there is a similar trend in macOS-based computers in regards to the built-in Apple Safari browser as seen on this report here Chrome is still a threat to your MacBook's battery - The Verge

Not related to browsers but another example of extremely high energy consumption (~ in the area of Denmark’s consumption) caused by software is the current Bitcoin network.
I don’t want to say that the general idea behind it is good or bad (which could cause off-topic discussions

), but when thinking about the fact that this is meant to be an alternative currency, IMHO this specific case is not something we should strive for and maintain in the long run.

The Bitcoin Energy Consumption Index provides the latest estimate of the total energy consumption of the Bitcoin network.

well switching browsers wont really help the enviroment one bit. browsers or PCs or whatever technology is a “very very very small piece” in the things that “destroy” the environment.

Pollution and these things that MAKE that energy needed to power these devices are the much bigger culprits. Coal mines and processing plants are way bigger too.

Just saying these “you can save the environment by switching browsers” might be the biggest bs coming from a tech company (MS). That test is just a big marketing campaign for their “broken” browser which still doesn’t adhere to web standards etc and is pain in the ass for web developers (it has gotten better but…)

i am really sorry to be using such a drastic term, bur this is what some might refer to as playground argumentation. i recall the term “help” being used by the thread opener. of course it doesn’t save the environment on its own. and of course not all chrome andfirefox users are gonna switch. but a few users paying attention to their micro carbon footprint help. and imo the thread opener offered a few solid statistics to support his claim.
ever heard of the term “gender mainstreaming”? see, it’s the same thing with this. every litte bit of effort helps, contributes to the cause.
and as for the goodbrowserbadbrowser war. i, as a user that needs basic browsing - which also holds for the vast majority i assume - , am very content with edge (plus some addons like ublock origin). i also have firefox installed as backup in case something doesn’t work on edge, but it barely ever happens.

True - if nobody pays attention to the details then things will barely start to improve in the private sector.
Turning off the light when not used, using carpools etc. are all things which help just a tiny tiny bit when viewed by single events but can make a difference when done by a reasonable amount of people.
The referenced coal mines do not exist just for the sake of existence but (after some processing) to provide requested energy. If the latter decreases or increases more slowly - e.g. by increasing efficiency at all levels (incl. browsers

) - it will eventually help to tackle the existence of the former.
Of course not alone, but there is rarely anything which will solve the energy problems alone …

I am not going to switch away from chrome. Sory but internet explorer and edge scks. I have an i5 6600k processor and a lot of ram. And the performance of edge is terrible. Chrome loads taster and I can start opening websites faster.
I would prefer an electric car but a can’t charge it. I always have to search an parking space in the Street or on the nearby parking place. Next charger is 15 km away.

I try reuse what is possible. Sorting garbage (in Germany you have to), I throwing garbage in trashcans and not on the ground when I am in public/outdoor , buying refills with less packaging. I am using public transport for my way to work.

But I repeat i am not going to save the earth by switching away from chrome.

I use Chrome on some devices too bc of extensions I am depending on. It is just that I think we should not ignore but appreciate even small efficiency wins when possible bc in the bigger picture it can be a difference.

I think this is very interesting indeed and it is always a great idea to get the lowest hanging fruits first. Why not use Edge, if it does not make any difference on your use case and you save a small bit of energy at the same time?

Sometimes I hear people washing carton packages (ie yogurt) and recycling them. Rinsing with cold water is ok, but I’m quite sure the amount of clean water used in washing is far more wasteful than not recycling the carton.

The largest benefits can be achieved re-thinking housing and transportation. The best thing would be to move to a smaller apartment so close your work that you can walk or bike and using public transportation whenever you can and avoiding flying. I suck at the last one…

I use Firefox and will stick with it.
And Firefox recently had a major update that, among other things reduces the energy costs.

Not related to browsers but another example of extremely high energy consumption (~ in the area of Denmark’s consumption) caused by software is the current Bitcoin network.

The problem is for such big scale currency, you would need a really streamlined processes, and Bitcoin is anything but. The process of mining could be done with 1/5 or 1/10 of the power if a proper state-of-the-art hardware is used, not some consumer graphics card.

well switching browsers wont really help the enviroment one bit. browsers or PCs or whatever technology is a “very very very small piece” in the things that “destroy” the environment.

Pollution and these things that MAKE that energy needed to power these devices are the much bigger culprits. Coal mines and processing plants are way bigger too.

As mentioned by @uwetieforrest and @DAXaholic, it is just another way to help the environment with little or no inconvenience for most people. Do you think you could single handedly save the environment just by bringing your own bag to the supermarket? No.

Even if everyone does that, its still no, but now it does make an impact. Coal mines is a good example from yours; Imagine if the world would actually switch to more efficient browsers. We could save a whole Hungary worth of coal mines. Would that eliminate coal mining? No, but that would reduce it still.

Also that text and research was done by me, and I do recommend Safari on Mac computers. Builtin browsers are the most power efficient, in a lot of cases.

I am not going to switch away from chrome. Sory but internet explorer and edge scks. I have an i5 6600k processor and a lot of ram. And the performance of edge is terrible. Chrome loads taster and I can start opening websites faster.

I use Firefox and will stick with it.

I can totally understand if Chrome or Firefox is a better fit for you, and I am not telling you to change. If you have to spend more time with the computer if you use Edge instead of Chrome, its basically nullifying the energy saving that we made in the first place anyway.

But for many people, they use Chrome and Firefox because some pseudo-tech-geek friend of them told them to, even though any browser will work exactly the same way anyway for them, as mentioned by @Harri above.

Why not use Edge, if it does not make any difference on your use case and you save a small bit of energy at the same time?

in fact, for some things like Netflix, Edge and Safari can stream at higher resolution than Chrome and Firefox, that alone is an obvious advantage. Advantage that they would never know, because of those tech-geek who told them to ignore the built-in browsers.

@Patrick_Hermawan, absolutely onboard with you on saving energy, for the only planet we as of this life can live in

However, I use Vivaldi, its based on Chromium project and as an advanced user I use it, it has some features I need to do some geeky stuff, I am not concerned or alarmed by its energy consumption as of now, but as I do know that it is chromium based (open source cult I am), so, I do also assume it is moderate in its power consumption (unlike Chrome, yet to know the facts though on Vivaldi)…

Saw this study was done (a year old though): 10 Popular Web Browsers Tested for Memory and CPU Usage • Raymond.CC - Page 2 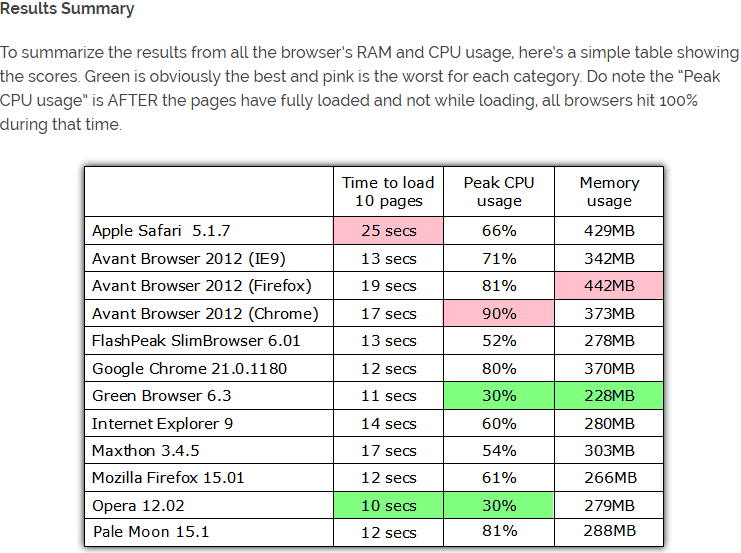 PS: I always think that Energy usage is directly proportionate to the power consumption of resources of the device, a.k.a. RAM and CPU (by any programs in the OS, browser are 1 of them).

That data is over 5 years old though, firefox was released in august 2012.

Agree…could not find any latest test of similar nature, there are few done recently but looks like paid or biased article, feel free to update if you find any.

Taking every post here at face value, I think this is the most sensible skeptical response.