Hello Eve and Eve Community, Just got an idea from this thread

http://dough.community/t/official-accessory-ideas/1661/86, so I create it, and try to explain it… I know may be this not for everbody here… but i think most digital artist gonna like it since it is similar to express key found on Wacom Intuos or Cintiq series…
Usually artist working on shortcut, it’s a bit hard to draw without additional button, so most of us still rely on keyboard. But if there’s additional button that we can customize the key it self it will be amazing! Me personally before using sp3, I used some software called tablet pro that create digital button on side of tablet (cost the screen size of course) see here : https://www.microsoft.com/en-us/store/p/tablet-pro/9nblggh1rqvc 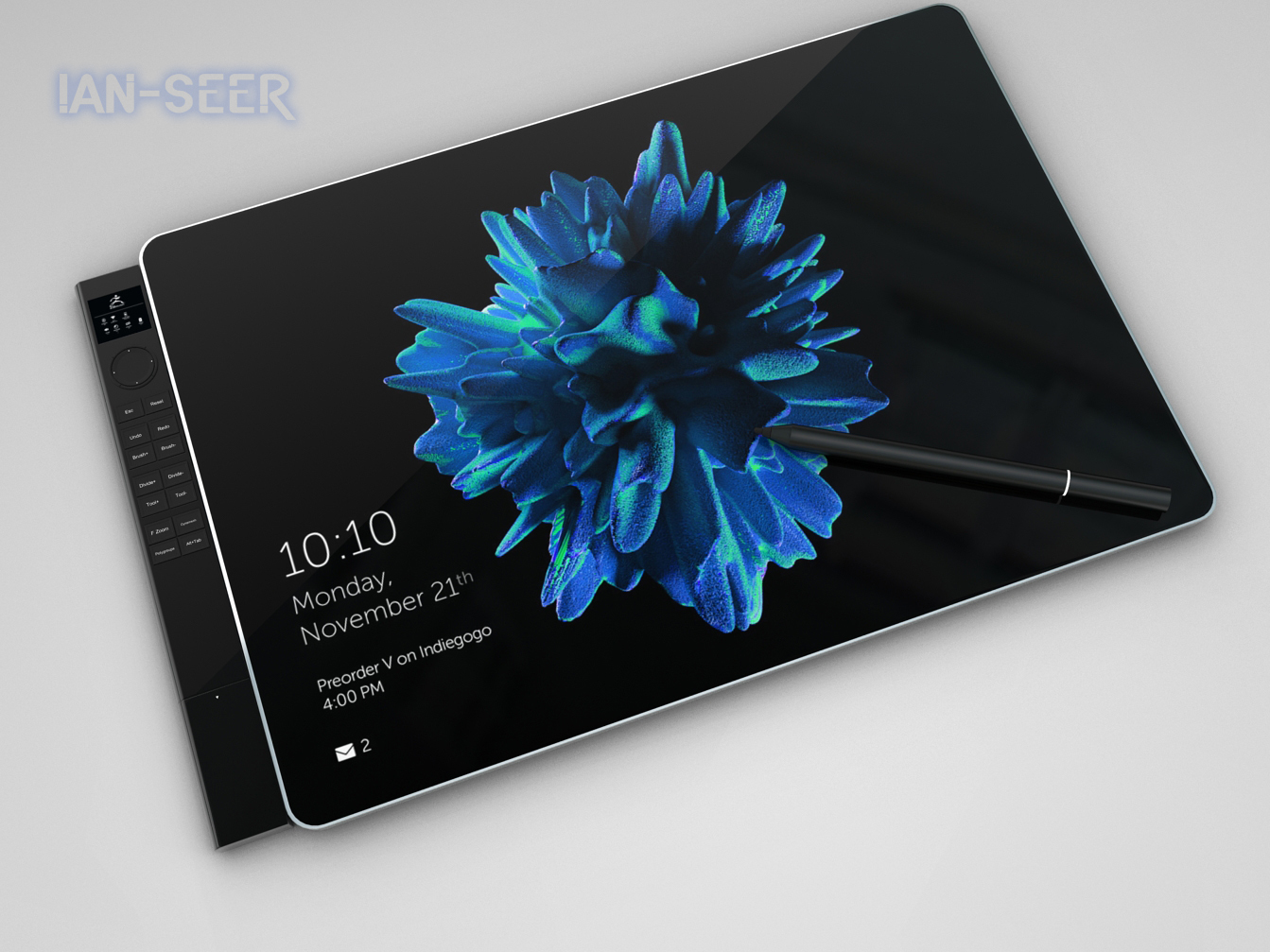 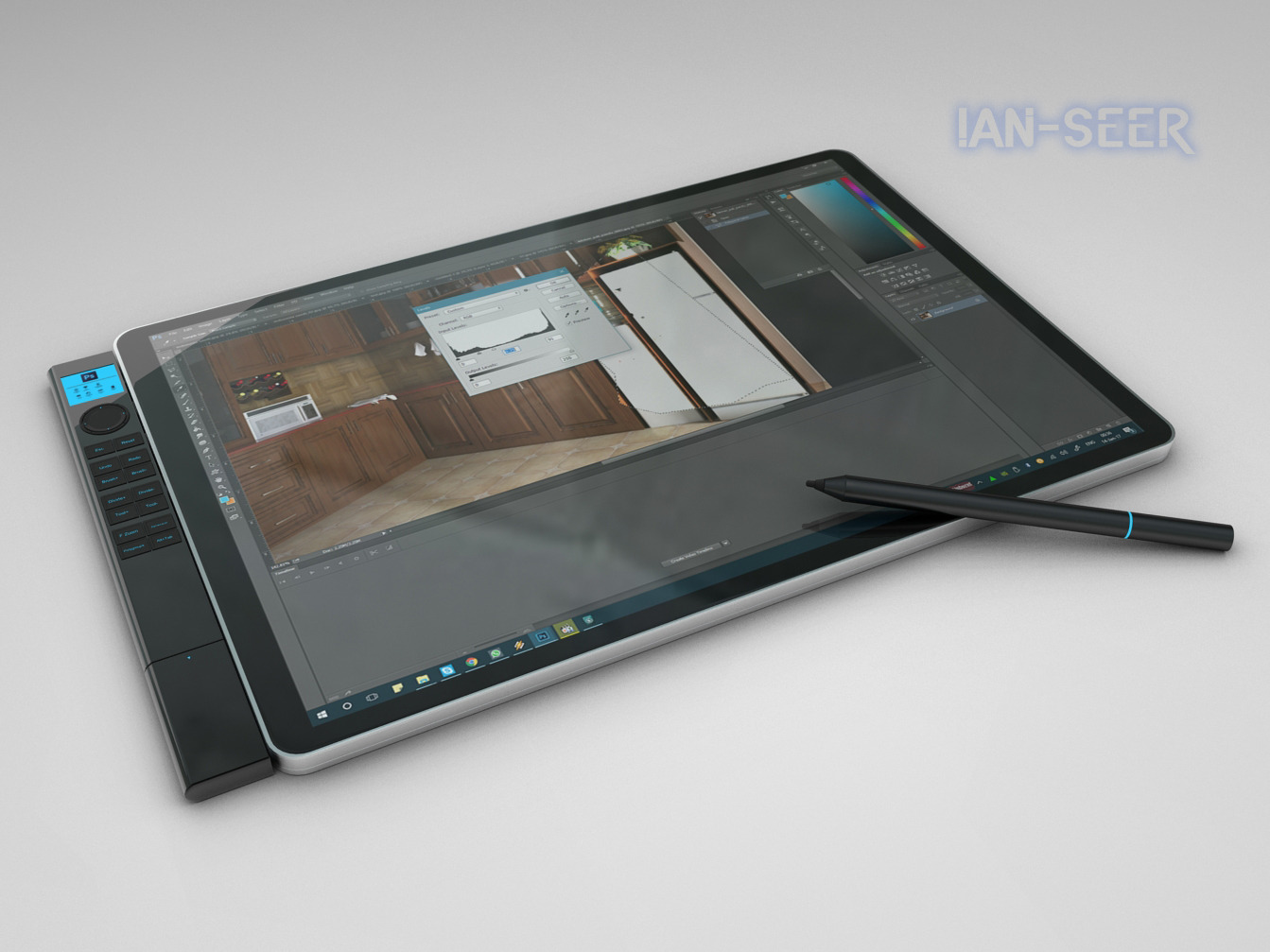 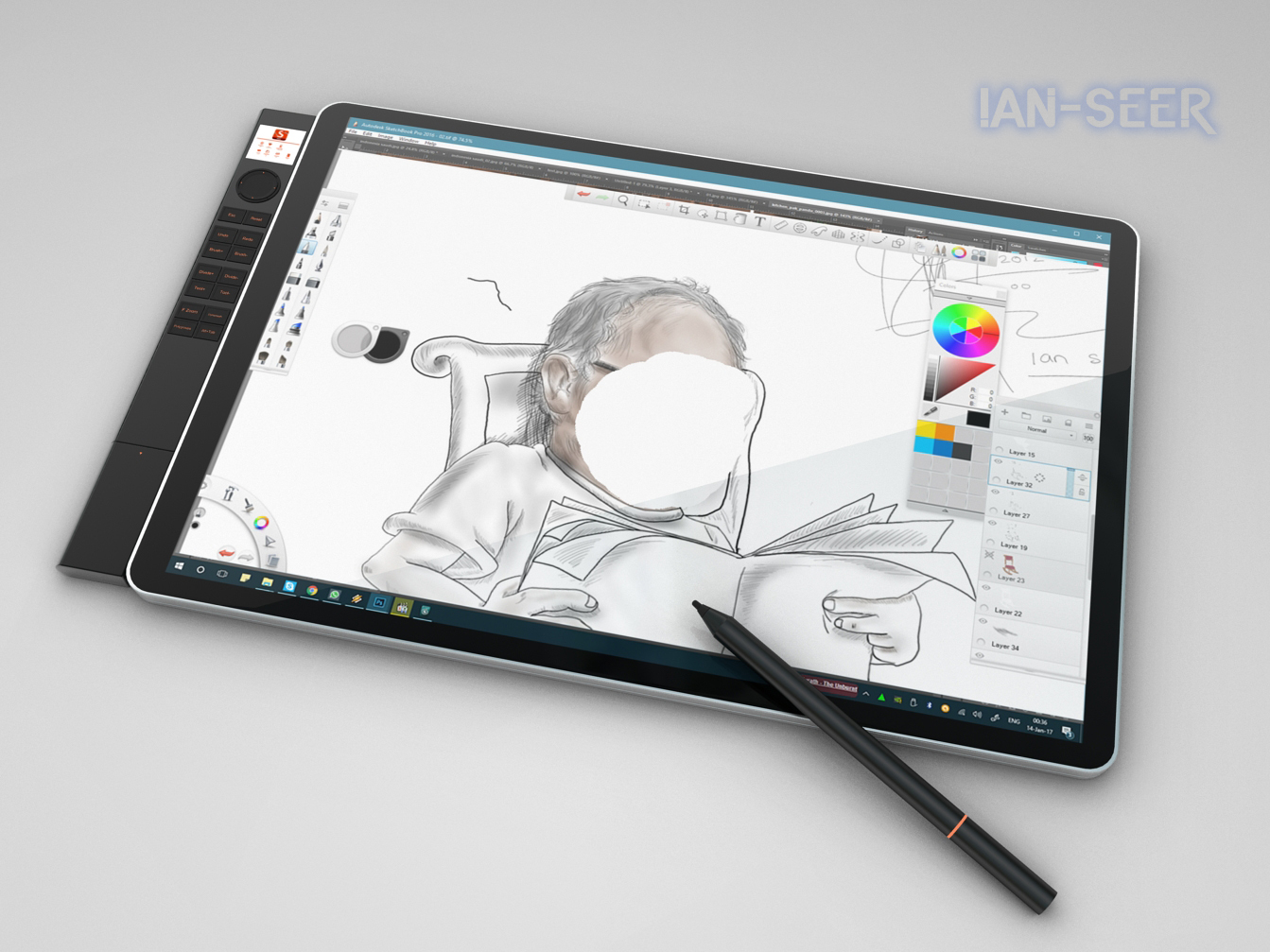 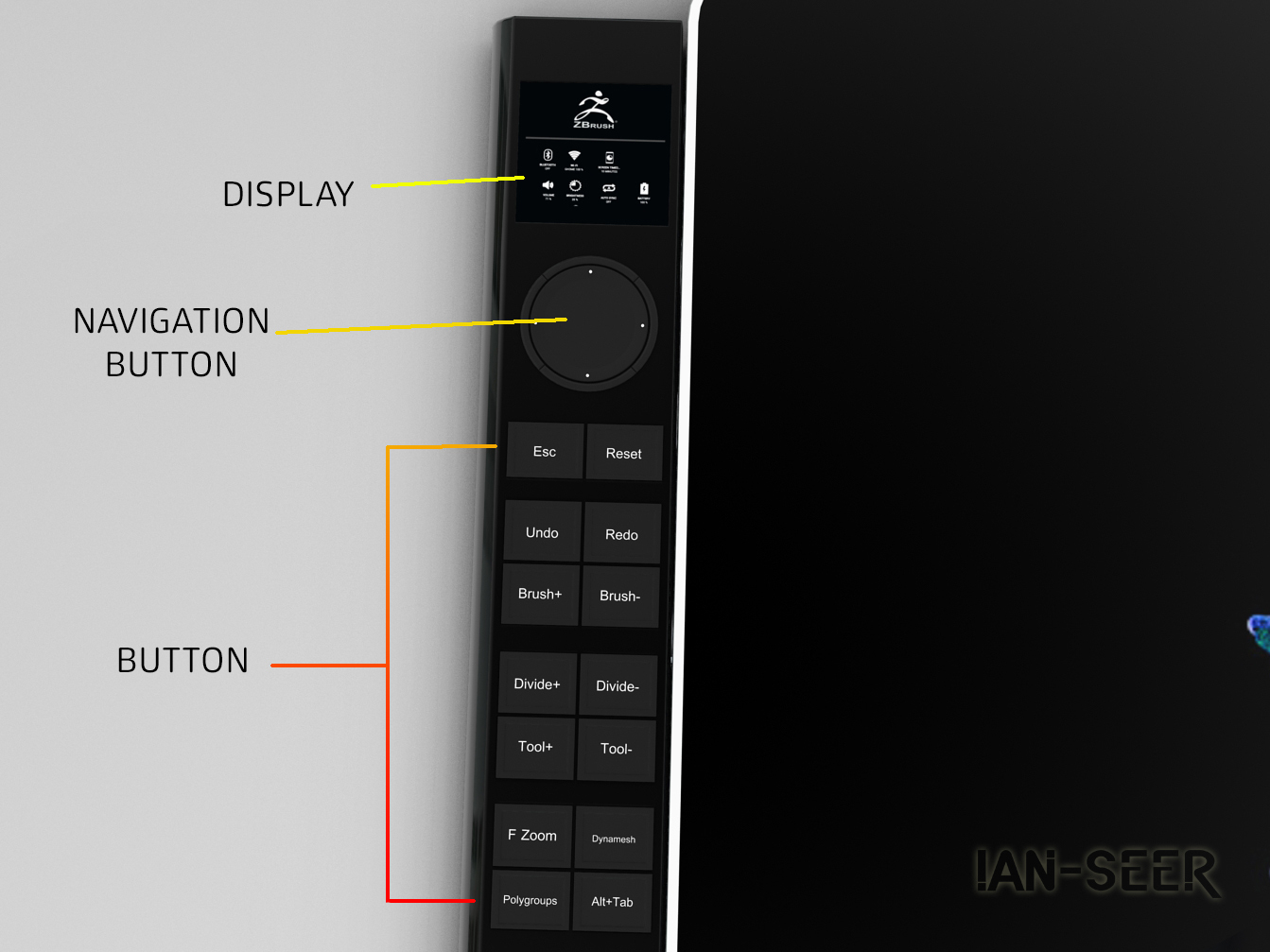 yes, you can change the LED light too and customize the screen, also the device it self are detachable, and don’t worry, it have usb slot and 3.5 mm too…

i know the design itself not perfect. I’m only try to give a depth explanation of what in my mind… it still can be improved. Give me your thought if there’s any idea are very welcome…

That’s pretty cool. I’d suspect you’d be better off with generic button labels as is sort of limits it, and you’d need to ensure it was very securely attached.

As an artist I can see the benefits of something like this.
Heck, I wonder if there was some way you could design it so it could also be detached. Connected via bluetooth maybe it could double as a smart remote for media.

That said, I doubt there is enough if a market for such a device unless it could be made universal to work on all 2 in 1s.

Thanks there… It is detachable… connected through usb port on the side of the device… The button label can be changed too to suit your needs.
at first. I’m thinking connecting via bluettoth too… but, it will need us to charge again and again… so, i prefer it’s connected to usb port

I also doubt there is enough market as it is, but it’s certainly a type of product that attracts a lot of attention.

Put one on the other side as well, and your tablet becomes a lovely gaming console. That would extend the potential market…

hahahah… thanks… great idea ,… maybe next time i’ll try a console button… and yes, your comment makes me wonder, with the design i created, how can we make to be universal for right and left handed too… still can’t figure it out

While I am no artist at all and don’t plan to be (even a stone has more talent than me) I have to admit, your concept looks really awesome! I second the suggestions to expand it’s usecase to other areas too, like gaming etc. It would be great if one can just configure the wheel and buttons himself for whatever he needs them…

Looking at the design - is there any special reason this “sidebar” is smaller than the tablet itself? If it was the same size and has rounded corners towards the V it might look even better.

Isn’t the Eve V too big to be used as a gaming console? From what I see it’s not exactly a great experience to hold a 840g + remote device while it being pretty big too (12.3’’ screen). This concept reminds of the Nintendo Switch while looks pretty awesome to me.

Well, I just used this scenario because it was mentioned earlier. I wouldn’t use a 12.3" tab either, but who knows

I like the idea! I think it does have a lot of potential. Having that said, I don’t think additional display would be possible.Custom keys, additional surface you can use without covering your field of view - sure, that’s pretty cool.

The question being: what’s a real world use for additional button strip. I would simply need examples, but not ones ending with “imagine the possibilities” or “etc” - simple examples, that take step-by-step approach and explain to a slightly interested but very much realistic person why he/she should be excited.

umm… i dont get it… what button strip u mean? at the bottom?

i guess the button strip you mean is the attached device on the image right? the real world usage :
if you do photoshop, you need can acess several shortcut quickly with this device. no need to use keyboard… you can draw more freely, on your lap, hanging the device with both of your hand, in the table.
if you know 3D sculpter… the software it self use a lot shortcut method. just start by undo and redo, how many times the artist need to click that… with this device it will more optimized the work method.

The idea shows promise. There has to be some mechanism to show the status of the bar, if it is attached but not communicating vs not attached, or whether there is some weak connection (something is blocking the connection from working properly). I don’t think that is a big deal.

umm… this is attached to the side through usb btw

As for the examples: I have my doubts that ultra mobile CPU with integrated GPU will handle Photoshop well, and even more any zbrush type program. So, while the use is real, it’s not really about V, imho.
Because the buttons can’t be easily renamed and only few would be usable everywhere, maybe using simple shapes would make the whole design more flexible. As in: the triangle can be set for one functionality, the double dot to another, the whatever to whatever… Hm.

@Konstantinos what do you think, brother?

Those renders look fantastic!
Proud to be a part of this amazing community.
I’m no expert on this subject, so I can’t really suggest anything, but I think you could label the buttons in a generic manner, say 1, 2 , and so on.
Basically @vithren 's idea.

agree! no problem if it will be using simple button shape as long there’s a gap between 2 row button maybe…
photoshop and zbrush? i used it alot in my sp3, not best experience as desktop… but i enjoy it using it with software button like tablet pro… and yes… many digital artist using it. for example they even create a site/blog : Surface Pro 3: What Runs, What Doesn't — Surface Pro Artist

thanks… me too proud to be exist in this amazing community

even without label it still useful enough i think

rolleyes whatever. I’ll wait for the benchmarks.