So had this Amazon notification today. I thought was quite humourous. 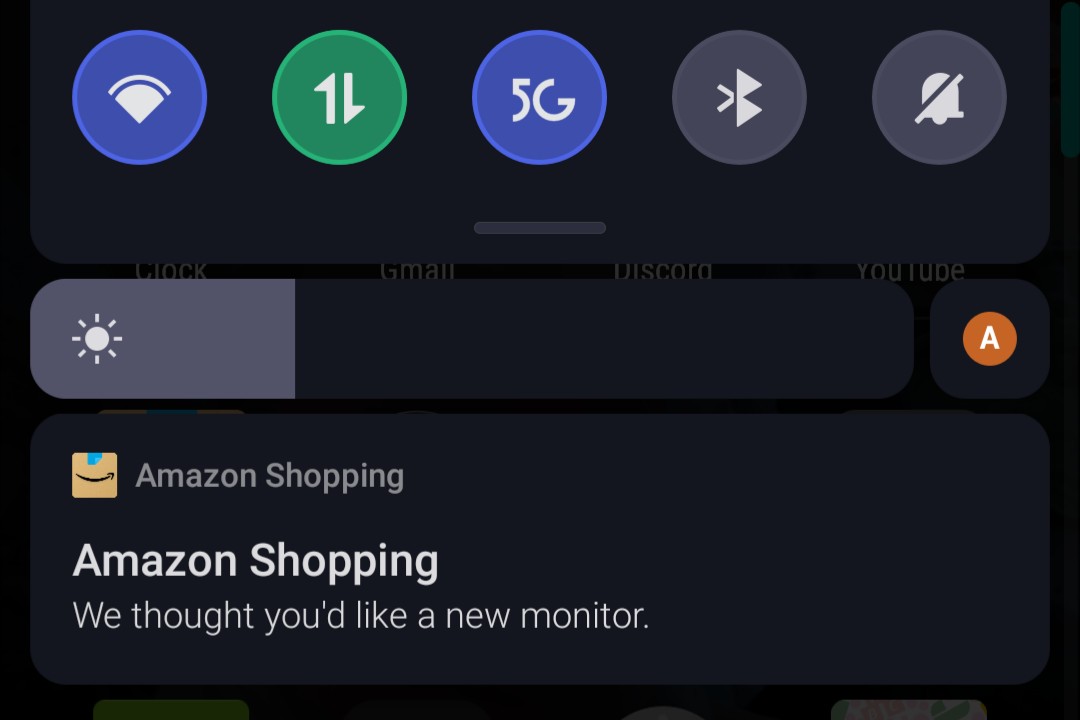 If I weren’t so dependent upon Google’s services, I’d be both irate and worried…

If I weren’t so dependent upon Google’s services, I’d be both irate and worried

With Google services, and Facebook. You can actually customise how the ads work. I like to delete all my ad data now, and again to keep the ads on their toes! It’s amazing the difference in Ads you receive afterwards.

I go a lot further than that. I use uBlock origin, NoScript on Fx, Blokada on my Android phone, several other things.

Most of the stuff I was referring to, though, was in my Google Feed on my phone - they are presented as stories, versus advertising, but the idea is the same - Google knows what I’ve been looking at and where I’ve been going…

While it mostly doesn’t block Google from getting my information, I’ve been using NextDNS to block all ads and ad tracking on my iPhone and other mobile devices, and it has worked pretty well. My favorite part about it is that it blocks ads across all my phone, even within mobile apps that usually have a ton of ads. I originally wanted to install something like a Pi-hole, but my ISP-provided modem is locked down by my ISP and doesn’t allow many adjustments required to use Pi-hole. I guess I’ll eventually change it, but for now, NextDNS and many other online DNS services work well enough.

In the same boat - the AT&T Residential gateway for my fiber connection is required for ‘authentication’ purposes, so I cannot connect my ONT to anything but the RG.

But, there are workarounds, if I set up a PieHole system correctly - which I plan to do sometime this year.

In the meantime, Bokada does a wonderful job on my Android devices at blocking advertising permanently - even in games. For desktop, a variety of things, but that also includes using a Mesh that I’ve set up with custom DNS (CloudFlare) as well as all kinds of things to protect my desktop and hte VMs that I run.

I’ll be honest, I don’t worry about the data that is collected that much. Once upon time I would appear “off the grid”, but these days I don’t care to much. Which may seem ironic, but there it is.

The only ads I go out of my way to block are YouTube ads, because they are actually irritating.

And keep getting progressively more annoying. I didn’t used to block them, but when they started interrupting videos in the middle of playing them, I took action.

Specifically, for Fx I installed Enhancer for YouTube, which has a ton of features, but the main one I care about is the blocking of ads for YT videos - because I tend to watch longer videos like from LTT, JTC, GN and various science related sites like Veritasium, Smarter Every Day, and plenty of random videos from TKOR, and reviews on off-beat items like those from Project Farm, and anything Hoonigan auto related lol.

I didn’t mind the initial video before video play would start - but I’m not paying YouTube $12 USD / month to get advertising free videos. Same way I’m not paying for YT Music for the ability to play songs in the background. Nope. I’ll just upload (from my computer) or download (from my YT Music library) what I need to to my phone on a daily basis, instead.

I’m especially irate about YT Music - Google Play Music was awesome. YTM, not so much. And some of that angst has carried over into my being fed up with YT in general. So, ads begone.

I 100% agree with you. I think the main issue with Google music was not so many people used it as intended so they Integrated it with YT, and created YT music.

I find it extremely frustrating that when Google music closed down it disabled the default music player for Android.

After this I started using VLC again. Which is ironic, because I’m using it for local audio files.

YouTube ads are just obnoxiously annoying. If listening to music you will get an ad every song. If watching a highly rated streamer. I would be interrupted several times, and that’s also excluding the channel sponsors.

This results in way to many ads. Just starts getting annoying seeing these ads.

Imagine you want to study and set up a playlist with relaxed music and then you get an ad ever 5 minutes going for 15s to a quarter hour.

Try sponsor block, it can also remove intros/outros (and other things) and it jumps these LTT ads.
At first i didn’t mind the small LTT ads, but after i watched some videos and have seen them a few times it gets rather annoying.

I can see this as highly frustrating. I play music for my baby boy through YouTube. He’s currently got a thing for John petrucci’s Happy song, but before, and after the song you can guarantee a loud obnoxious ad plays.
Thus leading to the use of a Ad blocker.

Try sponsor block, it can also remove intros/outros (and other things) and it jumps these LTT ads.

I don’t mind the sponsors so much, because that’s how a lot of YouTubers make money, and sometimes can offer discounts for viewers.

Even more off topic: Oh, just realised your profile picture is of The destiny! What a great series! Shame it only lasted 2 seasons, and ended on a cliff hanger.

Even more off topic: Oh, just realised you display picture is of The destiny! What a great series! Shame it only lasted 2 seasons, and ended on a cliff hanger.

Oh yeah, a reboot would be really cool.

I wasn’t even close to my upload maximum on GPM. But one minor annoying thing was that when I uploaded FLAC files of CDs that I ripped myself, it converted them to lossy .MP3s.

I did a download of all the uploaded music, .ZIPped up it came out to only 22 GB, but it’s also not complete - and I was an early adopter of getting my music library moved to YTM as soon as it was made official that GPM was going away.

I’ve not yet tried uploading to YTM because of everything else that is going on, but I found that, just like with GPM and the GPM Desktop Player, someone (probably the same guy) has developed the YTM Desktop player as well.

I plan to give it a go soon and test it out.

I’m with reign, I don’t mind the sponsors - they are fine (and with LTT in particular, and also Donut Media, their sponsor segments (and the segues to them) can be quite entertaining).

It’s the YT ads that don’t support the channels that I block. And Enhancer for YT does it brilliantly.