If I was asked to describe the 2017 Microsoft Pro in one sentence I would say it is a “Blow to progress from conservatism or greed, or both” It is clear from the first seconds of handling the new device that the “don’t fix it if it ain’t broken” approach was taken by whoever commissioned and approved this project. Let’s look closer, shall we.

All tests were done indoors.

Typical battery life under such conditions was 5:00h to 5:30h 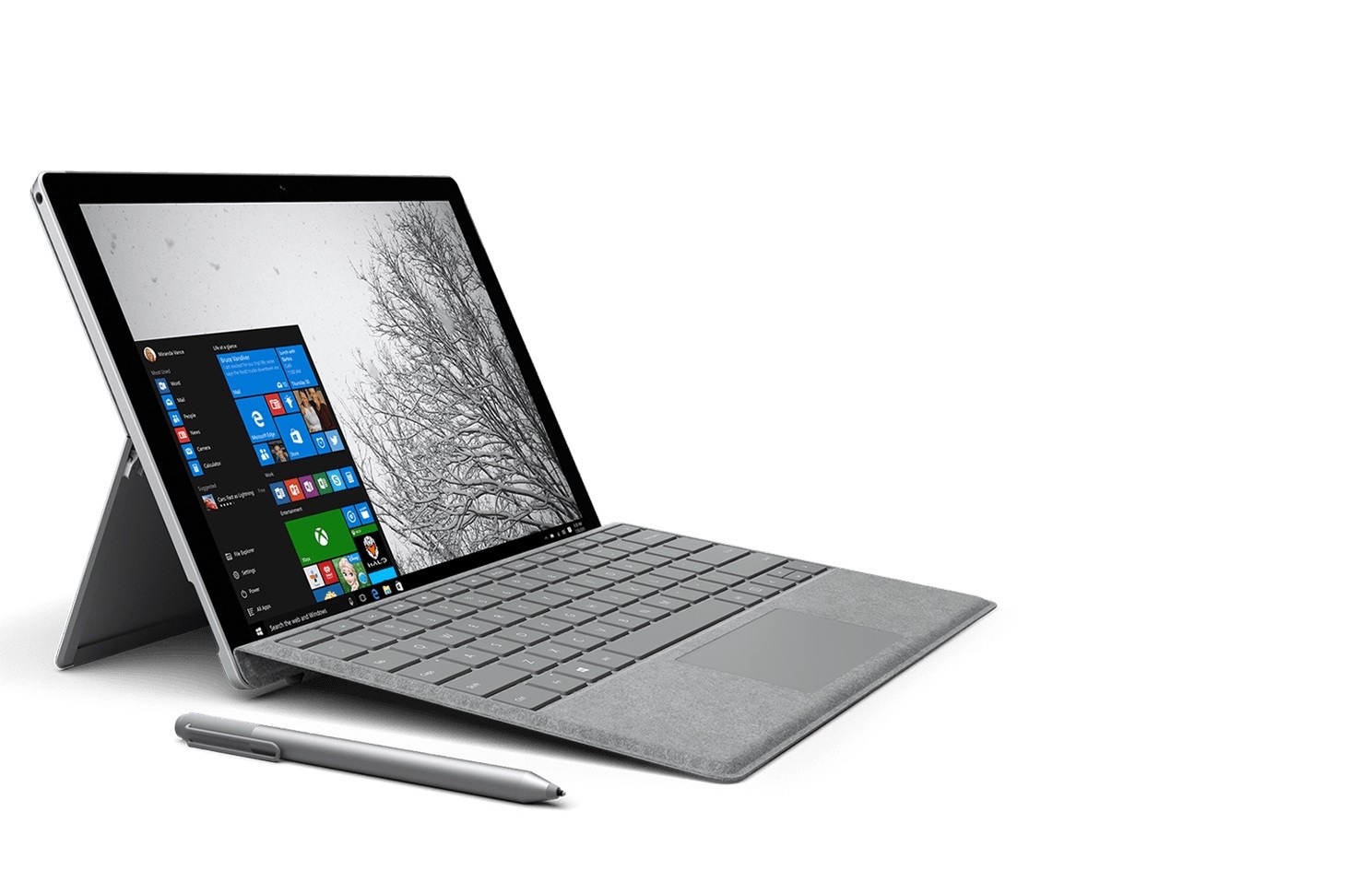 That is actually a Surface Pro 4 with its available Alcantara keyboard!

Please don’t get this wrong, I still think that 2017 is a great solid device with nice improvements! In fact it is what SP4 should have been originally back in 2015! It works well, it is powerful and light and it still beats everything out there except V! And if one is in dire need on new 2 in 1 or feels he/she cannot wait for V then I would certainly recommend buying it! However if you are thinking of upgrading from SP4, I would recommend getting just the Alcantara keyboard as there is such a minimal difference other than an extra hour of run time!
What 2017 Surface Pro really lacks in is the innovation excitement for previous generations! There is no pushing of envelope. I highly doubt that the talented Microsoft engineers that brought us four previous generations of Surface Pro were satisfied by the progress of the 5th generation Surface Pro. I really hope that deep in their skunk works lab there is a real New Surface Pro 5 (6?) is being cooked as we speak!

Please be sure to watch my video reviews!
The Arrival - 2017 Surface Pro Unboxing Video

If you want to read the detailed benchmarks, I would recommend checking out this article 2017 Surface Pro Benchmarks by LAPTOP Mag

And according to iFixit, Surface pro (5) is almost impossible to repair - repairability score 1 (Repairability 1 out of 10 - 10 is easiest to repair). 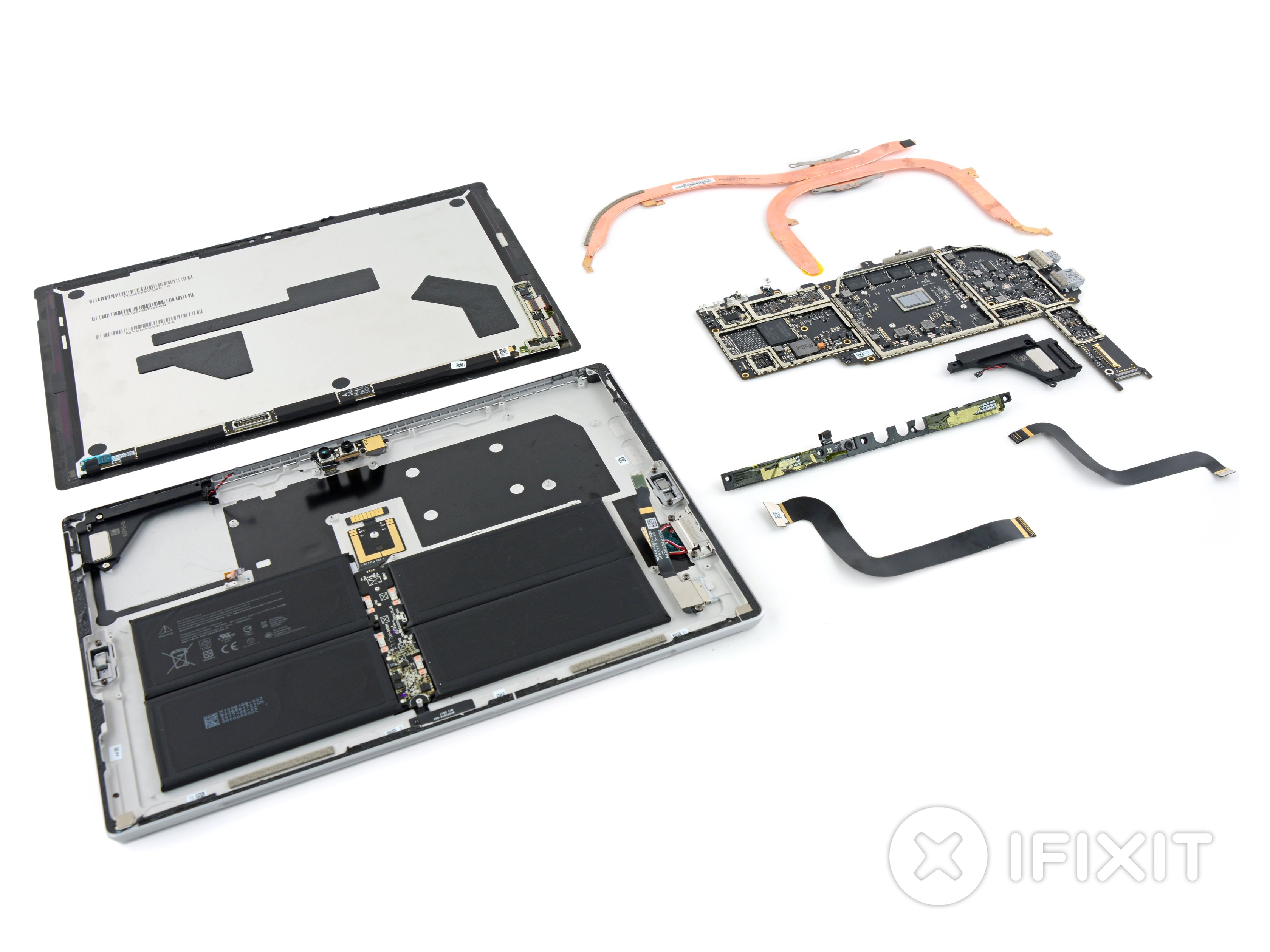 @mirv Thanks for sharing this. It was an interesting read.

I am going to quote iFixit:

“All told, it’s nearly identical to its predecessor—aside from ditching the last remaining upgradable component, the modular SSD. Yeah, Microsoft impressed us—by being way worse than we expected.”

I think that this just further proves the suspicion that 2017 Surface Pro is not new at all, but a rather minimum viable update of hardware from Surface Pro 4, with just enough oomph to bring up to the top of the sales charts again.

Yes - that’s one thing I rally do not like with Microsoft - their battery time lies … Apple is way better with realistic numbers.

Yeah, unfortunately this is the sad state of affair for most Windows machines and their battery estimates. The manufacturers are so full and proud of themselves that I would not be surprised if they actually believe the claims they are making!

I have a suggestion to them, they should help EPA change its car fuel consumption testing and test the consumption in a flat vacuum tube going 5 miles per hour rolling on narrow metal track…

Awesome videos! You should o more of those!

I’m actually quite concerned about the battery life on the V, as we are using the same generation of platform architecture (Kaby Lake), same display, similar battery capacity, so the battery life would’ve been similar, no?

Totally valid concern, however here is an example
13" MacBook Pro w/ 3.3 GHz Intel Core i7 Dual-Core and 500 nits 2560 x 1600 Retina Display manages fully realistic 9-10h on single charge with 49.2-watt-hour battery. MacBook Pro 13-inch - Tech Specs - Apple
How do they do it? Careful selection of components (other than CPU, there is a LOT of them) and intelligent hardware and software level power management. Like a fine tuned engine it makes more power with less petrol. From what I’ve seen from pre-production Vs, they managed to keep the overall energy draw quite low for the routine tasks like watching videos. music and using office products. I am really looking forward and hopeful

Thanka man! I will be sure to make more videos in the near future

Cheers for the review, @Alexandr_Smirnov - especially regarding the battery. The SP4s are going for quite a good deal at the moment where I am, with full bundle, not so hesitant to get it for the missus now if battery life isn’t much better on the newer one.

Apple and battery has a long friendship history. My ipad mini 2 lasts. And I kid you not. 6 hours of video playback at 720! That said. After doing some more thing. And 1% drops in 5 hours ideal. And it’s old. It was bought the year ipad mini 2 was launched

There are other things to consider: A loose ball at my kids’ basketball practice knocked my SP4 on the floor shattering the display. 9am the next day I walked out of a MS store with the replacement in hand.

Turn this exact same scenario into a V? Where am I sending it for a replacement? What is my downtime without a tablet because of that? (I’m not into buying a spare for the “just in case” to allow for 2, 3 week turn around times).

I can buy a Surface pretty much anywhere, today, and I’m up & running in a couple hours.

I also like magnetic power supplies: I’ve tripped over a cord more than once over the years just to have a laptop go flying. Even had a couple power ports re-soldered to motherboards on a couple high end laptops from internal damage. USB-C charging moves me (personally) backwards when that’s a power port also. It’s honestly been too long since I looked at how the V charges to remember how it gets its juice. +1 Surface- magnetic power.

I use peripherals on 3 desks. 6 USB DisplayLink display adapters, 1 USB hub, 1 Surface Dock on each desk. Plug in the power, and i’m up with everything plugged in. What’s the V counterpart? +1 for Surface there too.

My point being repair turnaround time, end to end user experience solely based on work preferences wound up stopping my pre-order. Until it’s in a store where I can feel & contrast keyboards, mice, stylus I remain hesitant with giving V a thumbs up.

Surface battery life really does suck!!! I’m actually looking forward to the day when a class action gets introduced to hold hardware manufacturers responsible for real world reporting of battery life (my mini soap box opinion with that).

I totally hear you on the replacement and down time. Surface is a mature product backed by a huge parent and sold at significant premium. If for $2-$3K + the cost of the care plan with ADH MS didn’t make it at least painless, it would be a huge shame. With time I think EVE can get their service to a similar or even better level. I for once am a big proponent of the in-house service plan with ADH (accidental insurance). Also I think with time we can center EVE service around advance shipment of replacement devices with an option to upgrade the shipment to something like next-day if needed! It is all in consideration and for now we just need to take one step at a time. So yes, atm V is more of an enthusiast device where one is okay with some potential waiting, but wants a no compromise device.

Surface battery life really does suck!!! I’m actually looking forward to the day when a class action gets introduced to hold hardware manufacturers responsible for real world reporting of battery life (my mini soap box opinion with that).

Sign me up for that! It is a freaking shame that such a nice device sucks in the key aspect for mobility! What bothers me even more is this:
SP3 i7 4th gen - I normally got around 6 hours of use
SP4 i7 6th gen - I barely got 4 hours of use on good day
SP(5) i7 7th gen - I get about 1 hour more than SP4!!!
So in three plus years MS has regressed in battery life despite everyone crying that it sucks!
This is really sad
When 2016 MBP got bashed for battery life, Apple dropped everything and got their act together. You get 8-10h out of one no problem. MS on the other hand for 2017 increased battery size by ~25% and their pathetic claims by 44% from the previously delusional 9h

And regarding the docks just use the USB C or thunderbolt dock of your choice.
You have a point with the repair service but that is being figured out.

Next Surface is gonna have 7h battery life and advertised with 24 hours.

I DID NOT KNOW SUCH THINGS EXISTED! Sir (or madame) I am indebted to ewe. This makes me feel a lot better about the USB - C charging, not that I regularly trip on my power cables.

The problem with the current ones that are out there is that they appear only to do 2.1A at 5V charging MAX (10.5W I believe) which is a lot lower than full speed. V will be shipped with an 18W charger.

There was a post discussing a new type of magnetic connector that could charge a device at higher rates.

Correct! A hub would do the trick for most peripherals. Maybe not the most elegant solution, but definitely cheaper

However this doesn’t appear to have shipped from a search in Google. Disappointing.

V will be shipped with 45W charger as I know, originally was planned 27-30W one.

I have ordered these. I haven’t received mine yet but the reviews of those that have look very positive. VOLTA Charger: 1 Cable To Power ALL Your Devices | Indiegogo